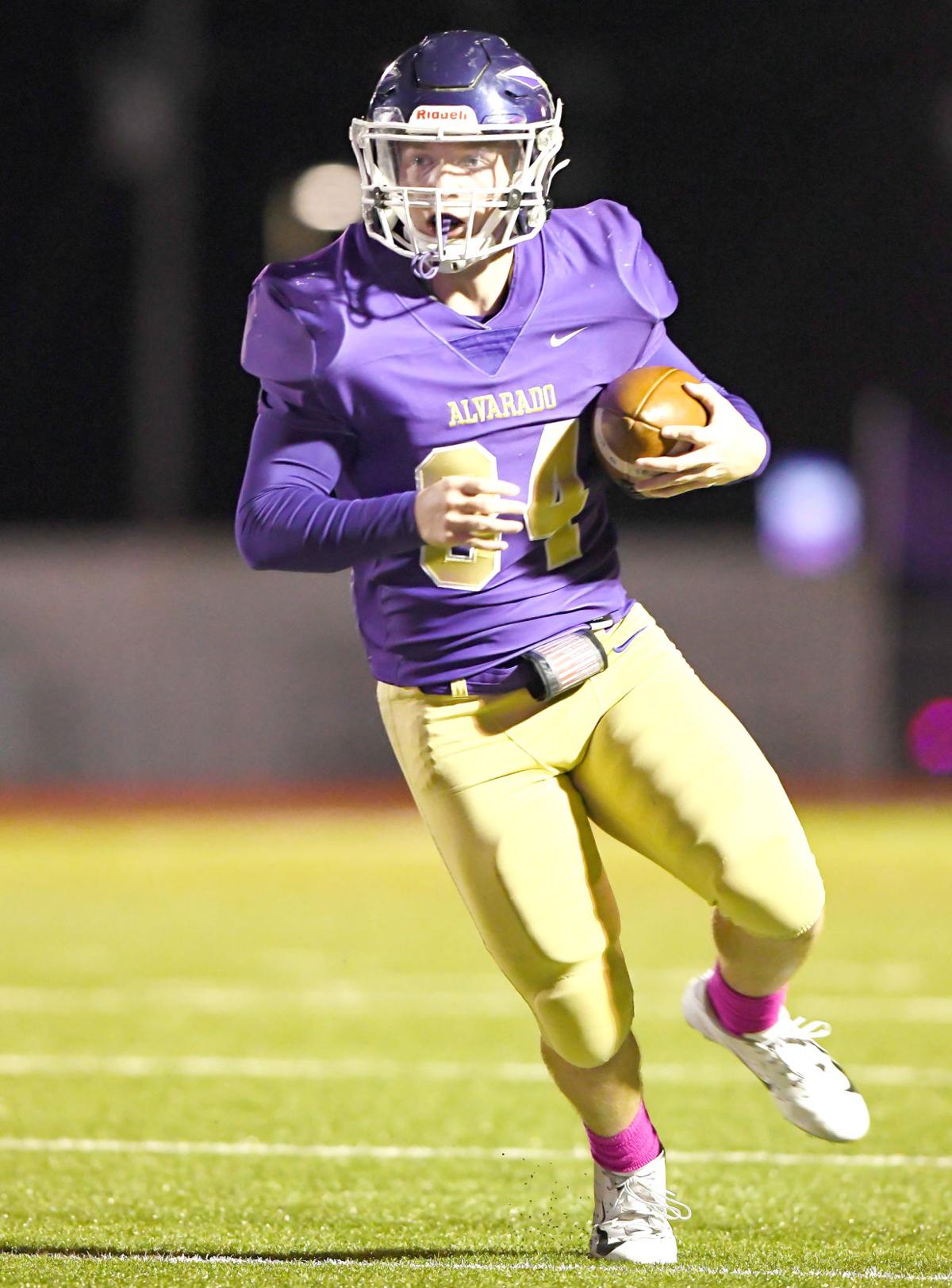 Alvarado senior running back Colby Sampson is averaging 234.4 rushing yards per game, including setting a new program record in week 2 with 394 rushing yards against Decatur. Sampson is the latest in a line of dominant Alvarado running backs, helping the Indians’ offense have one of its most productive seasons ever. 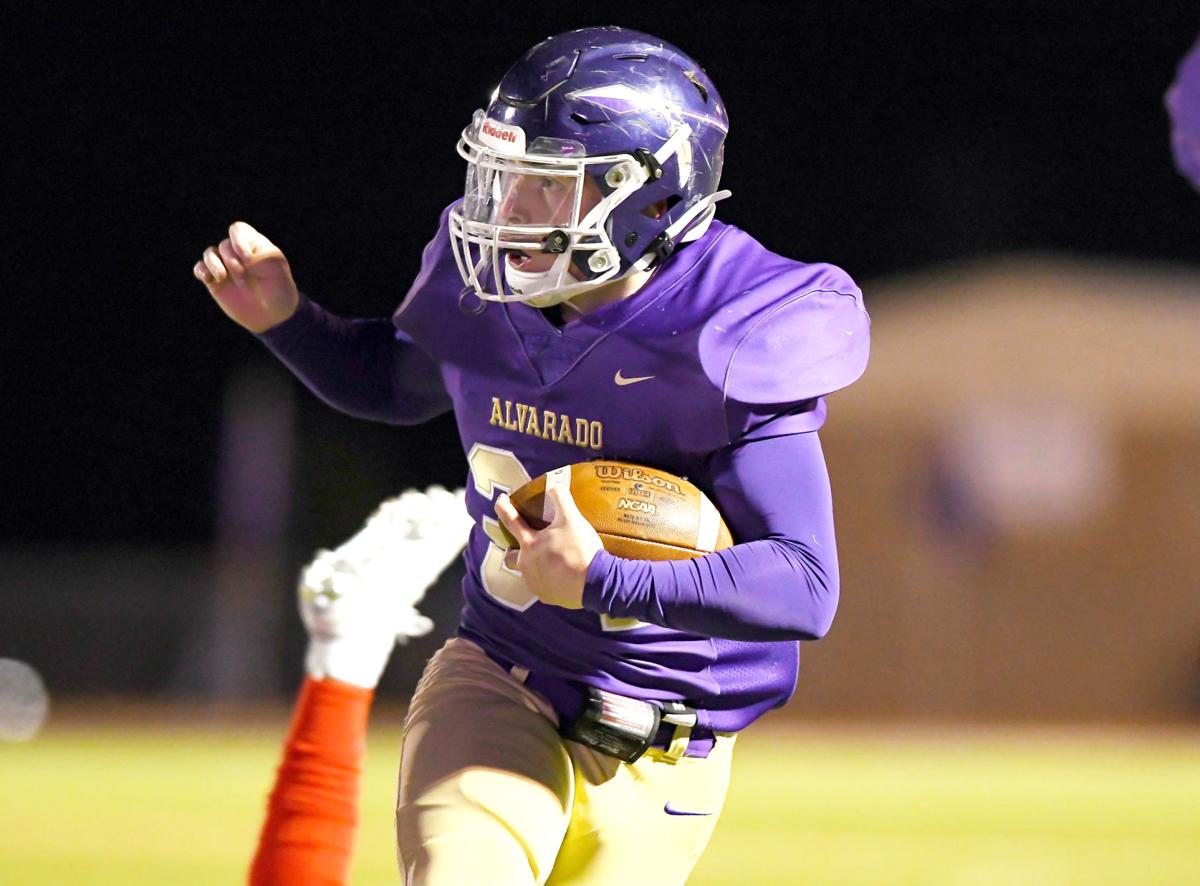 With tremendous team blocking in front of him, Alvarado’s Colby Sampson is approaching a rare 2,000-yard rushing season.

Alvarado senior running back Colby Sampson is averaging 234.4 rushing yards per game, including setting a new program record in week 2 with 394 rushing yards against Decatur. Sampson is the latest in a line of dominant Alvarado running backs, helping the Indians’ offense have one of its most productive seasons ever.

With tremendous team blocking in front of him, Alvarado’s Colby Sampson is approaching a rare 2,000-yard rushing season.

ALVARADO — Throughout Jeff Dixon’s 15 years as Alvarado’s head coach, his teams have consistently featured a stout rushing attack, but the Indians and senior running back Colby Sampson are on pace for one of the program’s most productive seasons ever.

Through seven games, the Indians are averaging 347 rushing yards per game as a team — the most Alvarado has averaged in the past decade, including the Indians’ march to the Class 3A state title game in 2011 when Wayne “The Train” Onderdonck amassed 2,887 rushing yards in 16 games.

Sampson also averages 2.3 touchdowns per game and shows his durability by averaging 29.8 carries per game. Every time he carries the ball, he picks up nearly eight yards per carry (7.9).

“We’ve had some backs throughout the years that have had great seasons and Colby’s right there with that,” Dixon said. “Colby is rugged, physical and has good size, which allows him to carry the ball as much as he’s doing. Typically when we’ve had those guys, we’ve had a good year as a team. I’m proud of him. Colby is a workhorse and he continues to show it’s not a fluke.”

In a 49-42 loss in week 2 against state-ranked Decatur, Sampson established a new Alvarado single-game rushing record with 394 yards on 43 carries. He broke the record previously held by Tony Mears, who rushed for 387 yards vs. Red Oak in 1980.

Mears was one of the first dominant running backs in Alvarado program history. In 1980, Mears rushed for 1,832 yards and did most of his damage in the first half of games before being subbed out.

In a long line of highly productive runners, Sampson has taken his opportunity to be the feature back this year and run with it — usually right over defenders.

After being a JV move-up midway through his sophomore season, Sampson earned a back-up role entering his junior season, where he played behind Andrew Barajas last year.

Barajas rushed for 1,685 yards and 23 touchdowns on 164 carries in nine games to earn 2018 All-Johnson County offensive player of the year honors.

As productive as Barajas was, Sampson took advantage of every one of his 48 carries last year as he rushed for 530 yards, an average of 11 yards per carry, with seven touchdowns. His limited role was an indication of what was to come for his senior season.

Sampson said watching and learning from Barajas last year helped him prepare for being the feature back this year.

“I’ve kind of replicated his mentality and the hard work ethic he has, in a way,” Sampson said. “He always went hard and always had a good mindset during the games and during practices.”

Barajas’ big season in 2018 was one of several productive seasons for Alvarado running backs over the past few years.

But what Sampson and the Alvarado offense have done through the first seven games this season is about as good as it gets.

“I am extremely pleased on where we are,” Dixon said. “Colby is a phenomenal young man and a good football player. Our fullback, Isaiah Hernandez, and all of our linemen, along with quarterback Josh Syrus and our receivers as a unit and tight end, it all goes hand in hand. We’re throwing the ball with some efficiency when we want to. Our fullback run game has been pretty stout. Isaiah’s blocking has been outstanding along with the hogs up front. Our total offensive production is probably as good as we’ve had since I’ve been here. It’s encouraging.”

As dominant as Sampson has been with the ball in his hands, he gives all credit to his teammates for his incredible success so far.

“I’m just doing my job, basically,” Sampson said. “The O-line I have is great. I’m getting to the second level every play, and I take it from there. If it wasn’t for my O-line, I wouldn’t be able to go anywhere. I don’t take full credit for that, it’s a whole team thing and it takes everyone doing their job. They all play key factors.”

“First of all, not everybody can do what we do,” Dixon said. “Most programs don’t even try to do what we do offensively because there’s so much involved up front. They want to use excuses like we don’t have those kinds of linemen. Our center weighs 185 pounds. It’s about execution and taking pride in their steps and knowing their assignment. They may not be the biggest, but they’re extremely physical up front and they’re rugged.”

While Sampson is highly complimentary of his offensive line, he also said what Hernandez does at fullback is a huge component of his success.

“Isaiah is one of the biggest team players with how he contributes,” Sampson said. “He blocks the one guy that would be able to stop me every play right off the bat. He deserves all the credit because if it wasn’t for him, I definitely would not get anywhere. Because of how good of a blocker he is, he doesn’t get as much running reps as he deserves. If what we do works, we’re going to keep doing it. And he plays a major part to that. Every time he does touch the ball, you can see he’s going 100 percent all the time.”

“Isaiah’s play is really what makes us go,” Dixon said. “When we have a good fullback, that really makes us go. He leads the way 99 percent of the time as a lead blocker for our tailback. He is pretty vicious. He’s a talented blocker. He and our tight end play with Peyton Alvey; those two guys have been doing outstanding.”

“Peyton’s basically another blocker on the line so he’s a hog with us,” Price said. “Isaiah is really good. I think he has the most stingers on the whole team because he just throws his body around and takes people out.”

While offensive linemen rarely get much of the spotlight, the Indians’ “hogs” — as they refer to themselves — simply take pride in doing their job and helping Sampson in what’s shaping up to be an historic season.

“It feels amazing,” Price said. “When Colby does well, I feel like I’ve been doing really well. He was second in the state in rushing at one point and that makes us feel like we’re doing our job.”

Entering week 8, Sampson was 10th in the nation and third in the state in total rushing yards.

“It means we’re all doing our job,” Jimenez said. “They always say hard work pays off, so I guess that means it’s working. We work hard in practice and then we do well in games.”

“It makes us feel like we’re doing our job,” London said. “If he’s able to do that, it means we’re doing something right.”

With three regular-season games remaining, Sampson is on pace for 2,344 rushing yards — a rarity in a 10-game season.

Sampson’s blockers are hoping they can help their tough-nosed runner reach that mark.

“It makes it a lot more fun for us as linemen to have this success,” Cappers said. “[A 2,000-yard season] gives you something you want to keep working for. It would be a great accomplishment for him and us with how hard we’ve worked.”

“That would be amazing,” Price said. “It would be a big goal. Whatever he needs to get there, we’ll help him.”

Alvarado’s offensive line all described Sampson’s running style with many of the same words.

“He doesn’t really try to do any highlight moves or juke anybody out,” Watson said. “He’d just assume run over you instead of run around you. He’s a tough runner.”

“He’s a hard runner,” Price said. “He goes for the contact. He’s always breaking arm tackles. Even when he’s in a pile with four people trying to tackle him, he just keeps going and working hard.”

“He’s just a hard runner,” London said. “He runs really hard every play. That’s what we tell him in the games is to just keep running hard.”

Watson said they even surprise themselves sometimes with the success they have in constantly dominating the line of scrimmage.

“Sometimes it’s surprising,” Watson said. “Against Carter, those were some really big guys, and I’m not that big of a guy. But the way we work together it allows us to be able to fight against these other guys who might be bigger.”

For London, a three-year varsity starter, he’s proud of how far the team, but particularly the offensive line, has come since 2017, when inexperience and inconsistency up front held Alvarado back in a 3-8 season.

“I’m really proud of how far our offensive line has come,” London said. “It feels like we came from nothing, honestly. We were not good my sophomore year. I feel like we’ve come a long way.”

Alvarado hasn’t won a district championship since 2011, but entering week 8 the Indians sat alone in first place in District 8-4A Division I at 3-0.

“A district title would mean a lot,” Price said. “We’ve been working for it since we were in junior high. Our junior high coaches told us we were special and that we’d be able to accomplish something. Now we’re seniors, it would feel amazing. We’ve got to keep that hard work going and try even harder from here on.”

“We want it bad,” Jimenez said. “But they always say during practice, don’t think about the future, just take it game by game and work hard. So that’s what we’re doing.”

“We can’t get satisfied and we can’t get big-headed,” Sampson added. “We just have to keep playing and practicing like we normally do. We have to take it as if our record is 0-0 every game and like the score is 0-0 every play, and just play to the best of our ability.”

Sampson and the Indians return to action at 7 p.m. Thursday against Dallas Hillcrest at Franklin Stadium in Dallas.