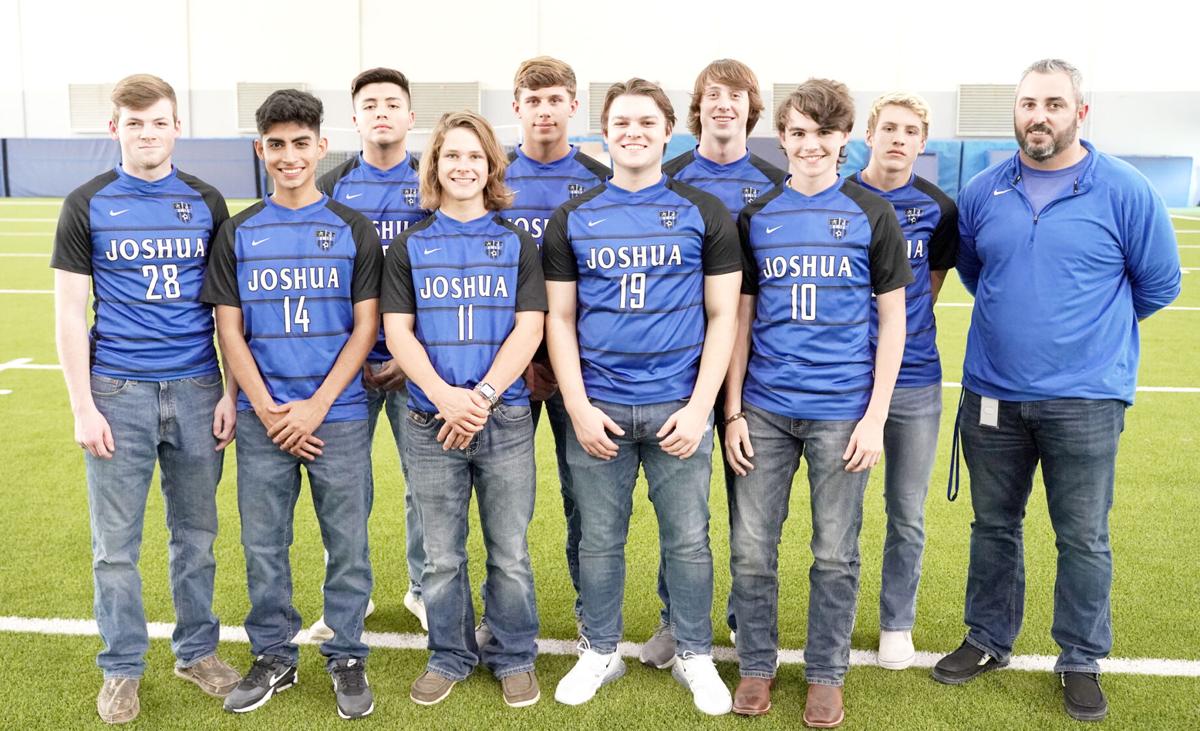 After posting a county-leading 18 wins in addition to being the only boys soccer team to win in the playoffs, the Joshua Owls are strongly represented in the Classic Chevrolet Buick GMC of Cleburne 2021 All-Johnson County boys soccer team and superlative awards.

The Owls garnered five superlative awards while the only other team to earn multiple all-county superlative recognition is Burleson with two.

Leading the way on the 2021 All-Johnson County boys soccer team is Joshua senior Griffin Gayler as the MVP for a second consecutive year.

Gayler scored 20 goals and netted 18 assists in playing a pivotal role in the Owls’ 18-7-1 season that included a second-place finish in a brutally tough District 14-5A.

“Griffin is a solid player in so many parts of the game,” Joshua Coach Thad Goodling said. “When he decides to attack, he creates so much for the team, whether that be creating chances for himself or creating chances for others around him. His speed and vision when around the goal is what makes him such a great player. The past few seasons we have been able to see Griffin grow into the player that he is today. Griffin has been an integral part of what we have been doing this past few years and has really set the bar for future Owls to strive for as an attacking player.”

The 2021 offensive player of the year on the All-Johnson County team goes to Burleson’s Caleb Yauger, who recorded a county-leading 35 goals to go along with four assists as he helped the Elks to a 14-9 season and a playoff appearance.

“Caleb had an amazing year for us,” Burleson Coach Ryan Kiene said. “He has a knack for finding a way to put the ball in the back of the net. Caleb’s ability to change his runs throughout the game is what made him so lethal this year. I believe teams had a hard time matching his speed and his ability to make a run, reset and change his run.”

It is — impressively — Yauger’s third straight all-county offensive player of the year accolade after he scored 20 goals as a junior in 2020 and 16 goals as a sophomore in 2019.

Representing the Alvarado Indians in the all-county superlative awards is junior Isaiah Soto as the defensive player of the year. It is the second consecutive superlative honor for Soto on the All-Johnson County team after being the newcomer of the year in 2020.

“Isaiah is a relentless defender and an all-around phenomenal player,” Alvarado Coach Aaron Estes said. “He is quick, strong, confident with the ball at his feet, and makes sound decisions while anchoring our defense. Isaiah was an integral part of our team setting a record for fewest goals allowed in a season and tying the record for clean sheets in a season. Above all, Isaiah is a young man of great character and a fantastic leader of our team.”

The midfield player of the year is a shared honor between Cleburne sophomore Anthony Terronez and Joshua junior Riley McFarland.

Terronez was a bright spot for Cleburne in 2021 as he registered six goals with three assists and was a constant threat for the Yellow Jackets.

“I think just his overall athleticism and skill lead him to that award,” Cleburne Coach Jose Salazar said. “Every time he would get the ball he would be a threat to the opposition. He played a big role in our attack this year. ... If he keeps it up he definitely has a bright future in this sport beyond high school.”

McFarland was key in the middle for the Owls, racking up eight goals with three helpers to go along with high-IQ play switching between offense and defense.

“Riley was a player that we switched to center back when we were down players because of injuries,” Goodling said. “But we had to move him back to the midfield because we were struggling with winning the ball early and having someone in there to orchestrate our attack and organize our team defensively early. Riley is the player that allows us to have time to work our attack and keep our defense connected to our attack. As a player, he is extremely smart on the field with his positioning and his tactical awareness to find balls into our forwards. He also had four game-winning goals for us late in the year that allowed us to be in the position we were late in the year.”

For the third year in a row, Joshua’s Mario Miranda is the All-Johnson County goalkeeper of the year. Miranda finished his stellar prep career by posting 12 shutouts and boasting a .606 goals against average.

“Over the last four years I cannot count the number of times Mario has saved our team with an amazing save,” Goodling said. “When you have a player of Mario’s caliber, it allows the defense to play with more confidence and be more aggressive when they are challenging to win the ball back. Mario has been one of the best high school goalkeepers I have seen in my career and we have been lucky to have him on our side. As a player, he is one of the smartest and most technical players I have been around.”

The All-Johnson County utility player of the year is a split award between Burleson’s Anthony Mohammed and Joshua’s Deaven Connelly.

Mohammed had a solid season statistically with five goals and 13 assists but his impact for the Elks went far beyond numbers. It’s also the second consecutive season Mohammed is the all-county co-utility player of the year.

“Anthony was our true leader on the field,” Kiene said. “The question is, ‘Where did he not play for us this year?’ Anthony started out the year as a forward and from there made appearances throughout the midfield during tournament season. Once district started, Anthony was our player that could make things happen, whether it was in the midfield or as a defender. Multiple games he stepped in at outside back, and when we had to travel to Legacy for a must-win game he slid back into a center back role and led the guys from the middle of the field.

“The fact that Anthony was able to play in so many positions allowed us to change our looks each game, each half or just when we needed a spark. When you have that kind of player, you’re able to assess an opponent and find out the best place to put him for his success and the team’s success.”

Despite joining the soccer team late after helping Joshua basketball to the playoffs, Connelly proved to be an integral piece of the Owls’ success on the pitch by filling whatever role was needed on essentially a game-by-game basis.

“Deaven played attacking mid, defensive mid, center back, outside back, forward, and he even stepped in the net as keeper this year for us,” Goodling said. “Deaven was one of our captains this year as well. Deaven has been a player that puts this team first and will do anything that the team needs. What makes him so versatile is his knowledge of the game and how technical he is and how mentally tough he is. He is one of those guys that will never give up and he accepts his responsibility no matter what it is that game.”

Rounding out the 2021 All-Johnson County boys soccer superlative awards is Goodling as the coach of the year for a second consecutive season.

“It is a great honor to be all-county coach of the year for the second straight season,” he said. “We have some great teams and coaches around here which makes it special to receive this honor. Seeing all of the new coaches coming into this area shows that we are growing as a soccer community as a whole.

“I have to give credit to my family, team and Coach [Will] Walker as they are the ones that put their trust in what we are doing. It has been a great honor coaching these players this year and seeing them grow into not only a great soccer team but also great individual young men.”

The All-Johnson County teams and superlative awards are selected by the Times-Review based on all-district results, player statistics, team success and coaches’ nominations.