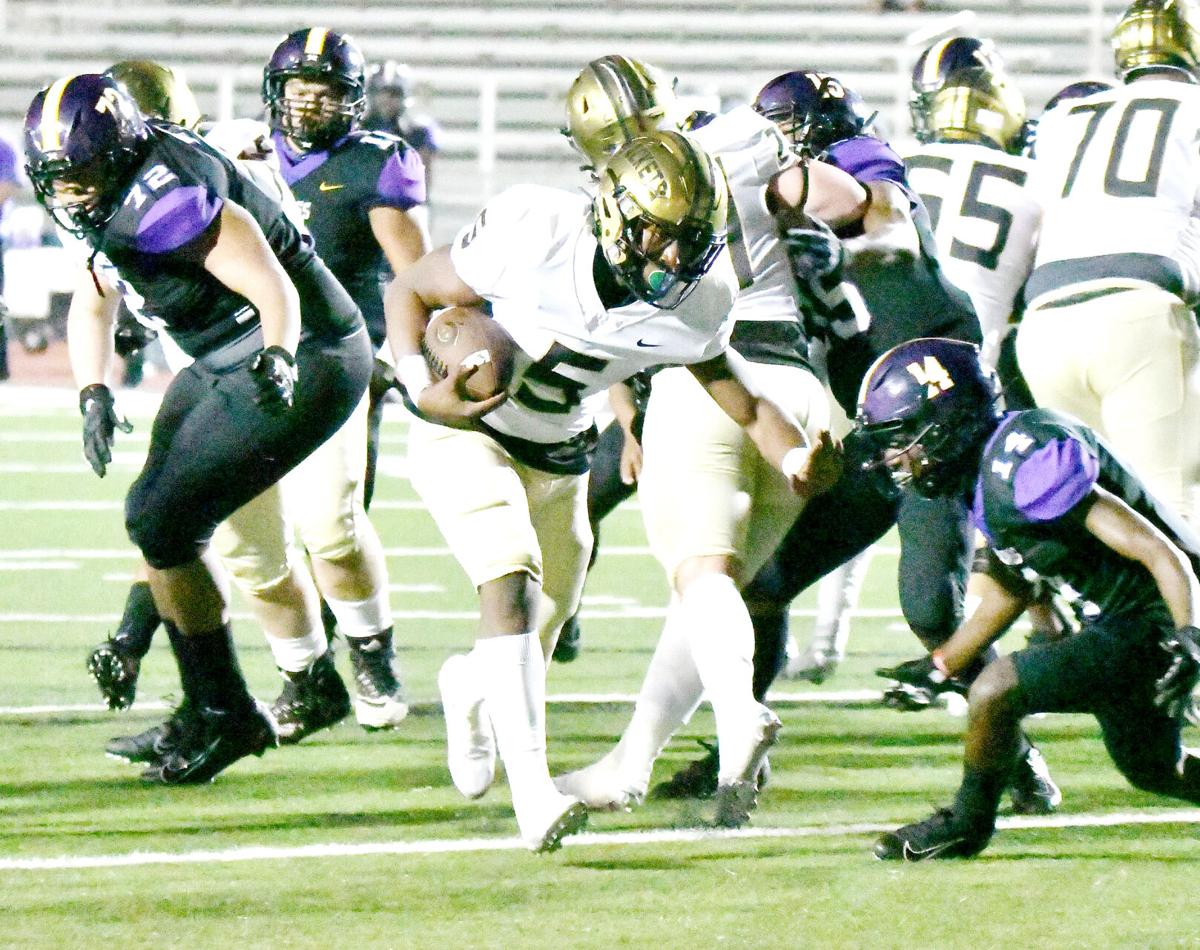 Cleo Chandler and the Cleburne Yellow Jackets will try to pull off a huge upset against No. 2 Aledo on Friday. Aledo has won 94 consecutive games in district play. 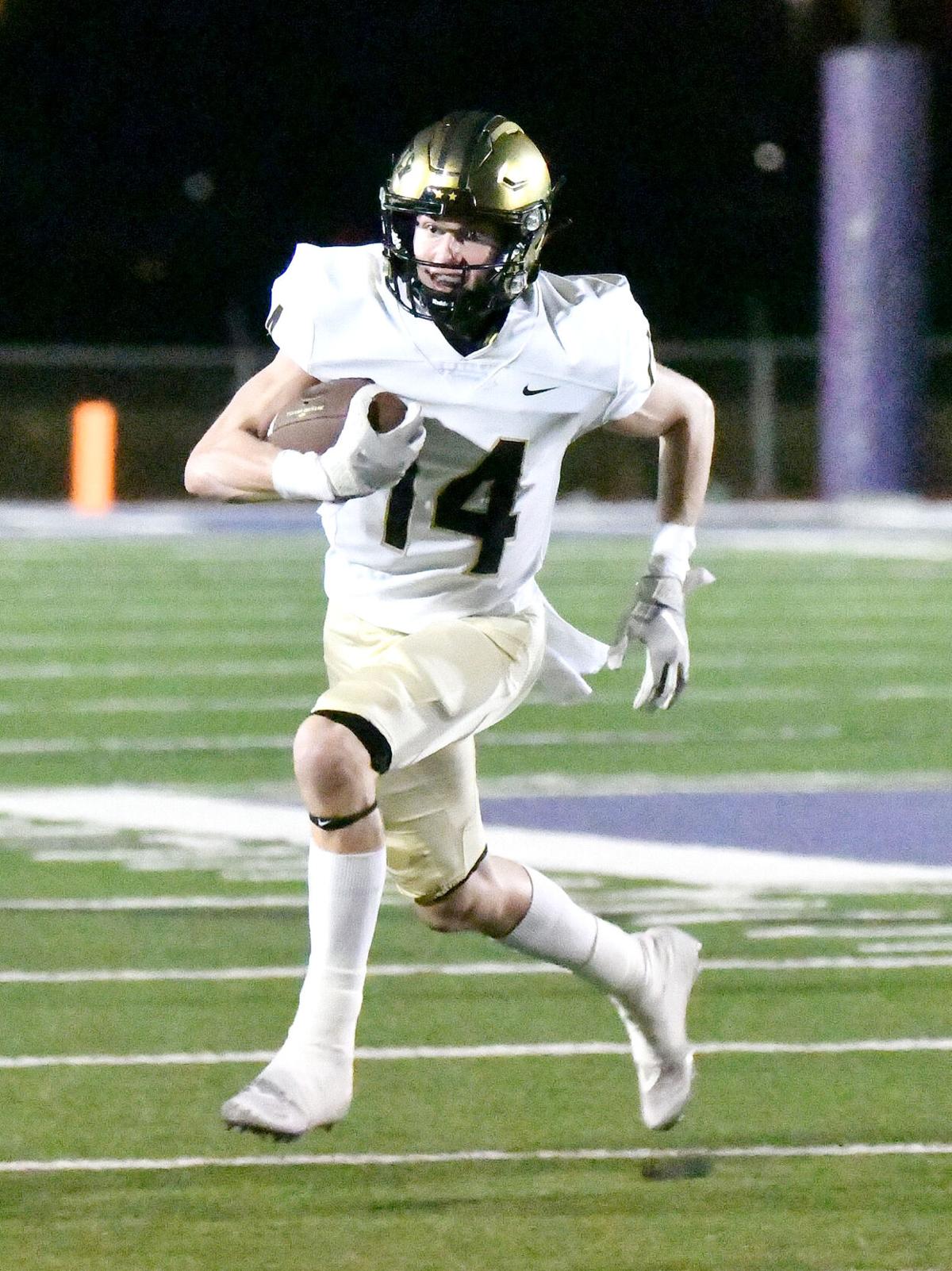 After two weeks of no games because of COVID-19, Gavin Naquin and the Cleburne Yellow Jackets are scheduled to host No. 2 Aledo on Friday.

Cleo Chandler and the Cleburne Yellow Jackets will try to pull off a huge upset against No. 2 Aledo on Friday. Aledo has won 94 consecutive games in district play.

After two weeks of no games because of COVID-19, Gavin Naquin and the Cleburne Yellow Jackets are scheduled to host No. 2 Aledo on Friday.

After two-plus weeks of uncertainty, anxiousness and waiting, the Cleburne Yellow Jackets are scheduled to return to action Friday when they host the No. 2-ranked Aledo Bearcats.

Cleburne’s game on Nov. 13 at Arlington Seguin was postponed to Nov. 19 because of COVID-19 concerns, and then the rescheduled game was canceled entirely because of the virus.

Cleburne Coach Casey Walraven said the last two-plus weeks were challenging and frustrating for a number of reasons.

“I think the biggest thing is it’s been a lot of uncertainty,” Walraven said. “It’s tough mentally. It’s kind of exhausting mentally for kids and coaches. The coaches work long hours on the weekends to prepare for the upcoming game, and when you have games that don’t happen, then you push the reset button. But the same thing happened the next week. All of that work wasn’t utilized because we didn’t get to play the game.

“So now you try to hit the reset button again and get ready for Aledo. It’s hard for these kids because you’ve got to explain to them that nothing’s a guarantee but at the same time you’ve got to prepare mentally and physically that you’re going to play. I will say we’ve had two great days of practice this week. We’ve really enjoyed being out there and that was the main goal. We want to get work in but we also want to enjoy it and I thought we’ve done a good job of that this week.”

Aledo (5-1) experienced the same uncertainty earlier this season as the Bearcats had a couple games canceled because of COVID-19. Prior to Aledo’s win over Mansfield Timberview last week, the Bearcats last played a game on Oct. 30.

Walraven said the challenging part Friday after a two-week layoff will be readjusting to game speed, but he also said the players are chomping at the bit to play a game after two-plus weeks of practice with no game action.

“When you don’t play for two weeks, the hardest part is getting back into a rhythm and adjusting to the speed of the game,” Walraven said. “At the end of the day, we knew this year had this kind of challenge and we’re going to have to step up and meet it. Several teams across the state have faced this thing. We’ve got to be able to mentally handle it and I think we will. When you practice for three weeks without a game, you’re more than ready to play. We’re ready to compete. We need to get after it against the best team in Texas.”

With last week’s 44-28 victory over Timberview, the Bearcats clinched the District 5-5A Division II title and pushed their winning streak in district play to 94 games. Entering the season, there was some talk among Texas high school football fans that Aledo might take a step back this season. But that hasn’t been the case.

“I don’t think a down year exists there,” Walraven said of Aledo. “I know with their standards, they see different things. But I honestly think they’re better in certain areas than I’ve ever seen them. Their tradition and hype is real. They just keep reloading every year. I do look forward to our guys being able to take on the challenge. We’re going in to give it all we’ve got and be confident in the fact we can do some things. We know we have to play error-free ball to be able to have a shot at it. We all understand that. The more we can play teams like Aledo and learn how to compete and see what that level looks like, the better. You can’t simulate it, you have to get out there and do it. That’s what we’re looking for Friday.”

One of Cleburne’s biggest issues this season, however, has been consistently putting together long stretches of play without costly errors or mistakes.

“We’ve had a game or two where we felt like we played pretty well and pretty fluid throughout,” Walraven said. “But when we set the standards and expectations earlier this year, everything got elevated. At times, we’ve mentally had trouble in pressure situations being able to accomplish those things. It’s definitely something we’re looking to do. These great opponents we’ve faced, they’re going to bring out mistakes. We make these mistakes during pressure situations. ... And the only way to get better at them is to continue to go through them and we know Aledo is going to put us in several tense situations.”

Offensively, Aledo is led by LSU commit JoJo Earle, who is a threat to take it the distance from anywhere on the field and from a number of different positions.

“He’s one of the best players I’ve ever seen in high school, honestly,” Walraven said. “When you’re watching his film, it looks like you’re watching it in fast forward. He’s got a special gift. He’s got talent but it’s also how hard he plays. He’s a really good football player with a lot of talent and he looks like a good leader for them.

“They do a good job of getting him the ball in different ways. He’s so dynamic wherever he’s at. He’s definitely the focal point of their offense.”

Walraven said there’s no way of shutting down a talented player like Earle; instead, they’re focused on limiting his big-play ability while also containing the Bearcats’ other weapons.

“We’re not going to be able to completely stop him, honestly,” Walraven said. “He’s going to be able to get his yards. He’s showed that every week. I don’t think we’re naive enough to think we’re going to completely shut him down. But we’re going to have to contain him the best we can, rally to the ball and then tackle well. We need to limit the big play and keep him contained. We feel like we can be successful against him, but he’s shown week in and week out that he’s going to get it don in some form or fashion. We can’t let other people beat us as well. We have to make sure we contain the rest of them and not let someone else beat us while we’re so concerned with him.”

While an LSU commit leads the Bearcats on offense, another LSU commit — junior safety Bryan Allen — leads Aledo on the defensive side as well. But Walraven said Aledo’s defense is solid everywhere.

“I think this might be the best defensive backfield they’ve had, at least since I’ve seen them,” Walraven said. “They’ve got a tremendously talented defensive back group. They add that to an aggressive, hard-playing interior. Their safety, No. 7, is an LSU commit. He’s a good, fast kid. He can really play ball and he’s athletic.

“Defensively, they’re solid everywhere, just like they are every year. They’re extremely physical and aggressive at linebacker. They get lined up really well. They don’t do a whole lot of different things defensively because they don’t have to. You can tell they’re a championship team and they do everything well. We have to make sure we avoid the turnovers and costly penalties that’s kind of plagued us to be able to have a shot to move the ball at all.”

Kickoff is scheduled for 1 p.m. Friday from Yellow Jacket Stadium.

When Cleburne’s game against Arlington Seguin was canceled, the district voted to revert back to the results of zone play from earlier this season to determine playoff berths. So Aledo, Mansfield Timberview, Everman and Arlington Seguin are already penciled in as playoff qualifiers. The Jackets, as the No. 6 seed (behind No. 5 Burleson), would only see postseason play if two of the top 5 teams are unable to play their bi-district games because of a COVID-19 outbreak.

Even though a playoff appearance is unlikely for the Jackets, Cleburne (4-3) still has hopes of finishing with a winning record for the first time since 2016. After Friday’s scheduled game against Aledo, the Jackets are scheduled to finish out the season Dec. 3 at Waco University.