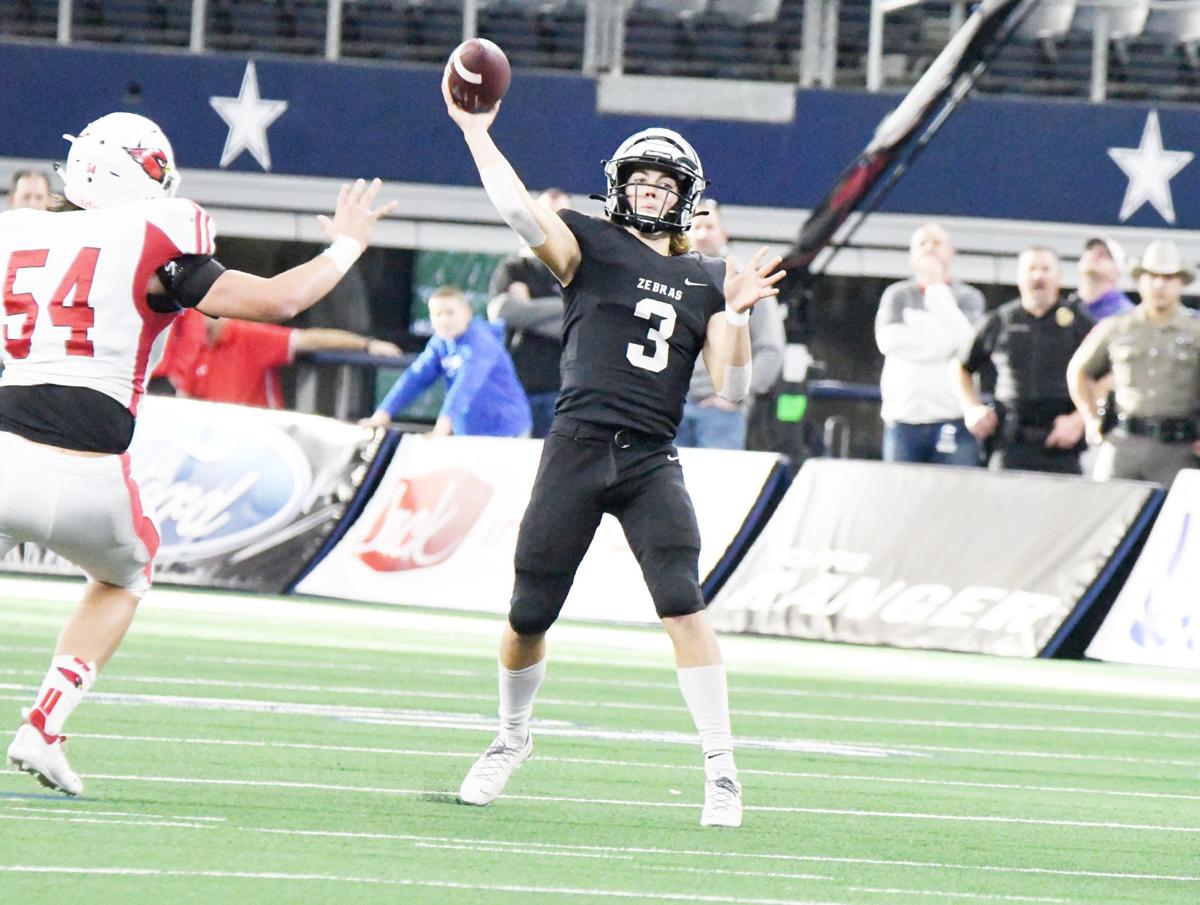 Grandview junior Dane Jentsch accounted for 370 total yards as he completed 12-of-17 passes for 218 yards to go along with a game-high 152 rushing yards and a touchdown on 14 carries. On defense, Jentsch had five tackles, including a key goal-line stop on fourth down, and an interception. 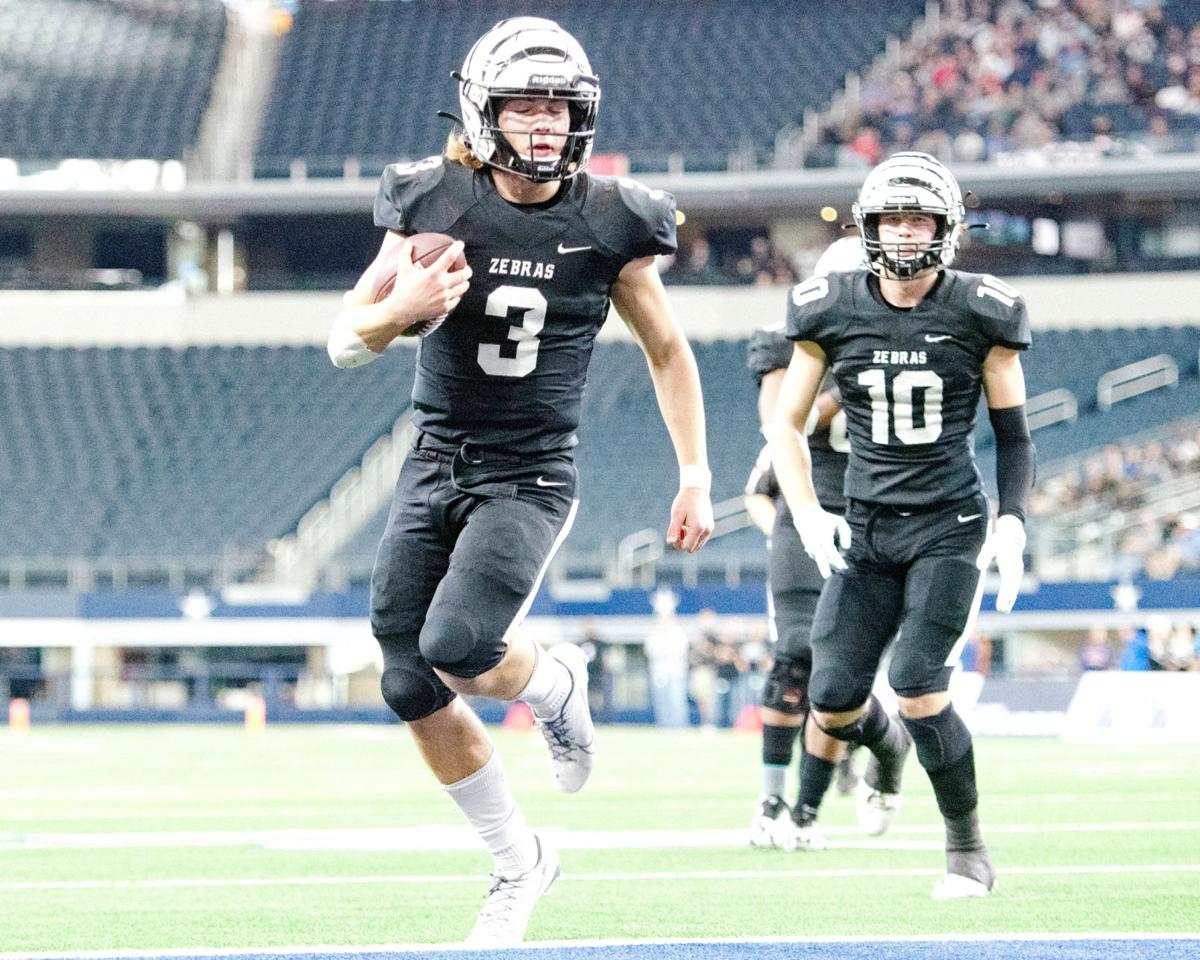 For a second consecutive year, Grandview's Dane Jentsch was voted the offensive and defensive player of the game after helping lead the Zebras to back-to-back state titles. After the game, however, Jentsch gave senior running back Tremayne Gullatte the offensive MVP plaque.

Consider this: Jentsch is 15-1 as Grandview’s starting quarterback in the playoffs since 2017 ... and he’s only a junior. Sixteen games is the length of an NFL regular season, and only six teams in NFL history have gone 15-1 in the regular season.

As a freshman, Jentsch helped the Zebras reach the regional final before falling to Kemp, 13-10. Since then, Jentsch and the Zebras have won 12 straight playoff games en route to back-to-back titles the past two seasons.

In Thursday’s win over Pottsboro, Jentsch accounted for 370 total yards as he completed 12-of-17 passes for 218 yards to go along with a game-high 152 rushing yards and a touchdown on 14 carries.

On defense, Jentsch had five tackles, including arguably the biggest play of the game when he shot through the line of scrimmage to bring down Pottsboro’s quarterback for a loss of two yards on fourth-and-goal from inside the 1-yard line to preserve a seven-point lead. Jentsch also had an interception in the third quarter — his fourth straight game in the playoffs with an interception.

“I’ll never be able to put into words the things he’s able to do on a football field,” Grandview head coach Ryan Ebner said. “I know that his parents are extremely proud of the things he’s accomplished with the hard work he’s put in. They’re a tight-knit family. He’s getting what he deserves from the work he puts in.

“The confidence he has in his teammates and the confidence they have in him is phenomenal. You get to a point where you think it’s the best you’re going to see from him, then he surprises you with something else. Playmakers make plays, and that’s what he does.”

In last year’s 35-21 state-championship victory over Malakoff, Jentsch was 15-of-26 passing for 171 yards and three touchdowns to go along with 89 rushing yards and a touchdown on 22 carries for 260 combined yards and four total touchdowns. Defensively, Jentsch had a team-high nine tackles, including a touchdown-saving stop on a 66-yard Malakoff pass early in the third quarter with the Zebras protecting a 21-14 lead. Jentsch’s chase-down tackle along the sideline proved to be a huge play as the Tigers turned the ball over on downs a few plays later.

Including Grandview’s six playoff games, Jentsch threw for 3,349 yards, 34 touchdowns and five interceptions with 1,029 rushing yards and 15 touchdowns this season.

But perhaps just as impressive as the accolades and stats — as my colleague Lee Tyer wrote — was Jentsch’s selfless act of handing the offensive MVP plaque over to senior running back Tremayne Gullatte after the game.

“That shows me the character of the kids on our team,” Grandview High School Principal Kirbay Basham said. “This team loves each other. They put the team first: ‘You need me to play guard? I’ll play guard. You give me the award? I’m going to give it to my teammate.’ They love each other. They play for the name on the front of their jersey. They’re Zebras first and foremost. That’s all they care about is playing for the Zebras.”

Grandview graduates a strong and deep senior class, so there’s no guarantee the Zebras make another deep playoff run. But no matter what happens in 2020, Jentsch and these Zebras will go down as legends in Texas high school football history — and especially in Johnson County.