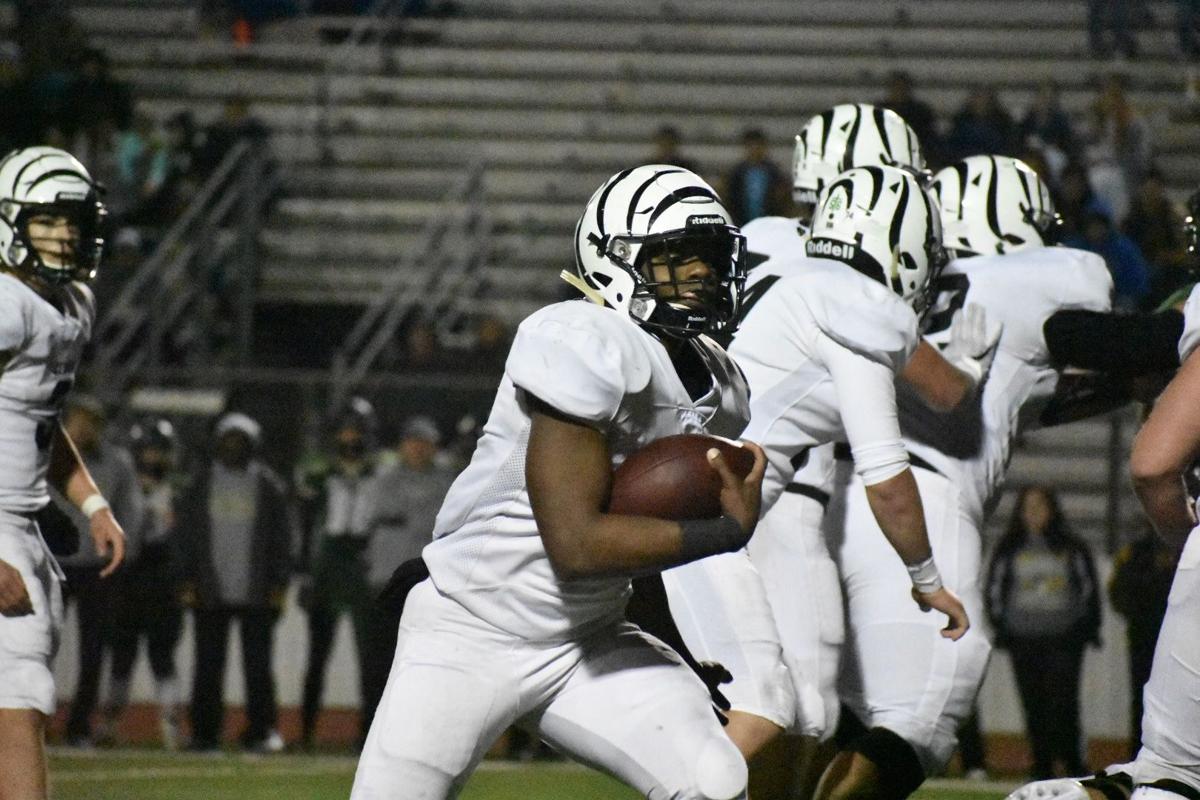 Grandview senior running back Tremayne Gullatte rushed for 234 yards and two touchdowns to help the Zebras knock off East Chambers, 43-29, on Friday. 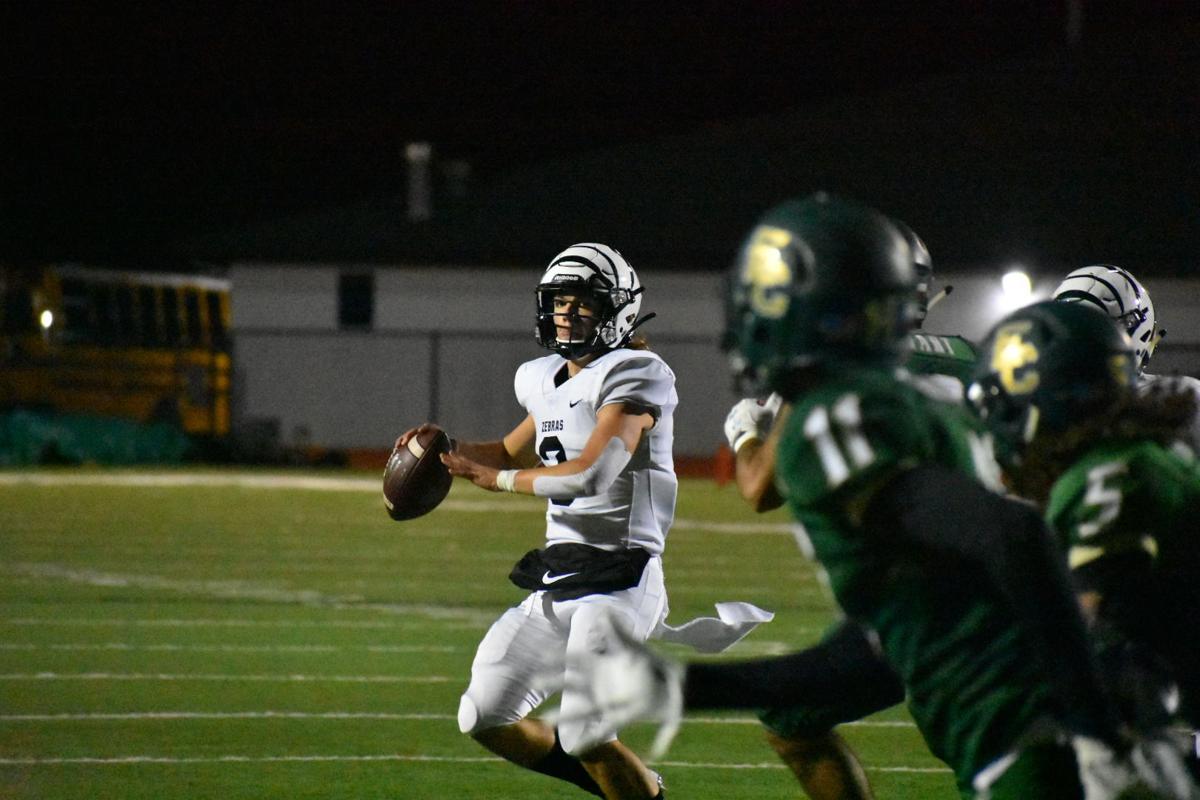 Grandview senior running back Tremayne Gullatte rushed for 234 yards and two touchdowns to help the Zebras knock off East Chambers, 43-29, on Friday.

BRENHAM — In one of the tougher and more intriguing second-round matchups across the state, the Grandview Zebras pulled away in the second half for a 43-29 win over East Chambers in the Class 3A Division I Region III area playoffs Friday at Cub Stadium.

The No. 2-ranked Zebras (11-1) ended the Buccaneers’ (10-2) season for the third time in five seasons and second consecutive postseason, as Grandview moves on to the regional playoffs where it will face No. 7 Cameron Yoe.

Grandview senior running back Tremayne Gullatte had his best performance this season, if not his career, with 234 rushing yards and two touchdowns on 27 carries as the East Chambers defense had trouble slowing him down.

“He had a great game,” Grandview coach Ryan Ebner said. “Not only did Tremayne run the ball really hard and made a lot of good cuts and saw the open holes, but there were open holes because the line did an unbelievable job. As an offensive staff, coach John Jay, coach Paige Burelsmith and coach Brandon Lillard did a great job of preparing an offensive game plan and having the line ready. And Tremayne did the rest after that. He hit the holes hard and he did a great job of running the ball really hard and getting extra yards after contact.”

East Chambers started strong early as Ernest Ceaser put the Bucs on the board, then he added the two-point conversion for an 8-0 lead.

The Zebras tied it on a two-yard Jentsch run, then Luke Ferguson completed the two-point conversion pass to Jentsch to knot things up at 8-8 at the end of the opening quarter.

The Buccaneers went back out in front as freshman quarterback Jacoby Perrault scored on a six-yard run for a 15-8 advantage.

Grandview battled back to tie it on a 15-yard run by Jentsch to make it 15-all with 4:18 left until halftime.

Then the Zebras took their first lead of the night when Jentsch connected with senior receiver Austin Boyd on a 44-yard touchdown pass to give Grandview a 22-15 lead with 1:45 left in the second quarter. Grandview’s defense would make that lead stand at halftime.

The Zebras then made their move early in the third as Dametrious Crownover snagged a touchdown reception over a defender on a 13-yard pass from Jentsch, and Nathaniel Baker’s extra point gave Grandview a 29-15 lead with 8:43 left in the third.

With East Chambers backed up inside its own 20 and facing a third-and-long, the Bucs got a huge play to stay in the game as Perrault hit Alejandro Lopez for an 82-yard touchdown pass to make it a one-score game again at 29-22 with 7:40 left in the third.

But Grandview would answer less than 2 minutes later as Gullatte did much of the heavy lifting, capped off by a five-yard run from the bruising tailback to give the Zebras a two-score cushion again.

With the Buccaneers driving inside the 10 and trying to make it a one-score game again, Jentsch came through with an interception on fourth down to all but end hope for East Chambers.

“It was a big moment,” Ebner said. “They were moving the ball on us at different times throughout the night. On that play, the linebackers did a good job of extending the play out and Dane read the rest. It was a big moment as far as you knew they would be down one score if they got in there. So it was a pretty big moment.”

With 4:32 left, Gullatte found the end zone again from five yards out to give the Zebras a commanding 43-22 lead.

East Chambers tacked on a four-yard run from Nolton Shelvin to produce the final margin.

Shelvin led East Chambers with 74 rushing yards on 15 carries while Perrault completed 6-of-12 passes for 131 yards, one touchdown and one interception with 50 rushing yards and a touchdown on 17 carries.

Ebner raved about the job the Grandview offensive line has done this season after overcoming the loss of two returning starters while dealing with other injuries and changes up front.

“They’re playing extremely well right now,” Ebner said. “They’ve worked extremely hard all season. Both coaches and players have been working extra and watching extra film and doing extra things to make sure they’re all working together. You’re starting to see the communication come together and them really gelling. I’m really proud of them for not making excuses and not being worried about what we could’ve had. It’s just basically been next man up and lets get the job done.”

It’s the third year in a row the Zebras have advanced to the regional playoffs as Grandview football is in its most successful run in program history.

“There’s been a lot of coaches and players that have come before that put in a lot of hard work,” Ebner said. “I think this group has seen that example. We all keep working hard and plugging away and we’re extremely blessed to have the players we have. It’s one of those things that they have an opportunity with their ability and what kind of kids they are and how smart they are, and they’re taking advantage of that opportunity; they’re not letting it slip by. They really enjoy playing with each other, and I think you can see that during these runs.”

Grandview and Cameron Yoe (11-1) will meet in the Class 3A Division I Region III third-round playoffs at 1 p.m. On Nov. 29 at Waco ISD Stadium as the Zebras try to make their way through a rugged Region III for a second straight season.

“It’s a battle week in and week out [in Region III],” Ebner said. “There’s never an off game in this region. Everybody can really play football and everybody has athletes in this area. It’s a week-in and week-out battle. It’s one of those things that gets you more prepared each week but at the same time you get beat up a little bit. At the end of the day, it’s stacked.”