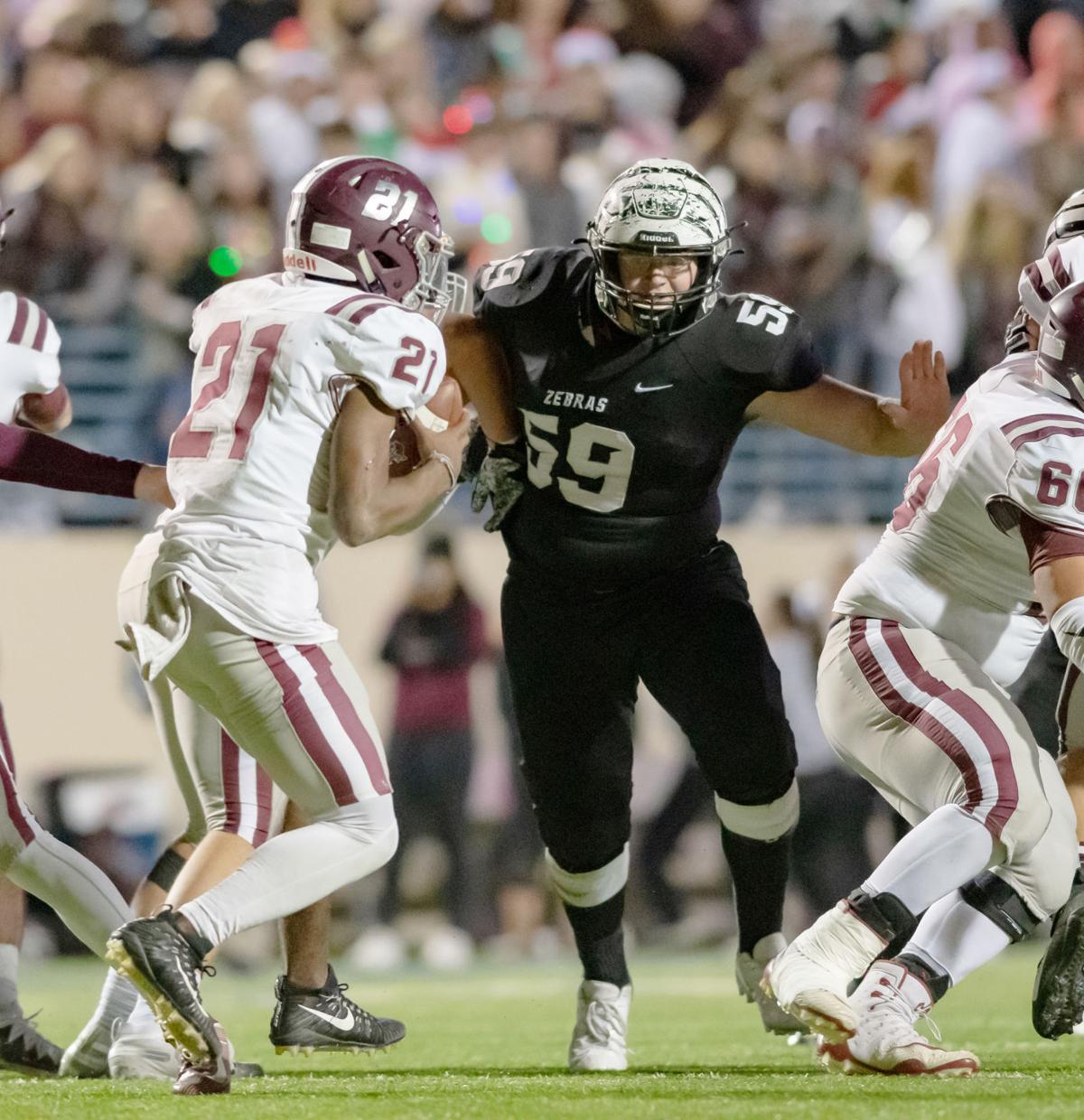 Grandview defensive lineman Cade Fedor (59) and the Zebras face another strong rushing attack in the form of running back Tyree Simcik and the Columbus Cardinals in the Class 3A Division I state semifinals at 7:30 p.m. Friday in Austin. 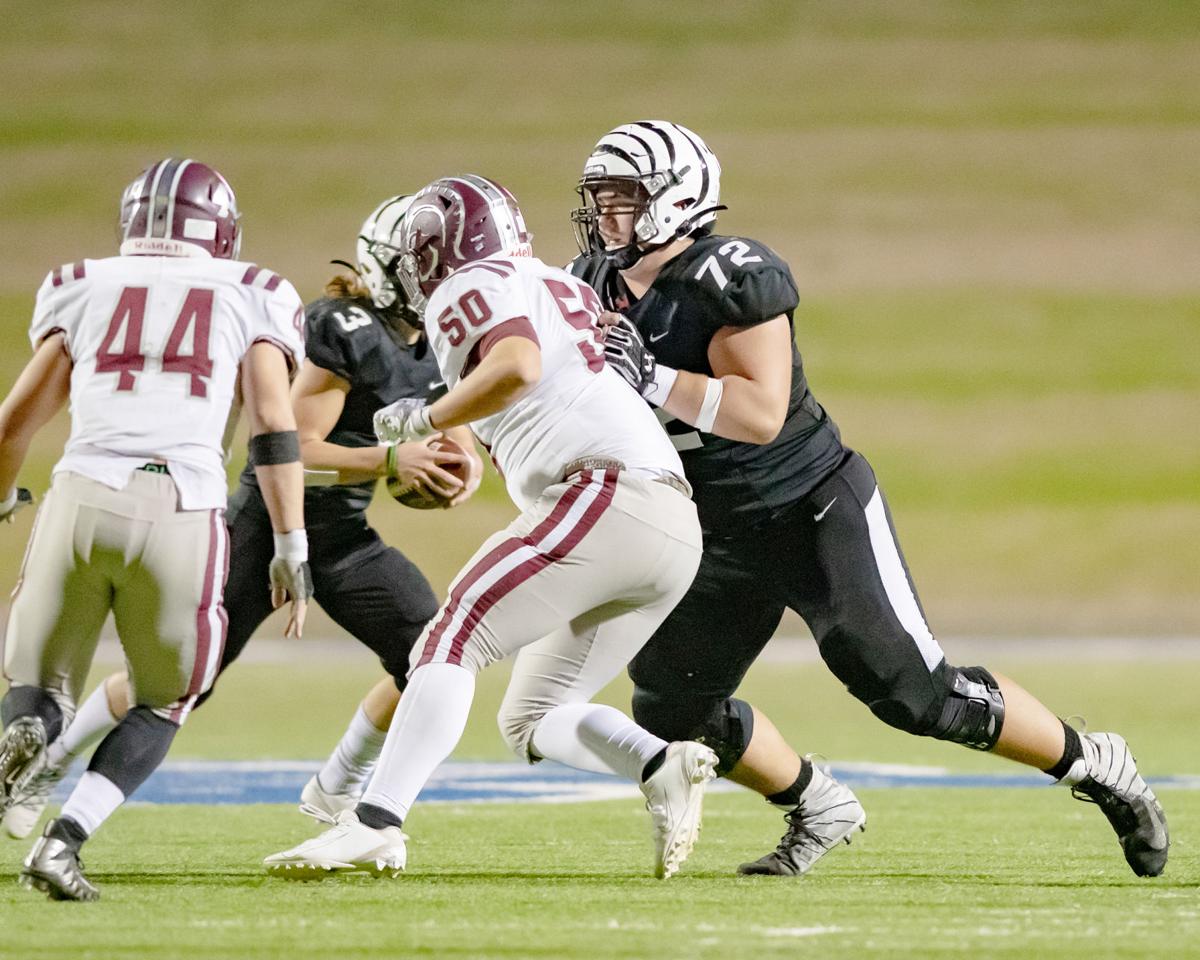 Grandview junior offensive lineman Jacob Bayer (72) and the Zebras will meet the Columbus Cardinals at 7:30 p.m. Friday from the Kelly Reeves Athletic Complex in north Austin in the Class 3A Division I state semifinals.

GRANDVIEW — The Zebras are a win away from a return trip to AT&T Stadium and the chance to defend their 2018 state title, but Grandview faces one final road block in the form of the Columbus Cardinals.

No. 2 Grandview (13-1) and Columbus (12-2) are scheduled for a 7:30 p.m. kickoff Friday from the Kelly Reeves Athletic Complex in Austin in the Class 3A Division I state semifinals.

The Zebras are coming off another impressive playoff performance with a 34-13 win over No. 6 Troy in the Class 3A Division I Region III final, while Columbus beat Hallettsville, 48-25, to come out of Region IV.

“They have good size, good speed, and they’re very well-coached,” Ebner said. “They keep things simple and they execute very, very well. You can tell they’re a senior-heavy group that’s been together for a long time and that they’re just very well-coached.”

While some chatter on social media and among fans is that Region IV is the weakest in Class 3A Division I, Ebner said he certainly considers Columbus a more-than formidable opponent.

“That’s an opinion from people that just look at schedules and results and make predictions, as opposed to when you break down the film and you see the quality of opponent you’re playing,” Ebner said. “I don’t care what region they came out of; I just know they’re very good athletically, I know they’re big, strong kids, and I know they’re coached very-well. We have nothing but the utmost respect for them and expect a tough game.”

Columbus is only two years removed from back-to-back 3-7 seasons. The Cardinals made the playoffs last year before losing in bi-district. But now Columbus, led by coach Matt Schobel — who played tight end in the NFL from 2002-08 — is a win away from playing for a state championship.

While Grandview clearly has the experience factor over Columbus, Schobel points out that the Zebras were able to hoist the state hardware last year despite playing this deep in the playoffs for the first time.

“Experience is always a benefit,” Schobel said. “It absolutely plays a part, but at the same time they were the new guys last year and won the state championship. Ninety-five percent of that team is back so no question we will have to be on our game to have a shot at winning this football game.”

“[Grandview is an] unbelievable team. They are well-coached, athletic and play hard. We will have to earn everything we get. We have a ton of respect for that program.

“They’re about running the football, first and foremost,” Ebner said of the Cardinals. “And then pass-wise, it’s play-action off of that. They’ve got two good receivers on the outside with pretty good speed. If we’re not doing our job in those individual battles, they can beat you deep so we’ll have to be very sound there. They’ve got guys in the box who have good size and who block hard. At the end of the day, they rely on the run game to get them to where they need to go.”

Columbus is led by senior running back Tyree Simcik, who ran for 287 yards and five touchdowns on 32 carries in last week’s win.

“They’ve got a running back who doesn’t go down easy,” Ebner said. “He’s very big at about 6-foot and 225 pounds. He really runs behind his pads well. He does a good job of running with some attitude. When he gets a crease, he’ll get behind his pads and put his head down and push the pile. We’re going to have to have guys flying to the football and winning their individual battles just to get to him.”

Schobel said the Cardinals will be tested against a disciplined and physical Zebra defense.

“Grandview has a great defense,” Schobel said. “They’re big up front, and, again, well-coached. They’re always in position and play with discipline and are great players. We will have to earn every yard.”

While Columbus is a run-heavy team like Troy was, the Cardinals and Trojans go about it a bit differently, and their star running backs are built differently.

“We don’t want this big kid getting a full head of steam,” Ebner said. “With Troy, they were more run-heavy but they were going to mix it up with some misdirection out of their fullback and then No. 21 would run it up inside the tackles and run it outside, too. But [Columbus] is more run downhill at you and stop it if you can.

“Last week, it was about using numerous guys to contain [Troy’s Zach Hrbacek]. This week, it’s about getting bodies to the guy. He’s not slow by any means, but it’s more about getting a couple of bodies to him and make sure we team tackle and get him to the ground. We can’t arm tackle him or reach out and grab him, we’ll have to put our body on him.”

Grandview’s offense — led by junior quarterback Dane Jentsch and a plethora of receiving threats, including Austin Boyd — will be challenged against a Columbus defense that mixes up its looks. The Cardinals have allowed 17.7 points per game this season while the Zebras have scored 41 points per game on offense through 14 games.

“They run an even front,” Ebner said. “You’ll see 4-2-5 but they’ll get in different fronts and they do a good job of switching things up. They’ll even get in a bear front and show some real aggressive looks. They also do a good job of moving guys around in the secondary and trying to disguise coverages, so Dane won’t be able to rely on the same look every play. And their defensive coordinator was at Franklin last year so he has some prior knowledge.”

Schobel said the Zebras’ offense poses a number of challenges to opposing defenses, with Jentsch leading the way.

“Grandview offensively will be the best offense we have seen all season,” Schobel said. “It all starts with No. 3 [Jentsch]. They have great players around him and they do a great job scheme-wise. Tremendous challenge for our team.”

While Grandview’s offense has the ability to pick apart teams in different ways, Ebner said the Cardinals are talented on defense at all three levels, and that presents obvious problems.

“They’ve got two-way starters at their tackles and ends who are real good,” Ebner said. “They’ve got a really good linebacker crew and an athletic secondary. At this point, you’re going to have good players at every level. But the athleticism of their secondary and the hard-nosed play of their linebackers stands out. We’re going to have to break some tackles and receivers will have to do a good job of running routes and finding open spaces, and when they’re in man beating them one-on-one.”

As stacked as Grandview is at the skill positions, once again it will come down to the trench battle, where the Zebra offensive line will be faced with unique challenges this week.

“Up front, they do a good job of mixing things up and getting after it,” Ebner said. “It’s tough to single block them for a while. We’ll have to do a good job of talking with who’s got what, winning our one-on-one battles, communicating and knowing when we’re going to combo block, and then when to pass guys off, and see those things all work together. They’re not just going to straight-up pass rush, they’re going to loop and stunt to try to confuse us.”

After Grandview’s win over Troy, the Zebras had almost a business-like approach with minimal celebration. Ebner said this group almost always has the right mindset about the task at hand.

“I think due to their success and their experience, they know what the goal is each and every week,” Ebner said. “They kind of lean on that themselves. As coaches we’re here to remind them from time to time about those things. We talked a lot at the beginning of the week after coming off a big win over Cameron Yoe that we have to prepare for the next game as the biggest game. And that’s the way we’ve prepared all year. When you have experienced kids and they’ve been being preached that their whole career, that’s just the mentality you see.”

Having reached the “final four” last year, Ebner said he believes his team is better-prepared for what’s at stake and the big stage.

“I feel like due to the experience last year, you know what this time of the year feels like playing football,” Ebner said. “Those things are nice to have due to the experience. The thing that stands out the most is this group already knows. As a coaching staff, you can get there again but if it’s a different group you have to teach them. But this group already knows what it’s like.”

“As always, you want to make sure you don’t give up anything big in special teams and make sure you’re winning the turnover battle,” Ebner said. “At the end of the day, it’s going to be who’s winning their one-on-one battles the most. Both teams are going to do a good job of exploiting the other’s weakness. At this stage, there’s no bad teams, so it will take a game that I feel will come down to four quarters.”

Both of Columbus’ losses this season came by a combined five points — a 24-21 loss at La Grange on Sept. 6 and a 28-26 loss to Hallettsville on Sept. 27. The Cardinals have won nine straight games since.

The other Class 3A Division I state semifinal matchup is Brock vs. Pottsboro. The winner of both state semifinal showdowns will meet at 3 p.m. on Dec. 19 at AT&T Stadium.