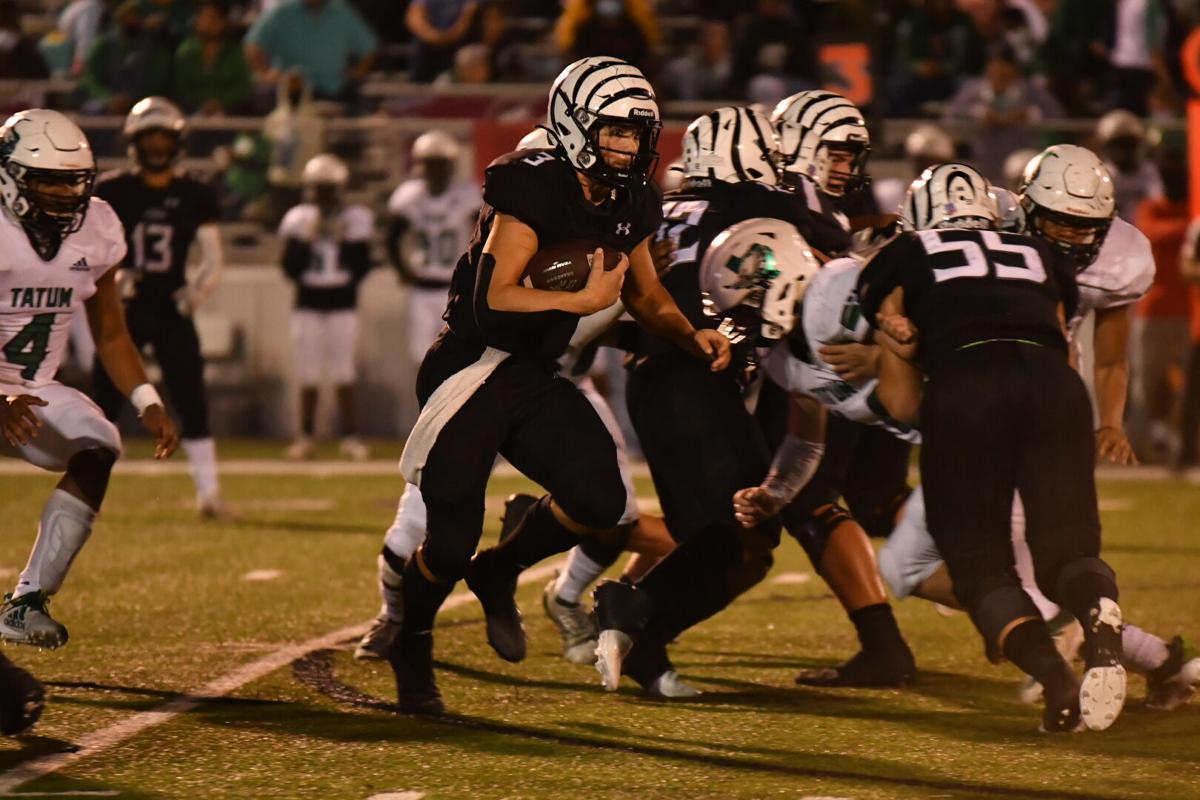 Grandview QB Dane Jentsch accounted for more than 400 total yards to help the Zebras get past Tatum, 49-23, in a Class 3A Division I area playoff game Friday night in Athens. Jentsch improved to 17-1 in the playoffs. The Zebras are in the third round of the postseason for the fourth consecutive year. 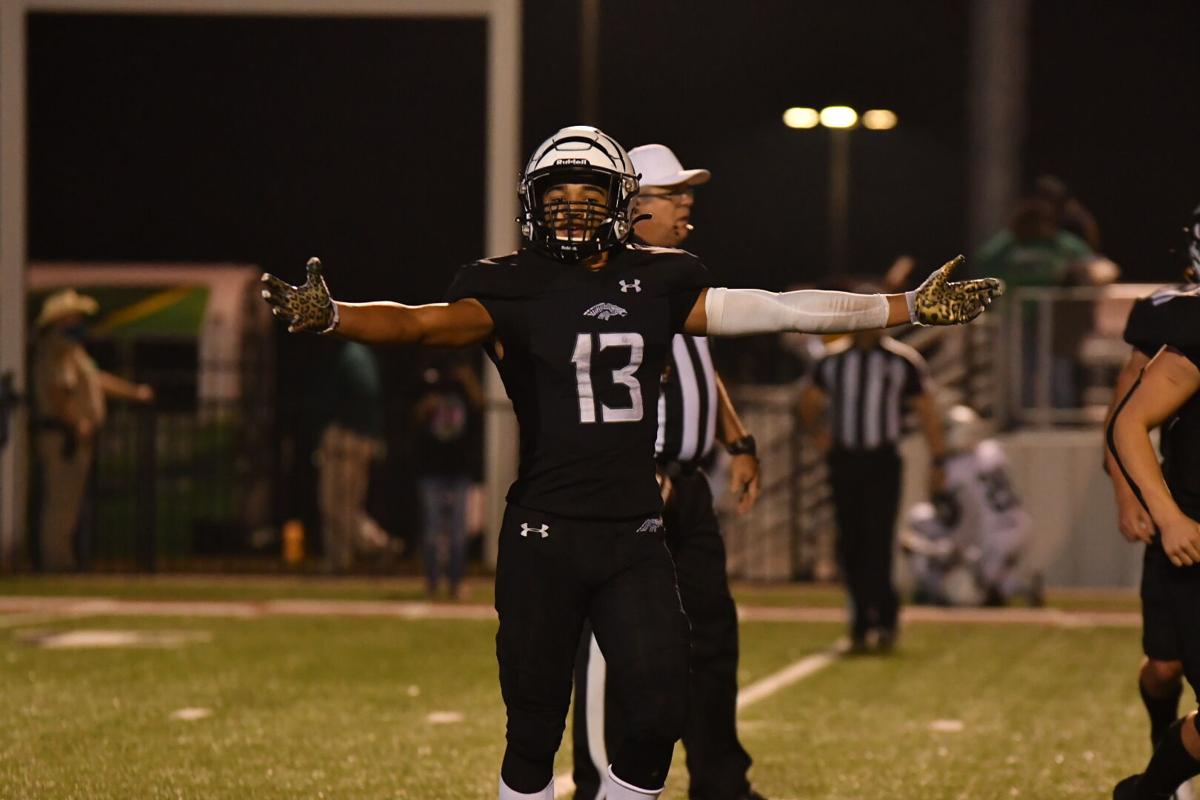 Grandview sophomore Kason English had his fingerprints all over the Zebras' area-round win over Tatum on Friday. English scored on a 70-yard reception, he had a 91-yard kick return to set up another touchdown, and he had two interceptions on defense. 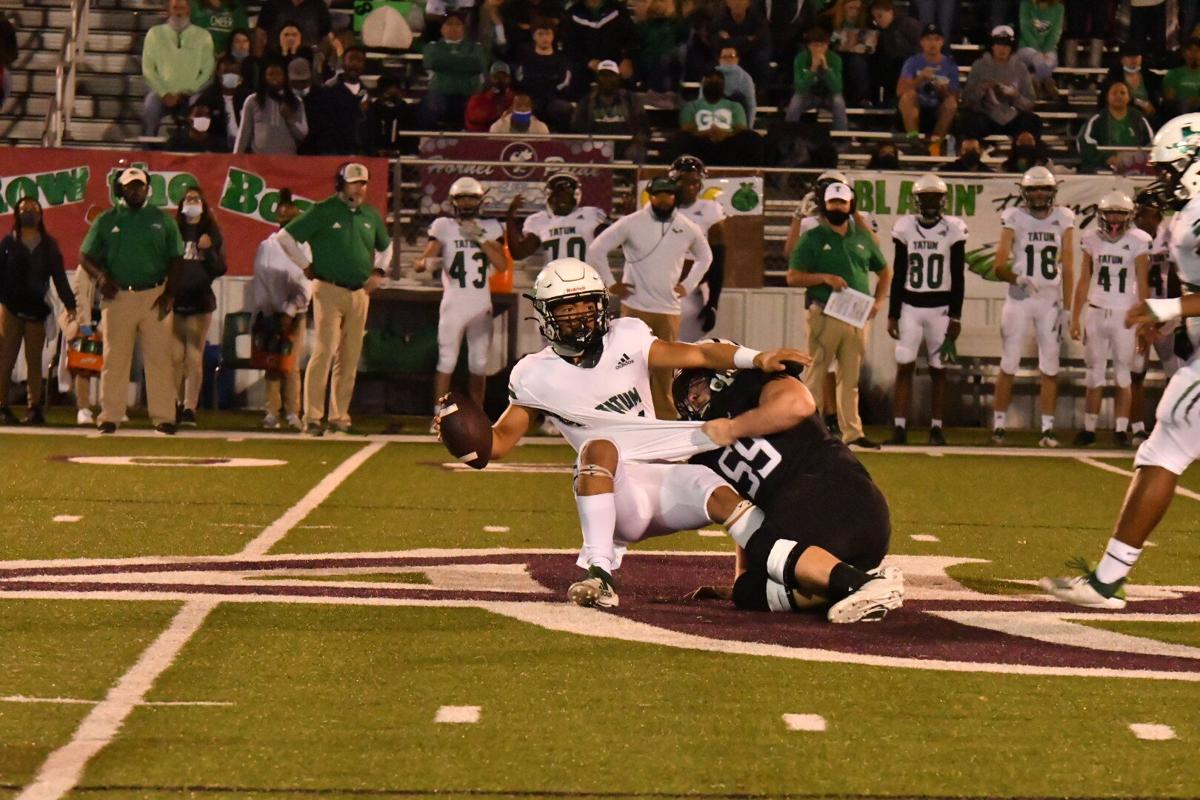 Grandview QB Dane Jentsch accounted for more than 400 total yards to help the Zebras get past Tatum, 49-23, in a Class 3A Division I area playoff game Friday night in Athens. Jentsch improved to 17-1 in the playoffs. The Zebras are in the third round of the postseason for the fourth consecutive year.

Grandview sophomore Kason English had his fingerprints all over the Zebras' area-round win over Tatum on Friday. English scored on a 70-yard reception, he had a 91-yard kick return to set up another touchdown, and he had two interceptions on defense.

ATHENS — The Grandview Zebras took another step forward in their quest for a three-peat with a 49-23 win Friday night over the Tatum Eagles in a Class 3A Division I area-round playoff game at Bruce Field in Athens.

It is the fourth consecutive season the Zebras have qualified for the third round of the playoffs, a significant accomplishment for a program in the middle of a dynastic stretch as they try for their third straight state championship.

Friday's win over Tatum was Grandview's 37th victory in its last 38 games overall and the Zebras' 14th straight playoff win.

“We've been fortunate with great kids and great coaches who have all been willing to work hard,” Grandview Coach Ryan Ebner said. “That's the longevity of it is a lot of hard work put in by a lot of great people.”

Grandview was in control for much of the night, but things got a little shaky in the third quarter as the Zebras had three turnovers in their first four offensive snaps. The Eagles converted on Grandview's first mistake as Tatum quarterback Kendric Malone found the end zone from three yards out to make it a 28-17 game less than 2 minutes into second-half action.

Grandview then fumbled on its next snap and the Eagles recovered. Tatum moved the ball inside the Zebra 10-yard line looking to make it a one-score game, but the Eagles opted to go for it on fourth-and-goal from the 7 instead of settling for a short field goal, which would've made it 28-20. And Grandview's defense came up with a huge stop to force a turnover on downs, keeping it 28-17.

“We didn't come out and have a great beginning of the third quarter but what I was most proud of was how we responded.”

Starting inside their own 5-yard line, the Zebras appeared to get out of the shadow of their own end zone with a big pass from four-year starter Dane Jentsch to Coen Sanders, but the Eagles forced and recovered a fumble near midfield.

But for a second straight possession, Grandview's defense came up with a timely stop as sophomore sensation Kason English had his first of two interceptions on the night to preserve the 28-17 lead.

From there, Grandview marched 90 yards in 12 plays, capped off by a three-yard touchdown run by Jentsch for a 35-17 lead, and the Zebras wouldn't look back.

Early in the fourth quarter, Grandview's defense forced another turnover on downs. A couple plays later, Grandview running back Gavin Leftwich got loose for a 53-yard touchdown run to put the game out of reach at 42-17.

The Zebras jumped out to a 14-0 lead in the first quarter thanks in large part to two takeaways by the Grandview defense.

After a Clayton Hale interception on the game's first possession, a three-yard Jentsch run gave Grandview a 7-0 lead. Following punts by both teams, Grandview's defense forced another takeaway and the Zebra offense quickly cashed in as English took a short Jentsch pass 70 yards for a touchdown and a 14-0 advantage.

Tatum cut the deficit in half early in the second quarter on a 61-yard touchdown strike from Malone to Kendall Williams.

But on the ensuing kickoff, English returned it 91 yards before being tackled inside the 3-yard line. One play later, Brycen Davis scored the first of his two rushing touchdowns on the night, this one from a yard out, to reclaim a two-score lead at 21-7.

“He had a special night,” Ebner said of English. “It seemed like every time we needed a stop or big play, he was always there making that happen. We had some momentum changes and mistakes, but I felt like as a whole we were 'next play up' and they continued to play the way we know we can. The leaders did a good job of keeping everybody level-headed. We were able to swing it back our way there with that return.”

Tatum answered on its next drive with a 36-yard field goal to make it 21-10 with 59 seconds left until halftime.

With less than a minute to go in the half, the Zebras didn't just try to run out the clock. Jentsch engineered a precision-like drive and connected with Leftwich for a 12-yard touchdown pass with 14 seconds left to give Grandview a 28-10 lead at the break.

Jentsch, who improved to 17-1 in the playoffs, completed 10-of-20 passes for 300 yards to go along with 113 rushing yards on 14 carries with four total touchdowns (two passing, two rushing). Leftwich rushed for 137 yards on 18 carries.

Grandview racked up 559 yards from scrimmage while Tatum had 372 total yards.

Up next for the Zebras is a third-round playoff showdown with a familiar foe in the form of Malakoff.

It will be the fifth meeting between Grandview and Malakoff since the start of the 2018 season. The Zebras are 4-0 against the Tigers in that span, including a 35-21 win in the 2018 Class 3A DI state championship game. Grandview also beat Malakoff, 31-24, in overtime in week 1 of the 2020 season.

“I just know they're an extremely good football team and an extremely well-coached football team,” Ebner said. “Whatever way it's gone the last how many games, it will be an important week of preparation for us. A lot of things are going to have to get fixed and we'll have to get things schemed. Regardless of what's happened before, I think both teams are going to put a great game together.”

Grandview and Malakoff are tentatively scheduled to play at either 1 or 2 p.m. Nov. 27 at Waco ISD Stadium.