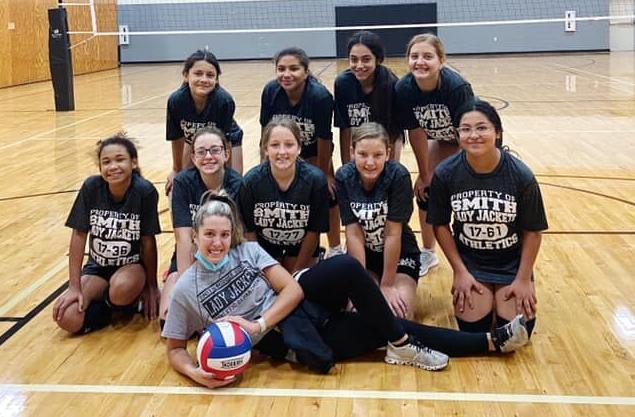 After a stellar four-year playing career as a Lady Jacket, Hannah King is back at Cleburne High School as the freshman volleyball coach. King taught and coached at Smith Middle School last year. 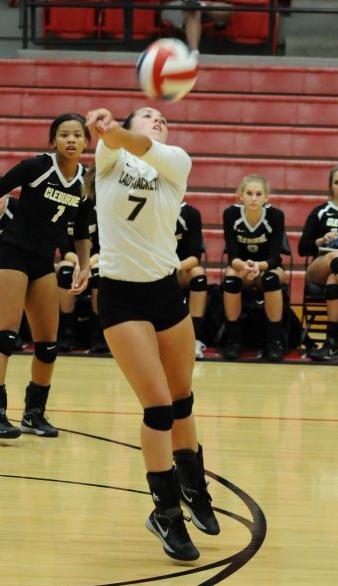 Hannah King was a three-time All-Johnson County superlative performer for Cleburne volleyball from 2013-15 and now she’s back at CHS as the freshman volleyball coach.

After a stellar four-year playing career as a Lady Jacket, Hannah King is back at Cleburne High School as the freshman volleyball coach. King taught and coached at Smith Middle School last year.

Hannah King was a three-time All-Johnson County superlative performer for Cleburne volleyball from 2013-15 and now she’s back at CHS as the freshman volleyball coach.

Hannah King had a stellar four-year varsity career as a key contributor to the success of Cleburne Lady Jacket volleyball from 2012-15 and now she’s back at Cleburne High School in a new role as head freshman volleyball coach.

King, a 2016 CHS graduate, just finished her first year teaching and coaching at Smith Middle School in the 2020-21 school year, and the opportunity presented itself to make the jump to the high school where she will coach the sport she loved — and excelled at — in addition to coaching track and field as well.

It wasn’t until a couple years ago, however, that King realized how much she missed volleyball and that she wanted to be involved in the sport.

“I was entering my junior year of college at Texas Tech University while pursuing a degree in Human Development and Family Studies, and I was trying to pinpoint what my future after college would look like,” King said. “I decided that I couldn’t get past my passion and love for volleyball — and sports in general — but also working with students in the classroom as well. I decided then that I wanted to graduate and become a teacher/coach to help spread my knowledge of sports and studies that I learned myself throughout the years.”

So after graduation, King began her teaching and coaching career at the same school she once roamed the halls as a middle school student.

“Last year, my first year teaching and coaching, was an absolute full circle moment for me,” King said. “It was incredibly heart-warming to return back to the middle school that I once represented myself and to see my name on the walls of the gymnasium. I have always had the black and gold passion in my veins and returning back to CISD ignited it times a thousand. I had a great time teaching and coaching the fundamentals of sports to young ages and inspiring them to become young adult athletes.

“... It was extremely rewarding getting to light the fire I had for Cleburne and sports into new, young faces and watching them grow in their knowledge and skills throughout the year.”

Cleburne ISD Athletic Director Jeri Hall said King had a “phenomenal” first year as a teacher and coach at Smith Middle School, especially considering it came during a challenging year with COVID-19 protocols and such.

“Halfway through last year she approached me about her long-term goals, which was to be at the high school coaching,” Hall said. “We talked about how that would work out certification-wise and if spots came open, then we could have that conversation. We wanted to see how she did at the middle level. And she had a phenomenal year at middle school coaching and her first year teaching, even with COVID and all the things that came with that.”

Hall said she expects King’s passion and love for the sport of volleyball to be a huge bonus for Lady Jacket volleyball in 2021.

“She definitely brings an energy and a passion for volleyball that I think is something that will be beneficial and helpful to our program,” Hall said. “Being from Cleburne herself, she knows the strong tradition we have in volleyball, and we want to get back to that level of having playoff runs and being that competitive.”

In addition to King’s passion and love for the game, she also boasts an accomplished playing résumé from her time as a Lady Jacket. King was a three-time All-Johnson County superlative performer, earning defensive player of the year twice and server of the year once, in addition to multiple all-district accolades for volleyball and basketball.

“I think her being able to take that freshman volleyball group and build on what they learned from her and worked with her last year will be a good transition,” Hall said. “[CHS Head Volleyball Coach Rachell] Pope is excited about having somebody that has that volleyball knowledge as a former Lady Jacket that Hannah does. She had the ability. She could’ve gone and played at the college level if she wanted to and I think that’s something when we’ve had conversations before she wishes she had done that. Her love is definitely volleyball, so that’s a bonus for the volleyball program.”

In December 2015, former Cleburne Head Volleyball Coach Timmi Blackshear had the highest of praise for King after her senior year with the Lady Jackets: “Hannah has left an incredible legacy of service, leadership, how to be a good teammate and what Lady Jacket volleyball should look like.”

King said she realized right away when she got into teaching and coaching that she wanted to be at the high school level.

“Once I returned to CISD, I knew I wanted to take the coaching route to CHS as soon as the opportunity came about,” King said. “I had heard there were positions opening at CHS towards the end of my first year at Smith, and I put my name out there to let them know I was interested. It was exciting that everything worked out.

“I’m most excited this year for the new relationships I’ll get to make with the athletes that love volleyball as much as I do and also the relationships with such a great coaching staff. I’m looking forward to returning to my Alma mater and spreading my passion for volleyball and also what I learned while being a student-athlete. I mostly look forward to inspiring young female athletes to be the best versions of themselves on and off the court and grow to love the game even more.”

King, who will be teaching English III at the high school, said while she’s looking forward to helping Lady Jacket volleyball improve, she’s also focused on helping prepare her student-athletes for life beyond sports.

“My long-term goals with teaching and coaching is to continue to spread my knowledge on the court for volleyball and prepare kids for college and the real world as well,” King said. “I cannot wait to see where the future takes me, but most importantly, to where it takes the kids I get to teach. Once a Yellow Jacket, always a Yellow Jacket.”