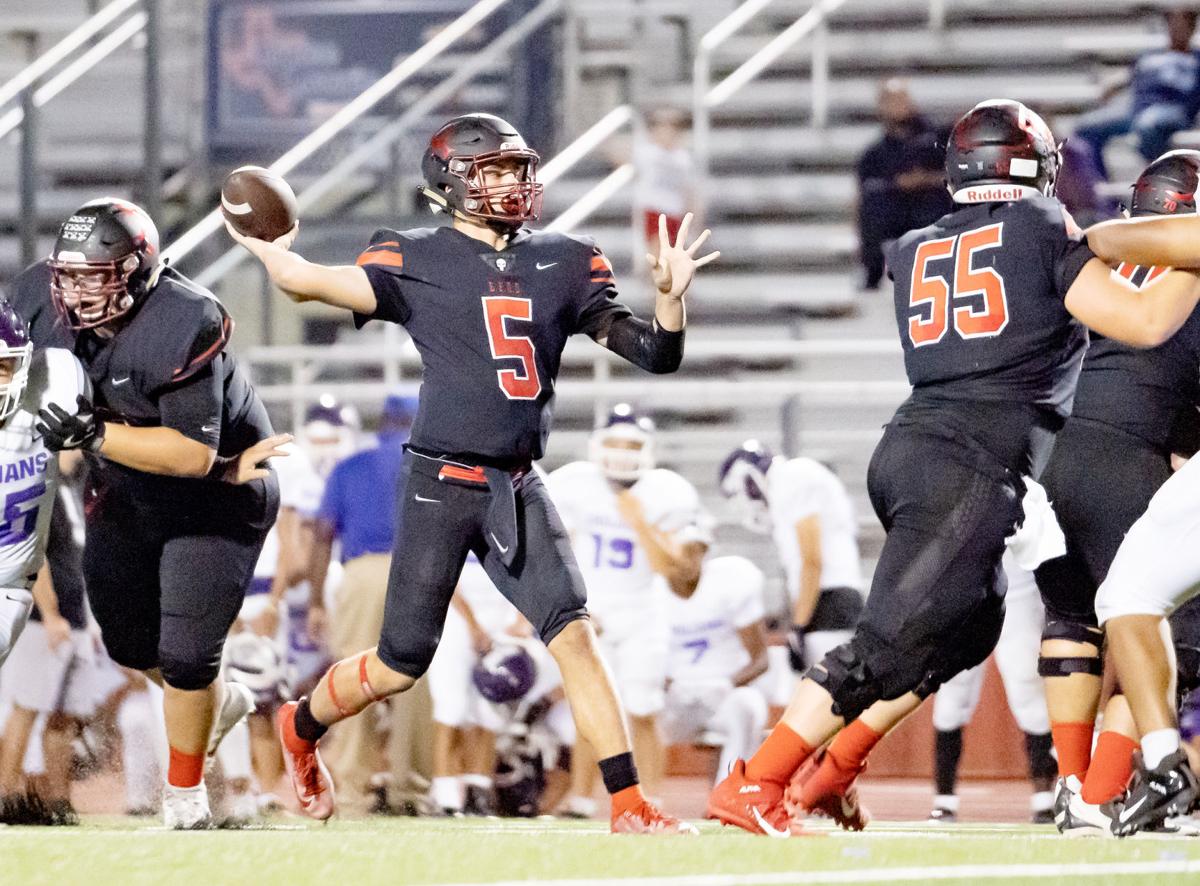 Centennial head coach Kyle Geller said the No. 1 key for the Spartans is to contain Burleson quarterback Blake Myers. 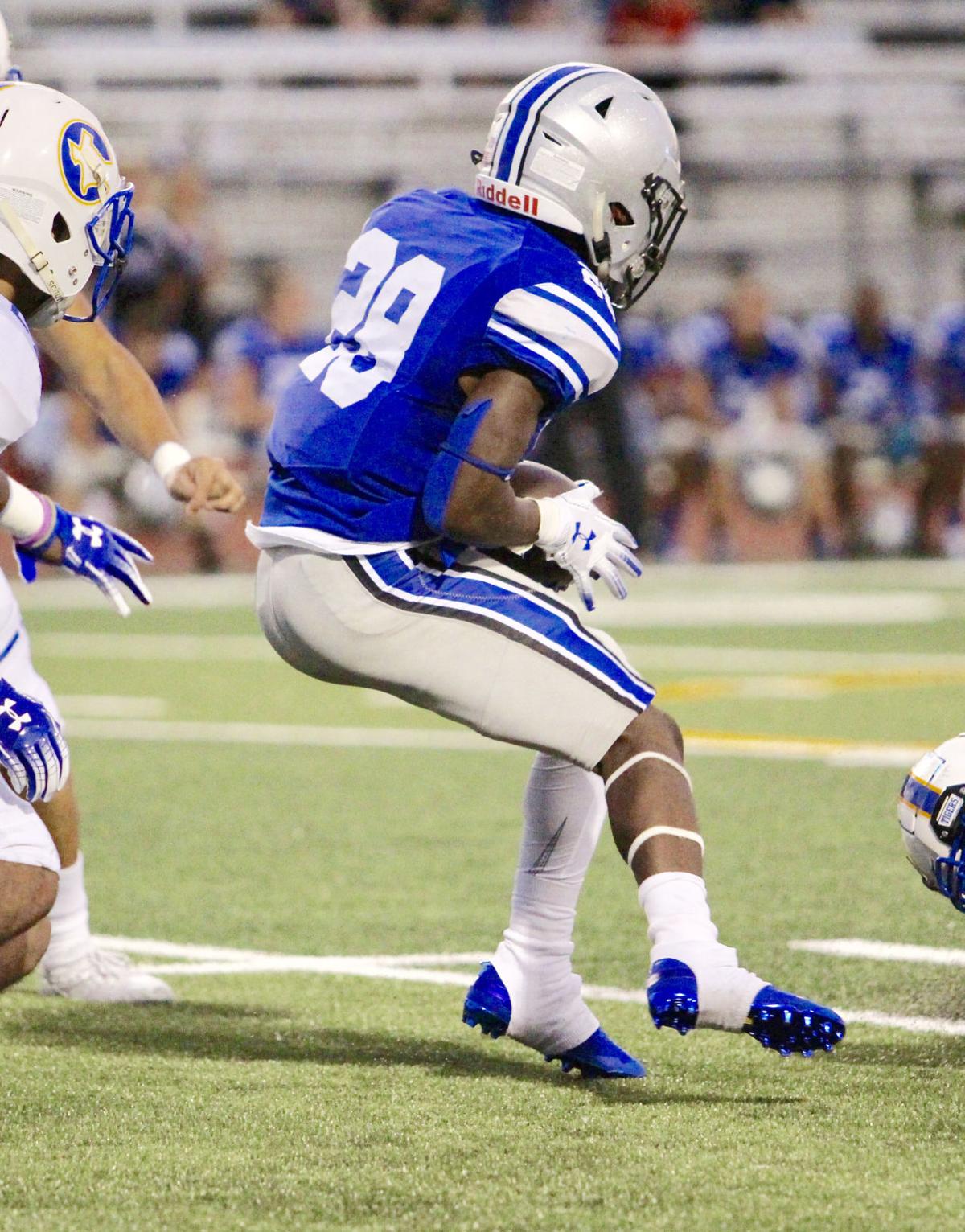 Jeff Kirven and the Burleson Centennial Spartans will try for a second straight win over rival Burleson to even the all-time series at 4-4.

Centennial head coach Kyle Geller said the No. 1 key for the Spartans is to contain Burleson quarterback Blake Myers.

Jeff Kirven and the Burleson Centennial Spartans will try for a second straight win over rival Burleson to even the all-time series at 4-4.

BURLESON — It’s the eighth edition of the “Battle for the Boot” between Burleson and Burleson Centennial, and, as has been the case recently, there’s plenty on the line for both the Elks and Spartans.

The two teams, each with playoff expectations, carry a combined record of 9-1 into the showdown, just like last season’s meeting. The Elks are 5-0 overall and 3-0 in District 5-5A DII while the Spartans are 4-1 overall and 2-1 in district play, their lone loss to No. 1 Aledo.

Last season, Centennial came away with a 21-7 win over Burleson, and the Spartans went on to finish second in district while the Elks missed the playoffs by one game. Like last year, this meeting between playoff hopefuls carries heavy implications.

“If we can get this one here, it just really puts us in a prime position to be one of the top seeds out of our district for the playoffs,” Centennial head coach Kyle Geller said. “That’s a big deal for your path. If you’re a 3- or 4-seed, you’re going to play a much tougher opponent rather than being a 1 or 2.”

“For us, the win puts you in a really good position for a playoff spot,” Burleson head coach Gary McElroy said. “Not that not getting a win puts you in dire straits. But the magic number in this district to get in is five wins. So if we get the win this week, that just puts us one win away. It would obviously, looking on down the line, be a lot less stressful as far as that goes.”

Last season, Burleson was 5-0 entering a week 6 showdown with the Spartans. A loss to Centennial was the first of four straight defeats for the Elks, who fell out of the playoffs. But McElroy said he believes Burleson is better equipped for what’s to come this year compared to last year, mostly due to a tougher non-district schedule. Last year, Burleson blew out its two non-district opponents by a combined 96-22.

This year, Burleson came away with challenging wins over Copperas Cove (41-38) and Denton Braswell (42-30), a Class 6A team and a Class 5A Division I team, respectively.

“I think we’re in good shape,” McElroy said. “... I don’t think there’s any false sense of security now like we had last year. We know what a good team looks like and we know how to play against a good team, unlike last year.”

The Elks lead the all-time series against the Spartans, 4-3, although Centennial has won two out of the past three meetings. While there’s always a little extra incentive in crosstown rivalries, both Geller and McElroy said it’s not something they focus on leading up to the game.

“I don’t want to lie and say it’s not a big game for our school and kids,” Geller said. “It’s like I told them on Saturday, I respect the crosstown rivalry thing. You want to beat them and there’s motivation for that. But as a coach, I told them I’m not going to play up this game like it’s something extra. I’m going to prepare for this game like I do every week. I respect everything about a rivalry game, but my job is to prepare you, so let me prepare you and you can take care of the rest.”

“Kids are different these days,” McElroy said. “I don’t know if they even know what the count is on who’s won and who hasn’t. Obviously we know we didn’t walk away with a win last year. But they all mark this one on their calendar. I think they’re up for the challenge and they feel good about it. ... We don’t want this game to be bigger than what it is. But at the same time we talk to them about the avenues this opens up with a win. I think they understand what’s at stake and they’re excited about playing this one.”

For the Spartans, containing Burleson quarterback Blake Myers and his dual-threat ability to throw and run is a top priority.

“That’s the strength of their team is their offensive skill,” Geller said. “Their QB can run and throw, and he does a great job of both. They have two good running backs. And they have a couple really good receivers that I was impressed with; they catch the ball well and run good routes. We will have to play well defensively and try to contain those guys.

“Putting pressure on their QB is definitely a big deal. They’re going to run him in pre-designed run plays along with the read game. It’s a tough scheme when you put it all together. If you try to concentrate too much on one person, the QB is going to hurt you really bad. Getting pressure on him in the passing game is definitely a huge plus and just getting him out of his comfort zone.”

McElroy said preparing for Centennial’s flexbone offense is a tough task, and that’s before factoring in the explosive playmaking ability of Jeff Kirven, Jaylon Jackson and Chris Mosley.

“As far as the scheme, it takes a lot of discipline from a defensive standpoint and a lot of eye discipline,” McElroy said. “You can’t let your eyes wander. You have to react off what your keys are. You’ve got to be disciplined with what you’re doing. The first time you lose focus on what you’re supposed to do, that’s when they hurt you. That’s No. 1 for us.

“And then you’ve got to corral those three players. They’re good players. They’re fast and they run the offense well. So we’re going to have to be good open-field tacklers. You don’t see this offense every day. There’s not but a few schools around that run it.”

While most football games are won or lost in the trenches, the No. 1 goal both Geller and McElroy said this week was winning at the line of scrimmage.

“They’re a well-coached team and coach Geller and his crew do a great job over there,” McElroy said. “They play hard and they’re good at what they do. They have some really good football players on their team. We’re going to have to handle the line of scrimmage from an offensive and defensive standpoint.”

“No. 1 we need to have consistency on offense; we can’t come out flat,” Geller said. “We have to win the line of scrimmage. If we do that, we can move the football. Defensively, the No. 1 thing is containing that QB and that starts up front.”

Kickoff between Burleson and Centennial is scheduled for 7:30 p.m. from BISD Stadium.