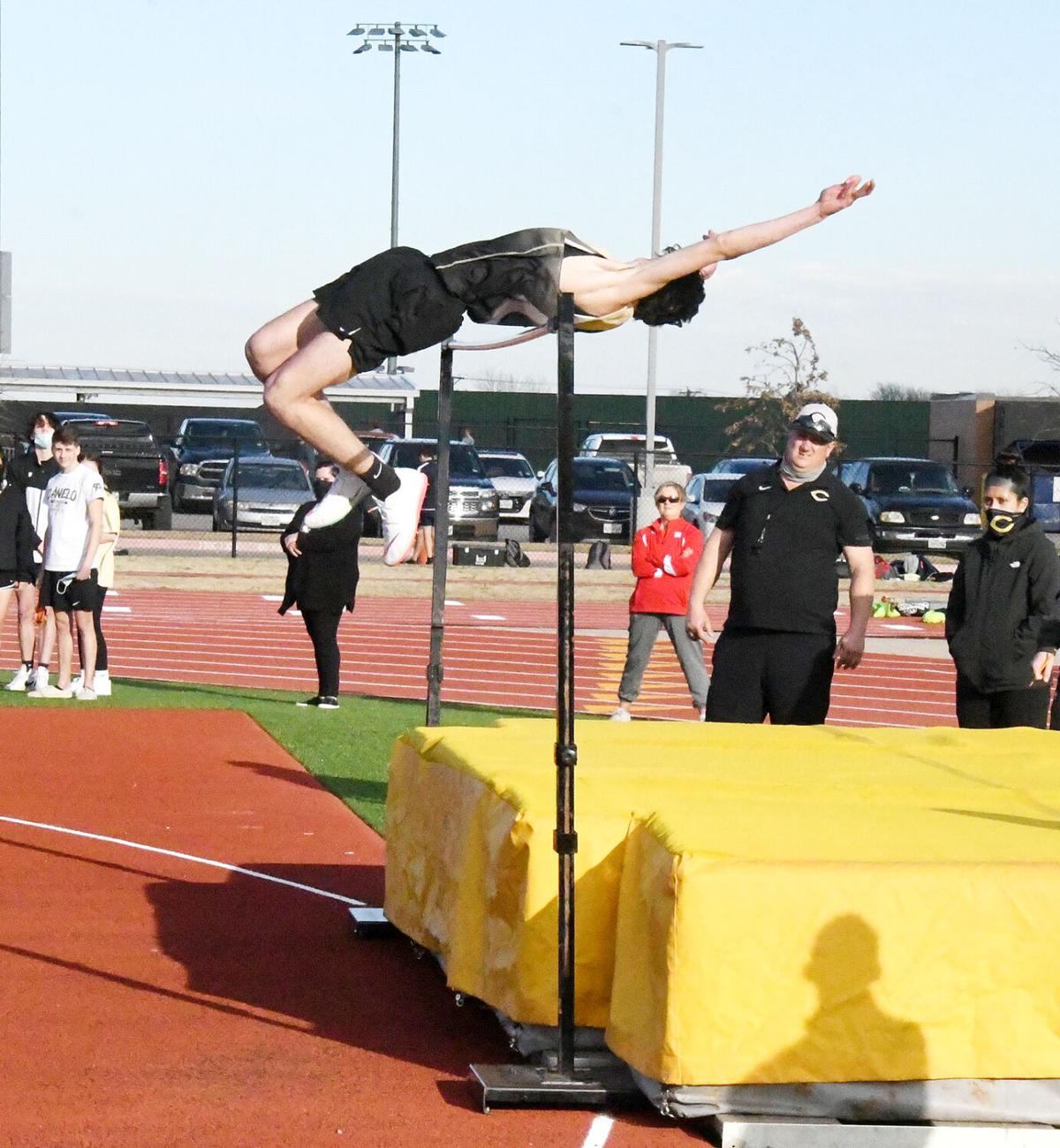 Cleburne’s Noah Mayfield is one of Class 5A’s top high jumpers and should be in contention to win a district title in the event at this week’s District 14-5A championships, scheduled for Wednesday and Friday in Joshua. 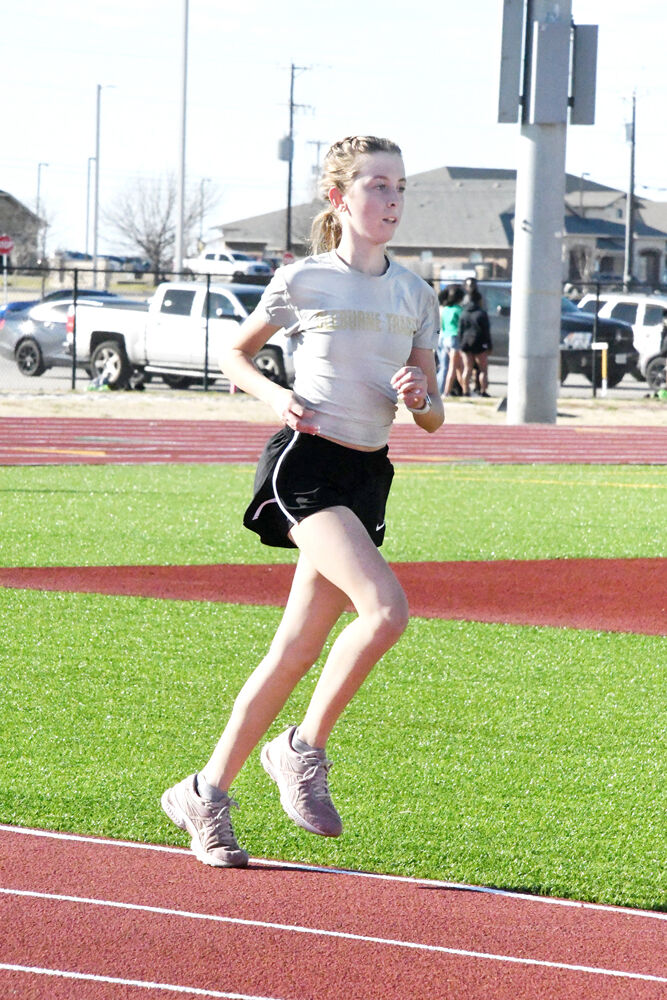 Cleburne’s Emma Dudley is a talented freshman runner for Lady Jacket track who will try to medal at this week’s district meet.

Cleburne’s Noah Mayfield is one of Class 5A’s top high jumpers and should be in contention to win a district title in the event at this week’s District 14-5A championships, scheduled for Wednesday and Friday in Joshua.

Cleburne’s Emma Dudley is a talented freshman runner for Lady Jacket track who will try to medal at this week’s district meet.

The Cleburne Yellow Jackets and Lady Jackets each enter the District 14-5A track and field championships this week feeling confident about the progression they’ve been on throughout a 2021 season with many obstacles.

The 2021 track season has been different from others due to COVID-19 restrictions, which have limited meets from the start of the season, if not canceled meets. From the boys’ side, Moss has been encouraged by Cleburne’s participation.

“We take about 50 kids to a meet when we have a full meet,” Moss said. “Obviously this year’s been a little weird with COVID rules and restrictions so we’ve had varsity-only meets. We’ve had probably over 70 different kids compete at some point or another. It’s been really good. We’re pretty excited about that.”

On the girls’ side, Fuller said he wishes he would’ve had a few more female athletes come out but he’s pleased with the track athletes that have been committed to the program.

“Participation has not been what I expected,” Fuller admitted. “I was hoping to get more from cross country, soccer, softball or powerlifting. I have about 35 total; 14 varsity girls and the rest are JV. But for the ones I do have out, they have been great at doing whatever we’ve asked of them.

“But I have been extremely pleased with what we have been able to accomplish. We had our first meet canceled due to weather, but super thankful we were able to get some meets in with COVID limiting everyone. We started the year off slow at Justin Northwest finishing seventh, then fifth at our Marshall Young Meet. The girls continued to work hard and it’s shown recently, as we’ve won our last two meets scoring 187 points at Arlington High and 122 points at Arlington Oakridge.”

The Jackets have been in contention, from a team standpoint, in nearly every meet they’ve participated in.

“We won the Arlington meet as varsity boys and got runner-up as JV so that was really cool going up against some 6A schools,” Moss said. “The Justin Northwest meet was a tough meet with very, very high quality schools there. I think there were over 13 teams and we finished right in the middle. Given the competition we were going up against, I was completely pleased with that. At our meet, we got third place and, again, there were some quality schools here.”

While track is viewed mostly as an individual sport, team success is still largely important. And Moss admitted he wasn’t sure how things would go this season for the Yellow Jackets after the graduation of a key athlete as well as a couple of key injuries.

“With KD [Smith] leaving, he was a huge part of what we had last year,” Moss said. “He single-handedly got us 20 to 30 points a meet last year. So any time you lose a kid like that, you expect to come out a little worse. We’ve had a lot of things happen to us since COVID last year with losing key guys. I was a little concerned with how we were going to respond but I’ve been very pleased. We’ve had some young guys step up in key spots. As far as the team goes, we’re having a better year this year than we did last year. That comes with the same coaches being here for more than one season and building a rapport with kids and it creates an atmosphere where the kids want to come out and compete. It’s been a blessing honestly because I was a little concerned before the season started how it was going to look but all in all I think it’s been a great year.”

One of those athletes who suffered an injury has stepped up in a different event this year, a perfect example of the selflessness that Moss beams with pride about with his track squad.

“Jace Felton was tops in the region in the triple jump last year but this year he had a bad Achilles injury over the summer and he’s just recently getting done with his rehab,” Moss said. “He kind of had to change the way he jumps, trying to adjust. He came to me because he knew he wasn’t going to be the same and he asked what else he could do and I said, ‘How about you try hurdles?’ He’s the best guy hurdler we’ve got right now and he’s running a good time. He’s got a chance to get points for us at a district meet which is huge for a guy who didn’t do hurdles last year. He’s athletic, he’s long, he’s tall and it’s not as rigorous doing triple jump on a bad Achilles. He’s taken it and literally run with it. That’s the kind of stuff the team is doing that makes it fun to coach is everyone’s bought in asking, ‘What we can do to help?’ We’ve put kids in different things asking them to learn new events. We’ve had some voids and we’ve thrown kids into the fire and they’ve done a great job of responding.”

Moss also bragged on an athlete he considers the Jackets’ team leader in Tyler Long.

“I want to talk about a guy who means a lot to me and to this program, Tyler Long,” Moss said. “He’s a sprinter for me. He’s mainly a 200 guy but he’s offered to run the relays because we had some guys who didn’t come out or aren’t at school anymore for whatever reason. He’s doing whatever he’s been asked to do. He’s the coach when the coach isn’t around. Track is a spread-out sport and the coaches can’t always be around everyone. I give him a set of duties and things to get done while I’m checking on other kids and he does a great job. He’s my eyes and ears and voice. If it’s not coming from me, it’s coming from him. He’s been a huge help and he’s having his best year so far. He’s got a chance to get out of district in the 200 and the 4x1 and 4x2. Both of those teams have a great chance to get to area. He’s the heart and soul of what we’re doing.”

The Jackets also have high hopes in the high jump thanks to a dominant season so far from Noah Mayfield, who has improved on his impressive 2020 campaign before COVID canceled spring sports.

“Noah Mayfield is the No. 1 5A high jumper right now,” Moss said. “He’s cleared 6-foot-5 in a meet. He’s cleared 6-6 in practice multiple times. He has an extremely good chance of going to the state meet and competing for a medal at the state level. It’s going to be really exciting to see how he closes out the season. He has a chance to really make some noise. And from what I understand, it will be the first time in a while Cleburne’s boys track has a chance to send someone to the state meet.”

Cleburne also has a strong mix of experienced seniors and talented underclassmen in athletes like senior Gavin Naquin to freshman Landry Lay.

“Gavin Naquin has a really good chance to get out in the 800,” Moss said. “He’s been great all year. It says a lot for a senior to come out and run track. By the time they get to me as a senior, they’ve tapped out and they’ve already specialized. He’s one of those guys that said, ‘I’m a senior and I know what I’m doing but I still want to compete.’ He comes out every day and runs his butt off. It’s a rarity for a senior. He’s still hungry. He’s on the mile relay team, too.

“Another guy I want to talk about is freshman Landry Lay. He is a pole vaulter. What I want him to be spoken for is his work ethic. He is now our best pole vaulter. He’s cleared 10 foot. He’s earned a spot on varsity and has now earned a chance to get points in a district meet against some district foes that have really good pole vaulters. He’s gone above and beyond with his work ethic. He works hard every day at practice. He’s been our most improved trackster from the very start of the season to now. He’s just a freshman and we’re really excited about his potential and work ethic. The sky literally and figuratively is the limit for him.”

Moss believes the Jackets can push for a top 3 finish at the District 14-5A meet if Cleburne’s relay teams can medal. The Jackets’ relay unit has gone through several changes during the season but Moss likes the group they’ve put together entering district in Jacarrean Gray, Jason Pugh, Anthony Terronez and Long.

“We’re running a team that has changed a lot,” Moss said. “We’ve got it fine-tuned now that we’re confident everyone’s going to be there and they’ve been working together for four weeks now. They’ve really bought in. They hold each other accountable. And they’re always ready.”

On the girls’ side, the Lady Jackets also have benefitted from a mix of talented newcomers and more seasoned upperclassmen.

“Senior Abby Naverrete has been great for us all year,” Fuller said. “She has the fastest time in the open 400 with a 1:02.27. She also anchors our 4x400 relay which has placed first in multiple meets. Freshman Emma Dudley has been solid all year starting with cross country where she advanced to the regional meet. Her success has continued on to the track where she runs the two-mile and mile. She currently sits in the top 5 for both in district. Freshman Jentry Sullivan is another one I get excited about. There is nothing she can’t do on the track. She can run the two-mile all the way down to the 100-meter dash with success. It’s rare to have that kind of range. She also long and triple jumps. She’s currently ranked fourth going into district in the 800. She’s also the first leg of our 4x400 relay. Sophomore Marlie Marshall has continued to improve since last year. She’s had success in the 100, 200, relays and high jump where she’s finished first multiple times. In high jump, she’s got a chance to advance beyond district.”

Fuller said he’s confident in what the Lady Jackets’ relay teams can do at the district championships.

“Our 4x100, 4x200 and 4x400 relay teams have been the strongest part of our team,” Fuller said. “Haley Jaquez, Chloe Reed, Marlie Marshall, Abby Naverrete, Elena Fojtasek, Bianca O’Bryant and Jentry Sullivan have a big part of our team success.

“I expect us to continue to have success at the district meet. The competition will be some of the best in the state starting with Midlothian. I expect several individuals and relays to make it out to the area meet. Overall, I’m hoping as a team we finish in the top 3.”

The District 14-5A track and field championships are scheduled for Wednesday and Friday at Joshua’s Owl Stadium. Field events will start at 10 a.m. both days.