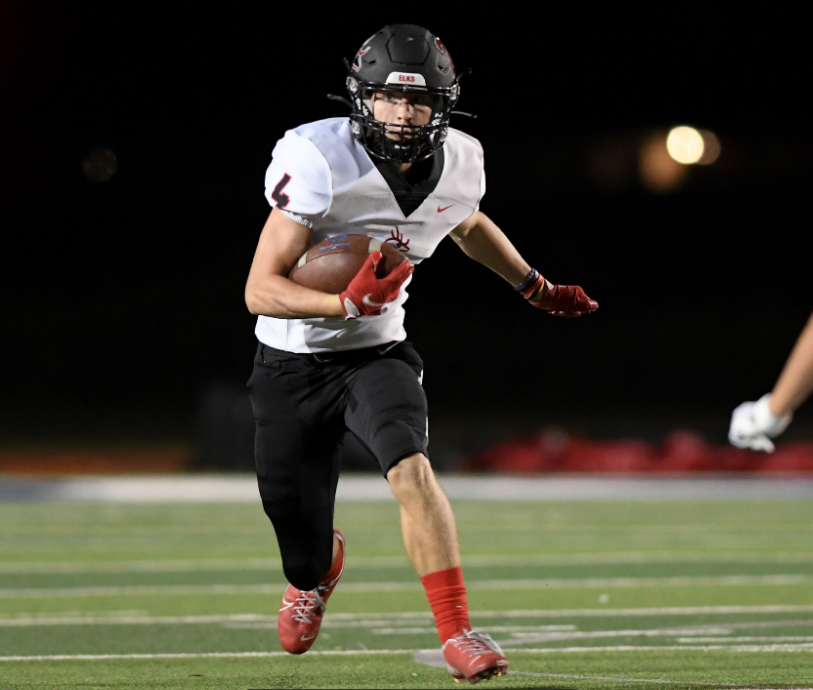 Luke Peterson had 193 receiving yards and three touchdowns on six receptions to lead Burleson to a district-opening win Friday at Joshua. 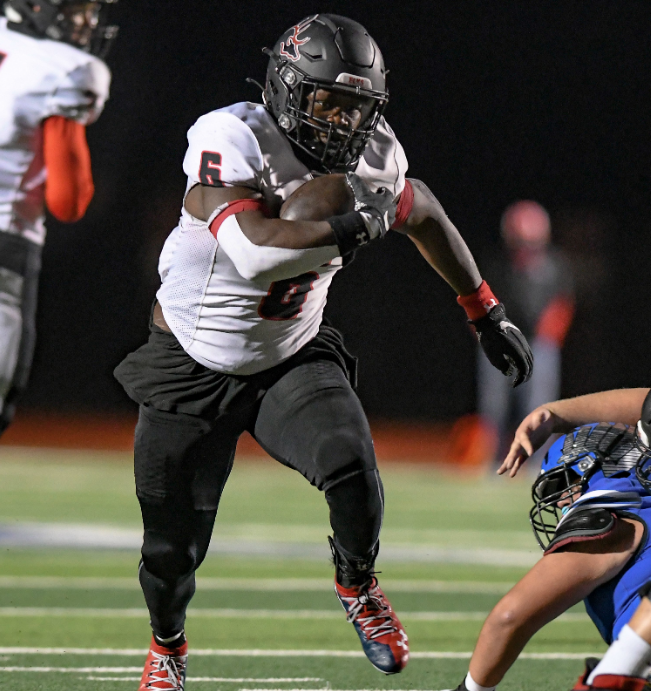 Burleson running back Jarrett Austin found the end zone three times and rushed for 143 yards in the Elks' 69-14 victory at Joshua.

JOSHUA — The Burleson Elks rolled up 596 yards of total offense on their way to a district-opening 69-14 victory over the Joshua Owls on Friday at Owl Stadium.

Burleson wasted little time as Joshua muffed the opening kickoff and the Elks recovered at the Owls 23-yard line. Three plays later, Jarrett Austin scored the first of his three touchdowns from six yards out to put the Elks on the board first just a minute and a half into the game.

On the ensuing possession, the Elks forced the Owls to a quick punt. Burleson inadvertently touched the ball as it rolled on the turf, and Joshua hopped on the loose ball at the Burleson 31. The Elk defense held, and after a Joshua punt and an unsportsmanlike conduct penalty, the Elks were backed up to their own 11-yard line. However, on the next play, senior quarterback Jalen Kitna aired one out to Luke Peterson for an 89-yard touchdown, and just like that, the Elks were up 14-0 with 5:34 left in the first.

It was the first signs of a big night for Kitna and Peterson, who returned after missing the previous two games.

Joshua turned the ball over on downs on its next possession, and Kitna made the Owls pay with a 28-yard touchdown strike to Aswan Bonner to make the score 21-0 after one quarter.

The second quarter saw Austin scored his second touchdown of the night from 15 yards. After another Joshua punt, Kitna connected with Peterson once again for a gain of 42 to set up Austin's third touchdown run, this one from 10 yards out, to give the Elks a 35-0 lead with 3:44 left in the first half.

Joshua put together its best drive of the half as the Owls moved all the way to the Elks' one-yard line with the help of a Tyler Stone first down catch and multiple penalties on Burleson, including two unsportsmanlike conduct infractions. However, the Owls fumbled the ball right at the goal line.

The Elks then took the ball and drove 99 yards, culminating with another Kitna to Peterson touchdown pass, this one from 19 yards out, with just 52 seconds left on the clock, to put the Elks up 42-0 at the half.

Joshua forced the Elks into a fourth down on the next drive. It looked like the Owls were going to drop Kitna for a loss, but the senior quarterback broke a tackle and scrambled for the first down. He then hit Peterson once again for a three-yard score, his third of the game, pushing the Elk lead to 49-0 after three.

Elk junior running back Quintlon Ivory spelled Austin in the second half, and after first-down runs of 17 and 13 yards, he scored from three yards out to make it 56-0 just seven seconds into the fourth quarter.

Joshua finally got on the board in the fourth quarter as Smith hit Tyler Stone for a 27-yard touchdown pass.

The Elks countered with two more touchdown runs, one from fullback Trenton Blew and the other from backup quarterback Chris Cook to make it 69-7.

The Owls closed out the scoring on a one-yard quarterback sneak from Smith to make the final 69-14.

Kitna went 9-of-13 for 332 yards and four touchdowns. Austin led the Elks rushing attack with 143 yards on 15 carries. Peterson had 193 yards on just six receptions.

For Joshua, Smith threw for 142 yards and one touchdown. Cameron Conklin led the Owls in rushing with 10 carries for 48 yards. Stone caught six balls for 95 yards and a touchdown.