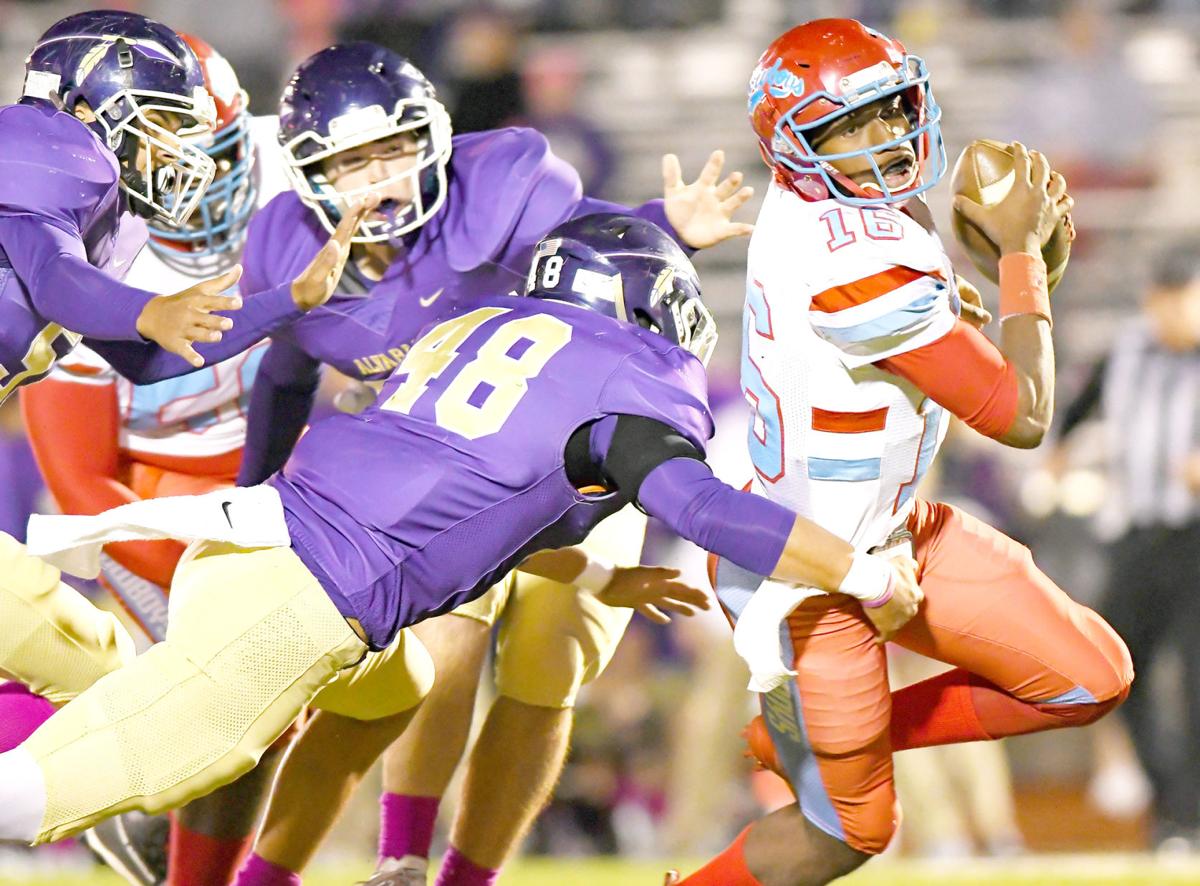 Alex Rodriguez (48) and the Alvarado Indians face a tough No. 4 seed in Paris their playoff opener at 7:30 p.m. Friday at Ron Poe Stadium in McKinney. 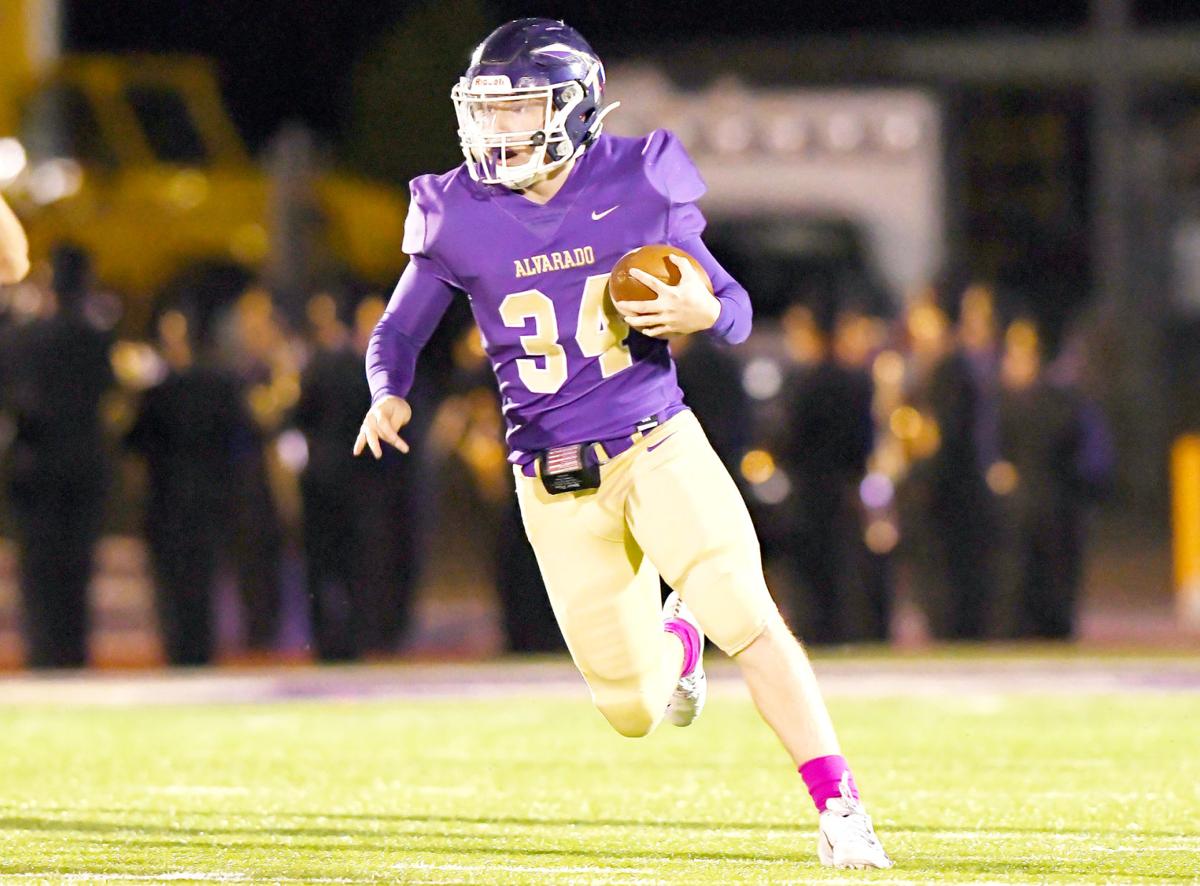 After rushing for 2,120 yards and 22 touchdowns, Alvarado senior running back Colby Sampson and the Indians’ rushing attack will face their biggest challenge of the season in Friday’s Class 4A Division I bi-district playoff game vs. a tough Paris defensive line.

Alex Rodriguez (48) and the Alvarado Indians face a tough No. 4 seed in Paris their playoff opener at 7:30 p.m. Friday at Ron Poe Stadium in McKinney.

After rushing for 2,120 yards and 22 touchdowns, Alvarado senior running back Colby Sampson and the Indians’ rushing attack will face their biggest challenge of the season in Friday’s Class 4A Division I bi-district playoff game vs. a tough Paris defensive line.

ALVARADO — Consistently great programs aim to win district titles for a variety of reasons, but chief among them is drawing a more favorable first-round playoff opponent. While Alvarado won its first district championship in seven seasons, the Indians’ playoff opener won’t be easy, even in a 1 vs. 4 matchup.

“Their record is very misleading,” Alvarado coach Jeff Dixon said. “I think our kids are smart and they see it for what it is. Pleasant Grove is a recent state champion and they were in the state final last year; those guys are unbelievable. But Paris could have beaten them. They scored a lot of points against Argyle and played well against Melissa. That fourth seed can be misleading because Paris will win first place in most other districts in Class 4A.”

The Indians enter their bi-district battle with Paris on an eight-game winning streak and feeling confident about their chances, even in a brutally tough region.

“I’ve been impressed with our kids,” Dixon said. “They’ve handled every situation this year, including the grind we had in our first four games; when you lose the first two, they could’ve easily have doubted, but they didn’t. They just went to work. Ever since, they’ve gotten better. Even grinding through the not-so-strong part of our district, they didn’t slack off any. I think they’re in a good place and they’ve been preparing well this week.”

After reaching one of their goals of ending their district title drought, now the Indians look to get back to the playoff success that is the standard in Alvarado. But the Indians haven’t tasted playoff experience since 2016, their last playoff win.

“Championships are hard to come by if you don’t play well,” Dixon said. “And we happen to be in a region that’s very difficult. If we don’t bring our best each week, then it’ll be short-lived. Now having said that, I think we can win. If we can win this first round, I think we can win the second round and then you’re almost to December and anything can happen. I think if we continue to improve, the sky is the limit for this group.”

Dixon said what most stands out about Paris is their overall team athleticism, their ability to run the ball, and their defensive front.

“First of all, they’re very athletic,” Dixon said. “It’s not like we haven’t seen that. Wilmer-Hutchins is a good ball club and a very talented ball club. Paris reminds me a lot of Wilmer. The difference in the two is Paris runs the football very well and that’s what makes them dangerous.

“Their defense is fast, like Wilmer’s. But I don’t know if you’re going to find one in the state of Texas with as much talent up front that Paris has. Defensively they’re sound but what really makes them dangerous is how well they can run the football.”

Paris averaged 39 points per game this season on offense and Dixon said they utilize a difficult offense to defend.

“They’re very much like Kennedale,” he said. “It’s what used to be a traditional offense, but it isn’t anymore. It’s a Slot-T, Wing-T type of offense. It’s kin to that philosophy. They’ll pull a lot of linemen. They’ll play action off of it and that will hurt you.

“The part that’s critical is for our kids to read their keys and trust their keys. If they do that, they’ll cause havoc and there will be no place for those guys to run. Now you’re creating second and long, and third and long. It’s hard enough to convert on third down when you’re having to do it running the football, it’s tough. So trust your keys, and if you do that you’ll prevent the big play from happening.”

While Alvarado boasts one of the more well-known rushing attacks around, Paris is similar to the Indians in that they also want to possess the football, so Dixon said the ball control battle will be key.

“We don’t want to give them a lot of snaps so offensively we have to control it ourselves,” Dixon said. “They’re like us; they run the football and chew the clock up as well, so we will have limited snaps offensively. We can’t squander any opportunity offensively and we can’t shoot ourselves in the foot with penalties and turnovers.”

“Their front 4 is as probably as talented as any we’ve seen,” Dixon said. “Their two tackles are big, fast, and really can control the front. It’s going to be a battle. Games are won in the trenches — just ask the Cowboys who lost to the Vikings because Minnesota whipped them in the trenches. It’s the same deal. If we can’t establish the run game, it could be a long night.

“But our linemen accept that challenge. They’ve had a really good week so far. The kids are locked in and I think our O-line is up for the challenge. It’s not going to come easy, but four yards. That’s what we’re looking for. Get positive yards on first down. We feel like if we do that, we’ll control it.”

While Alvarado’s identity is certainly in its run game, Dixon said if quarterback Josh Syrus, tight end Peyton Alvey and receivers Jake McCullough and Cale Svendsen can continue being efficient in the passing game, that will help give Sampson and the run game some breathing room.

“They’ve been doing that pretty much all year,” Dixon said. “Our throwing percentage is as high as it’s been in a long time. We don’t throw much so when we do throw, they seem to catch everything. If we can keep them off balance a bit where folks have to honor us, that’s a big help. People don’t always see that in our offense, but our passing game is critical, certainly in playoff time because teams are going to be good up front so you have to loosen them up.”

Kickoff between the Indians and Wildcats is scheduled for 7:30 p.m. Friday from Ron Poe Stadium in McKinney. The winner moves on to the area playoffs against the Brownwood-Castleberry winner.