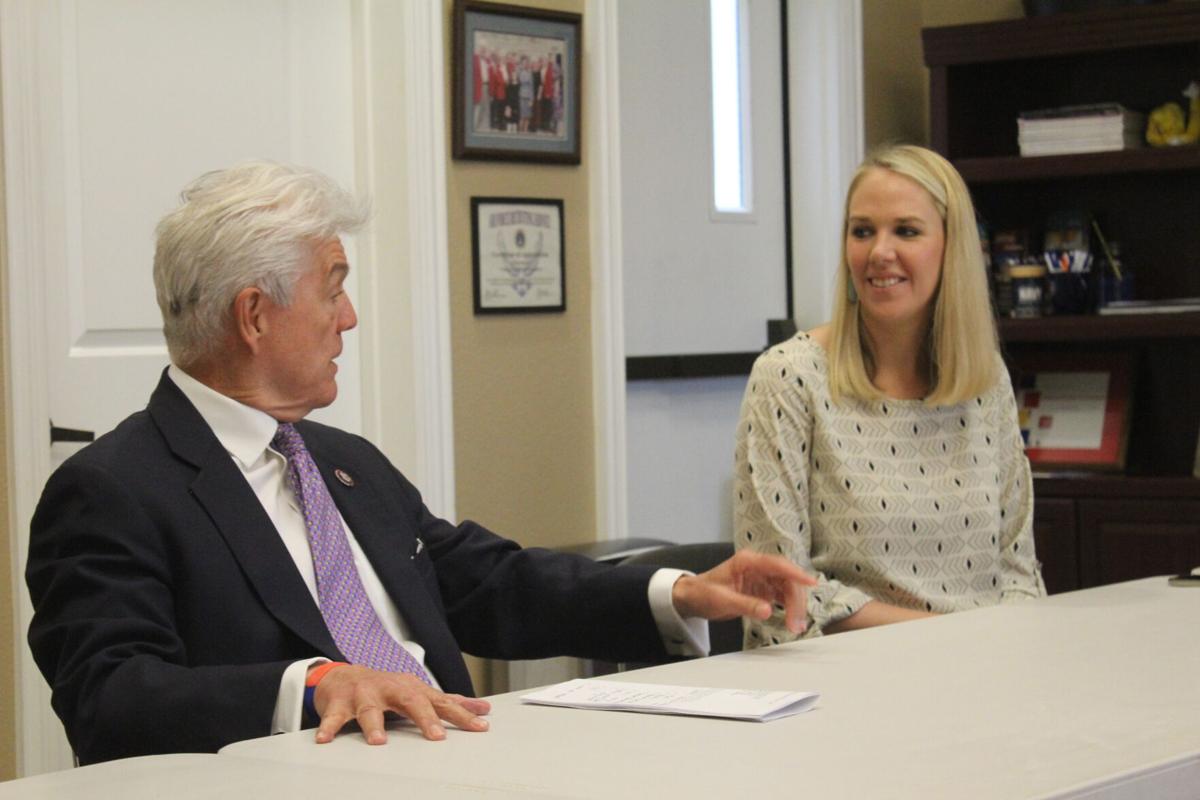 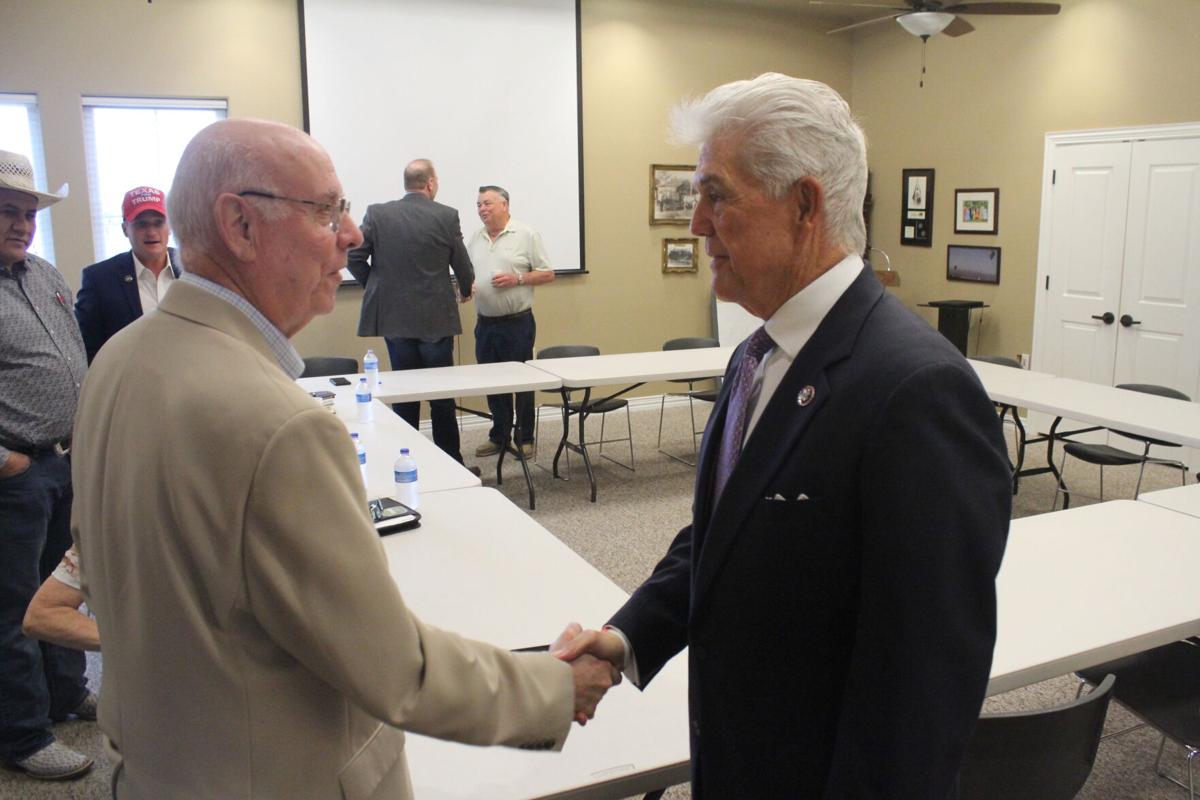 Chuck Bailey, owner of U & D Enterprises, left,  visits with U.S. Rep. Roger Williams, R-Austin. Williams delivered an update and fielded several questions during a roundtable discussion with area business owners on Tuesday at the Cleburne Chamber of Commerce.

Chuck Bailey, owner of U & D Enterprises, left,  visits with U.S. Rep. Roger Williams, R-Austin. Williams delivered an update and fielded several questions during a roundtable discussion with area business owners on Tuesday at the Cleburne Chamber of Commerce.

“It’s hard to believe I’ve been in Congress 10 years,” Williams said. “That’s longer than I thought I would be. I ran then because I didn’t think anybody was fighting for small businesses.

One of the participants, Chuck Bailey, owner of U&D Enterprises, opened the meeting with prayer but first spoke of the importance of discussing faith with members of the younger generation.

Williams agreed, adding that he believes it’s important to trust in God and remember that God is in charge.

“But I was thinking,” Williams said. “How in Washington right now [the Democrats] are trying not to allow us to say, ‘In God We Trust’ in the hearings that we have. When we swear witnesses in, in other words. The Democrats have gotten away from that. Isn’t that unbelievable?”

Williams added that he makes it a point to incorporate the phrase during his speeches.

Williams, who serves on the Congressional financial services and small business committees, delivered an outlook less than rosy for the immediate future but not one without hope for the long term.

“I’m one of the most positive guys there is,” Williams said. “But this is the reality. We’re business people and we have to face that.”

Williams likened 2020 and this year as the difference between day and night based upon the change of administrations.

“There’s that old saying that elections have consequences,” Williams said. “I think this brings that out even more so because look at what’s happened in the past three months in our country.

“President [Joseph] Biden inherited a great economy. I’ve been in business 61 years and I never saw anything like that. He also inherited a pretty secure border. He inherited all that and now the rest is history.”

The United States, Williams said, had the highest tax rate in the world in 2015. Williams added that he introduced a program called Jump Start America in 2012 calling, among other things, for tax cuts.

Williams said that after former President Donald Trump took office in 2016 and jumped on the “cut tax bandwagon” America went from the highest to the lowest tax rates.

“What that did was create something I never thought would or could happen,” Williams said. “We created more jobs than people in this country. We were literally hunting for people to work and we were bidding for them.”

Williams claimed that the Democrats now threaten that economy.

“We had a great business plan,” Williams said. “But now we get a new administration in and the first thing they talk about is raising taxes. And let me tell you, this is going to slow our economy down. Their whole idea is to put the burden on Main Street America. They want to put the burden on profitable industries because the feeling is if you’re making a profit you’re hurting somebody. If you’re making a profit you’re doing something wrong and you need to be penalized.

“So we’re going to see a tax increase and we’ve got to be ready for it.”

Williams went on to describe the southern U.S. border as a disaster.”

“I’ve been down there almost every year since 2005 when I was Texas secretary of state,” Williams said. “If you go down there it puts tears in your eyes to see what’s happening. Our border patrol is overwhelmed. Some of the buildings down there are at over 700 percent capacity. The drug trafficking is unbelievable. It’s controlling everything down there.

“The problem is that all those drugs are making their way up here and they’re going to destroy a generation of our children. There’s abuse of young children by these coyotes that their parents are paying $10,000, $15,000 to bring them over. We have people coming over with COVID-19. They’re not getting checked.”’

Such should not be the case, Williams said.

“The wall was working,” Williams said. “Stopping catch and release was working. People were going through the ports of entry not between because they were told by leadership in America that we want them to realize the dream of America but that we are a land of law and you have to abide by the law.

“Our border patrol was telling us things were getting better. We had the president of Mexico working with us by putting troops down on the border of Central America because that’s where a lot of these folks were coming from.”

Williams said that many in the country illegally have been released and remain unaccounted for and added that Biden’s decision to halt construction of the border wall only makes matters worse.

“The problem [with those entering illegally] is that we feel pain for these folks but at the same time, when the first decision you make to come to America is to break the law, I have a problem with that.”

Williams decried the fact that several are being housed at Fort Bliss and the Kay Bailey Hutchison Convention  Center in Dallas. Williams said he wrote a letter to Biden opposing plans to house others at Fort Hood.

“We have military secrets out there,” Williams said. “We have weapons. We’ve got 50,000 kids down there training. We don’t need a bunch of [immigrants] running around. We have all these firing ranges with ordinance that may not be exploded. You get some young person walking around out there they can get hurt. So we don’t need this.”

“Everyone of us is for infrastructure,” Williams said. “Infrastructure is highways, bridges, airports, rail. Let’s fix it. We need it.”

On the up side, Williams said he has a bill with bipartisan support calling for $10 billion to increase broadband access.

“Take Lampasas County,” Williams said. “There 27 percent efficiency is all they’ve got. The money would go to the states then let the states go to the counties to see what they need. Lets the states control the money instead of the federal government.”

Williams voiced concern over the 100,000 students who drop out of high school each year in Texas and called for more emphasis on technical and trade school instruction. Cleburne High School, Williams said, is doing a good job in that regard.

Williams called House Resolution 1 possibly the most dangerous bill in the history of our country.

“It would federalize all our elections,” Williams said. “Whereas the states now, as you know, control our elections, which is the way it should be and the way our founding fathers wanted it to be. Under this the federal government would run all elections and draw the congressional lines. The bottom line is they want to do this because you would never have a Republican president again.”

House Resolution 8, Williams said, would “take the guns from you” and create a gun registry.

Such claims aside, Williams said he remains hopeful.

“We live in the greatest country in the world,” Williams said. “You don’t see anybody getting on a boat to leave here. You see people coming here. But we have to fight because we’re losing our sovereignty. We’re losing our history through cancel culture. It is time to fight. I think it’s our generation’s Valley Forge. We have to stand up.”

The goal now, Williams said, is the 2022 mid-term elections.

“I believe we can get the House back. I think people are beginning to realize they may have made a mistake. I think that will start hitting home once they begin to see more taxes.”

Ella Mae Walker of Midland passed away April 14, 2021. She is survived by daughter, Etta Hulsey and husband, Moss; grandson, Tyler; and other family.