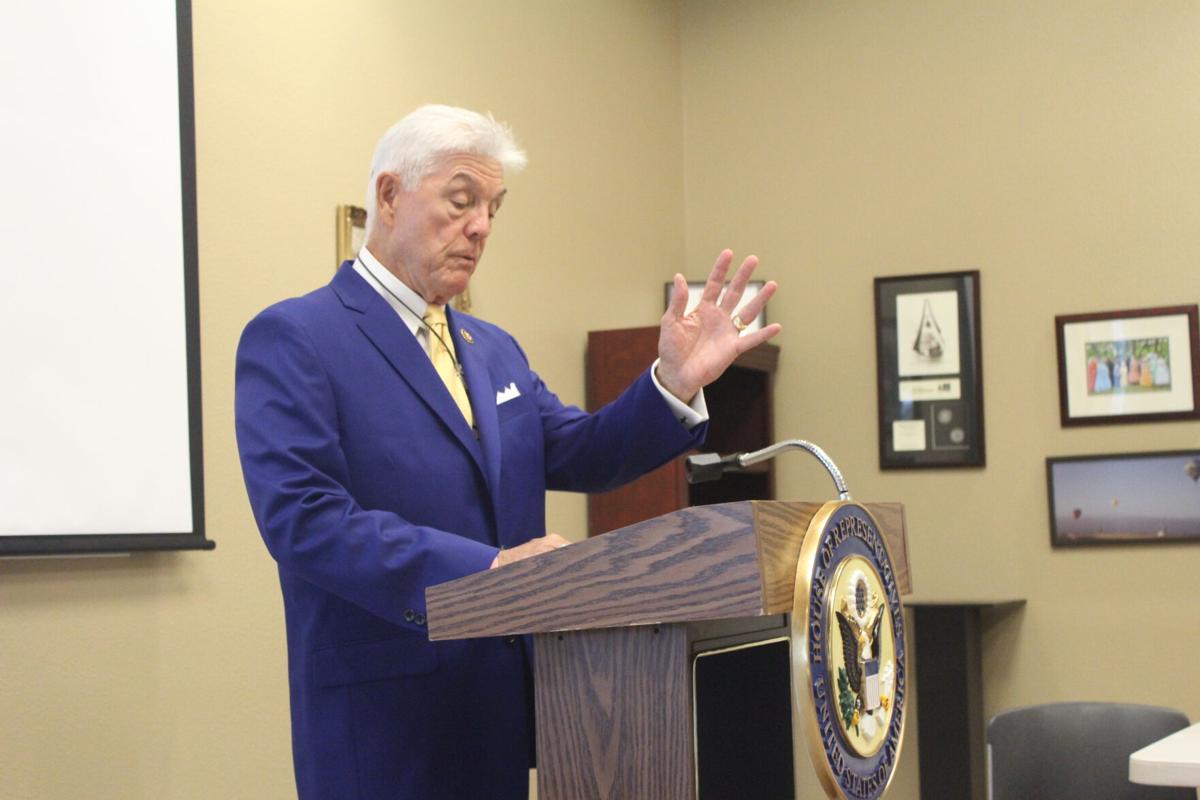 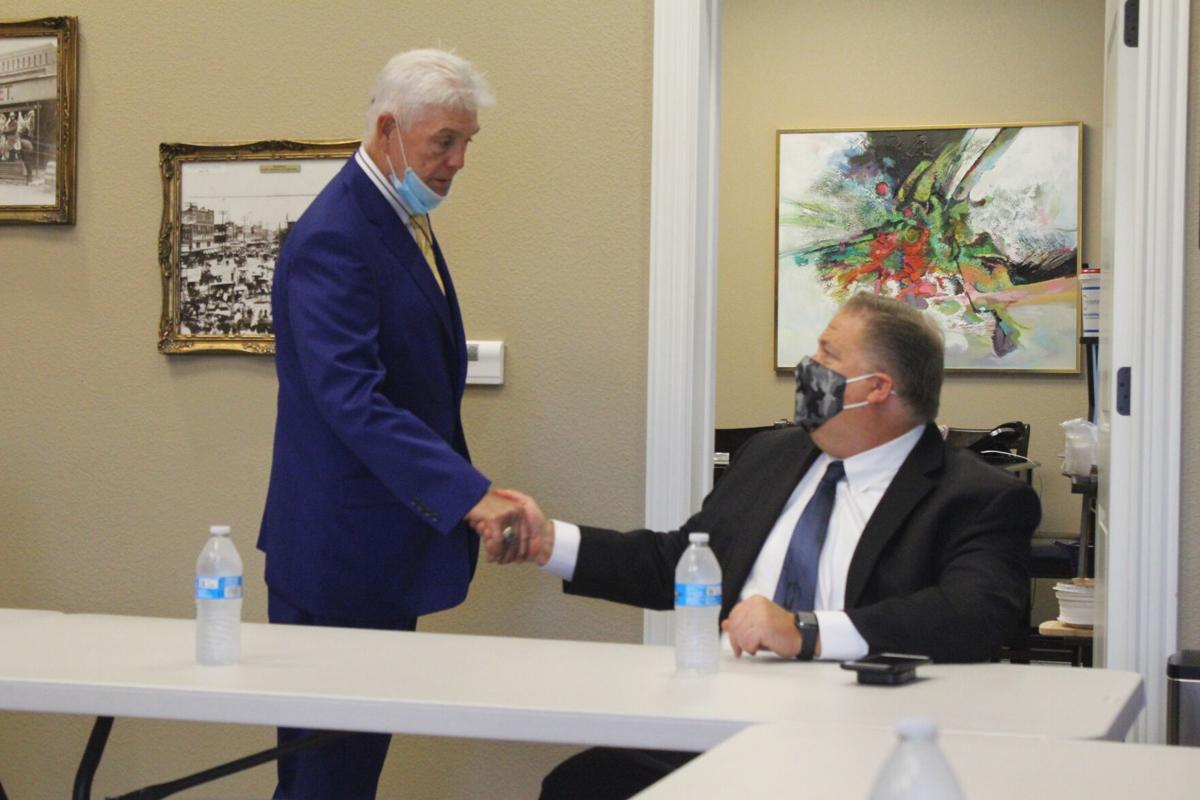 “I’m talking about getting back to normal,” Williams said. “Because I’m telling you, masks and all that is not a new normal. We’re going to get back to normal.”

Williams addressed, but mainly listened to, community officials during a Sept. 10 roundtable at the Cleburne Chamber of Commerce. Up for discussion were the effectiveness of the Coronavirus Aid Relief and Economic Security, or CARES Act, and other programs undertaken to combat the economic and social ravages of the pandemic.

“In the beginning weeks of the virus as it spread across the United States we new that Congress needed to do something immediately if we were going to prevent a collapse of our national economy,” Williams said. “Through that we provided Texas and Congressional District 25 direct relief to keep our economy afloat during this unprecedented time, and I think we remain healthy as we begin to rebound from the virus.”

“Reports indicate that the CARES Act and other steps taken are working,” Cash said. “Unemployment in Johnson County before the pandemic was about 3.5 percent, which was probably close to a record for us in the last 15 years.

“In April it increased to about 14 percent. Then a lot of stimulus money began flowing in through the Payroll Protection Program and actual stimulus checks to individuals. That, with other components of the CARES Act, led to unemployment dropping.

“It fell to 11.1 percent in May. The latest report, which is for August, shows Johnson County at 7 percent, which for me is good indication that the CARES Act is working and doing what it’s supposed to do.”

Cash called the Payroll Protection Program, or PPP, a success. The program provided aid to small businesses in the form of forgivable loans.

Several local companies were able to reinstate employees they laid off thanks to the program, Cash said.

“One of our pretty large manufacturing companies saw the need to reduce their workforce,” Cash said. “But they applied for PPP, got approved and were able to keep their staffing at the same pre-COVID level of around 300 workers. Had that company shut down, that would’ve affected a lot of companies around Cleburne.”

Cash also credited donations from private individuals as well as food distribution and other programs undertaken by the Cleburne Railroaders, local churches and other organizations. Programs that in many instances helped individuals who might not otherwise qualify for CARES Act assistance.

County Judge Roger Harmon said Johnson County received about $4.1 million in CARES Act funding. The county spent about $600,000 to purchase personal protective equipment for county fire departments since many lack the budget to do so. The county also awarded several $5,000 grants to small businesses in unincorporated county areas that were hit hard by the COVID-19 shutdown and other economic factors related to the virus.

Williams praised local teachers and school administrators for their continued efforts toward educating children under trying at best circumstances.

“In April when we realized we could be shutdown for quite some time not realizing it would be all of the school year from March 13 forward, the board granted us permission to purchase 6,000 Chrome Books,” Heath said. “We needed to get reliable devices to our students to start the school year. The CARES Act will help us pay 75 percent of that, almost $1 million.”

Cleburne Municipal Airport Manager Sharlette Wright said the funding covered the city’s match portions for FAA grants used for maintenance and repair costs for runways and other airport infrastructure. That’s important, Wright said, given that city revenues, which would normally pay the match, have decreased because of the pandemic.

“As much as our community is growing, it’s very important that we have our airport up to speed,” Williams said. “Because that’s where a lot of your growth is going to come from.”

“Multiply that by the number of families and you’re talking a lot of people we were able to help through a government program,” Williams said. “I’m not a big supporter of government programs, but this one did work.”

Alan Crawford, owner of Rangaire Manufacturing in Cleburne said he’s not a fan of government intervention in private industry either and debated whether to apply for a PPP loan.

“This was probably the biggest uncertainty I’ve faced since I’ve taken ownership of this business,” Crawford said. “We started out this year the best we’ve ever done. January, February and March were outstanding and I was pumped for the year. Then this Coronavirus hit.”

Given that his business is a trailing industry in relation to what’s happening with the economy, Crawford said he ultimately applied for and received the loan.

“It’s a good thing we did because April, May and June have been pretty significant hits to our revenue,” Crawford said. “The PPP did exactly what it was meant to do for us. We were able to hang on to people even though our sales were slowing down.”

The loan, Crawford said, allowed his company to retain workers, pay workers during a week-long shutdown to deep clean Rangaire’s manufacturing facilities and even pay bonuses to workers whose spouses had lost their jobs.

“We didn’t have to lay off anybody,” Crawford said. “We in fact added some the last months because our jobs have grown as our orders have started to pick back up. I’m cautiously optimistic that we’re starting to get past the hum here and staring to see some return to normalcy.

“The PPP funds were a big help to us. At the end of the day, the best thing we can do for our employees is give them a job that they can continue to come and work and we’ve had a lot of people who expressed that to us.”

The possibility of a second round of stimulus programs remains in the air for now, Williams said.

“Nobody talks much about this but there’s still $130 billion in the PPP program that hasn’t been used,” Williams said. “That program ended Aug. 8 but we need to figure out how to use that money. Then we need to cut taxes even more.”

“Right now there’s no protection form anyone coming into any of your businesses here and saying, ‘I went there and I got Coronavirus.’” Williams said. “Well, all the sudden there’s a lawyer involved, a lawsuit involved and you’re trying to defend yourself, could be sued out of business.”

Williams the Save Our Stages bill he coauthored.

“And it’s bipartisan for crying out loud,” Williams said. “One of my Democratic colleagues, Peter Welch from Vermont, is also a cosponsor. We’ve got hundreds of signatures on it, which is unheard of.”

The bill, which has yet to be voted on, is similar to PPP. The bill sets aside $10 billion for music, stage play and other entertainment venues hard hit by COVID-19 shutdowns.

Roy Lee Martindale, 76, of Fort Worth passed away Thursday, January 14, 2021 in Granbury. No services are scheduled.