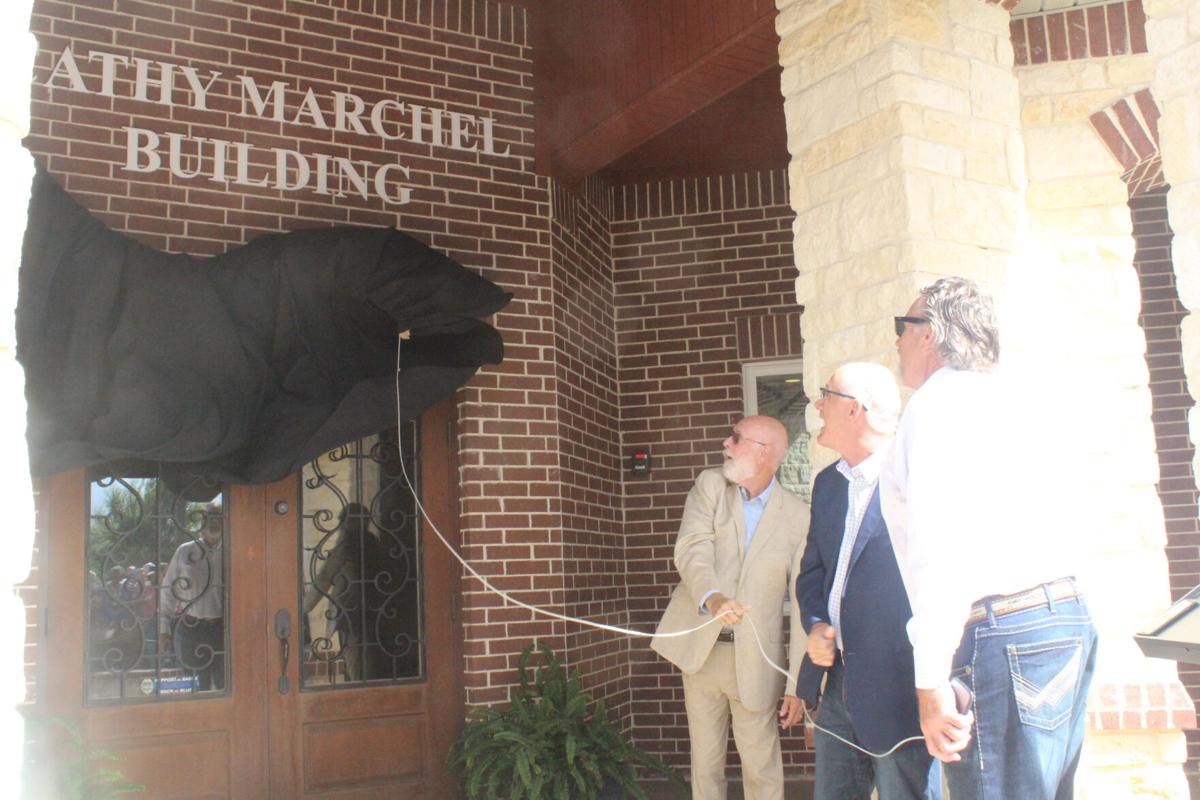 Justin Marchel, right, Cleburne Mayor Scott Cain, center, and Cleburne Chamber of Commerce Board member Chuck Bailey pull together to unveil the Cathy Marchel Building in honor of Marchel, who passed away in January 2020. 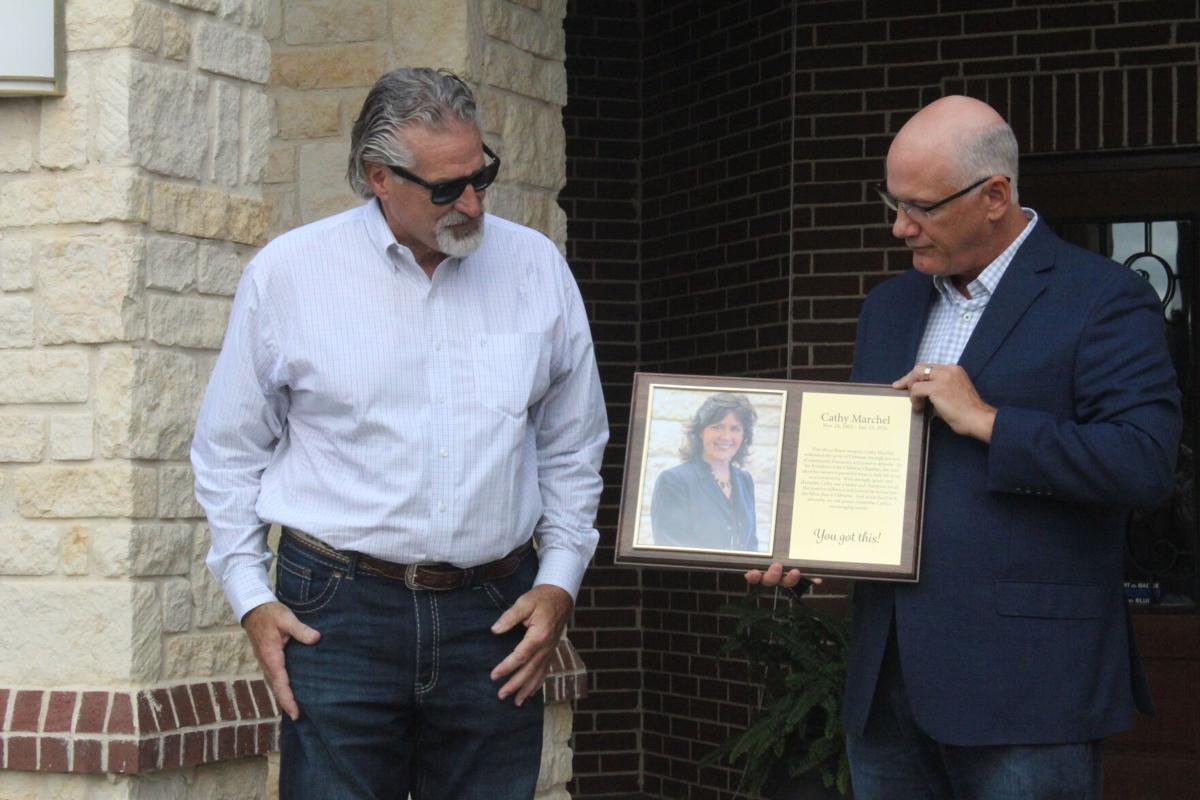 Justin Marchel, right, Cleburne Mayor Scott Cain, center, and Cleburne Chamber of Commerce Board member Chuck Bailey pull together to unveil the Cathy Marchel Building in honor of Marchel, who passed away in January 2020.

A crowd of family members, friends and local officials gathered Thursday morning in front of the Cleburne Chamber of Commerce to celebrate the life and legacy of Cathy Marchel.

“Cancer may have silenced her voice but her impact is always going to be felt within this community,” Cleburne Mayor Scott Cain said. “But today we’re here to share laughter and stories about Cathy and I urge you all to tell your favorite Cathy Marchel story. We may be here all day but it will be great.”

Marchel, who passed away on Jan. 15, 2020, at the age of 57 following a long battle with cancer, served as president of the chamber from 2005 until her death.

“She was something special,” Johnson County Sheriff Adam King said after Thursday’s ceremony. “Cathy touched a lot of lives in this community.”

As the ceremony concluded, Cain; Marchel’s husband, Justin Marchel; and chamber board member Chuck Bailey grabbed a rope attached to a large swath of black cloth covering the area above the entrance door of the chamber building. Cain asked audience members to chant, “one, two, three..We’ve got this!” as the three tugged the rope to unveil the building’s new name, The Cathy Marchel Building, to cheers from all present.

Cleburne council members first voiced approval for naming the chamber building after Marchel in January 2020, shortly after her passing. COVID-19 pandemic concerns increased not long after, however, and necessitated cessation of large event gatherings. Council members revisited the idea in April as pandemic concerns began to decrease and unanimously voted to the renaming.

“It’s truly a great day in Cleburne to finally get to do this,” Cain said of the pandemic-delayed ceremony.

Marchel, Cain said, summed up character and the Cleburne spirit.

“Cathy’s fingerprints have been all over this building and all over this community for many, many years,” Cain said. “I often get asked what it means to be a Cleburnite. What is it that’s so special about Cleburne? And really, if you think about Cathy Marchel, that’s what really expresses Cleburne.

“I think back over my years as mayor and knowing Cathy then and before then and all the things we did in the community together. She was always right there working. But we always had fun too. She wouldn’t let anyone just do work and let you have a sour face. It was always laughter and a lot of fun too.”

Cain and others several times quoted Marchel’s trademark phrase, “We’ve got this” and joked that Marchel was an encourager who held no qualms of prodding when necessary to prompt others to “get their big boy or big girl pants on and let’s get this done.”

Cain joked that, as mayor, he was hardly immune from Marchel’s work ethic and equally high expectations of others.

“I had that conversation a lot with her,” Cain said. “And, as her kids knew well, you weren’t asked if you would like to participate. But it wasn’t just family members. The whole community was often volun-told that we’re going to do this.”

Cain recalled how he voiced one concern when Marchel was under consideration for the chamber president position.

“I told [chamber board members] that the one problem we’re going to have if we hire Cathy as chamber president is that we’re not going to be able to keep up with her. And I can tell you today that was a true statement. She was the Energizer Bunny that just kept on going.”

Cain, among other attributes, credited Marchel for the strong partnership between the chamber and the city.

“Most cities don’t have that,” Cain said. “Usually they’re pitted against one another. But a lot of the way we work together here is because of Cathy Marchel.”

Cain thanked Marchel’s family as well for all they’ve meant to the community.

“I miss my friend,” Cain said of Marchel.

“Cathy built this chamber brick by brick,” Bailey said. “She truly did. If you think of the Cleburne Chamber of Commerce there’s not one of us who doesn’t think of Cathy Marchel. They are one and the same and always will be.”

Bailey recalled how, as a New England transplant, he couldn’t be more Yankee and yet Marchel was one of the first to approach and encourage him to serve the chamber as an ambassador.

“I didn’t know what the devil that was but I got involved and it never stopped from that moment on,” Bailey said. “Cathy had this way of just  reaching out and saying, ‘You’re not doing anything today. Come here. We’ve got something we need to get done.’

“And she’d get it done with your help. But she wasn’t just sitting on the side when it was getting done either. She never asked anyone of us to do anything ever where she wasn’t right there with us.”

The second part of the dedication involves a challenge, Bailey said.

“That’s to reach out to you,” Bailey told attendees. “We all need to dedicate ourselves to be just a little bit more like Cathy Marchel.”

Justin Marchel, as he approached the podium urged attendees to not start crying to which one audience member shouted “Too late.”

Marchel joked that he was his wife’s number one volun-told volunteer.

“On behalf of my family this is a huge day for us,” Marchel said. “We love Cleburne and Cathy loved Cleburne more than anything. She was always, even at home, trying to figure out how to make it better for somebody.

“She always put her words into action. We, as a family, got to be with her all the time. There weren’t very many times when she wasn’t the same way around us that she was with everybody else.”

Marchel thanked members of the Cleburne City Council and city and chamber staff for honoring his wife.

“It’s great to see this many people out here,” Marchel said. “On behalf of the family we’re very humbled and honored to have this building named after her.”

In addition to the chamber building’s new name, a plaque now hangs inside.

“So that future generations will know a little about Cathy and why this building was named after her and why this community loves her so much,” Cain said.

Cain presented Justin Marchel with a copy of the plaque as well.

“It’s my favorite picture of her,” Marchel commented as he admired the plaque.

Marchel, after the ceremony, joked that his wife would be “mortified” by all the fuss over her but, while he tried to keep his emotions in check, said that’s just fine with him.

“Knowing that my grandchildren, that my kids will be able to bring them here and tell them that this building was named after their grandmother and why,” Marchel said. “The impact Cathy had on this community is amazing to us and we’re just very honored by all of this today.”