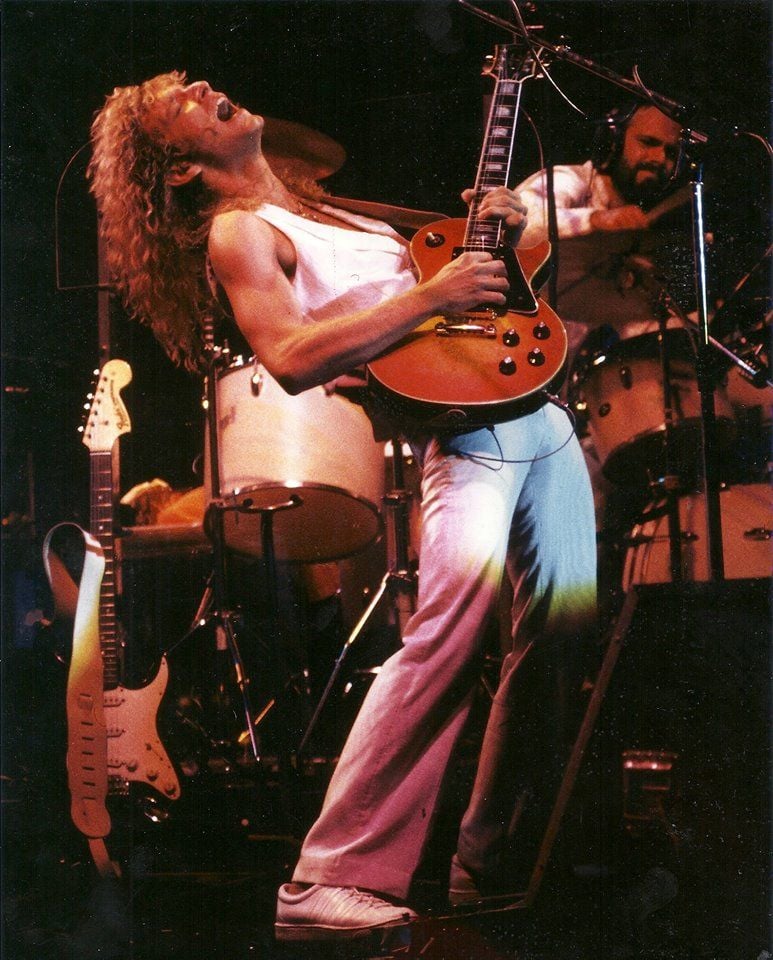 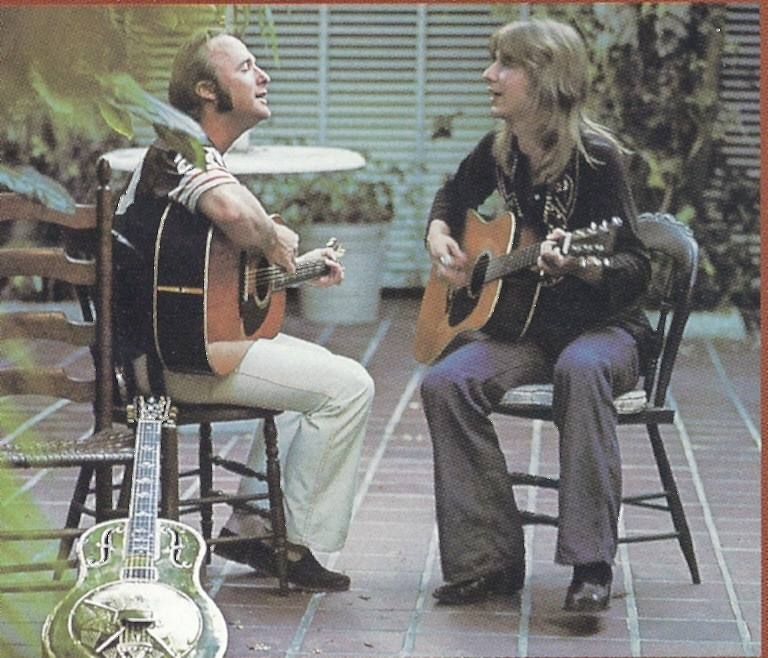 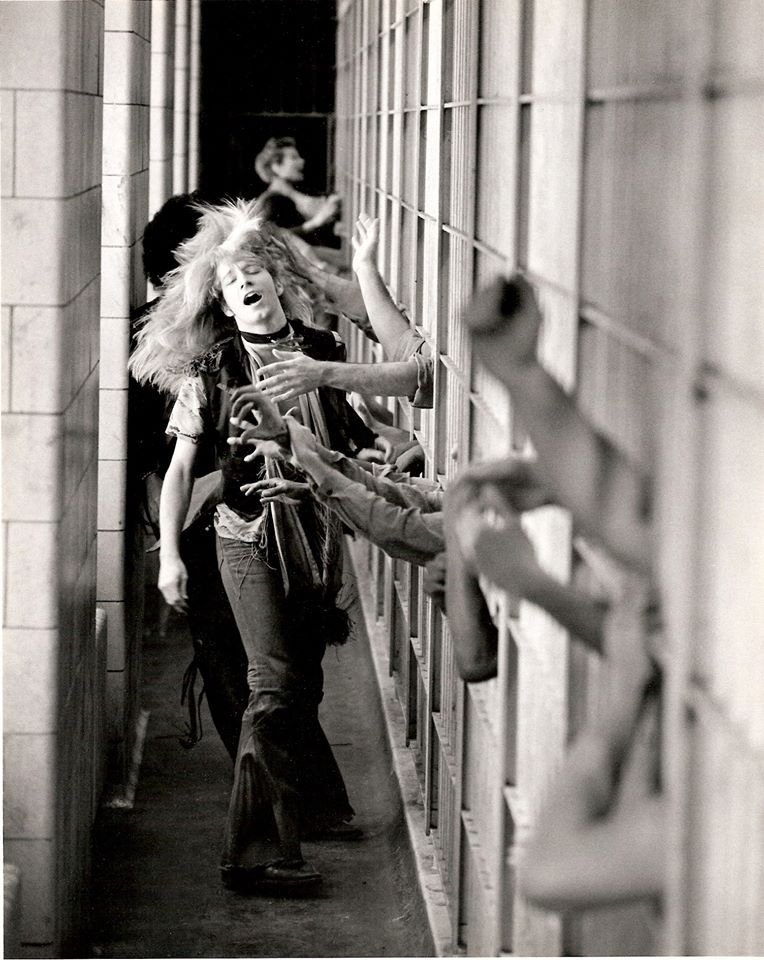 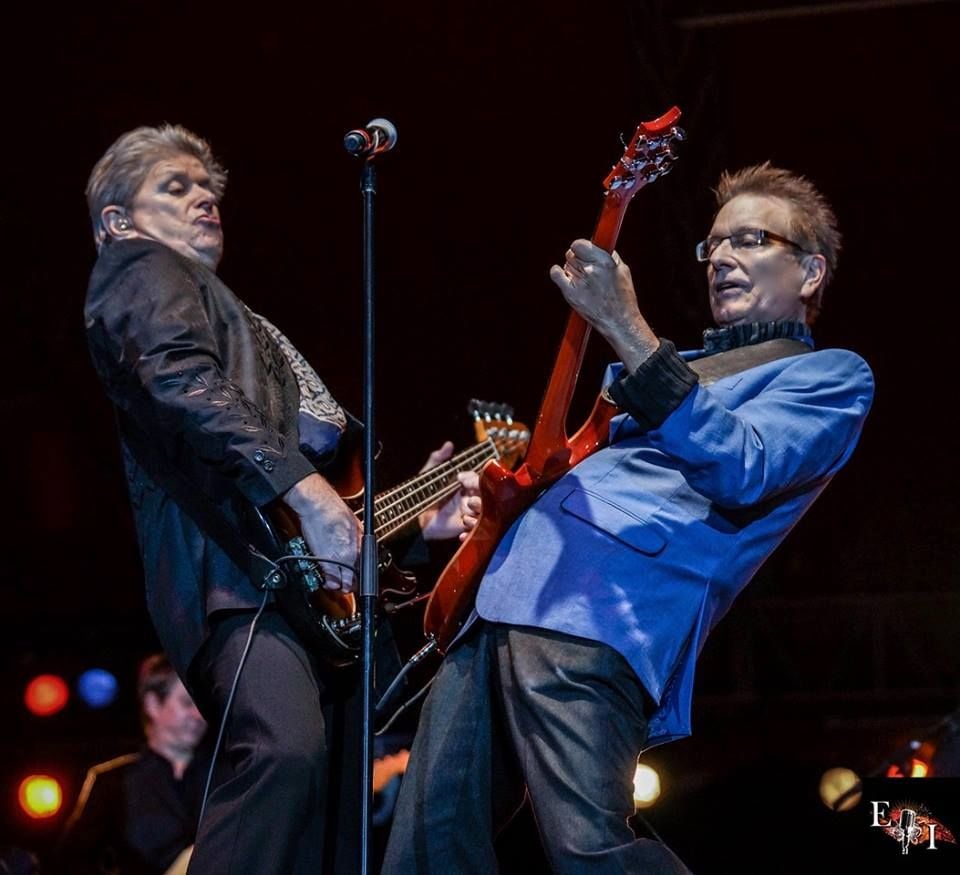 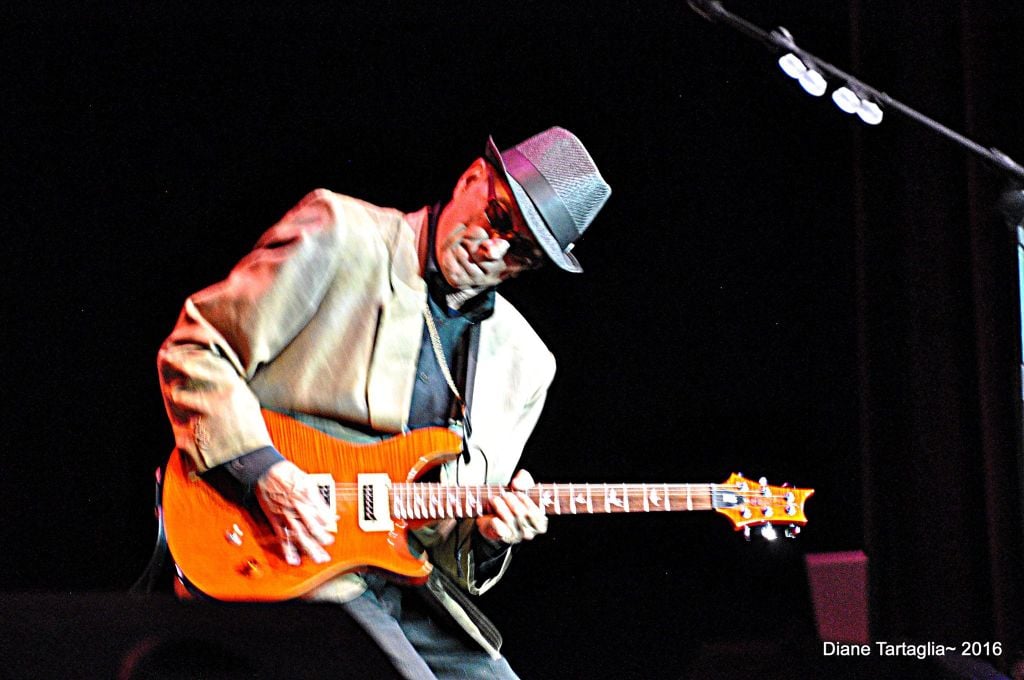 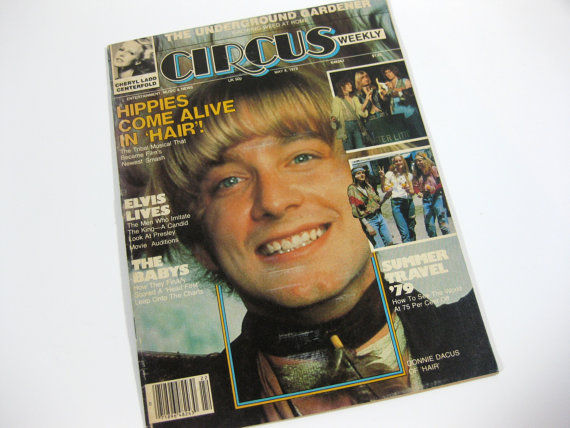 Former Cleburne musician Donnie Dacus said he can’t wait to see what happens on April 8 in Brooklyn when his former band, Chicago, will be inducted into the Rock and Roll Hall of Fame.

“Whether I’ll play, we’ll see,” Dacus said. “Some interesting things are in the works. One way or another I’ll be in the VIP suite.”

But his musical journey began way before Dacus’ Chicago days of 1978-80.

Envy sparked an early interest in music, or at least the guitar.

“When I was about 6 or so my cousin got a guitar and I thought if he gets one, why can’t I?” Dacus said. “He ended up giving it to me eventually. It was one of those old Montgomery Ward Airline guitars, white on black with a diamond profile. Coolest thing in the world right? Actually, it was a piece of crap, but a way to get my hands on a guitar.”

Young Dacus didn’t accomplish much with the guitar, not yet, football being more his passion of pursuit momentarily at least.

“Played at Adams Elementary,” Dacus said. “I was a little kid, but I could run fast so every once in a while they’d put me in for critical games.

“So we’re playing Cooke and they toss me the ball and I’m going for that touchdown. Man, I could see it. I could smell it. Something very large hit me really hard about then. Before that, you know, I was a kid. I just thought football was this cool, fun game, toss the ball and run around. But that first big-time hit. I started thinking, well, maybe it’s time to think about learning guitar again instead.

“Which, this was a realization my mother had already had apparently because she wasn’t crazy about me playing football anyway. So she agreed to get me a guitar if I stopped playing. So we went to Sears and got a Silvertone, three pickups, looked like a Les Paul, sort of, didn’t play well, but it was a guitar.”

The Donnie came later. Back then he was Jimmy Dacus, the name several of his former schoolmates and friends still refer to him as.

“I don’t know, I just never liked the name Jimmy even back then,” Dacus said. “My mom used to call me Donnie because, well, that’s my middle name. Somewhere later I just thought Donnie Dacus sounded cooler.”

Dacus said he figured out the guitar and taught himself to “kind of play” although he’s not sure how. He also signed up for piano lessons from a lady named Mrs. Adams.

“Wore those horned-rim glasses, remember them?” Dacus said. “Very sweet lady, like a mother figure. I remember her like it was yesterday.”

Dacus more or less memorized his music book and Mrs. Adams at some point told him that he already had the talent and didn’t need further lessons.

He could sing, was picked out of a group to perform “They Call the Wind Maria” from the Broadway show “Paint Your Wagon.”

“Picked out from a group of a lot of kids to do that,” Dacus said. “I didn’t know. I was 6 or something, not sure I even knew my name yet.”

Dacus was also already into music, at least to a casual degree, by that point, Duane Eddy, the Everly Brothers, Elvis Presley, who he would later meet.

“None of us would be talking about any of this if it wasn’t for the Beatles.”

Dacus picks up the story.

“I can tell you the day it happened, the night the Beatles were on the “Ed Sullivan Show.” Dacus said. “That’s when the bands started popping up everywhere, right after that. The next day, you know I had a flattop like every other guy back then, maybe an inch if that. Before the Beatles we’ve got our hair such as it was sort of slicked back, the surfer look. But I comb it forward the next day to go to school and, well, that was considered long hair at the time so I got sent home, which, my mother wasn’t very happy.”

In the Beatles’ wake garage bands aplenty sprouted in Cleburne and elsewhere. They were, as Charles Kraft noted in the March 11, 1966, edition of Cleburne High School’s Yellow Jacket Yapper, more plentiful than everything but bottle caps and wire coat hangers. The Shantels were one of those bands showcasing the talents of Dacus, Rodney Thomas, Jimmy Thetford and Galen Angle.

“We loved the loud guitar songs,” Dacus said. “The Kinks were as loud as you could get back then, punk rock in their day.”

“Oh yeah, played a lot of rhythm and blues, played on the east side of Cleburne and were embraced over there,” Dacus said. “We didn’t even know we were playing R&B and blues really yet, just knew it felt good.”

The dream was at hand, by local standards at least.

“Because you see my family was poor when I was a kid but then, learn to play the guitar, all the sudden people were paying attention to me, the girls started talking to me.

“The Cleburne Times-Review used to cover us when we’d play around, battle of the bands things at the armory, which is where the [Cleburne Conference Center] is now, store openings and stuff. Hollister’s Shoe Store downtown was our first paying gig I think. See all the kids with money had penny loafers with the pennies in them and everything and that was the big thing. I couldn’t afford those but that’s how we got paid, a pair of penny loafers. Man I thought I hit the big time.”

The Shantels gave way to the Shux, a band that included Dacus, Thomas, Thetford, Michael Dohoney and Allen “Buzzy” Hall.

The origin of that band’s name differs depending on who you ask.

One of the all-time great clips of music footage is Jimi Hendrix’s cover of The Troggs’ “Wild Thing” at the Monterey Pop Festival. Midway through his blitzkrieg mash up of guitar poetry and freak out, Hendrix seagues a few lines of Frank Sinatra’s then current “Strangers In The Night,” followed by an aside ad lib “Aw shucks.”

“By then Hendrix is the coolest thing in the world and so we took the shucks and changed the spelling,” Dacus said.

“Yeah, I guess that’s an association but we were already The Shux before Jimi claimed that phrase, but certainly we were big Jimi fans,” Dohoney said.

“I already loved Ray Charles and Elvis and dug the Beach Boys,” Dohoney said. “But when I saw the Beatles that first time ... ”

Dohoney, who joined his first band, The Chancellors, when he was 11, said he first saw the Shantels playing at Hulen Park near the tennis courts and liked what he saw.

Cleburne native Larry Barker said he remembers seeing Dacus play around town and was amazed by how good he was even back then.

Norman, who played in The Chancellors with Dohoney before moving on to Electric Honey, also praised Dacus.

“We were rivals maybe from being in different bands but I always admired his talent and what he did back then and later on.

Norman joked that he and other boys his age, many of whom also played in bands, were always getting harassed about the length of their hair at CHS.

“My dad wouldn’t let me grow my hair long,” Barker said. “But I guess I was still a hippie on the inside.”

Norman later played in the band Blackbird, which featured a young unknown guitarist then known as Steve Vaughn.

“Even then you could tell he was something special, didn’t sing yet, just played guitar then,” Norman said. “But yeah, I remember us playing on Sylvania in Fort Worth and the armory here in Cleburne. One time my mom cooked dinner for us before a show.”

The Shux meanwhile played throughout the Metroplex at times landing opening gigs for name bands such as the Animals and Buffalo Springfield when they passed through Fort Worth.

“My freshman year Cleburne won district and a bunch of us went to Temple on the train for the next game,” Barker said. “That was really cool cause we were just young and doing a bunch of crap on the train. But, I don’t remember if they were still the Shantels or The Shux yet, but they went and played on the train coming and going.”

Then it went sideways for various reasons, Dacus and Dohoney, both A students, getting the boot from CHS, long hair and all. Both finished their senior years elsewhere but around that time Dacus gathered The Shux, which by that time had become Santa Fe, together to inform them he was California bound.

“Oh we were shocked,” Dohoney said. “But you know 1969 was just a very tumultuous time not only nationally but locally too and try as we might we just couldn’t keep the band together. I never held it against [Dacus] though and was proud of him and him doing that inspired me to go to California later.”

Up, up and away

Dacus transitioned into another band, The Yellow Payges, for a time and then into, if never exactly name recognition on par with, say Jimmy Page, a nodding acquaintance at least with fame. Through session and live work Dacus met and played with numerous big names. Billy Joel’s “My Life,” that’s Dacus on background vocals. He also wrote and recorded with Stephen Stills, played with Elton John and Boz Skaggs and added guitar to John Lennon’s “Rock ‘n’ Roll” album.

“I met him and Harry Nilsson was there and Mick Jagger was there at some point with a bunch of chicks hanging off him,” Dacus said. “You get intimate recording in the studio but can’t say I really knew them or anything. I was never star struck though ’cause it was never about status for me, just about the music and everyone who plays music is in the music family.

“But there were moments. At one point I’m in some marble mansion in Beverly Hills, famous people everywhere thinking [expletive deleted] I’m from Cleburne, what’s happening?”

Dacus took up acting as well, most notably landing the role of Woof in the 1979 movie “Hair,” about which time he appeared on the cover of Circus magazine.

A friend suggested he should join the band. Dacus suggested the friend was crazy. Contacts were made, etcetera and Dacus got the call to audition for the band in Los Angeles. Being still involved in “Hair” and in New York, Dacus all the same bought a Chicago song book, brushed up on the band’s catalogue and headed west.

“They were sad obviously from the loss,” Dacus said. “The first song I tried with them was “Feeling Stronger Everyday” and they were just really down and had already auditioned 30 or 40 people, but eventually I got them to perk up.”

Dacus became a full member and performed on the band’s “Hot Streets” and “13” albums, writing and singing several tracks including the semi hit “Must Have Been Crazy.”

The dream didn’t last and the band unceremoniously dropped Dacus in 1980 for reasons never fully explained.

“I’ll just leave that alone,” Dacus said. “I became a scapegoat. I’ll put it that way.”

After that he changed his life, got married, still is, and in his words became invisible, though he never completely gave up music and has since played with former Chicago founding member Peter Cetera among others.

At this point Dacus said he still writes music and looks forward to playing more though he harbors little interest in current music. Whatever bad feeling arose during his days with Chicago appear to have faded in the years since, the future looks bright and it’s been a helluva ride, Dacus said.