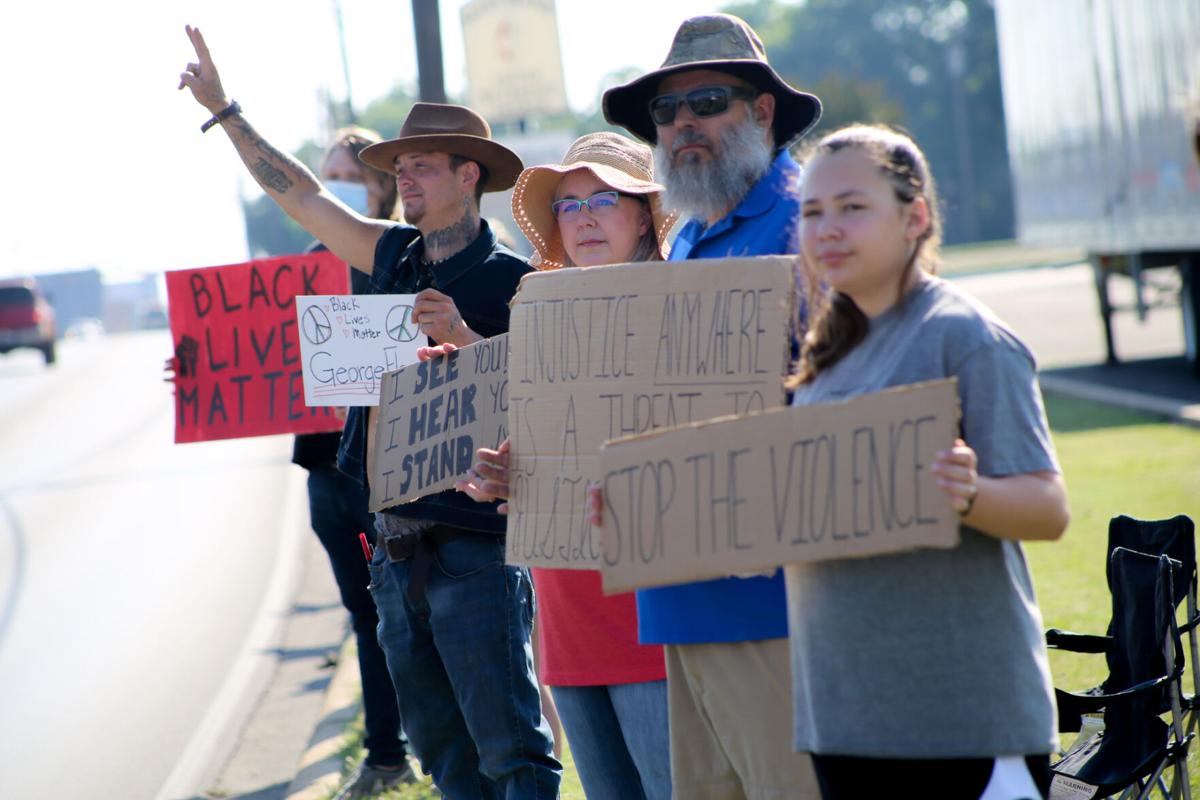 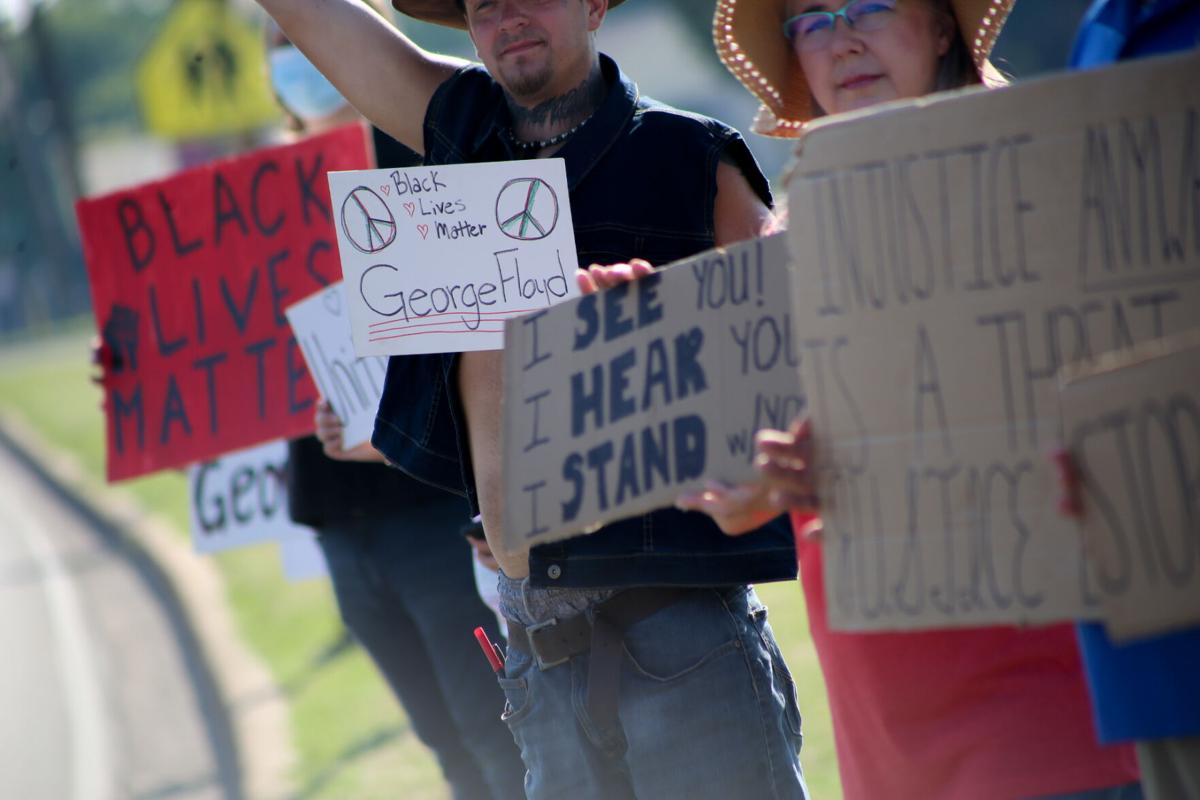 Cleburne protesters call for justice in the murder of Minneapolis resident George Floyd. 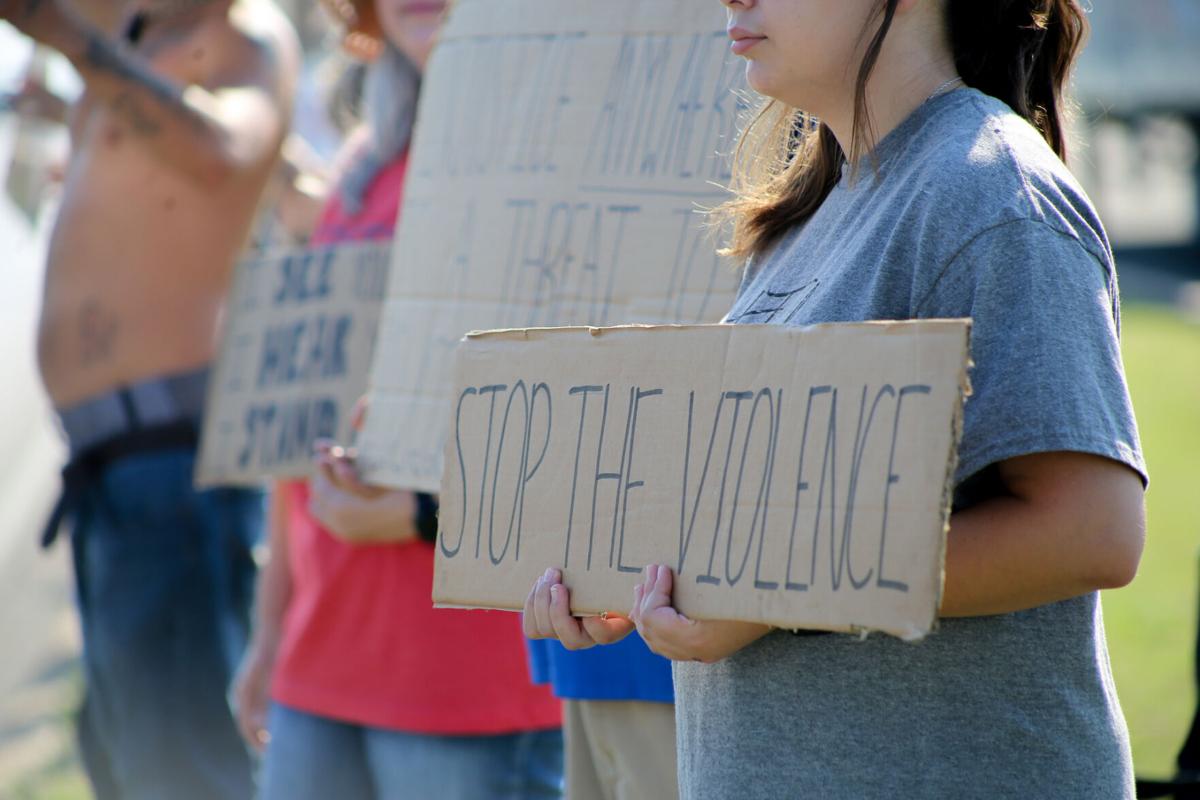 People came and went throughout the day Tuesday to protest the May 25 murder of George Floyd by Minneapolis police officer Derek Chauvin. The crowd in front of Yellow Jacket Stadium fluctuated growing to about 40 people at times. City officials called the protest peaceful and problem free. 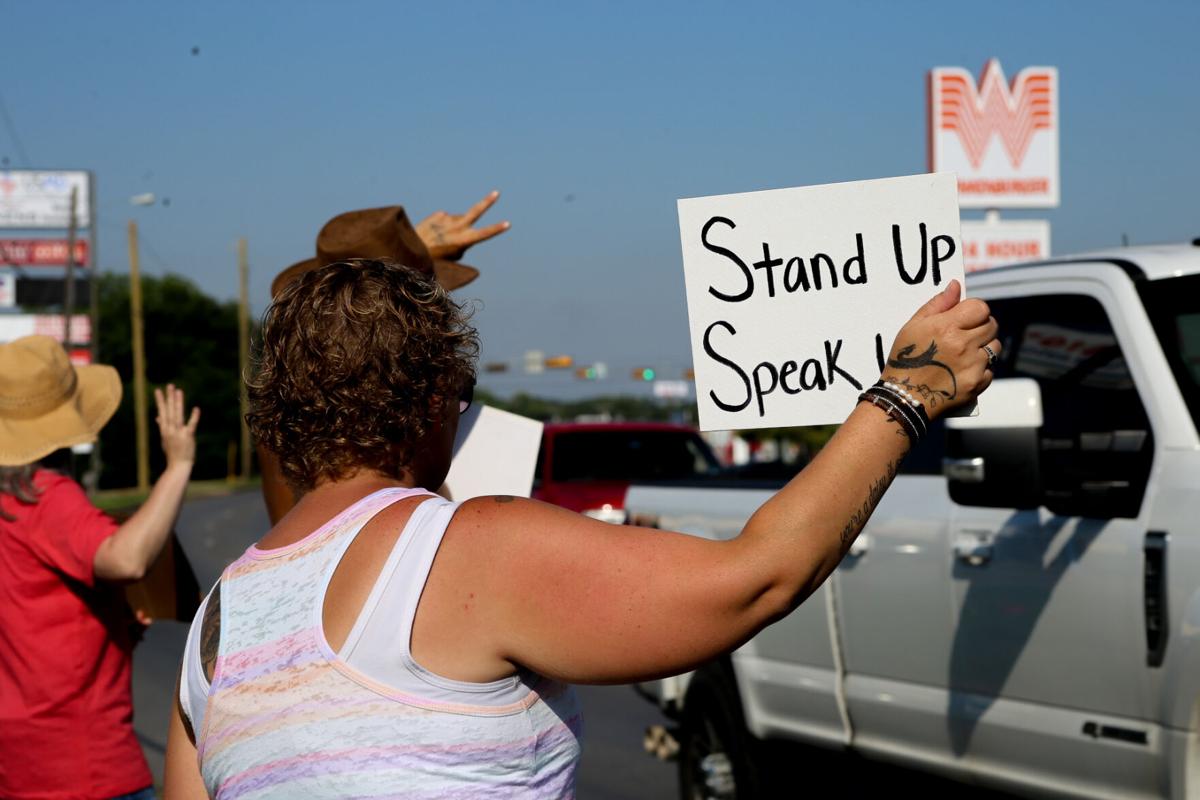 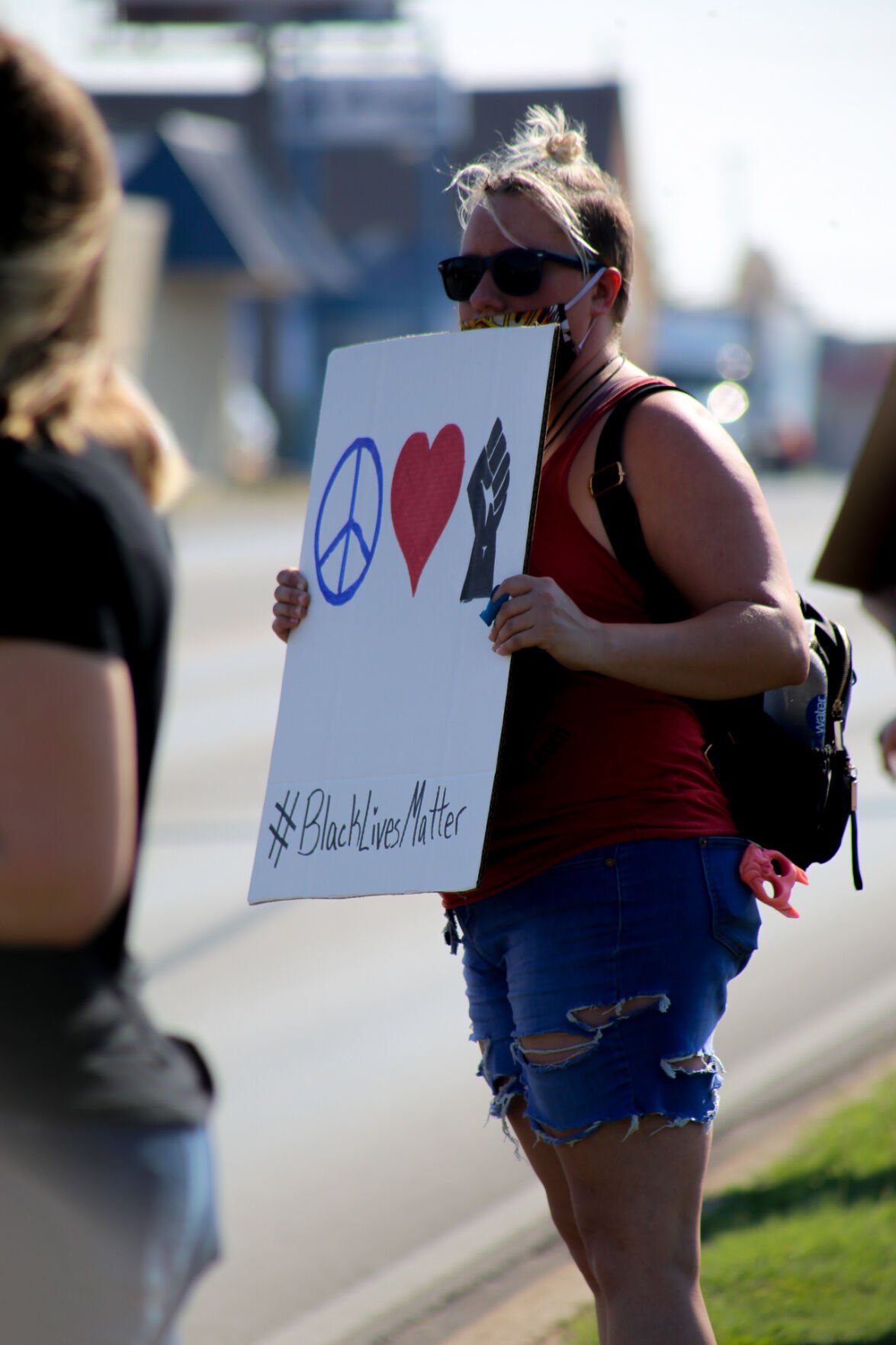 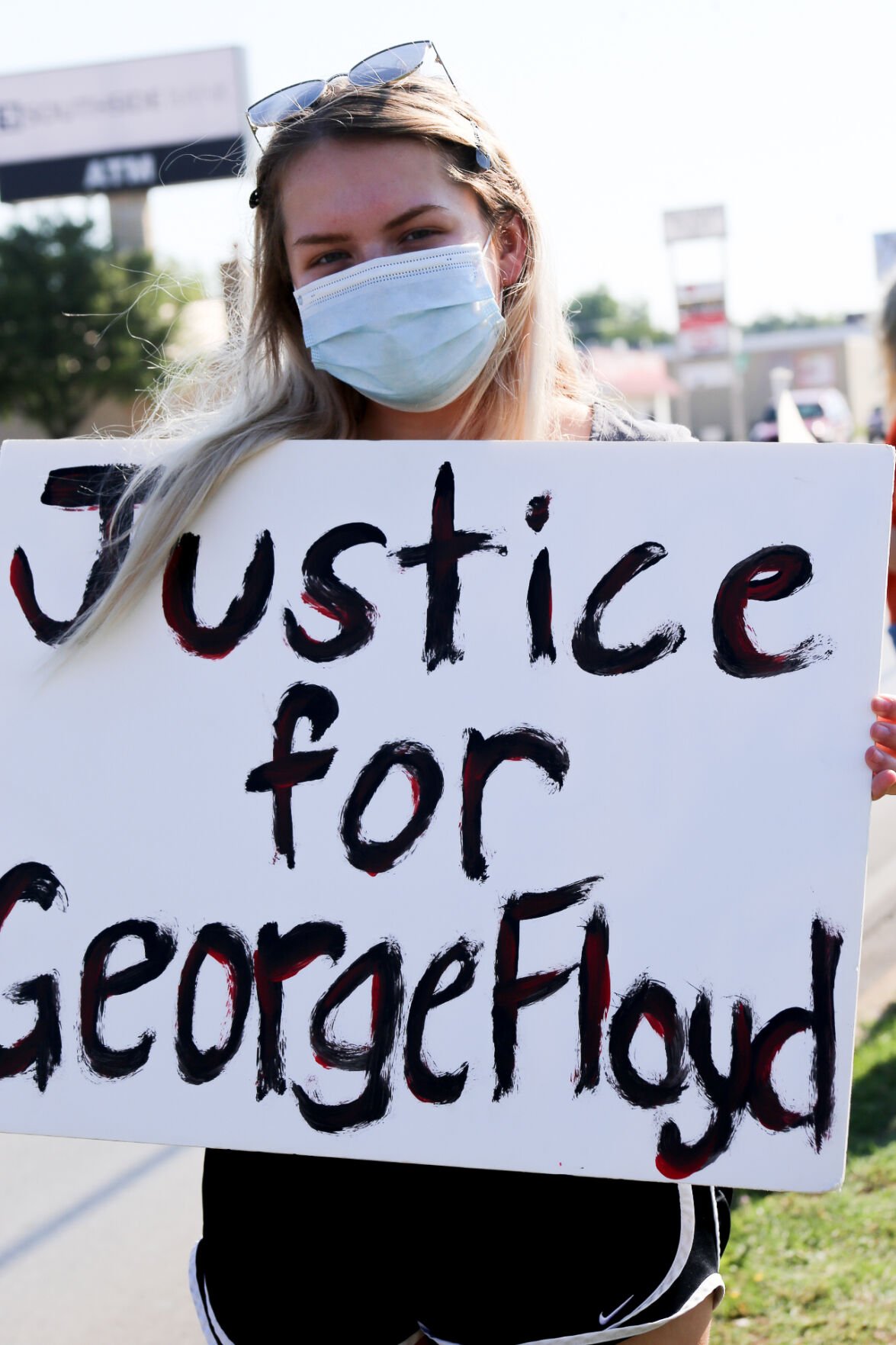 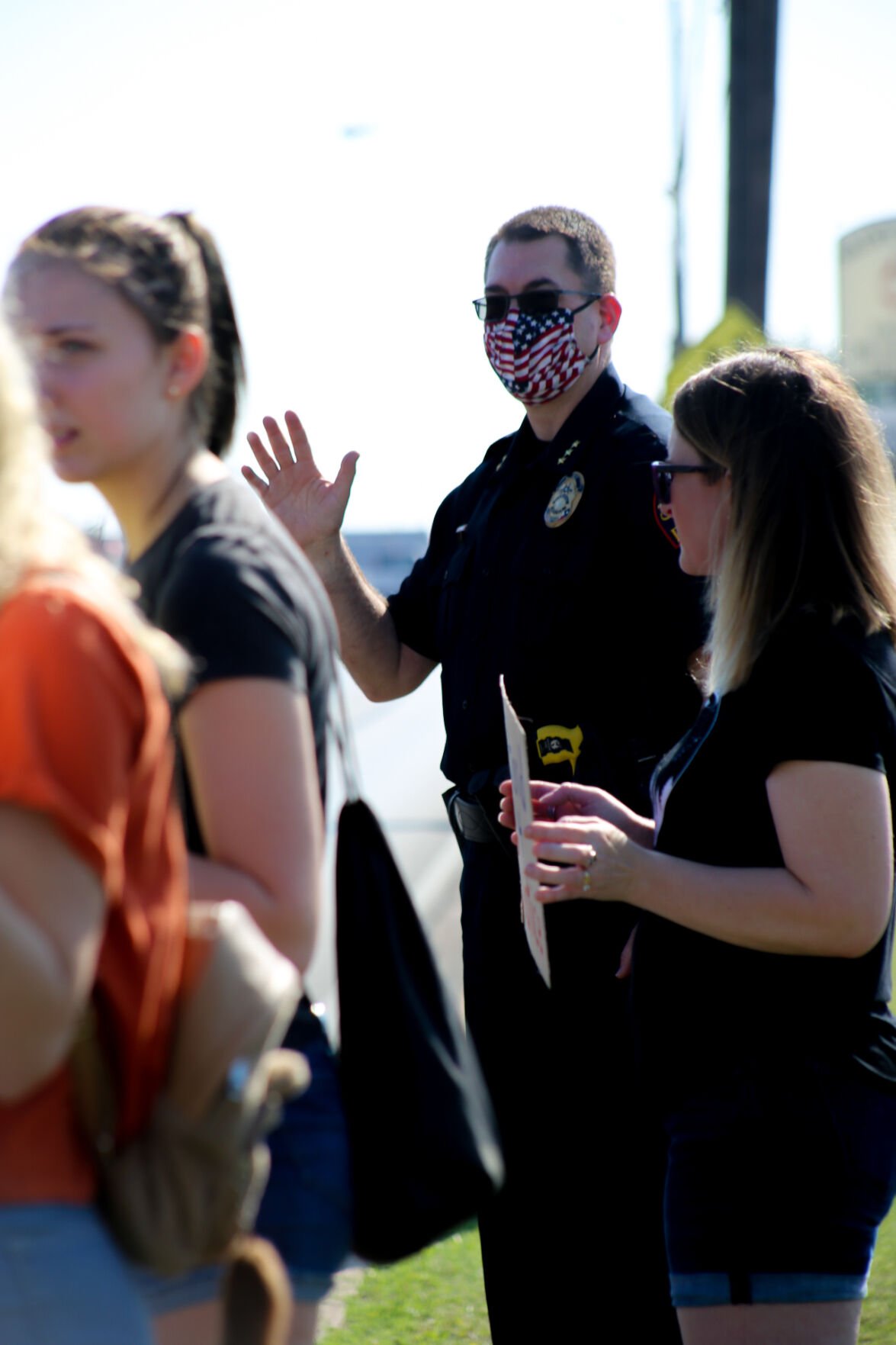 Cleburne protesters call for justice in the murder of Minneapolis resident George Floyd.

People came and went throughout the day Tuesday to protest the May 25 murder of George Floyd by Minneapolis police officer Derek Chauvin. The crowd in front of Yellow Jacket Stadium fluctuated growing to about 40 people at times. City officials called the protest peaceful and problem free.

Several Cleburne residents, as well as Cleburne Police Chief Rob Severance and Mayor Scott Cain, weighed in on the May 25 killing of George Floyd by Minneapolis police officer Derek Chauvin as well as the protests, and in many cases riots, that spread across America in the days subsequent. Two residents questioned Severance’s silence on the matter, charges Severance said were incorrect.

Cleburne resident Dexter Baldwin, in a May 27 tweet, thanked Severance for his “outstanding, multifaceted service to the city of Cleburne” and voiced appreciation for his service. Baldwin, in the same tweet, wrote that he scoured Severance’s social media platforms to see if he, “like many of your colleagues, denounced the murder of George Floyd.”

In a May 28 Facebook post, Baldwin listed several police chiefs throughout the country who have “publicly condemned the actions of the Minneapolis officer” and, in a separate Facebook post referencing Severance, wrote that silence speaks volumes and that “leadership is necessary to convey policy and direction.”

“Regrettably, I was unable to find any statement/record of your sentiment concerning Mr. Floyd,” Baldwin wrote in his May 27 tweet. “Why is this important. Why do we need to hear from you? You have officers that don’t understand the gravity of the situation and question the actions taken against officers involved.”

As to the last part of that sentence, Baldwin did not name but referred to a Facebook post by a Cleburne police officer.

The officer, in his post, notes that force always looks bad but questions whether Chauvin’s knee on Floyd’s neck actually caused any injury or Floyd’s death. In the same post the officer writes that it seems fast to have fired the four officers and questions what the other three did that was bad. The Cleburne officer concludes by writing that he’s interested in seeing the autopsy report.

Baldwin, in reply to the post, wrote “unbelievable.”  He followed that by posting a picture of Chauvin crouched with his knee pressed against Floyd’s neck while two other officers hold Floyd, who was handcuffed and on the ground, down and a fourth officer stands nearby. Dexter, referencing the picture, wrote, “Now what? What’s the next defense?”

Cleburne resident Carolyn Myres said she saw Baldwin’s posts and responded that she too would like to see Severance comment on the matter.

Severance responded and thanked Baldwin for reaching out.

“I don’t have all the facts about Mr. Floyd’s tragic death, so it would be irresponsible for me to speculate publicly about the situation,” Severance wrote in a post to Baldwin. “I can assure you that kneeling on a person’s neck is not something our agency condones. CPD is recognized (accredited) through the Texas Law Enforcement Best Practices Recognition Program and our policies and training far exceed state requirements.”

Severance in the same post linked an article in Police One, which Severance said he instructed his command staff and officers to read.

“The quick firing of the four officers, without a thorough identification and investigation of evidence, might have been warranted, but it might also prevent  the department from interviewing the officers to identify any gaps in policy, training and supervision that led up to the incident,” the article reads in part.

Baldwin thanked Severance for the reply and called the article cited insightful.

“So if any other officers happen to wonder what the additional three officers ‘did bad’ as [one Cleburne officer] wondered, it’s very clear in the article ... and on film,” Baldwin replied back to Severance.

“He referred to an article,” Myres said. “My thought was, ‘Is this it? Don’t you have a statement of your own?’

“He messaged back and asked if I’d seen the link to the article. I said I had. Then I talked to him and the things he said, I said, ‘That’s what the community needs to hear publicly. That would go a long way.’

“Because I’ve seen some wonderfully positive things such as statements from police chiefs and officers. Videos and pictures of officers marching alongside protesters and I want people to see that too. The more unity we show the more that goes a long, long way toward healing, compassion and understanding.”

Baldwin and Myres both expressed disappointment in the Cleburne officer’s post questioning whether Chauvin’s actions injured or killed Floyd.

“I saw it and it’s pretty obvious that that doesn’t reflect well on our police department,” Myres said. “We should expect better from them than that.”

Severance stressed that while he hesitates to comment on the actions of another law enforcement agency, he has questions concerning the firing of the four officers — Chauvin has since been charged with second-degree murder. The three other officers have been charged with aiding and abetting. He said he feels the need for thorough investigation.

“When events like this happen you have two parallel investigations, criminal and administrative,” Severance said. “The criminal is the charge of wrongdoing that goes through the court system. There the accused has the right, as all citizens do, to not testify against themselves. The administrative investigation is the bigger picture.

“It goes beyond personal culpability to determine any problems, weaknesses, things that need to be changed in the agency as a whole. In those investigations the actors do not have the right to plead the fifth. But if they’re terminated the agency may lose out on that ability to question them on the broader problems of the agency.

“So the question is, did [Minneapolis] lose out on the ability to question [the fired officers] on the administrative investigation? It goes to the speed of the process, which may sound like a technical question. But you need to be sensitive to those issues when looking at addressing the system as a whole.”

“Praying for everyone affected by Mr. Floyd’s tragic death,” Severance’s tweet reads. “Officers, did you see this Police One article?”

As to otherwise publicly commenting, Severance said that some police chiefs and officers have while others haven’t.

“I put out the message that I’m praying for all affected by his tragic death,” Severance said. “I try to avoid a rush to judgment on other jurisdictions when I don’t have all the facts. It’s rare for me to comment on other agencies and, at this time, my knowledge is limited to what’s in the media.

“Certainly I, and my department, support the right of people to peacefully protest. I’ll also add that I think the death of Mr. Floyd was tragic and that the video I saw of the incident was absolutely sickening. But it would be irresponsible of me to speculate what should happen in the justice system without all the facts of the case concerning the autopsy, the role of other responders at the scene and other factors.

“That’s not to say the video doesn’t look damning and that this is horrible on the heels of the pandemic and that there’s a lot of raw emotion out there right now. My heart absolutely goes out to everyone affected by this and I hope people don’t take my decision not to publicly speculate on the case as uncaring. I’m more than willing to visit and talk to anyone about it.”

As to the Cleburne officer’s post questioning the actions of Chauvin and the other three officers present that day, Severance said he hadn’t seen it. Severance said that, as investigators, officers are trained to ask the hard questions necessary to ensure thorough vetting of facts and evidence in putting together and presenting a solid case. Severance otherwise declined to discuss any actions to be taken in light of the post.

Severance, and Mayor Scott Cain, attended a Tuesday protest on West Henderson Street and spent time with the protesters who, throughout the day, fluctuated from about 10 to 40 people.

“Even though the tragic death of Mr. Floyd occurred in another part of the country, it affects and saddens people here in our community as well,” Severance said. “So I think it’s important that we stand with people in our community and let them know that their police department supports them and we’re here to protect and serve them.”

“I simply don’t have the words to describe what happened other than to say it was pure hatred and evil on display,” Cain wrote.

Cain called upon Cleburnites to call out hatred and racism, pray for Floyd’s family and community and to pray for the Cleburne community.

“My heart aches over the division our country is experiencing,” Cain wrote. “I long for unity for our nation, state and community.”

Given that several of the protests in the days since May 25 devolved into incidents of rioting, looting and violence on the parts of some involved, Baldwin said he hopes people remain focused on the original incident involving the death of Floyd and the larger picture of racial division and injustice.

Baldwin also weighed in on President Donald Trump’s tweets and comments on the events of the past nine days.

“I don’t want his improper and inflammatory rhetoric to take away from the main focus, which is the outrage most Americans have felt from the murder of George Floyd,” Baldwin said. “His comments about police brutality in past and current comments have not served to diffuse the violence and anger in our country. Rather they have inflamed the climate of violence and anger and are inappropriate for the leader of our country.”

“No area of this nation can brag about treatment of black people through history,” Warren said. “It’s situational ethics and willful stupidity. That’s never going to change until people sit down and discuss the history of this nation. We have to trust each other and recognize each other’s humanity. But the attitude of many in America is that they don’t want to understand that.”

“Amid the myriad of reasons for racism is the undue application of the rule of law,” Warren said. “For people who look like me, the right to equal treatment is eviscerated and categorically denied in which case the preponderance of evidence is most often based on personal discretion, and people who look like me are born guilty.”