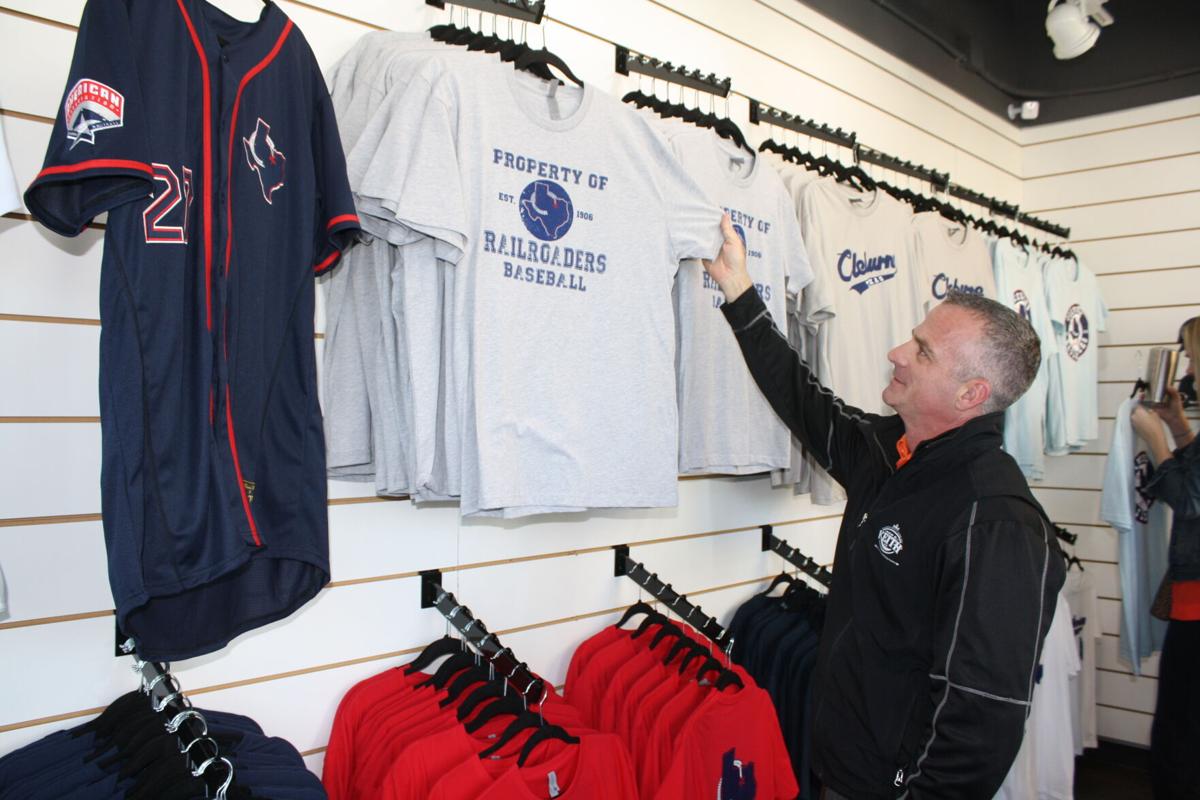 In addition to welcoming new partners into the ownership group, the Cleburne Railroaders on Wednesday also unveiled new logos, new uniforms and a new color scheme — along with a new mascot to join Spike and his antics — to better embrace the dynamics and history of the city of Cleburne and its railroading heritage.

The team’s official colors have been changed from orange and blue to a new set of colors inspired by the Texas flag: caboose red, steel rail blue and whistle post white.

The Railroaders also revealed a new set of logos, with an emphasis on showing the country and world where the city of Cleburne is geographically located via its logos.

“I think one of the more important things that we really wanted to accomplish with this was we wanted to literally and figuratively put Cleburne on the map,” said Alan Miller, a marketing specialist who founded COLLiDE Agency and is one of the Railroaders’ three new co-owners. “I think from a perception base outside of the area, it wasn’t overly clear where Cleburne was or if Cleburne was even in Texas from a league perspective and some other big things. One of the things that was very important to us was to make sure that we included location, we included Texas, and we wanted to use colors that had familiarity and history in the area.

“We brought a lot of pieces together. If you go through the web site and read the specific details, there’s a history and story and purpose behind every detail that went into them. From the specific lettering or numbers from the train cars to the actual script, which was designed after the Katy train, so there’s a lot of inspiration from around the area that we wanted to make sure it was part of the brand moving forward.”

The club revealed three primary team logos, headlined by the ‘C-Texas’ logo, which features a railroad track-shaped C wrapping around the panhandle of Texas leading to the location of Cleburne, which is marked with a star and railroad spike.

Other logos include what the ‘Roaders refer to as the ‘Katy-R,’ which includes the star and spike that harkens back to Cleburne’s location.

Another logo in the Railroaders’ primary set — which Miller considers to be the primary mark — is the ‘Cleburne Circle,’ featuring the ‘C-Texas’ in the middle of a baseball with narrow-gauge railroad tracks in place of baseball seams with ‘CLEBURNE’ and ‘RAILROADERS’ surrounding the outside of the emblem.

“We wanted to create an identity that honors the 115-year heritage of the team and the region,” Miller said. “Baseball and trains are the fabric of America. We couldn’t be more excited to build a Texas mecca for baseball fans.”

The new logos were created by Miller’s COLLiDE Agency and designer Kevin McLaughlin.

“Alan is really kind of a next-level marketing guy and he really looked at the history and studied the history [of Cleburne baseball],” Railroaders Owner/GM John Junker said. “The thing I like about his new branding is everything has meaning. Everything has meaning to the story. I look at it as the rebranding is adding to — adding to Spike and some of the cool things we’ve done in the past — and bringing that really great story and history on top of that.

“I love the fact that [the new logos are] all about Texas, all about Cleburne and all about having pride in our location. Everybody wants something from Texas and it really identifies where we are and also who we are. Alan has that next-level of thinking with what he’s done in the marketing world. I really trust what he’s doing and I really like the stories he told to put it all together.”

In addition to a new color scheme and new logos, the Railroaders also revealed a brand-new uniform set which features a traditional home set, a traditional away set and a third “heritage” set.

“... We’re actually big traditionalists with uniforms and jerseys,” Miller said. “We believe the best ones have a great story to tell. It was very important to us that when people see our home jersey, our away jersey, our heritage jersey, that the elements on it mean something and represent the people here and represent the entire territory that brings a lot of community pride.”

While designing new logos and uniforms usually can be an exhaustive and time-consuming process for professional sports franchises, Miller said they were able to develop a new look for Cleburne in a condensed timeline.

“We moved very fast; I would say we probably did it in the last three to four months or so,” Miller said. “We got it done in a very quick time. We’d love more time. I always say a brand is a living, breathing thing that changes over time.”

The Railroaders’ team store was busy moments after Wednesday’s press conference as merchandise with the club’s new gear was available for sale.

As part of the new identity, fans will see a new face alongside Spike as the club introduced Gandy, a new mascot to represent the club’s railroading heritage.

According to the Railroaders, Gandy was part of the Santa Fe railroad track maintenance gang from the old days. These track gangs were known as ‘Gandy Dancers,’ who sang songs while they were working. Gandy was sad when he lost his job to machines but he is now a happy guy, thanks to his newfound friend, Spike, who helped fix his broken railroad hammer. With all of the snarling baseball logos out there, Gandy brings the smile back to the ballpark.

The away uniform features a grey jersey, with a simple navy blue script on the front reading ‘Cleburne,’ with ‘Texas’ on its tail. The sleeves feature a Gandy patch on one side and the logo for the American Association on the other. The pants are grey with navy blue piping, and the belt and stirrups are also navy blue. Topping off the look will be a navy cap with the ‘C-Texas’ logo on the front.

The home uniform has a white jersey with the new ‘Railroaders’ script on the front that features “Cleburne, TX” on its navy blue tail. Note that the number font on both home and away jerseys is the same one used on the old Santa Fe steam locomotive tenders. Gandy and the American Association patches grace the sleeves. The pants are white with dark red and navy piping and also feature dark red numbers on the front, an homage to the team the original Railroaders would eventually become: the Houston Astros. Navy stirrups with three dark red stripes and a blue hat with the ‘Katy R’ complete the look.

Finally, there’s the Heritage uniform starting with a navy blue top featuring red piping and the ‘C-Texas’ logo on the left breast. Sharp, three-color McAuliffe font numbers are on the front and back with Gandy and AA on the sleeves. The pants are grey with a dark red stripe and belt, the stirrups mimicking the ones worn by the first Railroaders team back in 1906. A navy hat with the three-colored “Katy R” is worn with this uniform.

The Railroaders also said they will have a rousing schedule of special days and special edition uniforms to keep the fun going on all season long at The Depot in 2021.

Christopher "Chris" McCleary, 61, of Rio Vista passed away April 15, 2021 in Fort Worth. Service will be at a later date.