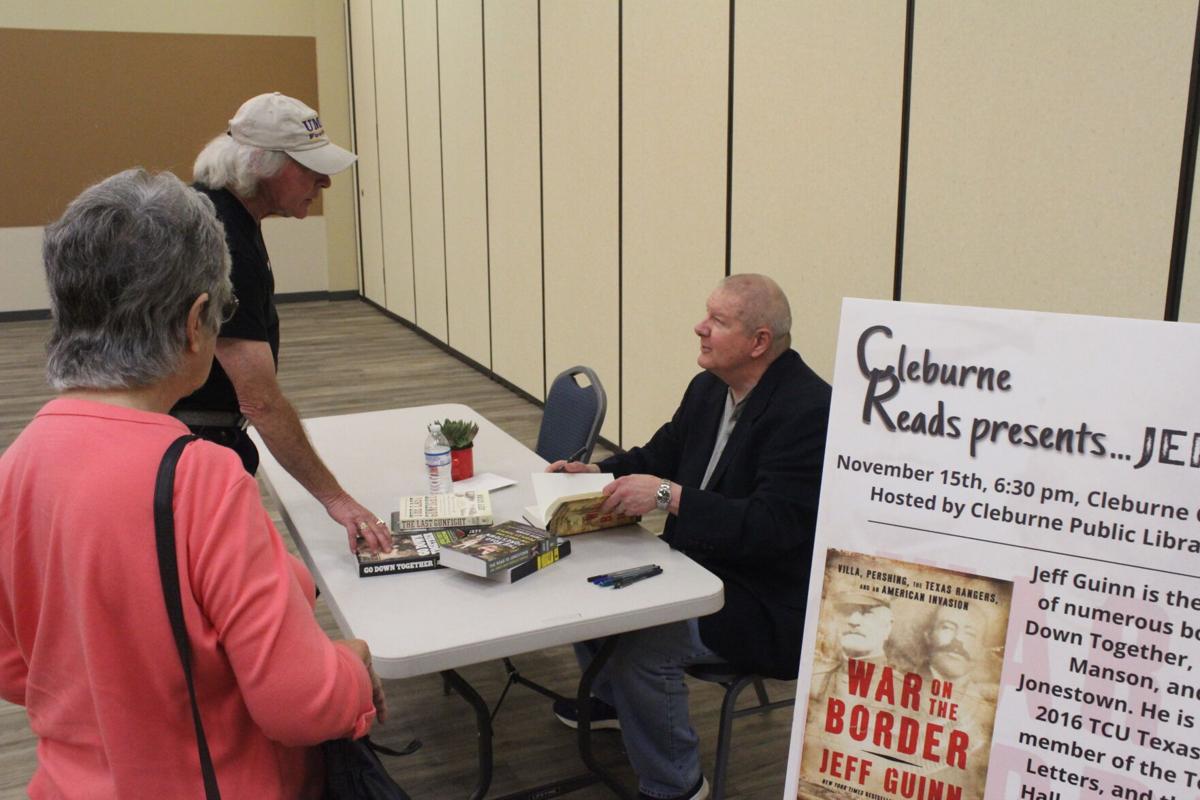 Author Jeff Guinn signs copies of “War on the Border” and his other books during Monday’s Cleburne Public Library event at the Cleburne Conference Center. 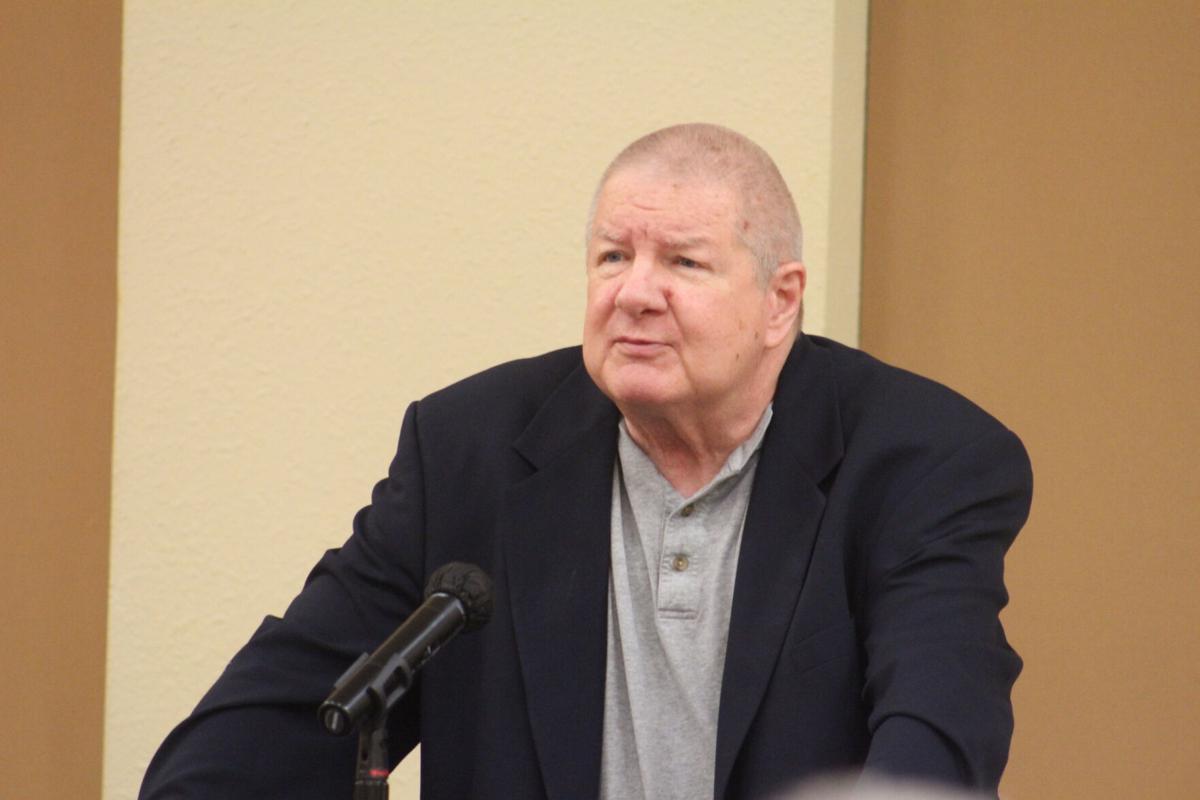 Author Jeff Guinn signs copies of “War on the Border” and his other books during Monday’s Cleburne Public Library event at the Cleburne Conference Center.

Writing nonfiction, author Jeff Guinn said, demands adherence to truth no matter how uncomfortable that may at times be.

“My job as a writer is to find the facts separated from mythology and put those facts in my books then let the readers make up their own minds,” Guinn said.

A practice, unfortunately, less common in the current world of nonfiction, Guinn added.

A trend, Guinn said, that spans the board rather than being relegated to liberal, conservative or any other particular philosophy.

Guinn, a former Star-Telegram books editor and the author of 25 fiction and, mostly, nonfiction books, discussed writing in general and his books in particular Monday night at the Cleburne Conference Center.

A grant from the U.S. Institute of Museum and Library Services made Guinn’s appearance — part of the Cleburne Public Library’s Cleburne Reads series — possible.

Some of his books scaled the New York Times bestseller list while others sold in the low dozens, Guinn said.

“Which made it obvious that my next bestselling book would be about Charles Manson,” Guinn joked.

Guinn’s publisher was “cautiously optimistic,” the book debuted at No. 12 on the New York Times bestseller list and Simon & Schuster dispatched Guinn on a speaking tour complete with limos and penthouse hotel accommodations.

“I’m in the limo, going over the Golden Gate Bridge,” Guinn said. “I’m thinking this is it. This is my life from now on.”

Reality crashed in in the form of a frantic San Francisco bookstore manager racing to the limo to inform Guinn that, despite much promotion, no one bothered to show for Guinn’s scheduled talk that night.

“That’s when I realized I may have been a little premature in my opinion of my importance,” Guinn said.

Facing the humiliation of speaking to the 250 empty seats in the bookstore’s auditorium, Guinn decided to call it a night. Until, that is, a C-Span camera crew showed up to film the night’s event. All involved hastily sought audience members so that the show could go on.

“The bookstore owner found a couple of people in the coffee shop,” Guinn said. “There was a corner out front where the homeless congregated. The limo driver called his mother.”

“One lady sitting in front was really interested in something stuck in her back tooth,” Guinn said. “On the back row some homeless guy stood up to ask, ‘Why don’t you tell everybody the truth, that Charlie Manson was a spy for the CIA?’

“Back in Fort Worth, my wife was watching all this on TV falling out of her chair laughing. I tried to get into the limo as fast as I could.”

As if he needed another lesson in humility, Guinn said the limo driver asked how he could get his book published. Guinn told him that it’s hard.

“Well gee, can’t be that hard,” the limo driver told Guinn. “They published you and nobody cares about your book.”

When it comes to deciding what to write about, Guinn said he picks historical events he “doesn’t know very much about” and events that continue to resonate.

“I study, learn everything I can then write a book,” Guinn said. “I never go into a book thinking I know what it’s all about. In this mix I started a book about the U.S./Mexican border. Nobody has any strong opinions about that.”

Guinn spent 18 months tracking down information and stories on both sides of the border including several uncomfortable truths. Among those are America cheating Mexico on the Gadsden Purchase and atrocities committed by the Texas Rangers. Truths that prompted one cable news outlet Guinn declined to name to bar him from the network even though they had interviewed him for several of his earlier books.

“I love this country and our government,” Guinn said. “But how can I write about the history of the border without writing about those incidents?

“Our successes as a nation are great. I think we should all take pride. But sometimes it’s important to learn from our mistakes. Let’s be brave enough to face history and if sometimes we come up a little short, let’s try to do better. There’s so much for all of us to learn. Let’s take it upon us to try to see outside ourselves.”

Guinn added that his book also includes instances great kindness by Americans to Mexicans and that he has written of the Texas Rangers “in a very laudatory way” in his books on Bonnie and Clyde and the O.K. Corral.

His in-the-works book involves the Rangers too, Guinn said, including a former Texas Ranger living in Cleburne. That book will cover religious freedom and the 1993 Waco siege.

Guinn fielded several questions including one about the Beach Boys/Manson connection.

Guinn concluded by pointing out that his now-grown children’s school librarian was in the audience.

“They love reading because of this lady,” Guinn said. “We’ve got to celebrate our librarians.”