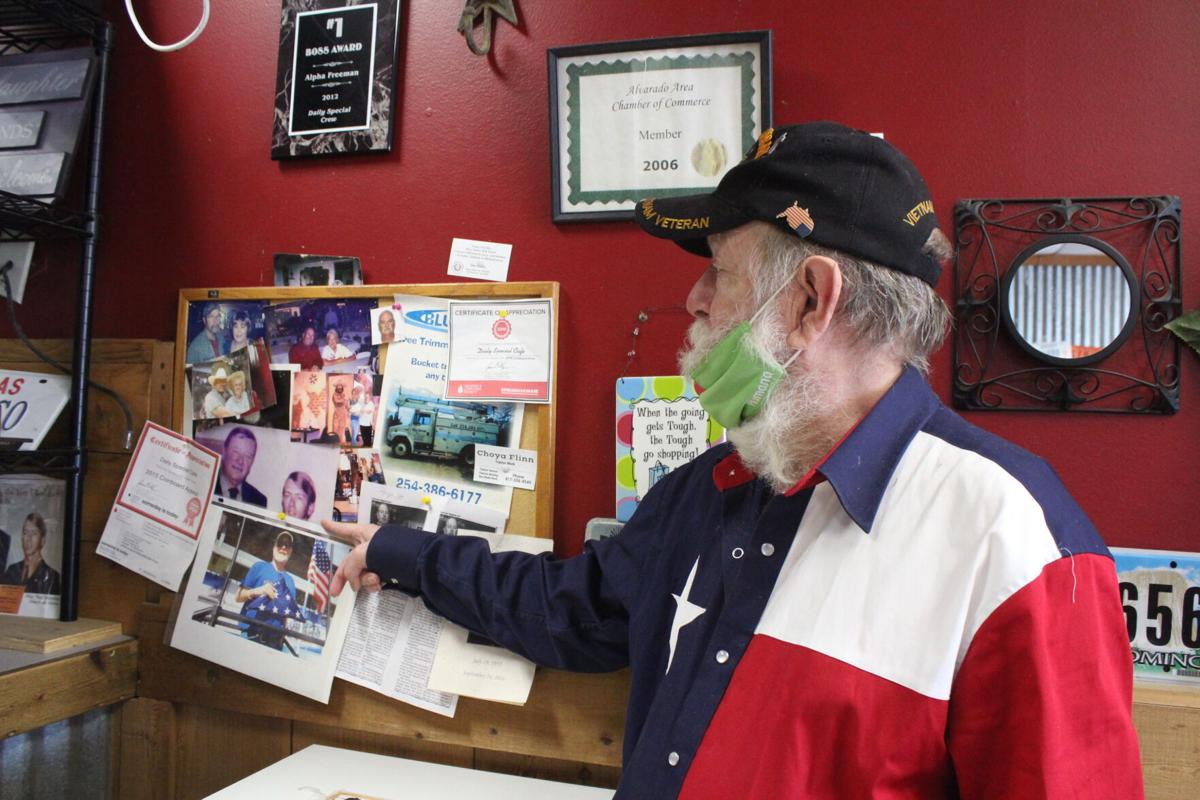 Alvarado resident Ray Murphey points out his picture in Alvarado’s Daily Special Cafe. Murphey often sets up in front of the restaurant to collect donations for homeless veterans and cancer research. 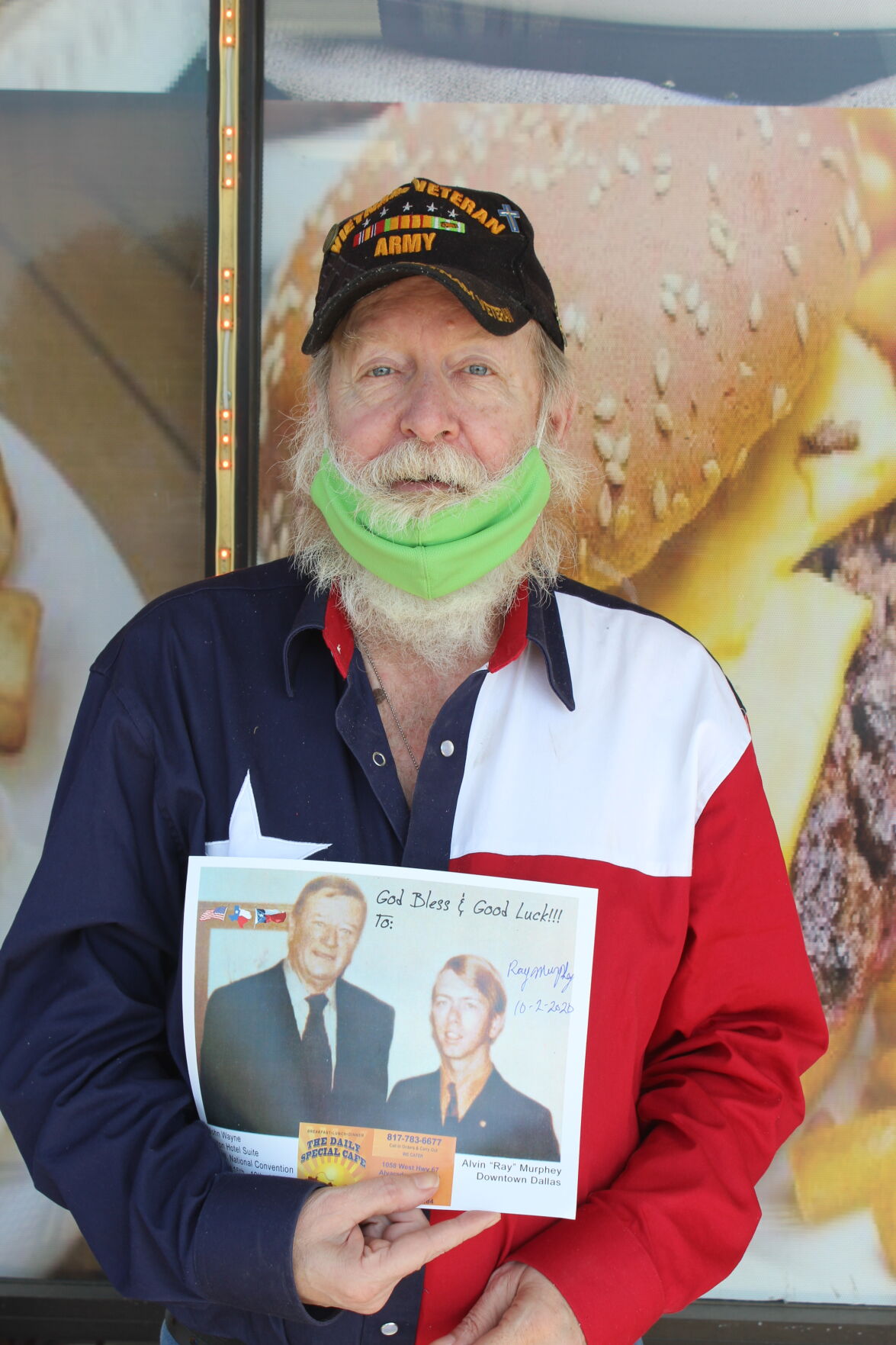 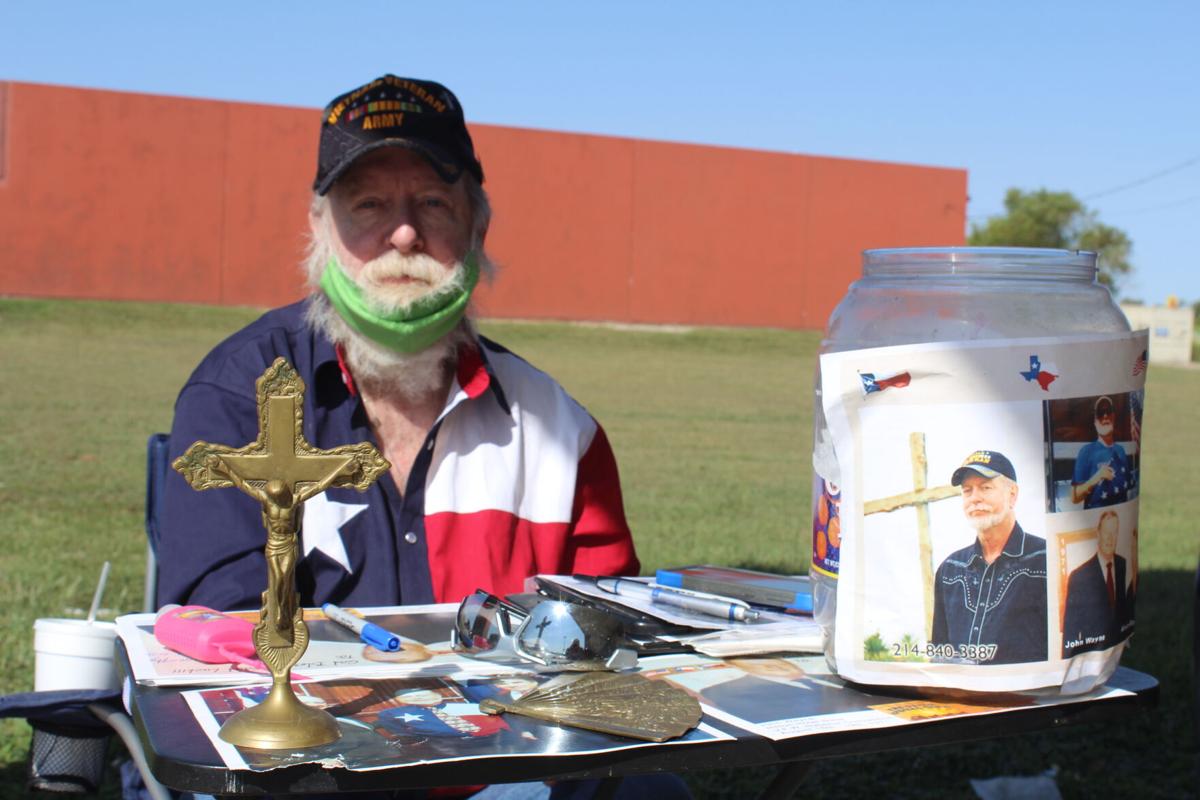 Ray Murphey solicits donations for veterans and cancer research in front of the Daily Special Cafe in Alvarado. Murphey founded the Ray Murphey Cancer Foundation in honor of his father, a World War II veteran who died of prostrate cancer.

Alvarado resident Ray Murphey points out his picture in Alvarado’s Daily Special Cafe. Murphey often sets up in front of the restaurant to collect donations for homeless veterans and cancer research.

Ray Murphey solicits donations for veterans and cancer research in front of the Daily Special Cafe in Alvarado. Murphey founded the Ray Murphey Cancer Foundation in honor of his father, a World War II veteran who died of prostrate cancer.

“Oh yeah,” Alvarado resident Ray Murphey replied without skipping a beat when asked if the girl was good looking.

Murphey, 69, should know, having apparently spent more than his fair share of time with the fairer sex.

“Been married five times,” Murphey said. “No, not still married. Well, legally I am. She won’t give me a divorce.”

Long before all that, the aforementioned girl, whose name Murphey never caught, missed her shot at free grub, if nothing else, not to mention the chance to meet one of Hollywood’s biggest stars.

“I walked up to the girl and said, ‘Do you want to have lunch with me and John Wayne?’” Murphey said. “She said, ‘John Wayne who?’ I said, ‘The Duke.’ And, about the time I got on the elevator, turned around and looked back at her, everybody around her was talking about John Wayne. And she dropped her jaw, and I said, ‘Bye.’ Cause that’s where I was going, up to the Zodiac Room at Neiman Marcus to have lunch with [Wayne].”

“I served my time in the Army and applied for a job at the VFW in Irving,” Murphey said.

Wayne, not long after, flew in to attend and receive an award at a VFW convention in downtown Dallas.

“Some of the guys [at the VFW] were talking about needing a volunteer to drive John Wayne around while he was in Texas,” Murphey said. “Well, he was my idol so I said I’d do it. Got to spend four days with him.”

“We went to Cattlemen’s Steak House in the Stockyards,” Murphey said. “Went to a Cowboys game and after that I got to babysit Ethan, his youngest son, who actually played his grandson in ‘Big Jake.’ I babysat him because John went to have drinks with Clint Murchison, the owner of the Cowboys.”

Murphey even experienced a slight whiff of fame by association.

“We went back to Fort Worth the next day,” Murphey said. “John had to meet some guy about a movie project. I went around to the pool room to hang out and wait for him to have his meeting. And this guy comes from the very back of the swimming pool, all the way out, and says, ‘Can I touch you?’ He said, ‘This is the closest I’ll ever get to that man in there.’

“That kind of freaked me out you know. But anyway, that was four days of just a dream come true you know.”

Murphey nowadays distributes and autographs copies of a picture taken of himself and Wayne in 1971, The Duke towering over the 20-year-old Murphey.

Murphey, who grew up in Oak Cliff, had already rubbed shoulders with at least one infamous character by that time.

“I was in seventh grade when [President John F.] Kennedy got shot,” Murphey said. “I remember watching all that on TV and then, a few days later, watching when [Dallas nightclub owner Jack] Ruby walked up and shot Lee Harvey Oswald. Of course, Ruby, when I was growing up, used to come to my dad’s house and party and my dad used to go to his club and party. Can’t say I knew him really. I was way young, but he associated with my dad and came by from time to time.”

Murphey’s father served, no doubt influencing his son’s decision to do the same years later.

“He was in World War II but never went overseas,” Murphey said. “He was in the Army too. We both wound up cooking at the same mess hall in Oakland, California.”

“The sad part is, the ‘Green Berets’ movie is what made me want to go to Vietnam,” Murphey said.

Being in the service, Murphey joked, placed him in an interesting position vis-a-vis the decade’s biggest band.

“I saw them on Ed Sullivan of course and kind of followed them a little bit,” Murphey said of the Beatles. “Course, being in the service, I was a Beatles fan but I wasn’t their fan if that makes sense. Because they got to have long hair and I didn’t.”

Music, nonetheless, played a large role in Murphey’s post-Army life and continues to do so.

“The older guys at the VFW wanted to start getting bands in there to get the younger veterans to come to the VFW,” Murphey said. “So I started doing that and the next thing I know I’m booking and managing bands all over Dallas and Fort Worth. Just local bands. Only one person that I know out of that bunch ever made it really big.”

That encounter happened in the early ’70s.

“A kid walked up to me at a club I was managing one day and asked if he could sit in with the band,” Murphey said. “I told him it’s up to them, not me. But he went and they let him sit in and, of course, the guy that let him sit in is still teaching guitar lessons in Oak Cliff today.”

The kid, by the way, was Stevie Ray Vaughan.

Sensing the demand for live bands was declining but the desire to fill the dance floor remained, Murphey transitioned to deejaying in the mid 70s. Billboard write ups and accolades followed with Murphey at one time rated the No. 1 country and No. 8 disco deejay in the state.

Such gigs took Murphey from Houston to Kansas to Iowa and beyond.

Deejaying also resulted in Murphey meeting another of his idols.

“I was working as a deejay in a little DFW hotel when Mickey Mantle came in and was having a drink,” Murphey said. “It was amazing to me to meet somebody like that although I’d already met John Wayne. But Mantle, you know, the Yankees were the team I cheered for growing up cause we didn’t have the Rangers back then.

“Another time I went to have lunch with my wife I was married to back then at Reserve Life Insurance in downtown Dallas. Then here comes Mantle getting on the elevator. We got to talking and I found out he was one of the owners of the company. So I got to know him a little bit, just brief encounters really though.”

While scanning through two scrapbooks of pictures and articles, Murphey mentions that he’s penning his life story and hopes to see it published soon.

Two constants run through Murphey’s life. Faith is one.

“Always have it with me,” Murphey said of a crucifix on a table Murphey recently set up to collect donations. “I have two crosses I always wear too. This one I got at Choctaw Casino in Oklahoma.”

Supporting the troops is the other.

That’s included everything from welcoming troops back home at the airport to organizing fundraisers for veterans.

A recent Friday found Murphey set up on the sidewalk in front of the Daily Special Cafe in Alvarado — Murphey’s picture hangs inside the restaurant — collecting donations for homeless veterans and cancer research.

“I started the Ray Murphey Cancer Foundation four years ago,” Murphey said. “My dad died of prostrate cancer and I’ve also always been a supporter and raised money for the John Wayne Cancer Foundation.”

“No, never met him again,” Murphey said. “I wrote him a letter, don’t know if he ever received it or not. One of the things he said to me on the way to Fort Worth was what I wanted to do when I got older.

“But, my stupidity and pride at the time I just figured if I couldn’t pay my own way I wasn’t going to go. Oh well, I’ve had a pretty good life.”