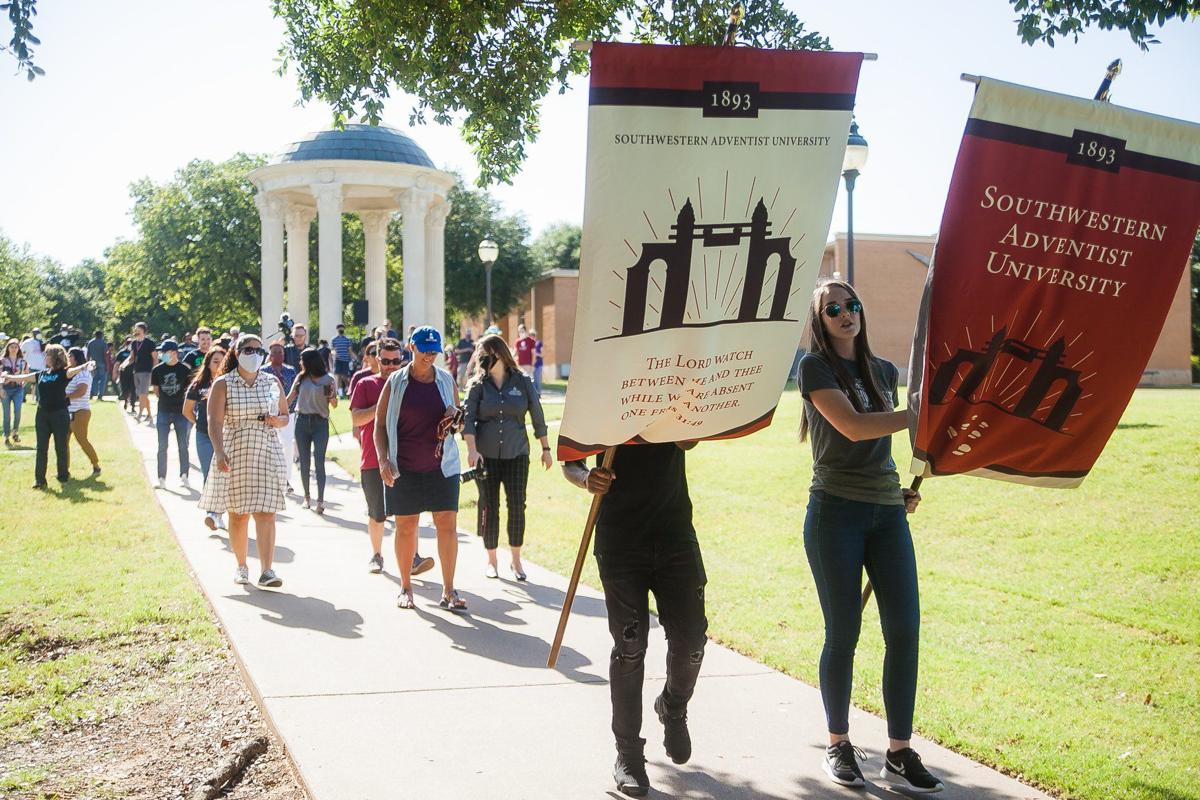 Over 100 people participated in Southwestern Adventist University’s “March of Solidarity: Celebration of Diversity” on May 29. Eight stops at landmarks around campus were visited during the one and a half mile walk. 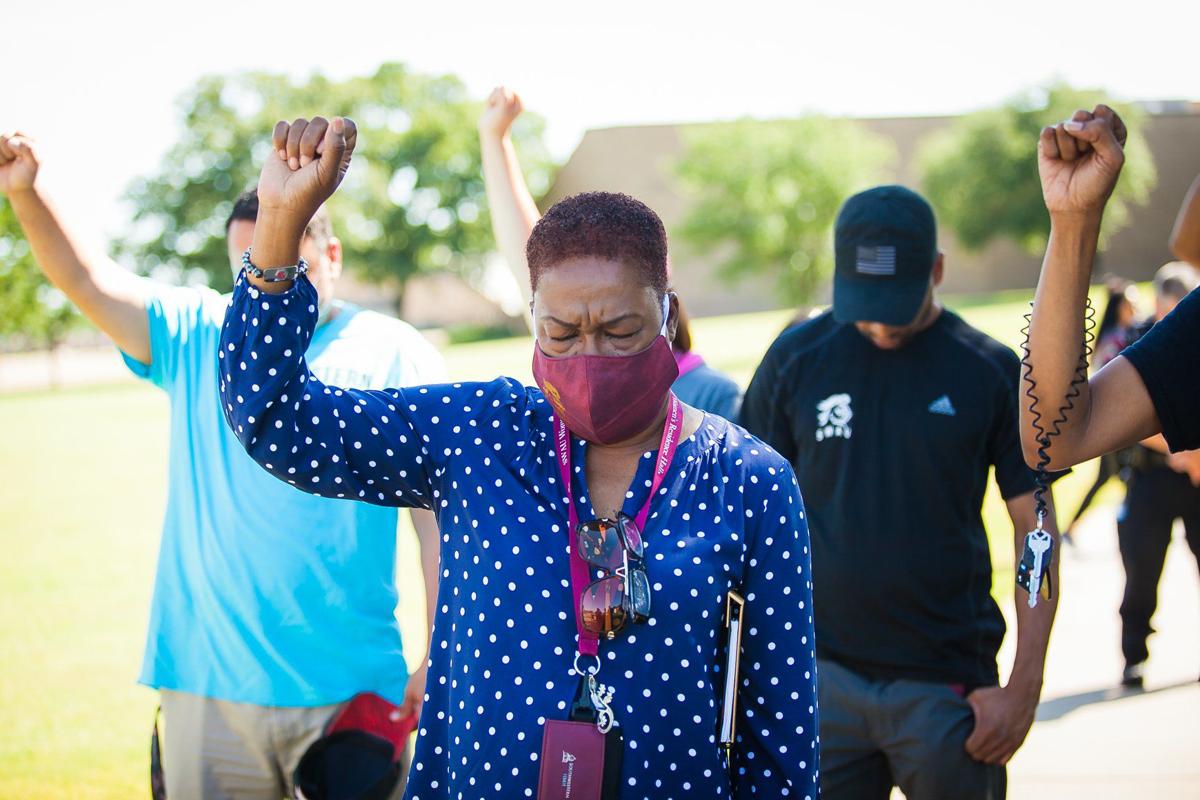 Participants of the march raise their fists in honor of lives effected by racial injustice.

Over 100 people participated in Southwestern Adventist University’s “March of Solidarity: Celebration of Diversity” on May 29. Eight stops at landmarks around campus were visited during the one and a half mile walk.

Participants of the march raise their fists in honor of lives effected by racial injustice.

The Texas heat didn’t keep over 100 people from walking one and a half miles in a march in solidarity.

Southwestern Adventist University on May 29 hosted the “March in Solidarity: Celebration of Diversity,” inviting all to celebrate the diversity on their campus.

“One of the values we have at Southwestern Adventist University is that we value the image of God in all humanity,” President Ken Shaw said. “As a result we treat each individual with respect and seek opportunities to work together for good of all humanity. One of the reasons we’re marching today is to celebrate the diversity that we have on this campus. We are a minority-serving institution. We see that every student is a child of God and we love them all. As we have experienced the terrible racial injustices over the past several months brings us to the second reason that we’re marching today.

The march, which began at the historical Mizpah Gate, included eight stops at different landmarks on the campus. Each stop featured a different speaker and students and recent graduates conducting prayers.

Two common threads were evident throughout all the speeches: it is time for a change and it is time to speak up.

“Martin Luther King says our lives begin to end the day we become silent about things that really matter,” he said. “I’m so glad here on this campus, at this beacon of learning that we have decided not to be silent about things that matter. It matters that a man can have his knee on another man’s neck while the other man cries out, ‘I can’t breathe’ and then calls for his mama.

“It matters that a 75-year-old white man marching peacefully can be pushed to the ground and police will walk past and no one will assist him and now he’s in the hospital with brain trauma. It matters that a man can run away and be shot several times in the back. It matters that all men are not looked upon as people.

“It matters that even in some segments of our church there is segregation still. It matters when we do not accept God’s calling upon our life to speak truth to injustice. The moment we become silent when it comes to the matters that are important is the moment we begin to die.”

Texas Conference of Seventh-day Adventists President Carlos Craig took the microphone at the rotunda, which was circled with battery-operated tea lights for participants to pick up and march with.

“It’s really hard to speak from a heart that’s broken,” Hunt said. “A 25-year career where you try to treat people with respect, compassion and dignity and you see the events that occur to George Floyd and it’s disgusting to a good cop. I need to speak on it now being the time.

“We’re in front of the clock indicating that it’s time for a change. Now’s the time for good cops to step forward and take action and not stand by silently as three others who — didn’t even know what they were thinking — did when George Floyd was being murdered. It’s past time to do this. The time for bad cops has passed.

“They need to get out, step back, go find another job, stop breaking the trust, stop embarrassing me personally and every other good cop who’s out there spending countless hours a day, millions of contacts a day nationwide to try to build trust to see it all washed away in one wave. It hurts us. Good cops are hurting.”

Hunt said that as chief it is his job to treat his officers with respect, dignity, compassion and empathy, so that they reflect those traits in how they act in the community and how they treat people.

“The respect and dignity and compassion that they get treated with, they will treat others with,” he said.

After Hunt’s speech, SWAU Assistant Dean of Women/Counselor Ann Jobity spoke about the cafeteria, where students of all nationalities gather while school is in session.

The electronic sign in front of the university broadcast a flashing message of unity. In front of it, SWAU Vice President James The spoke about “Love is our Sign.”

The message of love continued at Barron Chapel, where SWAU Assistant Professor of Religion Buster Swoopes spoke on “A New Commandment” next to the 10 Commandments statue.

“We’re not neighbors just because of proximity, even though right now we are physically distant we are socially closer than we have ever been before because the Holy Spirit has been poured out and called us to stand together, to march together because we are all neighbors.

“That means that whatever happens in Minneapolis, Minnesota, happens here in Keene, Texas, because George Floyd is my neighbor. Because the cop that spoke today and called for good cops to stand up and for bad cops to be called out, he is my neighbor. We are each other’s neighbors.”

Laughlin detailed the history of a building that carries the artwork of three angels on it.

SWAU Athletic Director and Mens Basketball Coach Tyler Wooldridge read Revelations 14:6, “And I saw another angel flying through the sky, carrying the eternal Good News to proclaim to the people who belong to this world — to every nation, tribe, language, and people.”

“An everlasting and eternal gospel,” Laughlin said. “And who is it for? Every nation, every tongue, every tribe, every people. We have a responsibility to share the very good news that a Jewish man lived and died because he came down from heaven to be our Messiah. The Messiah for every single being on this Earth. We have a calling my friends, to stand together to tell the good news to this world. That’s what Southwestern Adventist University exists.”

The march wrapped up where it began, the Mizpah Gate, which was officially dedicated as a national Texas monument in 2009.

“The new normal is that there will be an intolerance to social injustice, to any man, woman, boy or girl of any group, of any culture,” Griffith said. “Our coming together proclaims that we will no longer abide by the cruelties that we see inflicted on any group of people. We’ve got to come together and understand that we are all one people, that we all come from the same God. Jesus Christ died for all of mankind. He gave his life that we may have a chance for eternal life. He places a tremendous value on every individual, man, woman or child, regardless of race or creed.