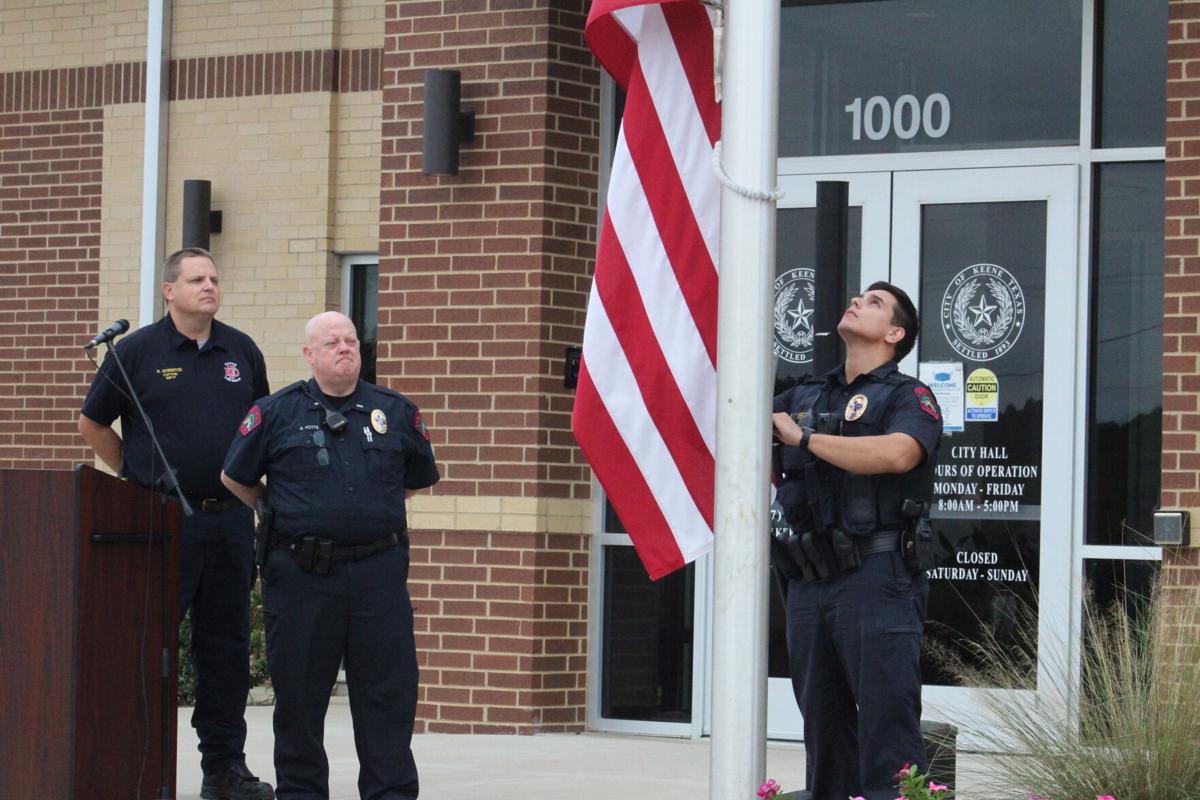 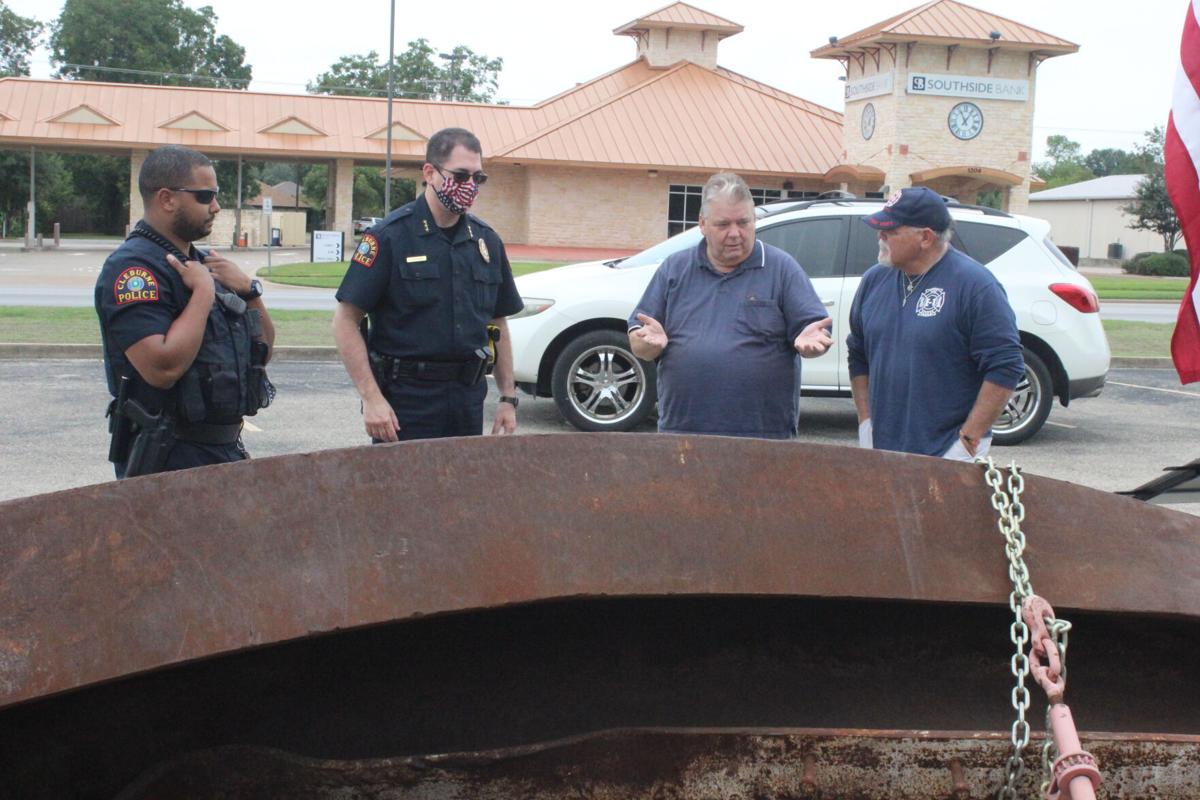 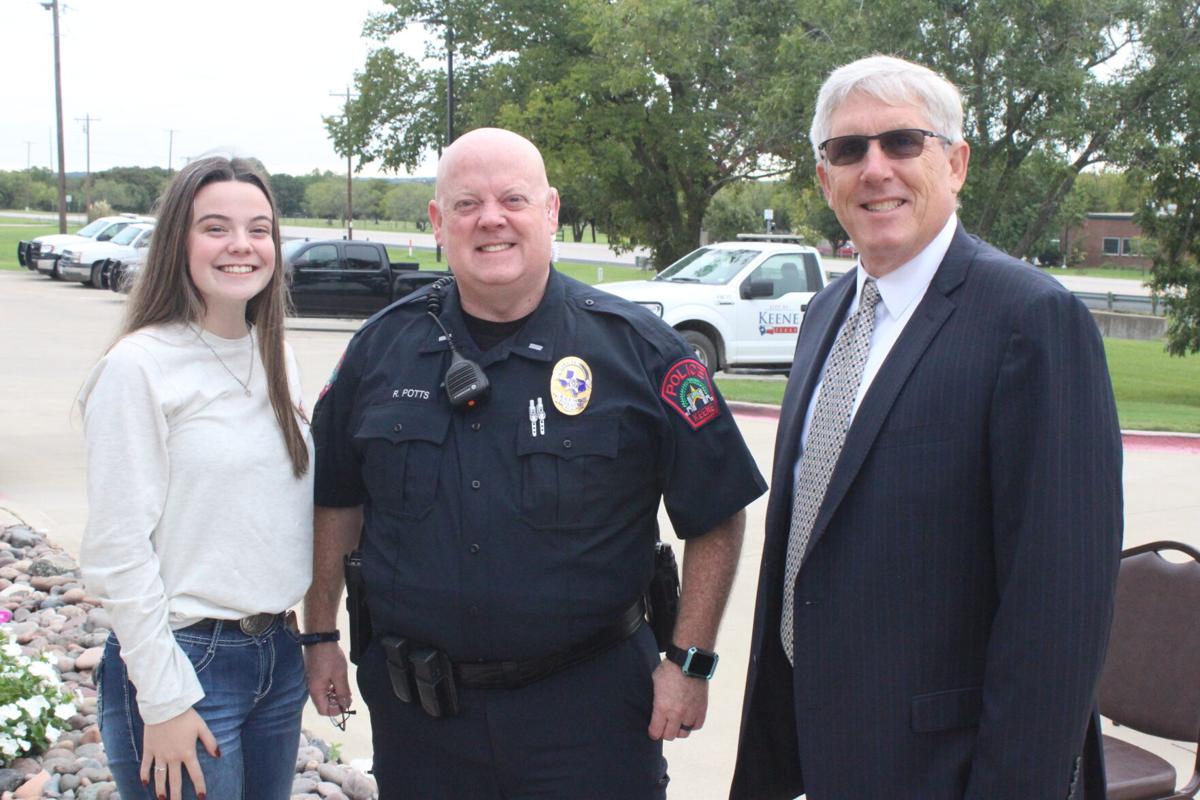 Keene Police Lt. Ronny Potts, center, with his daughter, Abby Potts, who was born one day after the Sept. 11, 2001, terrorist attacks on America. Also pictured is Pastor Russ Laughlin.

Keene Police Lt. Ronny Potts, center, with his daughter, Abby Potts, who was born one day after the Sept. 11, 2001, terrorist attacks on America. Also pictured is Pastor Russ Laughlin.

Where were you became the question on the lips of many Friday morning as residents and officials from Keene and Cleburne somberly commemorated the 19th anniversary of the Sept. 11, 2001, terrorist attacks on America.

About 30 attended a short 8:40 a.m. ceremony at Keene City Hall. Meanwhile, Cleburne residents pulled into Yellow Jacket Stadium’s parking lot throughout the day to view a steel I-beam salvaged from the collapse of the World Trade Center’s north tower.

“We talk about where we were that day,” Howerton said. “I have one firefighter here today who was less than a year old at the time. He was born the day I graduated. That kind of puts things in perspective for me, means I’m getting old.

“So, it’s the things we think about today of where we were and the things we remember from the tragic moments of that day that we’ll never forget.”

Keene Police Lt. Ronny Potts agreed adding that conversations of where everyone was 19 years ago were frequent topics of discussion throughout the Keene Police Department during the week leading to Friday’s anniversary.

“Everybody does that, remembering what they were doing during those tragic events we all lived through and saw that day,” Potts said. “Which is why we wanted to have everyone come out again, to never forget what happened on Sept. 11 that year.”

The attacks changed America, and the world, forever, Howerton said.

“Terrorists boldly attacked our great nation,” Howerton said. “Thousands of innocent citizens lost their lives. Hundreds of brave first responders sacrificed everything in attempt to save the victims’ lives and others continues to suffer and die as a result of the attacks.

“Let us show the families of those who lost loved ones due to those horrendous acts that our community, our nation will never forget. Our attendance here today shows that the American spirit will never be broken. That we will always stand strong.”

“We pause to honor those first responders who risked their lives and who lost their lives that day,” Laughlin said. “We pause to remember fellow citizens who lost their lives or are still suffering because of that day. We pause to remember the families who lost loved ones that day. We pause because we love this country and we love [God]. We pray for [God’s] blessing on our nation and on the families who are still grieving. We pray for [God’s] blessing upon our first responders who are still risking their lives to serve this country and around the world.”

Potts, in concluding the ceremony, called upon attendees to continue to pass the stories of that day on to their children to ensure that the event is never forgotten.

Potts shared his memories of the day after the ceremony. A law enforcement specialist for Texas Association of Counties, Potts was teaching a SWAT class that morning when he received a phone call from his father.

“My dad asked if I had seen the news, which I hadn’t because I was teaching class,” Potts said. “So we took a break and found out what was happening. Class was canceled and I went home. My wife and I were watching on TV and, when the towers fell, her water broke and she went into labor with our daughter Abby, who was born the next day.”

Potts subsequently applied for and was hired by the Federal Air Marshal Service.

“I flew for the next 10 years,” Potts said. “Making 4,000 flights around the world trying to protect planes from terrorist.  It was a great job, I got to see the world. But the downside was I was never home either.”

Cleburne Police Chief Rob Severance stopped short of the trailer to snap a picture with his phone before he slowly approached then reached out to run his hand over the twisted and buckled 12-foot steel beam placed in the middle of Yellow Jacket Stadium’s parking lot on Friday.

Before Sept. 11, 2001, the beam served as support between the fourth and fifth floors of the WTC’s north tower.

Cleburne Fire Department Assistant Chief Keith Scarbrough and then Chief Clint Ishmael traveled to New York in 2010 to retrieve the donated beam and bring it back to Cleburne. Cleburne was one of 1.039 to have received artifacts from the salvage of the WTC, Ishmael said at the time. The Cleburne Fire Department has since displayed the beam each Sept. 11 as well as on other occasions.

The beam now functions as an important reminder that Cleburne is fortunate to have, Severance said.

“It shows that the tragic events of that day touched so many lives across the country including Cleburne,” Severance said. “It’s important because now 19 years later we have people who were very young or not even born yet when this happened. They’re seeing TV coverage or documentaries of these events. But having this beam here is an opportunity for them to see and touch a tangible piece of what happened that day, and an opportunity for their parents to tell their kids their memories of that day 19 years ago.”

Berriochoa spent a moment looking at the beam after which he went from person to person asking where each was that morning.

Klopf, an upstate New York native, was in seventh grade math class. His father, who worked 30 years as a dispatcher in Monroe County, New York, volunteered right away, Klopf said.

“They asked for volunteers to come to New York City to aid in the relief efforts, dispatchers, police officers, firefighters and all,” Klopf said. “My dad went down and assisted for about two months while everything was going on. A few years later, when Hurricane Katrina hit, they needed as many bodies as they could get for relief efforts so my dad volunteered and was down there quite a while, almost three months.”

His father’s actions, and the events of 9/11, made an impact on him, Klopf said.

“More than thinking about being a police officer at first, 9/11 actually played a part initially in me joining the military,” Klopf said. “The realization that I needed to go do something.”

Klopf served in the U.S. Marines.

“After I got out I wanted to continue doing something that’s bigger than myself,” Klopf said. “I was a dispatcher for a while like my dad was. I got tired of being on the other side of the radio, having to listen but not being able to do anything about it. So, I wanted to do something about it and [Severance] gave me that chance.”

Klopf added that he holds dispatchers in high regard and agrees with Johnson County Sheriff Adam King’s assessment that those jobs are among the toughest in law enforcement.

“It is absolutely,” Klopf said. “I feel less stressed out on a stressful call from the officer side of things than I did when I was on the dispatcher’s side of things. Because on this side I can do something to fix the problem.”

Recalling that day, Severance said, both honors the fallen and impacted and serve as our stories as well.

“Everybody has their story and memories of what they were doing that day,” Severance said. “And because of that I think we’ll never forget, and that’s important.”