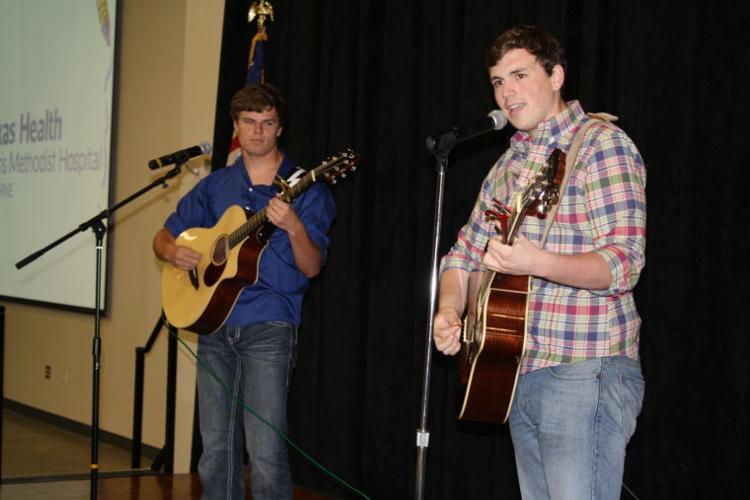 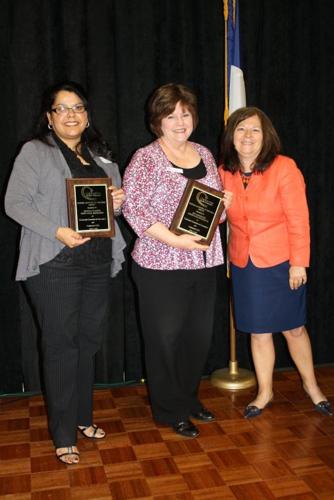 “This is my lunch box from first grade,” Magers said. “I saw the same one on ‘Antiques Roadshow’ a few weeks ago, which makes me a little depressed.”

CISD student artwork, including a Mona Lisa assembled with pieces of fabric, sat on display throughout the room.

The first order of business involved CISD Adopt-A-School Program participants and awarding the 2012 Adopter of the Year Award.

For more than 25 years, the chamber and CISD have worked together to pair local industry, business and civic organizations with schools, teachers and students. Such pairings have resulted in extra equipment and materials for schools, tutoring programs, learning opportunities and activities and other benefits.

“Our adopters are part of CISD along with the campuses, students, faculty and teachers,” Magers said. “We’re a team and couldn’t make it without you.”

Participants select the campus or school department they wish to adopt. Individual schools nominate them for the Adopter of the Year Award.

And the winner is...

The State Farm agencies of Joy McHargue, Jan Greathouse and Crystal Plaster were named Adopter of the Year for their efforts at Cooke. The three agencies funded Cooke’s Wildcat Warehouse, which rewards students who meet the school’s 4Ps positive behavior plan. Prompt, prepared, productive and polite form the 4Ps. Students displaying those virtues receive tickets from teachers, office staff, custodians, cafeteria workers and other campus employees, which are redeemable for prizes from the Wildcat Warehouse.

“I’d urge everyone in the community to get involved and work to have an effect on our younger students,” Emcee Erik Dumas said. “The Adopt-A-School program has been going on a good while and my prayer is that it continues to do so for a long time.”

Cleburne students have been busy doing all kinds of things that are making a difference, Magers said.

Third-graders Julie Hall and Grace Mitchell danced, tapped and vogued through a number both musical and comical.

April is poetry month, Magers said, but it’s been a poetry year at CISD with a record number of students being published and recognized through state and national awards.

The students who performed during the luncheon provide but a glimpse of the talents and achievements of CISD’s student body, Superintendant Tim Miller said.

Miller listed a number of those achievements:

The goal for CISD, Miller said, is to rank in the top 25 percent of all districts in the state in all areas.

“Keep raising your expectations,” Miller said. “Demand accountability of us when it comes to your children and your money. We need your help and support.”

Dumas ended the luncheon by thanking state Rep. Rob Orr, R-Burleson, who was in attendance, and praising Miller.

“I know Rob fights to bring all the money he can back to Cleburne,” Dumas said. “Problem is, he’s in Austin with a lot of other people fighting for their areas, but I think he fights better than all the rest.

“And, I think we’re very blessed to have someone with the credentials and obvious passion Dr. Miller has for Cleburne ISD.”