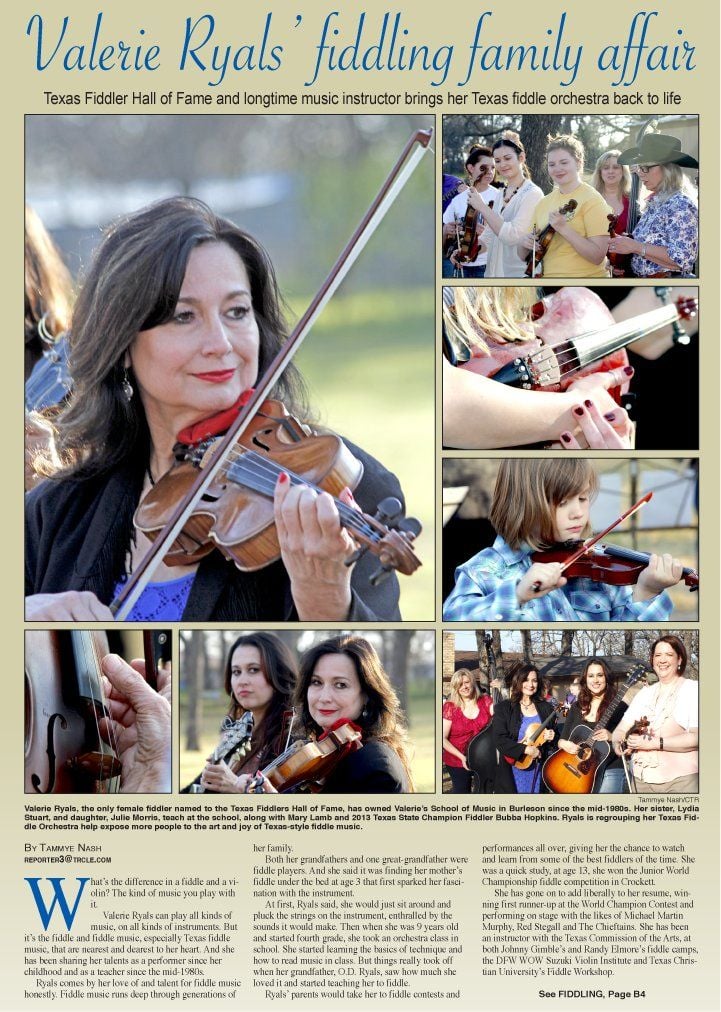 Valerie Ryals, the only female fiddler named to the Texas Fiddlers Hall of Fame, has owned Valerie’s School of Music in Burleson since the mid-1980s. Her sister, Lydia Stuart, and daughter, Julie Morris, teach at the school, along with Mary Lamb and 2013 Texas State Champion Fiddler Bubba Hopkins. Ryals is regrouping her Texas Fiddle Orchestra help expose more people to the art and joy of Texas-style fiddle music. 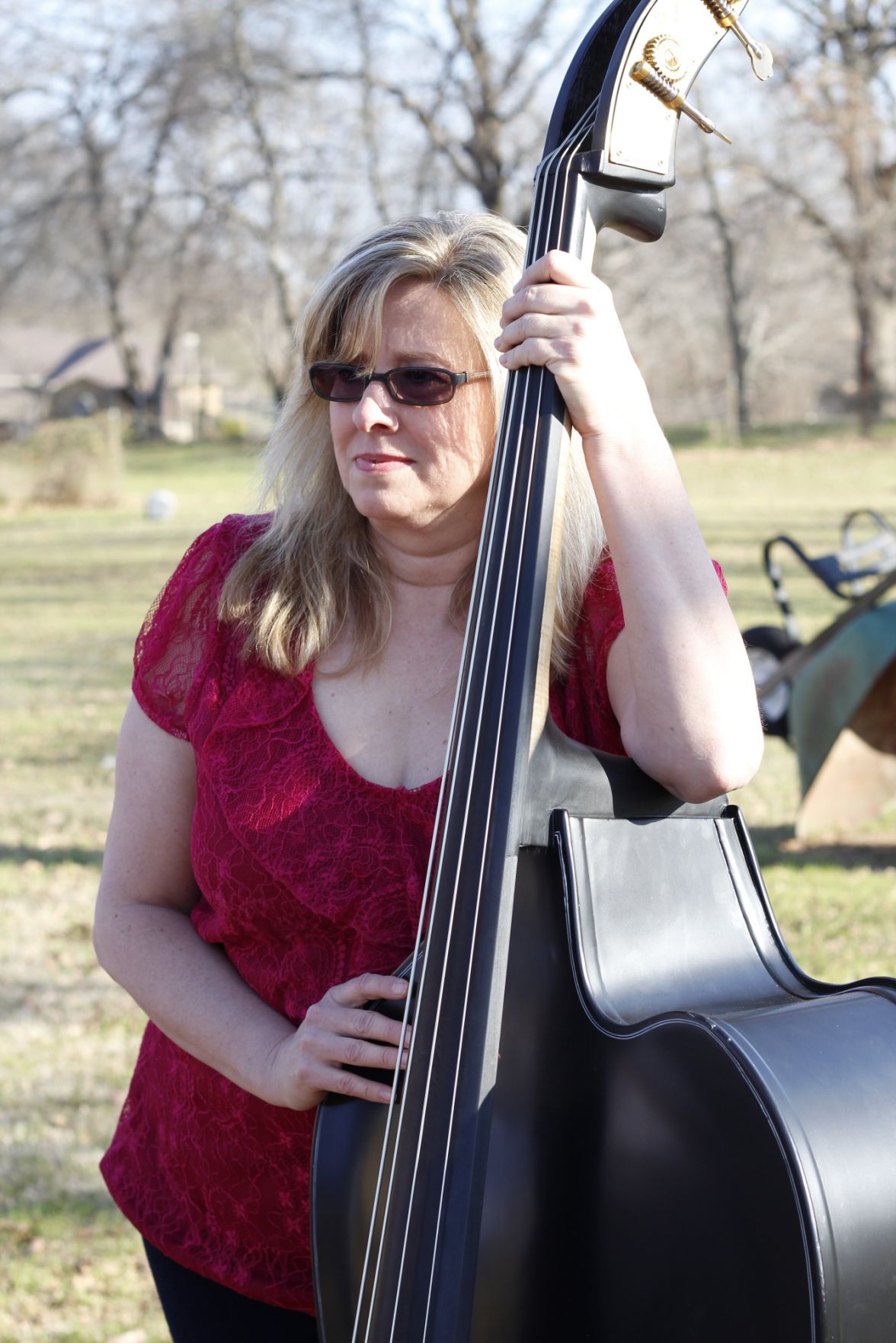 Lydia Stuart plucks on the stand-up base during a recent rehearsal of her sister Valerie Ryals’ Texas Fiddle Orchestra. 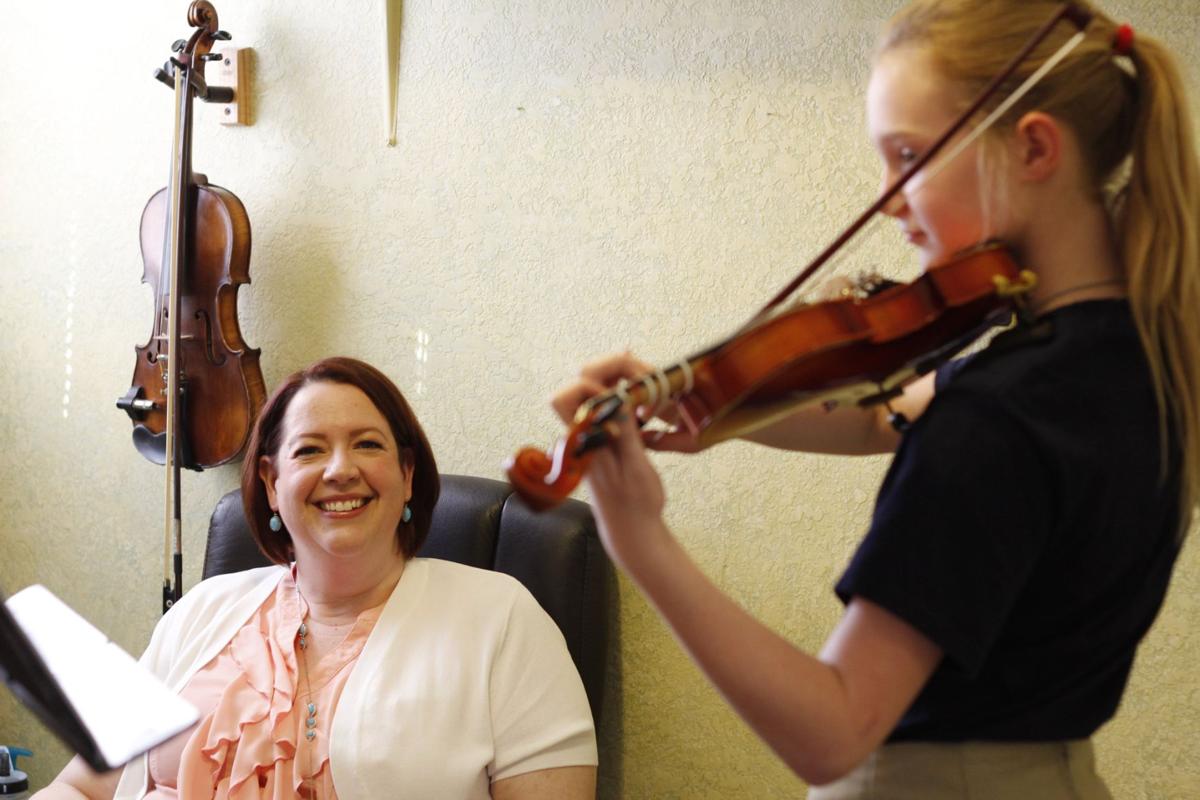 Mary Lamb, left, one of the teachers at Valerie’s School of Music, instructs a student in a more classical style of violin. Lamb says that the difference in a violin and a fiddle is the kind of music you make with the instrument.

Valerie Ryals, the only female fiddler named to the Texas Fiddlers Hall of Fame, has owned Valerie’s School of Music in Burleson since the mid-1980s. Her sister, Lydia Stuart, and daughter, Julie Morris, teach at the school, along with Mary Lamb and 2013 Texas State Champion Fiddler Bubba Hopkins. Ryals is regrouping her Texas Fiddle Orchestra help expose more people to the art and joy of Texas-style fiddle music.

Lydia Stuart plucks on the stand-up base during a recent rehearsal of her sister Valerie Ryals’ Texas Fiddle Orchestra.

Mary Lamb, left, one of the teachers at Valerie’s School of Music, instructs a student in a more classical style of violin. Lamb says that the difference in a violin and a fiddle is the kind of music you make with the instrument.

What’s the difference in a fiddle and a violin? The kind of music you play with it.

Valerie Ryals can play all kinds of music, on all kinds of instruments. But it’s the fiddle and fiddle music, especially Texas fiddle music, that are nearest and dearest to her heart. And she has been sharing her talents as a performer since her childhood and as a teacher since the mid-1980s.

Ryals comes by her love of and talent for fiddle music honestly. Fiddle music runs deep through generations of her family.

Both her grandfathers and one great-grandfather were fiddle players. And she said it was finding her mother’s fiddle under the bed at age 3 that first sparked her fascination with the instrument.

At first, Ryals said, she would just sit around and pluck the strings on the instrument, enthralled by the sounds it would make. Then when she was 9 years old and started fourth grade, she took an orchestra class in school. She started learning the basics of technique and how to read music in class. But things really took off when her grandfather, O.D. Ryals, saw how much she loved it and started teaching her to fiddle.

Ryals’ parents would take her to fiddle contests and performances all over, giving her the chance to watch and learn from some of the best fiddlers of the time. She was a quick study, at age 13, she won the Junior World Championship fiddle competition in Crockett.

She has gone on to add liberally to her resume, winning first runner-up at the World Champion Contest and performing on stage with the likes of Michael Martin Murphy, Red Stegall and The Chieftains. She has been an instructor with the Texas Commission of the Arts, at both Johnny Gimble’s and Randy Elmore’s fiddle camps, the DFW WOW Suzuki Violin Institute and Texas Christian University’s Fiddle Workshop.

Ryals was the first woman to serve on the board of the Texas Old Time Fiddlers Association, and performed for a number of years as a Texas master artist with the nonprofit organization Texas Folklife Resources. In 2009, she became the first — and so far only — female fiddler inducted into the Texas Fiddlers Hall of Fame.

(Two other women are in the hall of fame, but neither are fiddlers. Velda Ross Fryer was inducted in 1990 in recognition of her years of support and encouragement for fiddlers, especially the young ones, and for her work in planning the first Texas State Championship Fiddlers Frolics in the 1970s. The other, Betty Joyce Solomon, was inducted in 2005 in recognition of her work as an accompanist for fiddlers.)

Ryals is among the musicians featured in a 2011 documentary about old-time Texas fiddling by director Jason Hammond called “The Devil’s Box.” Back in the day, Ryal’s said, the fiddle was called “the devil’s box” because righteous folk considered fiddle music and those that made it to be sinful. But, she added with a smile, “I think this music is just heavenly, a gift from God.”

Ryals is also making her mark on the world of fiddle music in a different way. Many of the songs that she and others first learned to play on the fiddle were never recorded and never committed to sheet music. Fiddlers just learned to play them by ear, passing down the music from mentor to student over the years.

Ryals is working to fill that gap, slowly but surely creating sheet music for those old standards that she and others have been playing for years, said her daughter, Julie Morris, who is also an accomplished musician.

Ryals’ school, off East Renfro Street in Burleson, is another lasting legacy of the woman described in her Texas Fiddlers Hall of Fame biography as “a Lone Star treasure.” She can count some famous names among her students, including along with Hopkins, 2010 Texas Junior Champion Fiddler Katie Crawford. But there are plenty of not-so-famous folks among her students and former students who are helping keep the music going.

Charles Shetter said he took fiddle lessons from Ryals for about three years when he was young. Now his daughter, Charley, is taking lessons.

“I gained a lot from my lessons with Valerie,” Charles Shetter said. “The best part was playing contests all over the country and the lifelong friendships my family made with the fiddling community.”

He said he enrolled his daughter in Ryals’ music school because “I wanted Charley to have country music in her life like I did growing up, and I hope that she has as much spending time with our family and the fiddling community as I did.  It is a great activity for kids, good clean fun and provides structure for her.”

While the Texas Fiddler Hall of Fame calls Ryals a state treasure, Charles Shetter said she is undoubtedly an asset to Burleson, too.

“It is so nice to have a legend like Valerie in our hometown,” he said. “She and her family have provided a strong community of fiddle players in Johnson county for decades.”

Now, Ryals is looking to broaden the audience for Texas fiddle music even more by bringing back Valerie’s Texas Fiddle Orchestra, a group of fiddlers of all ages and at all skill levels, with a couple of guitarists, banjo pickers and even a stand-up bass player thrown in for good measure.

Last month, the orchestra traveled to San Antonio to perform at the first Crockett Fiddlers Festival held at the Alamo. The group was a huge hit, said Morris.

At a recent rehearsal, around 30 musicians and music students gathered in the fenced yard behind Ryal’s music school, off East Renfro Street. Men and women and children gathered in a loose semicircle, adjusting their instruments and listening carefully as Ryals corrects a fiddler’s stance and talks about bowing technique.

She started them off with a simple tune: “Twinkle, Twinkle, Little Star.” Then they moved on to the something a little harder. A woman standing one side held placards bearing the lyrics to songs like “Deep in the Heart of Texas” stands to one side, so musicians could sing along as they played.

For awhile, musicians in the larger group lowered their instruments to let a trio of young women called The Bluebonnet Belles take center stage. The group, led by Morris, includes Crawford, Jessica Sell and Allison Anne Wilson, three young women tuck their fiddles under their chins to play old favorites, like “Waltz Across Texas,” and then lower the fiddles to harmonize on the lyrics.

Shetter said, “My fondest memories as a child involved playing music and traveling the country with my grandparents to do so. My brother and cousin played as well, so it was something that made our family stronger and closer together.”

And as the sun sank lower in the west, Shetter’s memories of the fiddling community’s family feel played out again.

Ryals and her students and the other musicians continued to sing and play, their faces shining with enjoyment. Siblings, parents and children, husbands and wives all played together, while others — often parents, including Ryals’ own mother Phern, leaned against the wooden fence or the side of the house, smiling and tapping their feet and singing along. It was a family affair once again.