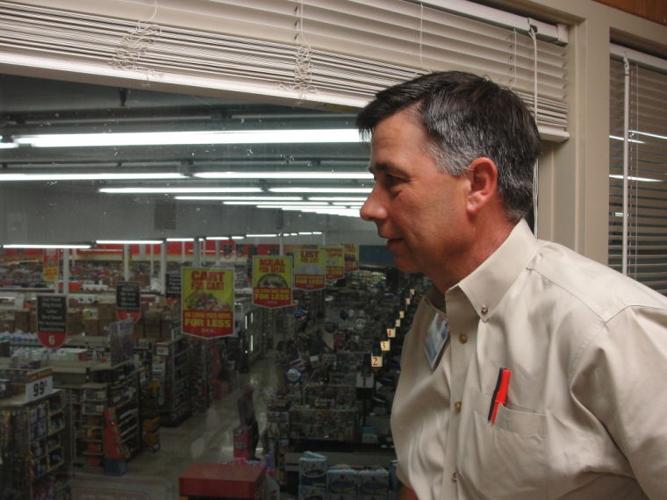 Jackie Pinkerton, H-E-B store director, has been in the grocery business since he was 16 years old. 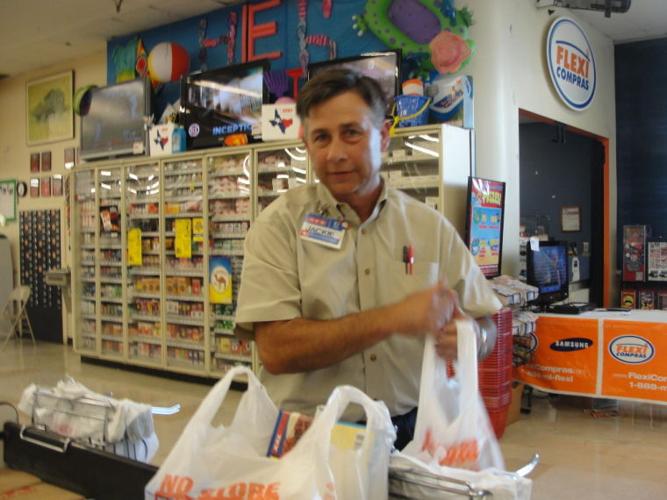 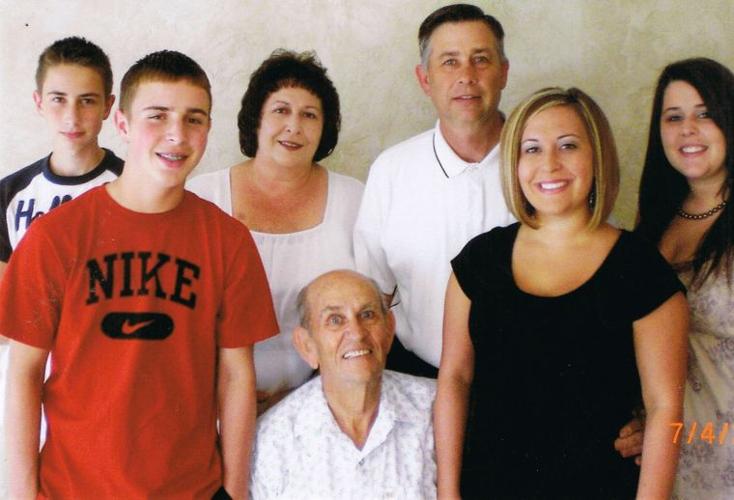 Jackie Pinkerton, H-E-B store director, has been in the grocery business since he was 16 years old.

Occasionally I talk with someone who says profound things. Jackie Pinkerton, chairman of the board of directors for the Cleburne Chamber of Commerce, for example, impresses me as a gentle guru of human relations.

The store director of H-E-B Foods has been in the grocery business for 36 years.

Cleburne’s H-E-B is open 24/7 and has 165 employees. Pinkerton is responsible for inventory and is expected to produce earnings on the investment. Since he came in 1999, the store set new company sales records nine times within 12 months.

He knew when he was 16 that the grocery business would be his career. It didn’t take management long to agree with him.

He and Linda Huffman, also of Fort Worth, married as teenagers on Valentine’s Day in 1977. They had been introduced the year before by Linda’s brother, Jimmy, and his wife, Donna. The men were co-workers at Buddies Supermarket.

Pinkerton had been born in Hillsboro. At age 5, his family moved to Fort Worth. His father, John Earl Pinkerton (who lives with them now) was a licensed electrician.

“I was his helper many times. My older sisters, Sharon and Donna, remember when Dad was a Baptist minister.

“From my 16th birthday I worked 40 hours a week after school and on weekends at Buddies. I was an average student, but I graduated early because I was so eager to get on with my career.”

At first, Pinkerton swept and mopped floors and did a lot of sacking of groceries. No task was too mundane. At age 7, he had earned a nickel for each clothes dryer he emptied of lint at the Laundromat his mother used.

The day he became 18, management gave him keys to the store. Buddies became Winn-Dixie and he became a head manager at age 20.

“They called me in to the corporate office to meet with me because they doubted I was old enough for the responsibility. But they agreed I was.”

During those years he was robbed twice.

“The first time, two armed males approached me right after an armored car service had brought in cash,” Jackie said. “They told me to go to my office, open the safe and give them the money. While one had a gun to my back one of our cashiers came in and asked if she could take a break.

“After I gave them the money they fled and I called the police. They were apprehended.”

“I opened up. Three workers came in with me and I locked the door behind us. They clocked in and as I walked into the produce department a man stood up wearing a ski mask. He had been locked inside all night waiting for me.

“He was very nervous. When he ordered me to my office he hit me on the back of my head with the pistol. It didn’t knock me out — I guess he wanted me to hurry. I opened the safe and gave him as many coins as possible to weight him down. He asked me if I didn’t have any more money and I told him we didn’t have much to start off the day.

“He ran to the front door, but the door was locked. I asked him to move so that I could let him out. I called the police, but he was never found.”

“I thought of things like, ‘What does life really mean? What is important to me?’

“When I realized I could’ve been killed, I thought about values and morals. I asked myself if this had been my last day to live if I would have gone to heaven. It reaffirmed my faith.”

As a child he had ridden the bus to South Wayside Baptist Church. He has fond memories of Vacation Bible School and making crafts. He also became a Christian when he was 12.

He managed Winn-Dixie stores in the Arlington-Dallas-Fort Worth area until 1988, when he and partners decided to buy a Worth Food Store in Haltom City. The store did well until its supplier filed for bankruptcy.

What followed was one of the most challenging periods of his career.

“We had to close, so I began work for Food Lion. They required that management trainees attend training in North Carolina for seven months. I left my wife and two children behind, getting to see them only twice in all that time.

“Without my family there I had no validation of what I was doing. It was a time of soul searching for me.

“I didn’t want to stay with the company. My roommate during that time got a job with H-E-B and told management about me. They flew me to the Woodlands near Houston to speak with them about a job. I opened the Humble, Texas, store for them and stayed there six years.”

Pinkerton considers 1992 the turning point in his career, when he began work for H-E-B.

H-E-B is a family owned company that sells no stock. It was established in 1901 by Florence Butt of Kerrville. Howard E. Butt, her youngest son, took over the business after World War I. His son, Charles, is current CEO of the 300 stores.

Pinkerton has had many human relations crises in 36 years at work.

He thought a moment. “I think everyone wants to be a success. They don’t always know the path to get them there. If they have to be separated from their employment I hope that they can learn from their mistakes and not repeat them. Failure is going to happen sometimes even when we have great intentions.

“Regarding conflicts between workers, I’ve learned that if someone reports a problem that both parties need to be present when we talk about it. I tell them it is OK to be upset; it’s not OK not to try to solve the problem. I’ll ask, ‘If the roof caved in would you choose to dig this person out? We would choose to get everyone out.

“If I am notified of someone suspected of shoplifting, I ask the customer if they need help in getting the item or items they have selected to the checkout stand. Sometimes they put the items down and rush out. However, they may be innocent, and you must save the customer embarrassment.

“If they pass up this window of opportunity to do the right thing and refuse my offer of service, we call the police and hold them until they arrive.”

He explained that he has to protect the inventory from theft in order to serve all the responsible shoppers so they can meet the needs of their families.

Pinkerton values the opportunity to serve the community as well as the customer and employee, he says.

“We sponsor the July 4 fireworks for the city, assist every church and nonprofit organization we can, deliver Meals-on-Wheels every Thursday with employees from the store, are CISD Adopt a School participants, plus other projects.”

After we met at a restaurant to talk, I followed him inside H-E-B to take photos. Any other time I had walked in the door I had thought only of myself, wondering if I could find all the items on my grocery list. For the first time, I saw the place as a bright, buzzing environment — a part of others’ lives.

I followed Pinkerton upstairs to his office.

Through large widows he can observe much of the store. Adjacent to his office is a break/classroom where each employee has access to a kitchenette, tables, and TV. Training for rotating groups of 30 is also held there. He often moves through the store and parking lot, helping others with their work.

The Pinkertons now reside in Cleburne and have three children: Brandy, Brittany, and Justin Pinkerton and one grandson, Austin Pinkerton. They are active members of Field Street Baptist Church.

Pinkerton gratefully acknowledged his family and his wife Linda’s partnership in his life.

“We’ve faced joy — and adversity,” he said softly. “We’ve always pledged,‘We are going to handle this with grace and dignity and do the right thing — all of us together.”

Good human relations, after all, begin at home.