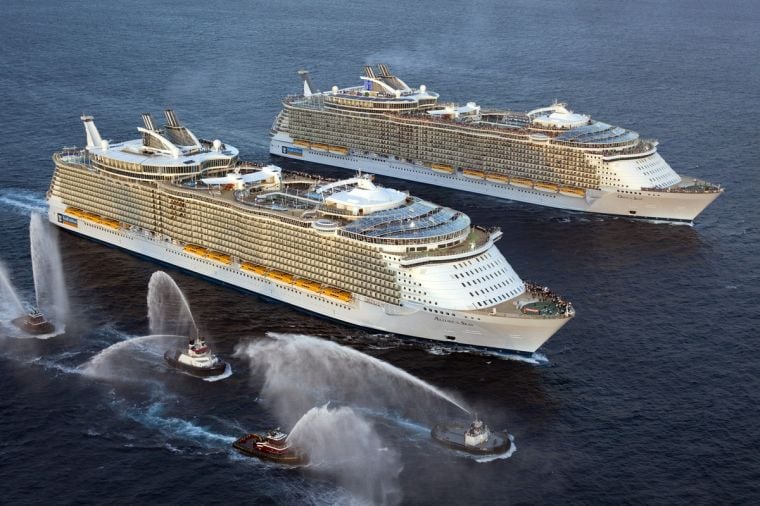 Royal Caribbean International’s the Allure of the Seas, front, is two inches longer than its sister ship, the Oasis, making it the largest cruise ship in the world. 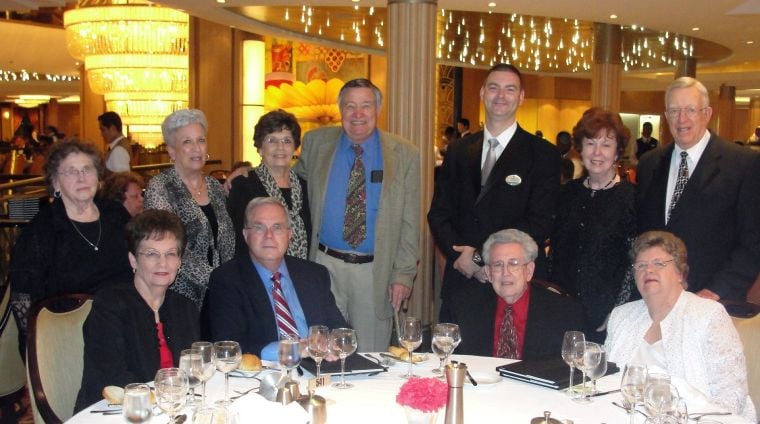 Johnson County residents recently traveled on the Allure. Front row, from left, are Faydra and Tom Jones, and James and Cheryl Hughes. Back row, from left, are Vera Calvin; Dixie Broady and Rosalie and Jim Barnes, all of Burleson; Johannes Kotze, Allure’s restaurant operations coordinator; and Larue and E.J. Barnes of Cleburne. 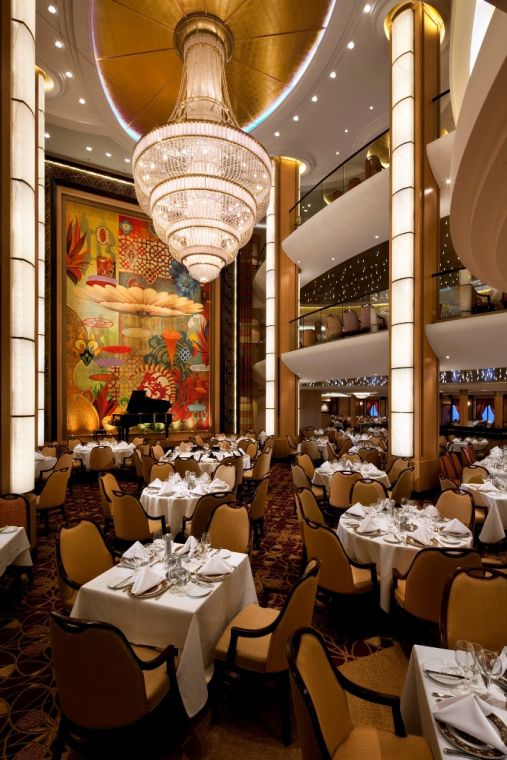 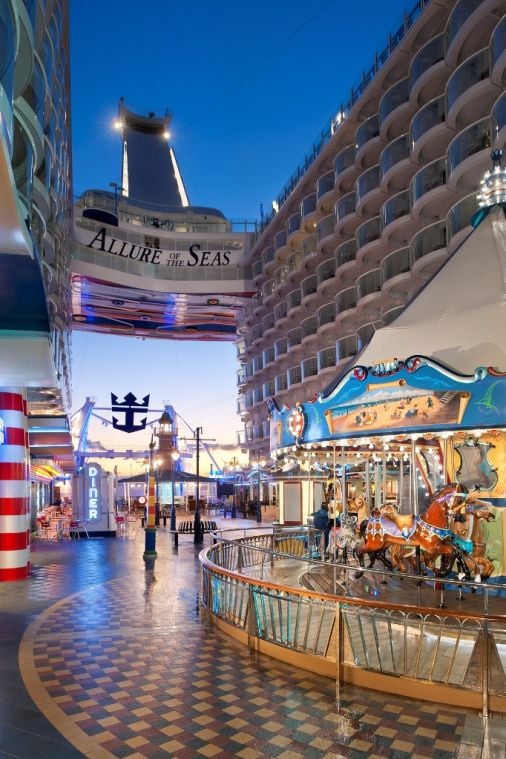 A carousel turns on the Allure of the Sea’s boardwalk.

Royal Caribbean International’s the Allure of the Seas, front, is two inches longer than its sister ship, the Oasis, making it the largest cruise ship in the world.

Johnson County residents recently traveled on the Allure. Front row, from left, are Faydra and Tom Jones, and James and Cheryl Hughes. Back row, from left, are Vera Calvin; Dixie Broady and Rosalie and Jim Barnes, all of Burleson; Johannes Kotze, Allure’s restaurant operations coordinator; and Larue and E.J. Barnes of Cleburne.

A carousel turns on the Allure of the Sea’s boardwalk.

I’d never ridden a carousel on the Atlantic Ocean before — but then, I’d never been aboard Royal Caribbean’s Allure of the Seas, either.

It is the largest cruise ship in the world.

As we approached the pier in Fort Lauderdale we were overwhelmed with the ship’s size. It is 1,187 feet long, 208 feet wide, 213 feet high from the water line, with 2,706 staterooms [1,956 with balcony,] on 16 guest decks. What makes it unique, other than its mammoth shell is its “neighborhoods” at its open center.

In the days ahead my husband, E. J. would ride the zip line, suspended nine decks high diagonally across the ship’s open-air atrium. I would smile and take his photo.

We would unpack once and spend a week of vacation in the Eastern Caribbean, traveling more than 2,000 miles. Our food, lodging and entertainment would go with us.

We explored the ship and found deck 4 to be the Allure’s entertainment place. The Casino Royale, and spacious Amber Theater, which had full production shows like Chicago and Blue Planet had featured Taylor Swift was an entertainer a few days ago, Comedy Live, Jazz on 4 and Studio B’s ice skating shows, and high diving OceanAria (at the back of the ship) all required reserved tickets but no charge.

Deck 5’s Royal Promenade has shops and clubs, and is teeming with parades and kid’s events. Salons and a fitness center were busy.

I was drawn to the Boardwalk on deck 6. That’s where a full-sized hand-crafted traditional carousel spins in its center. Fresh-made ice cream, hamburgers, hot dogs, candy, and donut aromas wafted through the ocean’s air.

And oh, the peace and tranquility of Central Park. A horticulturist-led tour described the 11,926 lush plants and trees. There were street lamps and park benches — even the sounds of birds. Some guests peacefully read books.

There were more than 5,400 guests and 2,384 crew on board, but most of the time it was not overcrowded. Interactive computer screens mapped our way anywhere on the ship.

Some guests prefer to wear shorts and flip flops all week, without dealing with formal dining. Alternate dining spots, some complimentary and open 24 hours, were available. No one was required to eat in the dining room at an assigned table. Room service is an option, as well.

I, however, enjoy having my napkin placed in my lap, being served gourmet food and being pampered a little — at least one meal a day. Two nights were formal, but very few tuxedos and floor-length dresses were seen.

The restaurant operations coordinator of the three-deck Adagio Dining Room, Johannes Kotze, agreed to an interview. I learned more than I expected.

For example, all breads and pastries are prepared with a bakery machine that makes 4,000 rolls an hour. Ice cream is made onboard. There are l,077 food and beverage employees with 19 chefs and 221 cooks, with 530 restaurant service staff.

Kotze, from Cape Town, South Africa, is a graduate of Orange Freestate University with a marine biology degree. A tall man, he played rugby all four years in high school.

I had noticed how he occasionally worked alongside the waiters and assistant waiters. He personally visited each table on all three areas to be sure the food and service were up to his personal standards.

He explained, “I have been with Royal Caribbean International for nine years. I worked for another cruise line previously and was the training manager for the Fairmont Hotel in Dubois. I wrote the procedures for standards regarding ethics, food presentation, service, and became banqueting manager at the hotel.

“I went back to South Africa and joined RCI as an assistant waiter. Within two months I was a waiter, and four years ago I became restaurant operations coordinator.”

He said he assigns waiters according to their capacity.

“Some work best with 14 to 16 guests. Our younger waiters love to run and they are happiest with 20 to 22 guests.”

Kotze was trained in computer procedures which enables the crew to use any of the electronic terminals on board in place of the previous time cards to check in and out.

“No longer do they have to punch a time card. I was consulted in the implementation of this system on all the RCI fleets. I was sent to the Oasis, [the sister ship of the Allure, although 2 inches shorter] to direct a pilot program, and now direct the program here.”

He explained the Golden Rule in dealing with your head waiter.

“The assigned table seating has been planned for 50 days prior to your cruise. Please do not move to another table. Talk to your head waiter, and please agree to sit at your table one night. It could be you will be comfortable there, after all. If not, let the head waiter make a change for you.”

Jim Barnes, my husband’s brother, and his wife, Rosalie, knew the others at our table, who were all from Burleson. We found common interests with Dixie Broady, Vera Calvin, Faydra and Tom Jones and Cheryl and James Hughes. We looked forward to talking about what we had done during the day.

Some 3,500 people may be served in the dining room during the two dinner seatings.

Crew members come from nations all over the world. Each, Katze said, must score at least 80 on a test that measures their ability to write, spell and speak English. Their ability to speak multiple languages is an advantage, as some cruisers speak little English, and look at a menu in confusion.

He said, “You will not lose anything in this dining room. Everyone knows there is an ‘eye in the sky’ watching everything they do here at work. Security is everywhere.”

The three ports we visited in the Eastern Caribbean were tropical Nassau, St. Thomas and St. Maarten. Younger guests headed for beaches or caught boats to snorkel. On a bus tour of St. Maarten we learned its 85,000 population on 37 square miles is divided into French and Dutch sections. The Dutch have the seaports and airport, while the French are known for their gourmet restaurants. Each has its separate government.

With four or five cruise ships visiting the same ports simultaneously it was easy to see that the travel industry is their top source of income. While duty-free shopping, you soon learned to hesitate before making a purchase in some venues, as the price would be lowered. Many shops, however, had set prices that were non-negotiable.

Kotze said he found a real bonus on the seas. He said, “My wife and I met on an Alaskan cruise while we were both assistant waiters. We married two weeks later in Los Angeles. She was from Serbia, and she and our daughter and son live there. She will be on the ship with me for a visit in two weeks.”

He admitted it is difficult to be away from his family. His contracts are from 6 to 9 months with 8 to 10 weeks at home.

“Technology helps so much. We have Skype and Yahoo Messenger so that we can see and talk to each other every day. I have my own cabin, as do all crew members, so private communication is easier now.”

He said the ship goes next to the Western Caribbean and there are some guests who will remain on ship. Called “consecutive cruisers,” they get first choice on show tickets, cabin choices and free laundry to get them through the next week.

Kotze said, “We have the most amazing job in the world. Our product is already here. All we have to do is please the guests. There is no check at the end of the meal.”

I thought of the first time I saw a cruise ship. I was a child, vacationing with my parents by car. It was after dark, and as my father drove by the shore, I asked what it was. Its lights brightened the entire harbor. I was in awe, thinking of all the rich people inside.

It was a place I could never go.