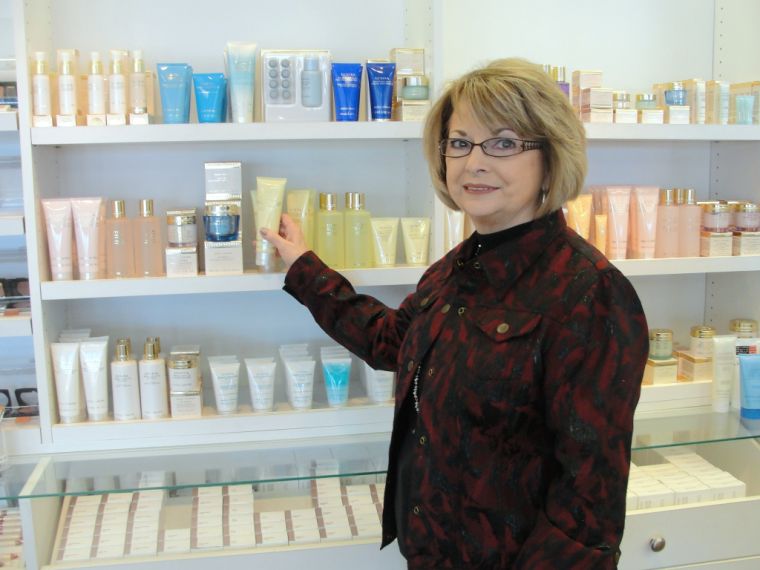 Beverly Holden owns and operates Merle Norman Cosmetics in Cleburne and Burleson. The company has been in Cleburne for 64 years. 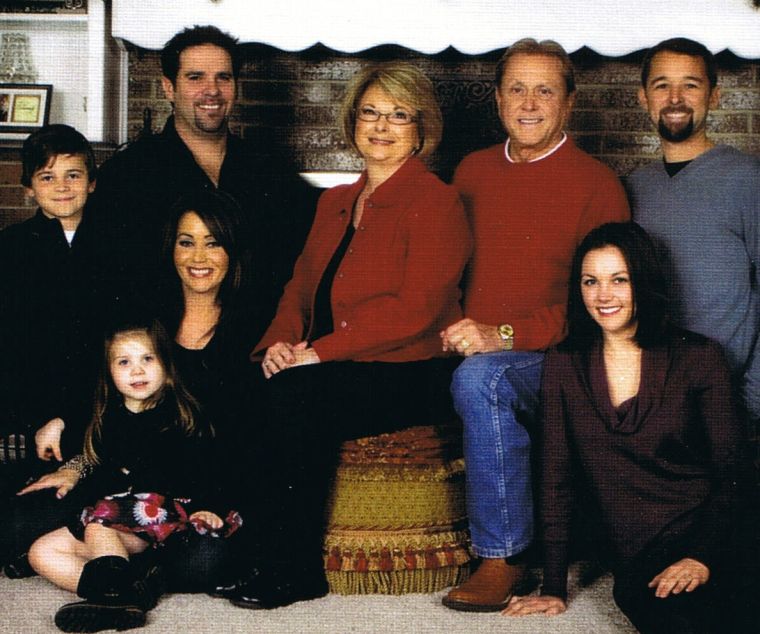 The Holden family: Beverly and Cliff Holden, center, with their daughter, Stephanie Muirhead, left, with husband, John and their children, Preston and Lily. At right is son, Cliff Holden and wife, Letitia.

Beverly Holden owns and operates Merle Norman Cosmetics in Cleburne and Burleson. The company has been in Cleburne for 64 years.

The Holden family: Beverly and Cliff Holden, center, with their daughter, Stephanie Muirhead, left, with husband, John and their children, Preston and Lily. At right is son, Cliff Holden and wife, Letitia.

Beverly Holden of Cleburne remembers her first visit to a home on Earl Street when she was a teenager. Her mother, Betty Williams, took her there to meet Sammie Smith.

From 1947 until 1971, an add-on room at the Smith residence was the home of Merle Norman Cosmetics in Cleburne.

It was a good beginning. The makeup and gift boutique has been in town for 64 continuous years.

On Feb. 16, Beverly Holden will celebrate 12 years of business at her own Merle Norman studio at 132 S. Ridgeway in Cleburne. She has recently purchased an additional studio at 437 S.W. Wilshire Blvd. in Burleson.

“After Sammie helped me, I wore the makeup faithfully,” Beverly said. “Back then we didn’t know that our faces were protected by the zinc oxide in the powder base. I remember getting sunburned but my face was untouched. ”

The business was bought from Sammie Smith by Pat Starnes in 1971. She operated the studio from the Smith’s location at first, moved it to the Cleburne Shopping Center, and then to the current location.

“I was a hair stylist and worked for Nell Fine,” Pat said. “She took me to Sammie’s one day. I realized I was very interested in the business and asked her if she would consider selling. She thought about it and we agreed on the sale very soon.

“I had never worn the cosmetics before. Once I did, I’ve never changed.”

Beverly said, “Pat sold the business to her daughter, Susan Carter Haynes in 1980. Joan Nowlin bought it in 1983. My husband, Cliff, and I became owners on Feb. 16, 1999. Cliff has had more than 35 years of experience in construction and he is very good at remodeling. We expanded the space.”

Beverly said it was a frightening experience to be handed the keys to a business without knowing much about the product inventory.

“I desperately tried to figure out where everything was. I was so busy with customers coming in — I just had to ask them to be patient with me.”

A trip to the company’s home office in Los Angeles for training was a lifesaver, she said.

“During those two and a half weeks I learned what I needed to know. The training was very thorough.”

She also learned about Merle Norman, the company’s founder.

Born Merle Mozelle Nethercutt in 1887, in Logansport, Ind., she graduated from South Bend High School, attended Chicago University and then Teacher’s College in the early 1900s. In 1912, while teaching school, she met Andrew Norman, whom she married in 1913.

He was a suave newspaper man doing real estate advertising, and they traveled the country together, a company booklet recorded.

Settling in Ocean Park, Calif., in 1921, they were joined by the three children of her brother, whose wife had died. One of the children, J.B. Nethercutt, had been born about the same time as the Norman’s son who had died in infancy. He shared her interests.

In the early 1920s she began studying medicine and chemistry at a small private college and experimented with various forms of cosmetics. She created the formulas on which her line was based. She made cosmetics in a large coffee pot on her kitchen stove, stirring the ingredients with a sawed-off broom handle. Once satisfied with the new compounds, she began selling them. She was assisted by her nephew, J.B.

Merle Norman’s husband offered women free samples of the cosmetics as he did his real estate work. Afterwards, they wanted to buy them. In 1929, she received a $50,000 offer from a big New York cosmetic company, interested in buying her powder base formula.

In November 1931, with a capital of $150, Merle rented a store in Santa Monica near their home and opened a tiny studio where she continued to manufacture and sell her cosmetics. Her selling method was to demonstrate the application and use of the products.

Even though the country was in the midst of the Great Depression, by 1932, business increased. She hired her nephew to join the business. Eventually J.B. and his wife, Dorothy, established Nethercutt Laboratories which took on the manufacturing responsibilities of Merle Norman Cosmetics.

With new headquarters in Los Angeles, the matriarch of the company continued to help others open studios. Conventions were viewed almost like family reunions as well as business meetings.

In 1963, she turned over the mantle of responsibility to J.B., who carried on the family business and traditions.

Following the deaths of Merle Norman in 1972, and the Nethercutts in 2004, the company is now owned by J.B. and Dorothy’s son, Jack Nethercutt II.

The company is celebrating 80 years with more than 2,000 studios.

As Beverly opened her studio, she said she used skills she learned at school and previous job experiences in office work.

“At Cleburne High School, I was a quiet student. I never wanted to get into trouble. I felt so comfortable in homemaking classes with Mrs. Mary Martin and Mrs. Lucille Jordan. I was attracted to color and design. I liked everything about it.

“When I graduated from high school, Eileen Smith, a friend from Lubbock, and I took a John Robert Powers Modeling School course in Fort Worth. I learned self confidence, about makeup and how to apply it; what type of hair style I needed; how to walk. Even though I never worked as a model I felt more confident in meeting people. It was really what I needed.”

Beverly has met many people in her lifetime, adjusting to new environments.

She was born in Tacoma, Wa., while her father, Ray Williams, was in the U.S. Army. The family moved here from Lubbock in 1958, and Beverly graduated from Cleburne High School in 1963.

She and Cliff Holden of Cleburne married in 1964. His work with Texas Power and Light Company moved them to several Texas locations until they returned to Cleburne in 1974.

They have two children who are CHS graduates. Their daughter, Stephanie Muirhead, now lives in Frisco, with her husband, John, and their children, Preston and Lily. The Holden’s son, Cliff, and his wife, Letitia, live in Austin.

Today in her work Beverly encounters customers who have the same needs she once had.

“Through makeovers I’ve seen some amazing transformations. Looking better can help anyone. But if the person is shy, has experienced trauma or if they are feeling down, it can make a great change — knowing that they look their best. I can look at someone and tell immediately if they use our skin products.”

She says that in the work she has become a better listener and has learned the importance of remembering names.

“Sometimes people need to tell you things. Occasionally they may be upset. Years ago if I had encountered an angry person I would have been scared to death. I was very naïve. I’ve learned to help calm people and I truly believe that the customer really is always right. Most of my customers are very gracious people.”

She enjoys going to market to buy jewelry and has found that Cleburne and Burleson customers make different choices.

“Cleburne customers are basically conservative, while those from Burleson are less so — more like the city, I guess. It’s a challenge to buy beautiful things that are not too expensive.”

“I spend time in both places and want to give personal attention to as many customers as I can. I’m helped so much by my four employees: Mary Whitlock and Carla Bush in Cleburne and Rebecca Bowyer and Denise Tadsen in Burleson.”

“I want to express appreciation to my Cleburne customers as we celebrate 12 years of serving them. There will be drawings and specials all through the day.”

I asked her for her secret for selling.

She smiled and answered quickly, “It’s easy. You just have to believe in your product.”

Sammie Smith would be pleased. She made a good sale.

Sharon (Miller) Ray, 75, of Cleburne passed away January 20, 2022 in Fort Worth. Service: Family will hold a Memorial Service at a later date.

Karl Dean Bradley, 66, died 20 Jan at home in Burleson. He was borne 23 Jul 1955 in Porterville, Tulare Co, California to William Albert Bradley and Myrtle Elvada Bomar. He is survived by: Aunt Marie Petty Shulenberger of Whitney, Sisters Charlotte Bradley of Burleson and Janis Bradley of Wa…