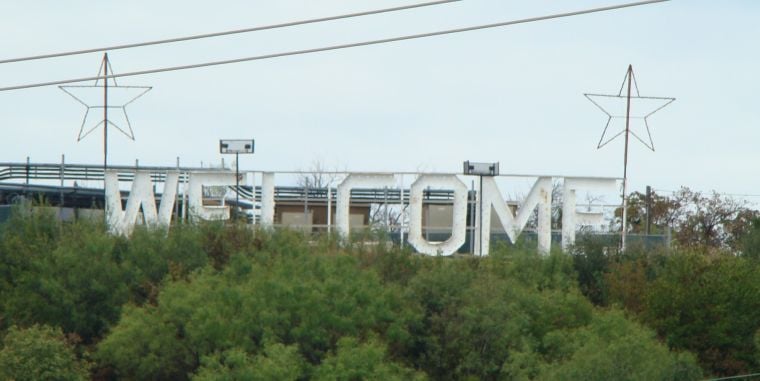 On Welcome Mountain, the “Welcome” sign is at the top, next to the radio tower. 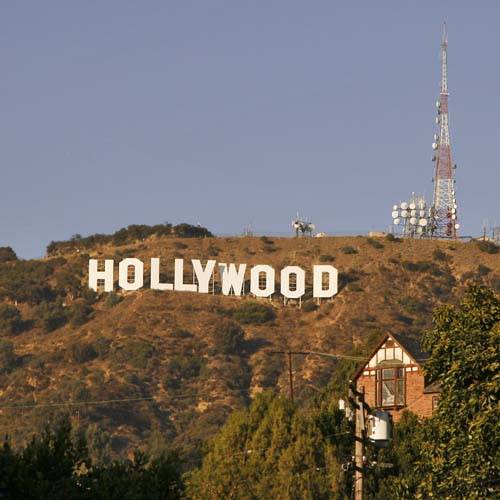 Did the famous “Hollywood” sign have its origins in Mineral Wells? Some think so.

On Welcome Mountain, the “Welcome” sign is at the top, next to the radio tower.

Did the famous “Hollywood” sign have its origins in Mineral Wells? Some think so.

The sign was given to the city of Mineral Wells in 1922 by George Holmgreen of the San Antonio Iron Works with the understanding that the city would maintain the many electric bulbs in it. At the time of its installation it was the largest noncommercial, electrically lit sign in the country. It was originally placed on Mineral Wells’ East Mountain. This well-known landmark has had a number of highs and lows.

Over the years, the sign deteriorated through a combination of neglect and constant exposure to the elements, which robbed the historic creation of its former glory.

In 1972, a Warrant Officer Club stationed at Fort Wolters stumbled across the weathered sign and moved it from the city’s East Mountain to the Bald Mountain, where it could greet visitors traveling west into town on U.S. 180. Although the move brought a resurgence of excitement over the sign and spurred the renaming of Bald Mountain to Welcome Mountain, the landmark was soon forgotten and left to erode once again.

Eleven years passed before fate stepped in and led a local radio station owner up the eastern face of Welcome Mountain. The station’s owner was scouting placement for a new broadcasting tower when he stumbled across the remains of the famed sign. After realizing what he had found, the owner teamed up with the city of Mineral Wells and more than 50 volunteers who gathered together to restore the old sign to its full glory.

This may have been known as Bald Mountain when the sign was placed at this site. However, today the trees have pretty well taken over the mountain and the lower section of many of the letters are hidden by the trees. It would help to show off the sign if these trees were cut down or at least trimmed back from the sign.

Many residents believe that Mineral Wells’ own “Welcome” sign, which was built before Hollywood’s hillside sign, may have been the inspiration for one of California’s most iconic landmarks.

Here is how that story started, according to the Mineral Wells Chamber of Commerce.

During the 1920s, Mineral Wells was known far and wide for the curative powers of its mineral waters. People came from all over the country to partake of these special mineral waters, including presidents and movie stars.

On East Mountain, the sign’s location and direction made it visible to most of the visitors arriving in Mineral Wells. The Bankhead Highway from Fort Worth and other places east of Mineral Wells entered the city from the south along what is now SE 6th Ave., and beginning in January 1891, the Weatherford,

In 1927, D. W. Griffith (movie producer of the silent film classic “The Birth of a Nation” and the “Keystone Kops” comedies) was a visitor to Mineral Wells. There is a picture of him standing on the Roof Garden of the Crazy Water Hotel at the Chamber of Commerce office.

From this vantage point Griffith’s attention was drawn to the impressive “Welcome” sign, and it apparently made an indelible impression on him because shortly after returning to Los Angeles, Griffith and partners started a land development project they called Hollywood Land and erected a large electric lighted sign with the words “Hollywood Land” on the mountain above the project.

Griffith and his partners seem to have been better film producers than real-estate developers because the housing project was a financial failure. However, there were extenuating circumstances for the failure of the land development. The Stock Market crash on Black Friday, Oct. 29, 1929, didn’t help.

Now, here is where we get a little discrepancy in the story. According to the Hollywood sign website, the sign was erected in 1923. Each story, however, states that the original sign was for the Hollywood Land Development company, which went out of business during the Depression. The “land” part of the sign was removed after the 1930s, leaving “Hollywood” on the side of the mountain where it remains to this day.

John Watson is a Cleburne resident who can be reached at texastraveler@sbcglobal.net.