"“It’s like walking into a ghost town”: Under tight pandemic restrictions, college football returns to Austin" was first published by The Texas Tribune, a nonprofit, nonpartisan media organization that informs Texans — and engages with them — about public policy, politics, government and statewide issues.

On game days in Austin, Jon and Julie Amberg perch in a shaded courtyard with a perfect view of Bevo Boulevard, the hourslong street party that invites thousands of Texas Longhorn fans to dance, drink and celebrate the team’s mascot, a live steer named Bevo, as he arrives at the stadium.

This year, the Ambergs, season ticket holders for more than a decade, were among a handful of people quietly milling outside Darrell K Royal-Texas Memorial Stadium as handlers escorted Bevo from his trailer a few hours before kickoff – without any fanfare.

“It’s like walking into a ghost town,” Julie Amberg said from behind a burnt orange mask.

On Saturday, the University of Texas at Austin took the field against the University of Texas-El Paso in front of just over 15,000 fans, marking the start of an unusual season for major college football programs in Texas as the state continues to report thousands of new coronavirus cases a day and local health officials warn against in-person arena events.

With groups kept six feet apart in the stands, several fans said there was plenty of space to safely enjoy the game in the 100,000-seat stadium, even as many people flouted the rules by going maskless in their seats. 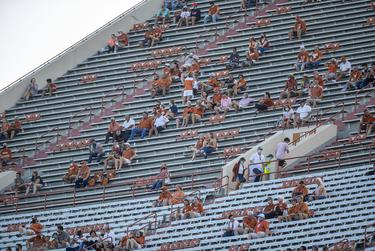 Just over 15,000 fans attended UT's game against the University of Texas-El Paso at Darrell K Royal-Texas Memorial Stadium, which has more than 100,000 seats. Credit: Ricardo B. Brazziell/American-Statesman via USA TODAY NETWORK/REUTERS

Outdoor gatherings in Austin are still capped at 10 people or less, but Gov. Greg Abbott has allowed sports to resume with limited fans in the stands. The game’s announced crowd was significantly smaller than the 25% capacity UT-Austin allowed under the new rules.

Approximately 3,000 UT-Austin students who purchased football season tickets were required to take COVID-19 tests Friday and test negative before they could attend the game. The same precautions, however, were not required of the thousands of other fans.

Among the 1,198 students who got tested, 1,103 were negative and 95 were positive, John Bianco, a spokesperson for the university's athletic department, said in an email. Of those who tested negative, 1,051 claimed tickets and 969 scanned in at gates prior to kickoff, Bianco said.

As of Friday morning, there were no active COVID-19 cases among the players for either team, according to the schools’ athletics officials.

But the virus has already forced two Texas schools in the Big 12 Conference to call off games: Texas Christian University was supposed to play Friday, but delayed the game after some players and staff tested positive for COVID-19, and Baylor University postponed its Saturday game after several Louisiana Tech players tested positive. 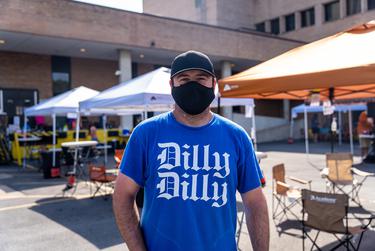 Ryan Lepper, owner of Horn-Ball Texas Tailgaters, poses outside his arrangement of tents for the University of Texas home opener vs. UTEP on Sept. 12, 2020. Credit: Jordan Vonderhaar for the Texas Tribune 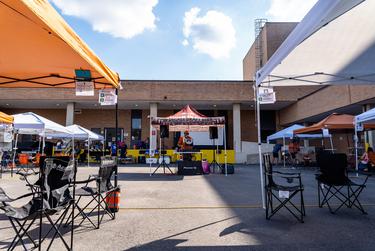 Pregame celebrations near the stadium were virtually nonexistent; university officials banned tailgating on school property. But one group got state approval to use a parking lot across the street from the university where small clusters of fans could gather at a distance under orange and white tents.

“We’ve been doing this for over 20 years, and we said, ‘Can we find a way for us to do this that meets all the guidelines and executive orders?’” Ryan Lepper, owner of the Horn-Ball Texas Tailgaters, said from behind a black mask. “We produced something that people can come out and enjoy in a safe way.”

Before the pandemic, Lepper said the group’s tailgates normally attracted up to 700 fans under large tents, complete with a 20-foot-long bar staffed by six bartenders.

But on Saturday, less than two hours before kickoff, about 20 people hovered inside their assigned tents, eating prepackaged snacks as a masked deejay played music from a center console. Guests had their temperature taken at the entrance and were asked whether they had symptoms of the virus or had been around anyone who had symptoms.

When the doors opened to the student section at 5 p.m., around 50 to 70 students clad in burnt orange, some donning cowboy boots and hats, filed into the stadium with tickets pulled up on their phones.

Standing near the front of the line was Caleb Boujemaa, president of the Longhorn Hellraisers, a student group known for painting orange and white letters on their chests that spell out “TEXAS.”

Boujemaa acknowledged that touching and sharing paint adds a level of risk, but said it’s worth it to bring energy to the crowd. He said he feels good knowing that everyone in his group tested negative for the virus, and those who didn’t feel comfortable coming were able to opt out.

“At games you see us being stupid, shirtless,” Boujemaa said from behind a mask with an image of the Texas flag. “We’re going to do it, but it’s definitely not as safe this year.”

As fans waited for the game to begin – without the band and its traditional pregame performance – they bought concessions and Longhorn merchandise from behind plexiglass barriers. Bathroom doors were kept open to increase airflow and water fountains were taped off from use. Signs and floor markings encouraged social distancing, and the university added 225 hand sanitizer stations throughout the stadium. 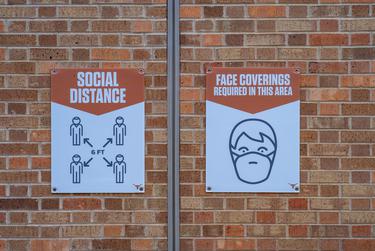 Signs encouraging mask wearing and social distancing were posted around the stadium. Credit: Jordan Vonderhaar for the Texas Tribune

As students filtered in, staff explained the rules for keeping distanced from each other. Many seats were marked off-limits with an orange sticker reading “Seat Unavailable” and “Thank you for social distancing.” Students were told not to sit on seats with stickers.

Beyond the testing requirement, school officials kept a close eye on students during the game. Stadium staff strictly enforced the mask requirement in the student section, asking students to put their masks back on if they removed them for any reason other than to take a quick bite or drink. 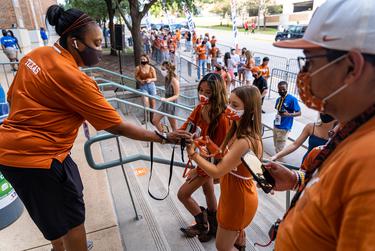 Scanning tickets at the student entrance to the Darrell K Royal-Texas Memorial Stadium for the first home football game of the season at the University of Texas at Austin on Sept. 12, 2020. Credit: Jordan Vonderhaar for the Texas Tribune 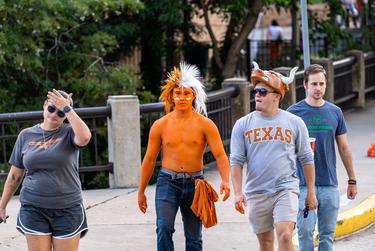 People generally masked up while walking through the stadium, but many fans ditched their masks once they were seated. In some rows, entire groups of people went maskless, high fiving each other when the Longhorns scored and loudly singing along to a recording of “The Eyes of Texas.”

Sofia Paz, a UT-Austin freshman, said her first-ever game experience was not what she imagined, but she enjoyed watching the Longhorns take an early and easy lead over the Miners. Paz said she was disappointed, however, that some fans weren’t wearing masks.

“I’m here with my Germ-X and my mask, so I feel safe,” Paz said from behind a black mask.

Wade McDonald, a season ticket holder, said most people wore masks in his section, and staff there did a good job enforcing the new rules. The first time he’d removed his mask all night was to eat a corndog during a break between quarters, he said.

“It feels very surreal to be here, but it is what it is,” McDonald said, adding that he was shocked to walk down an empty San Jacinto Boulevard before the game. “Some sense of normalcy is very important, and I think this is good.”

Disclosure: The University of Texas at Austin, Texas Christian University and Baylor University have been financial supporters of The Texas Tribune, a nonprofit, nonpartisan news organization that is funded in part by donations from members, foundations and corporate sponsors. Financial supporters play no role in the Tribune's journalism. Find a complete list of them here.

This article originally appeared in The Texas Tribune at https://www.texastribune.org/2020/09/13/university-texas-coronavirus-college-football-longhorns/.

The Texas Tribune is proud to celebrate 10 years of exceptional journalism for an exceptional state. Explore the next 10 years with us.