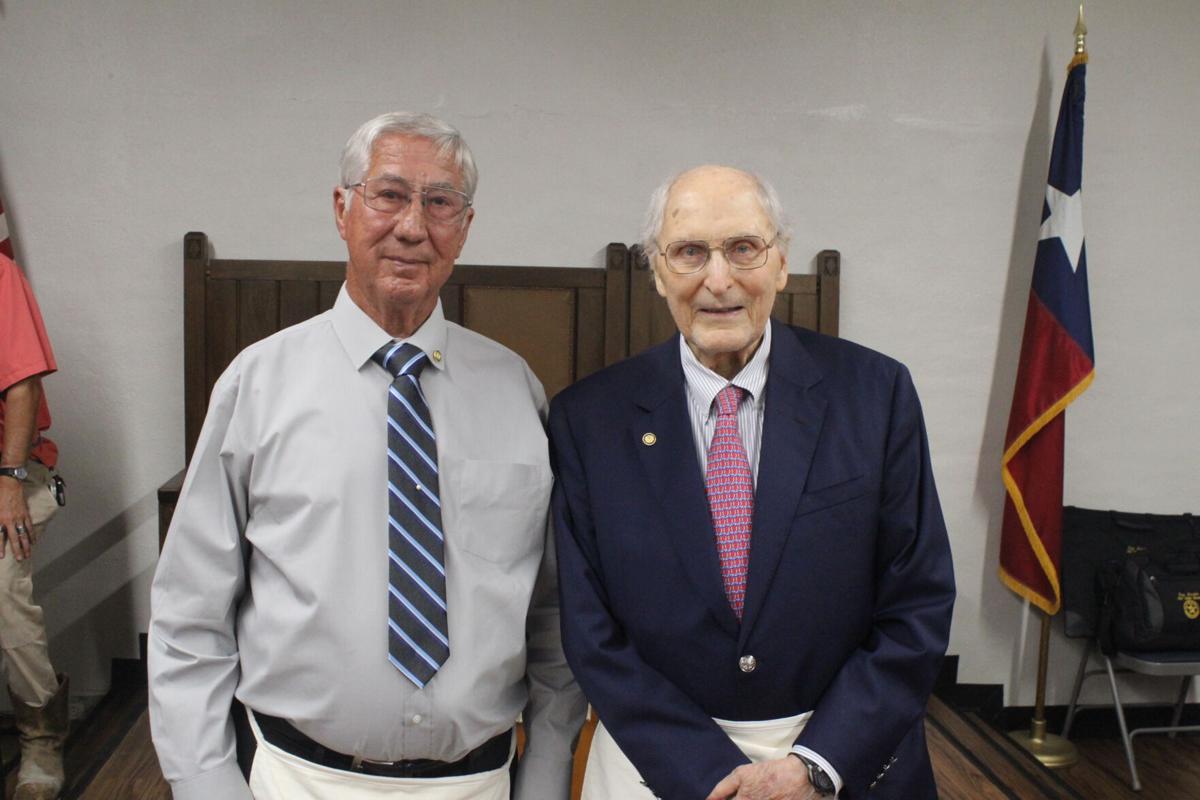 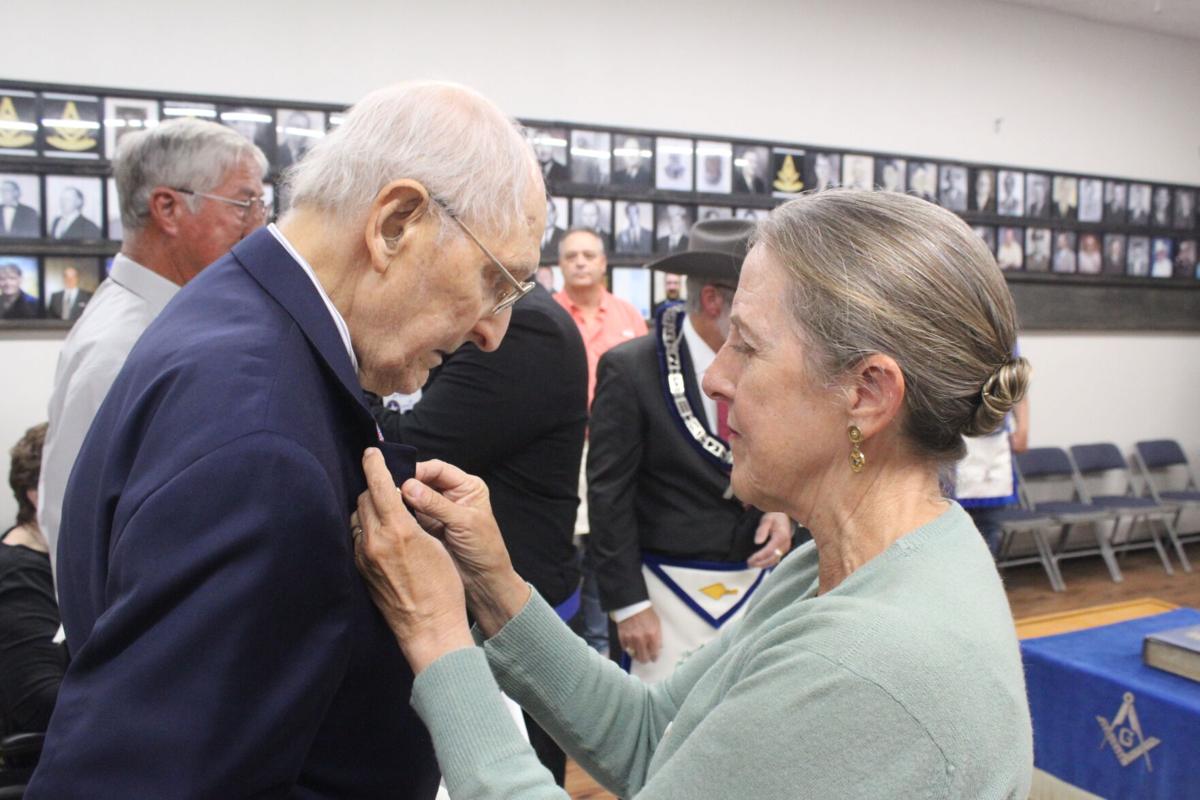 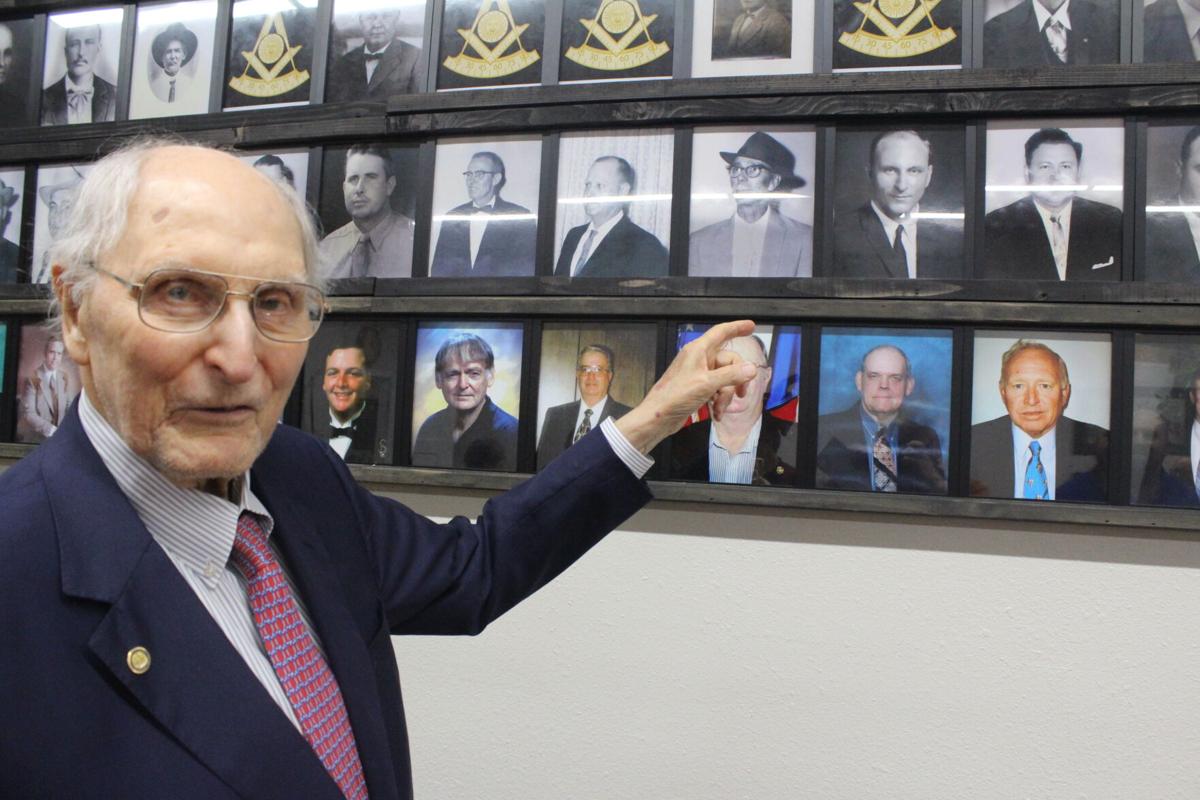 Rio Vista Nolands River Masonic Lodge No. 453 member Lowell “Stretch” Smith Jr. points out a picture of himself from 1963 when he served as worshipful master of the lodge. Fellow masons honored Smith’s 65 years of membership in the lodge on Thursday night.

Rio Vista Nolands River Masonic Lodge No. 453 member Lowell “Stretch” Smith Jr. points out a picture of himself from 1963 when he served as worshipful master of the lodge. Fellow masons honored Smith’s 65 years of membership in the lodge on Thursday night.

Dalby joined fellow masons, family members and guests Thursday night at the Rio Vista Lodge to honor Smith and Junge’s years of service and brotherhood and, in the words of one fellow lodge member, bestow upon them “an award that comes to very few men.”

Before the presentations, however, Dalby reflected on the benefits of age and wisdom.

“With age has always been the crowning glory of a man,” Dalby said. “It affords an opportunity to reflect  upon the past. From the experience of the past the present receives its most useful counsel.

“It is age we look to for wisdom and it is wisdom that built each and every lodge member here and it is an honor to present these service awards tonight to two of our distinguished members.”

Lodge members honored Junge for more than 50 years membership in the lodge and Smith for 65 years of membership.

Jay Scogin, 2021 district deputy grand master District 63, presented certificates to both men after which Dalby presented pins to them.

“The Most Worshipful Grand Lodge of Texas has seen fit to give [Junge] a gold emblem for over 50 years of membership,” Dalby said. “And to [Smith] a gold emblem with a diamond, two diamonds actually. One diamond is for 60 years of service and the second is for 65 years.”

Lodge 453 Worshipful Master Blake Jones commended the contributions of both men to the lodge through the years.

“I think I speak for everyone here in saying that, when I joined this fraternity it was because men like you who set the bar so high to what young men like me aspire to be. We thank you both for your service and fraternity and all we can do is pay forward everything that you both have given to us.”

With family members looking on, Junge appeared truly touched and said he would try to get through his brief remarks without becoming too emotional.

“Thank you all for your kindness, your generosity and your brotherhood,” Junge said. “For all the pleasures that masonry has given me over the past 50 years I have received much more than I have ever given.

“I will be forever grateful to Rio Vista Lodge 453 for the rest of my life and it has been a real pleasure to know each and every mason who passed through these halls.”

“When I came in and saw the wall of pictures and all the people who I have known through the years, it was really impressive to see that,” Smith said.

Smith spoke too of the importance of the Rio Vista Lodge to the community.

“I think the most impressive thing of all is how much this lodge has done for others,” Smith told fellow members. “You all have done an enormous amount of charity and it’s amazing what you have done. As a citizen I appreciate that and as a lodge member I appreciate that.”

Lodge member Tony Cashion and others pointed out that Lodge 453 ranks No. 2 in the state for charitable work and giving among Masonic Lodges in Texas.

Reflecting back, Smith joked that 65 years is a long time.

“I remember the night I came into the lodge,” Smith said. “The lodge met above Seth Pyaatt’s Grocery Store, which was a two-story building and you had to climb the outside stairs to get up there. I also remember that my grandmother was always real interested in the [Order of the Eastern Star]. I also remember her telling me that when she was a little girl she ran up the hill here on the west side of town to see the first train.

“She’d never seen a train to that point. She’d heard it and said all the people in town had talked about it. The railroad workers were building tracks on up to Cleburne. So she ran up the hill that day to see her first train. There’s a lot of history here and a lot of history that my family has been involved with and through it all the lodge was always there.”