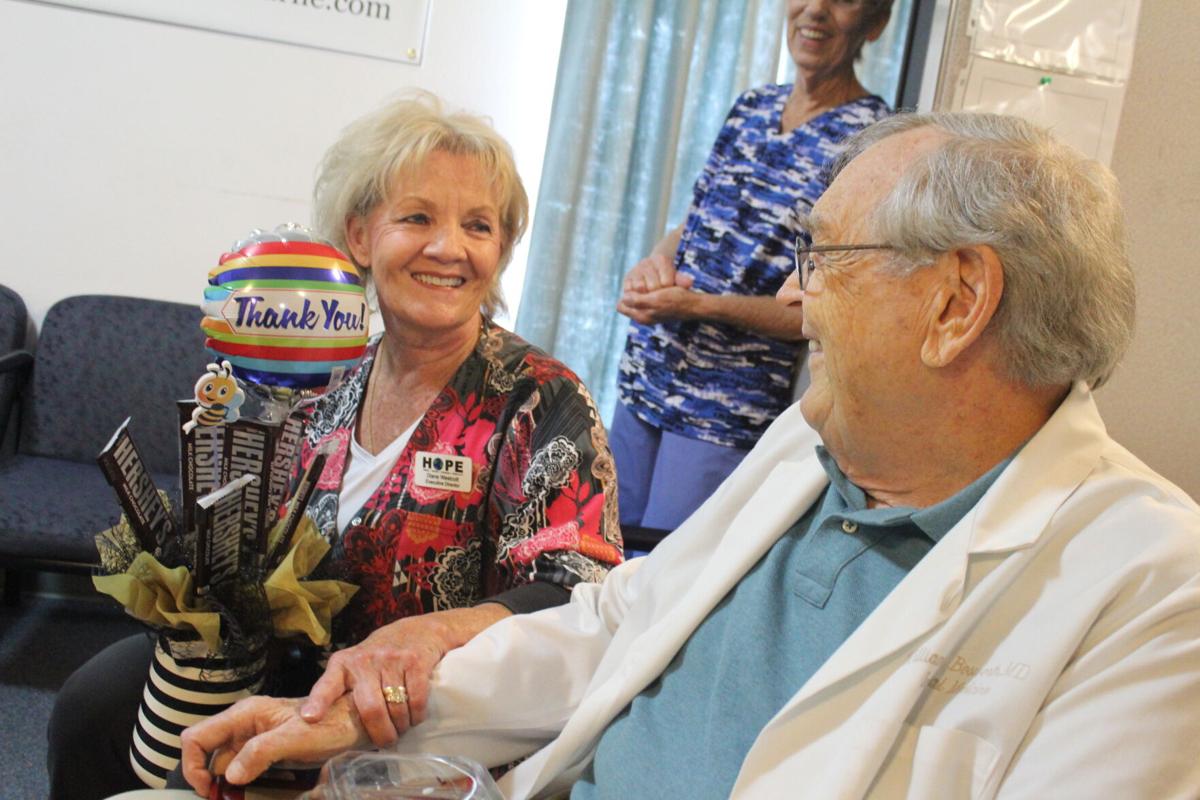 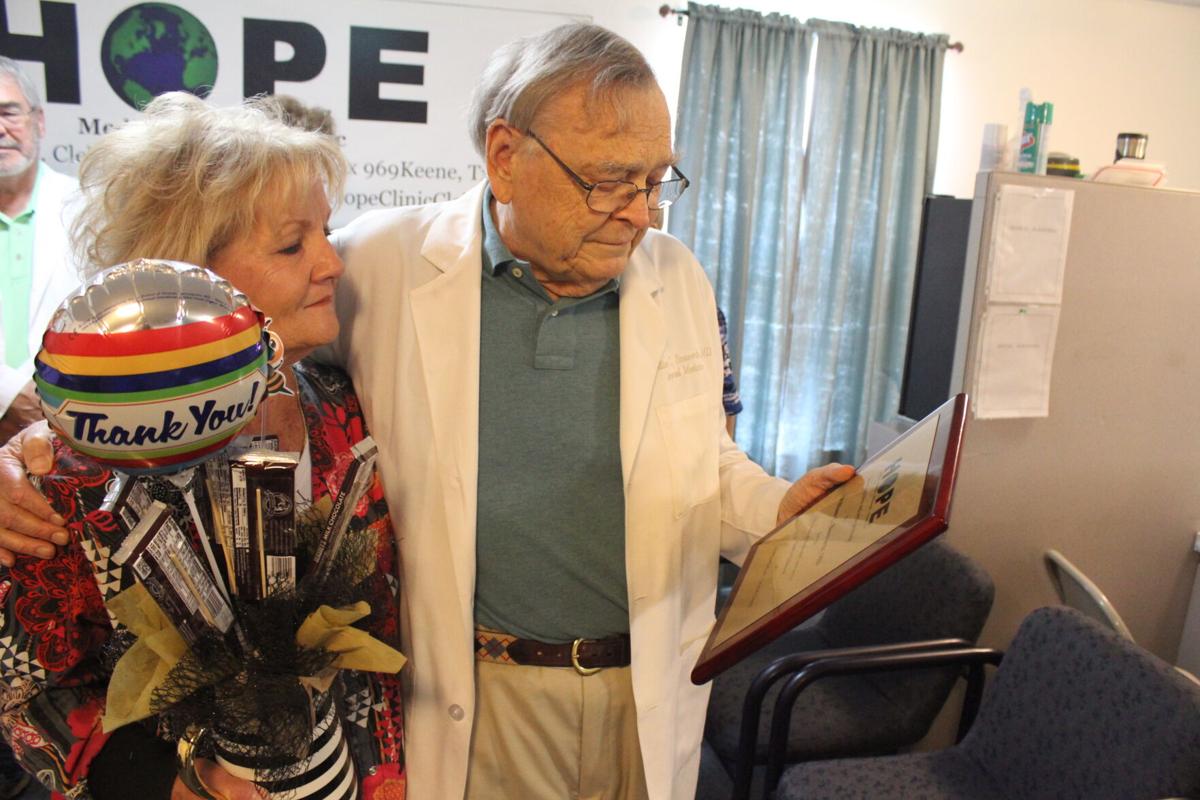 “It just seemed like a good idea,” Dr. William Bosworth replied with a laugh when asked why he decided to apply for medical school more than 60 years ago. “When I was in second grade my handwriting teacher looked at my writing and said, ‘You know, that’s so bad. Maybe you ought to consider a career in medicine.’

“But I don’t know. We didn’t have any other doctors in my family.”

“Absolutely,” Bosworth said. “I wouldn’t have wanted to do anything else. I can’t think of a better career.”

Bosworth, although he retired from private practice about 12 years ago, has for the past 11 years volunteered at Cleburne’s HOPE Medical & Dental Clinic. The clinic, founded by Dr. Tony Torres, offers medical and dental care to uninsured county residents who would otherwise be unable to obtain care.

HOPE Clinic Executive Director Diane Westcott joined staff members mid-day Wednesday to honor Bosworth on his last day at the clinic and present him with a plaque of appreciation and a bouquet of Hershey’s chocolate bars.

“Dr. Bosworth has been such a big part of the foundation of HOPE Clinic,” Westcott said. “We’re going to miss him greatly. I always say Dr. Westcott and our other doctors have missionary hearts, and that’s what keeps them coming here. Because they don’t have to do this. But Dr. Bosworth has been a staple of this clinic every week, sometimes twice a week for the past 11 years.

Bosworth’s contribution to the clinic and its patients can’t be overstated, Torres said.

“He’s brought so much compassion in addition to a lot of wisdom and integrity,” Torres said. “On top of that, Dr. Bosworth is truly a man of integrity. Like Diane said, he didn’t have to volunteer here. But the fact that he has and through his compassion and large heart, Dr. Bosworth has had a huge influence on the clinic. He’s loved by our patients and respected by our staff.”

A U.S. Navy veteran, Bosworth graduated from the University of Oklahoma College of Medicine.

Bosworth, during Wednesday’s short ceremony, pointed out that OU wins more than the University of Texas at Austin.

While a senior in medical school, Bosworth met his wife to be, Diana Bosworth, who was working as a medical technician at the time. The couple moved to Cleburne in 1979 where Bosworth maintained his practice first on Kilpatrick Street and later on Nolan River Road.

It’s always been about the patients, Diana Bosworth said of her husband.

“What’s impressed me through the years is his true compassion for people,” Diana Bosworth said. “He loved his patients as people and not simply because of their medical issues. It always amazed me about his patients, just their lives in general. He really got to know them.”

Diana Bosworth said her husband’s decision to volunteer at HOPE Clinic after he retired from private practice came as no surprise.

“Bill wanted to stay involved after retirement,” Diana Bosworth said. “And he’s always been that way, wanting to do what he can to help people. He’s always been a very dedicated physician and one of the most ethical people I’ve ever known. He has an understanding of people that’s rare and I think that’s made him a better physician.”

Torres agreed and reiterated that Bosworth made a difference at the clinic.

“He fit right in,” Torres said. “Because the doctors who volunteer here, including Dr. Bosworth, for them it’s about a sense of doing good and going above and beyond. Because when someone’s giving their time without pay, well, it’s that missionary spirit again, it’s something that truly comes from the heart.

“And that, because of Dr. Bosworth and our other doctors and volunteers, that’s what makes HOPE Clinic unique. And it’s what makes a difference in the lives of our patients. A lot of medical clinics, the doctors have to work on a quota. Here they have the time do develop relationships and rapport with the patients, and that makes a huge difference.”

The Bosworths also raised four sons born within a 6-year span, something both referred to as an adventure.

“I don’t know what they were thinking having four boys in a row like that,” their eldest son Bill Bosworth joked. Bill Bosworth serves as the 413th District Judge.

Of the other sons, Brian Bosworth is an artist, Bob Bosworth a dentist and Bruce Bosworth a retired career Naval officer.

“Dad’s always been a bright star in my life,” Bill Bosworth said. “He’s definitely been a big example to my brothers and me. What’s always amazed me is just how much dad knows about medicine and the human body and so many other things.”

Bosworth said he’s proud of the difference his father has made.

“Dad’s kind of an old-school doctor,” Bosworth said. “With younger doctors a lot of times they throw a lot of tests and scans at the patient right away. There’s a place for that certainly. But dad’s always been more on making a diagnosis by listening and talking to his patients first, getting to know them. He touched a lot of lives I know because I still meet people all the time who were patients of him and share their stories.”

Bosworth joked that, growing up with three brothers, having a doctor as a father came in handy.

“He always had his suture kit with him,” Bosworth said. “And he regularly would stitch my brothers and me back together. I remember getting sewn up on the tailgate of our station wagon, on the washing machine.”

“When we were growing up he was a very patient, loving father who took care of us, but also had expectations,” Bosworth said. “My decision to enter the Navy was initially sparked when I was young because dad had a plaque that read Lt. Commander Bosworth. That’s what first inspired me to go that route and I was fortunate enough to receive an appointment to the U.S. Naval Academy and serve 22 years in the Navy. Looking back on that now, what makes me proud of my father is his service as a doctor in the Navy and later through private practice and just his example of always trying to serve his community.”

Bob Bosworth, now a dentist in San Diego, also followed his father’s footsteps into the Navy.

“Just very proud of my dad and thinking of the good example he and my mom set as a married couple and as parents to my brothers and me,” Bosworth said. “Dad just always strived to do the right thing everyday and supported us while we were growing up. He also pushed the importance of education and made it a strong priority.”

Those traits of his father came in handy, Bosworth said, when he was considering applying to dental school.

“I remember telling my dad that I wasn’t sure because it takes so long to get through dental school,” Bosworth said. “At least it seems like a long time when you’re young. My dad just said, ‘Looking backwards it’s nothing. Just do it.’ Which turned out to be good advice, and true.”

In addition to being a good doctor, his dad had a way with a lawn mower, Bill Bosworth said.

“Growing up, my brothers and me each had a section of grass we were responsible for cutting,” Bosworth said. “Four sections: the front, back and both sides of the house. The problem was, we’d never mow all four on the same day. So part of the yard would always be cut while another part would be needing to be cut and another part like a foot tall. And we’d always argue about what section was whose. So my poor dad. It was probably 20 years before he finally got a yard service and had his whole yard evenly cut.

“But also, the lawn mower we had would never start at least not until my dad got home. We’d pull and pull on the cord and nothing. Dad would get home, ask why the grass hadn’t been cut and we’d tell him the lawn mower won’t start. He’d walk over, pull the cord once and it always started right up.”

HOPE Clinic staff members on Wednesday suggested a laundry list of activities ranging from gardening to hiking to horseback riding for Dr. Bosworth’s consideration now that he’s retired both from private practice and volunteering at the clinic.

Diana Bosworth said she and her husband are simply looking forward to spending “some happy time together” at home for now.

“I know we’re both looking forward to going out to eat once this pandemic is over,” Diana Bosworth said.

Dr. Bosworth replied “end of the month” after Westcott asked when his current medical license expires.

“So, you want to go ahead and work for us over the weekend?” Westcott said.