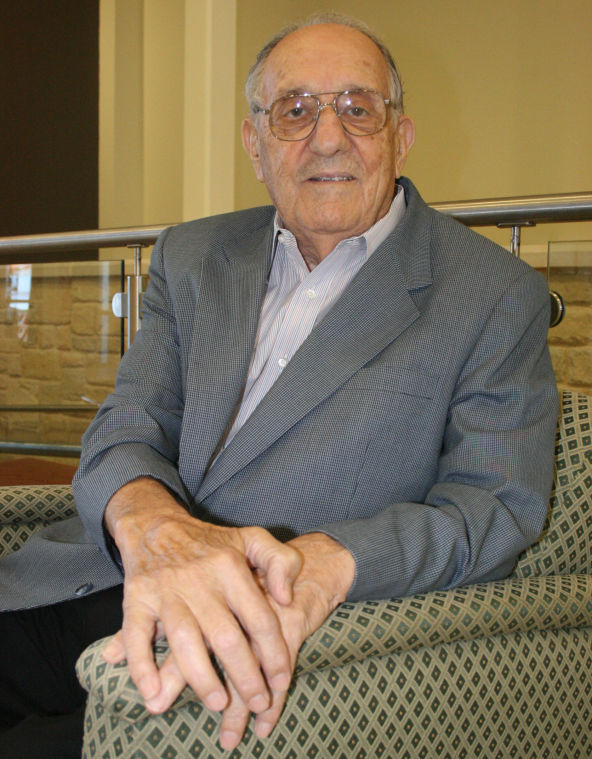 George Marti is the 2010 Times-Review Man of the Year. 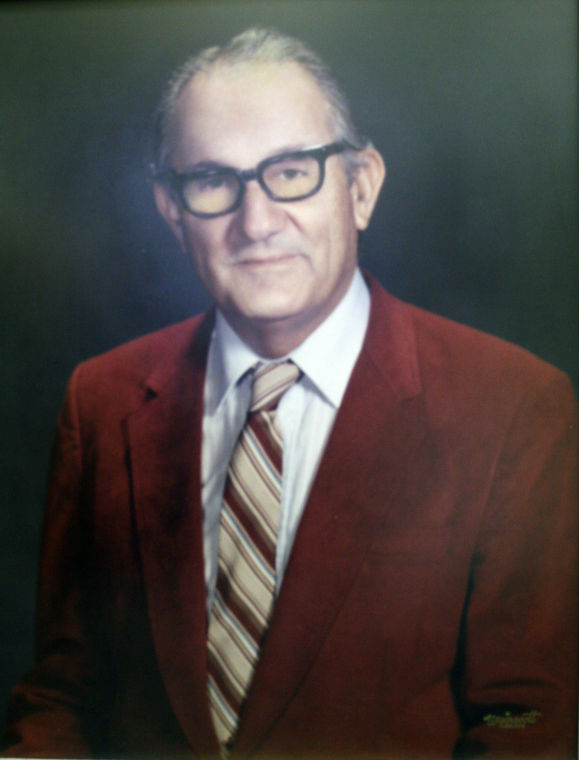 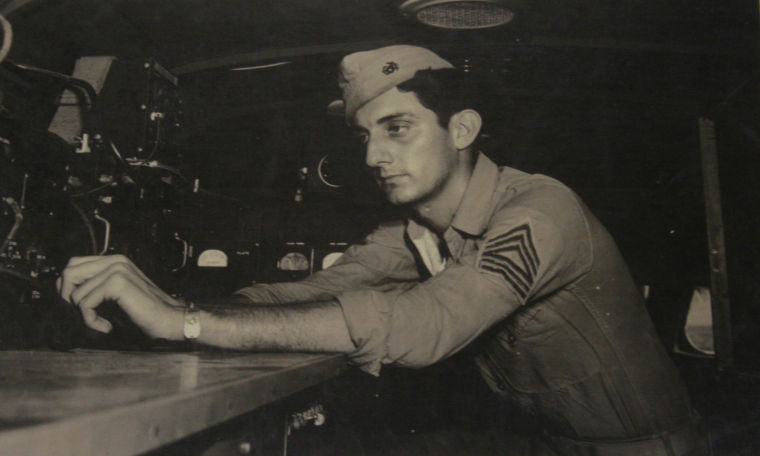 George Marti pictured in 1944 working in the Southwest Pacific. 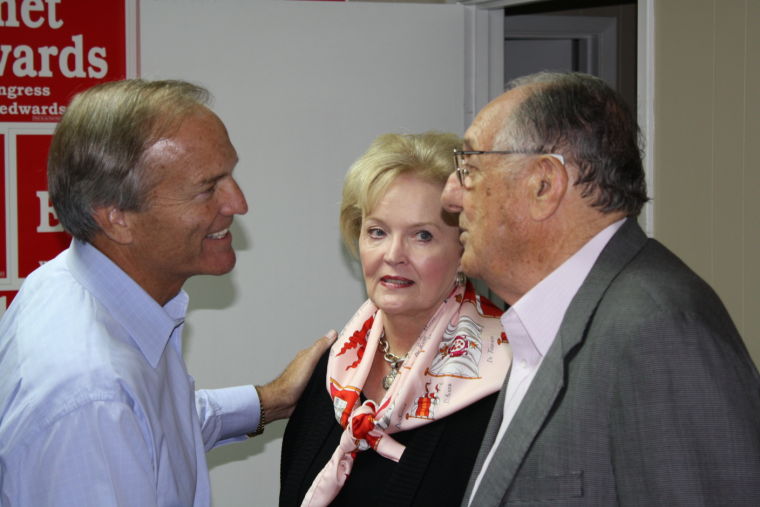 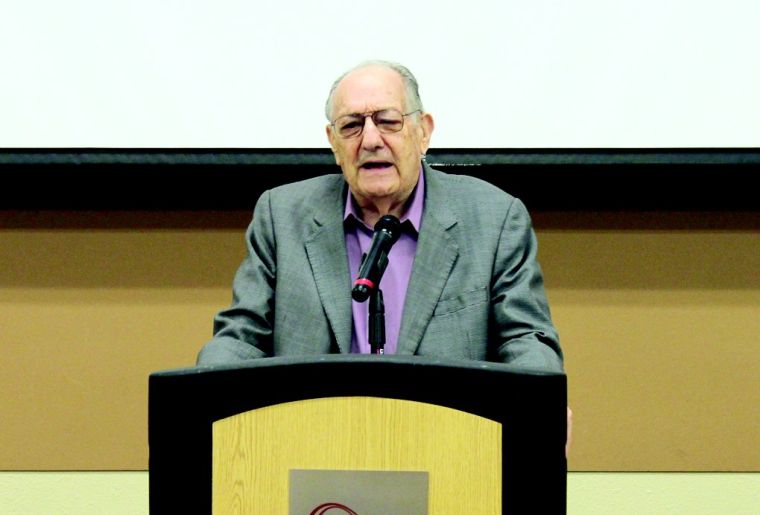 George Marti accepts the Silver Eagle award at the annual Boy Scouts Sante Fe District Friends of Scouting Breakfast. He told the group of Scouters and community members about his life experiences and his love for helping his community. 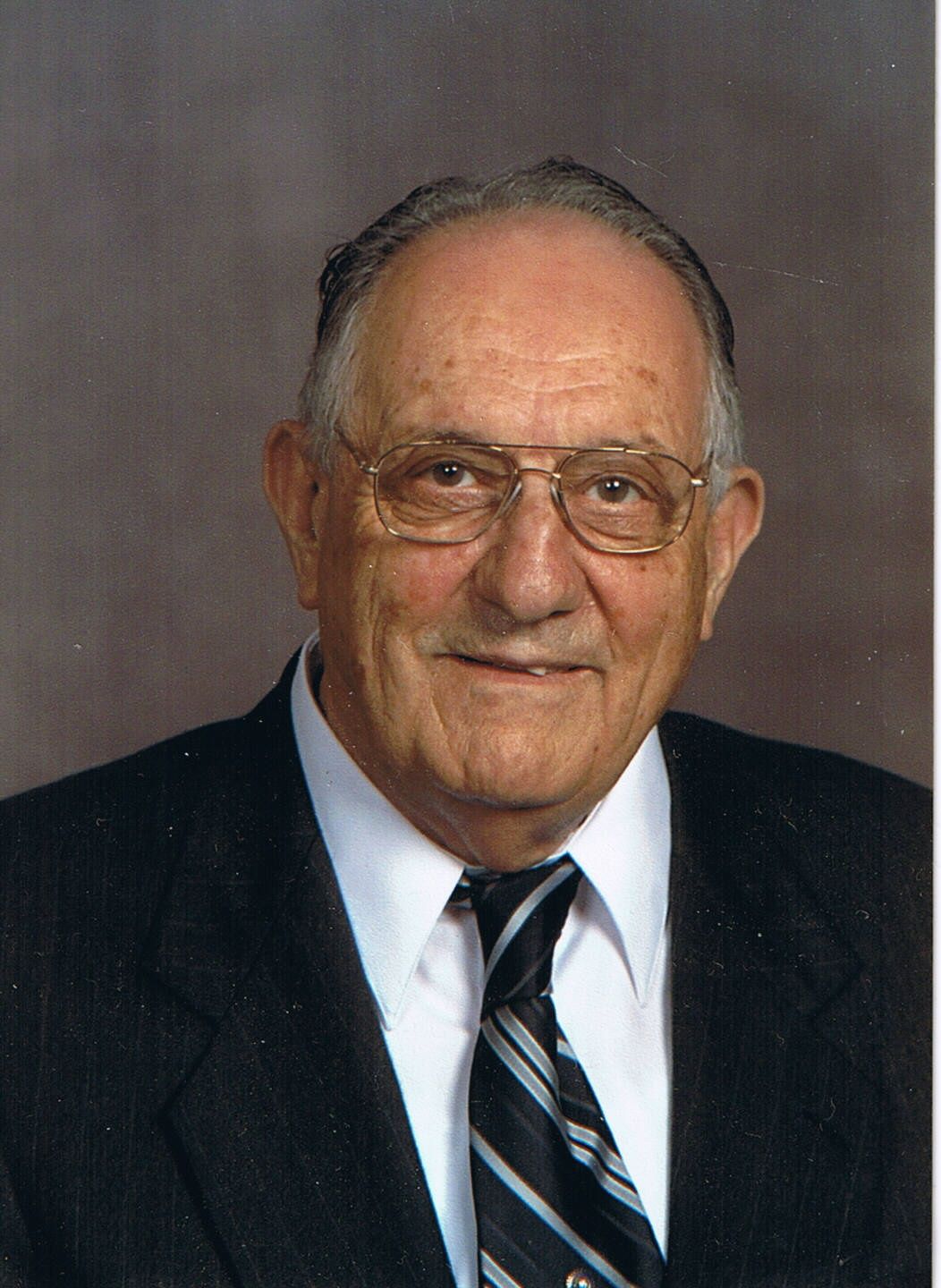 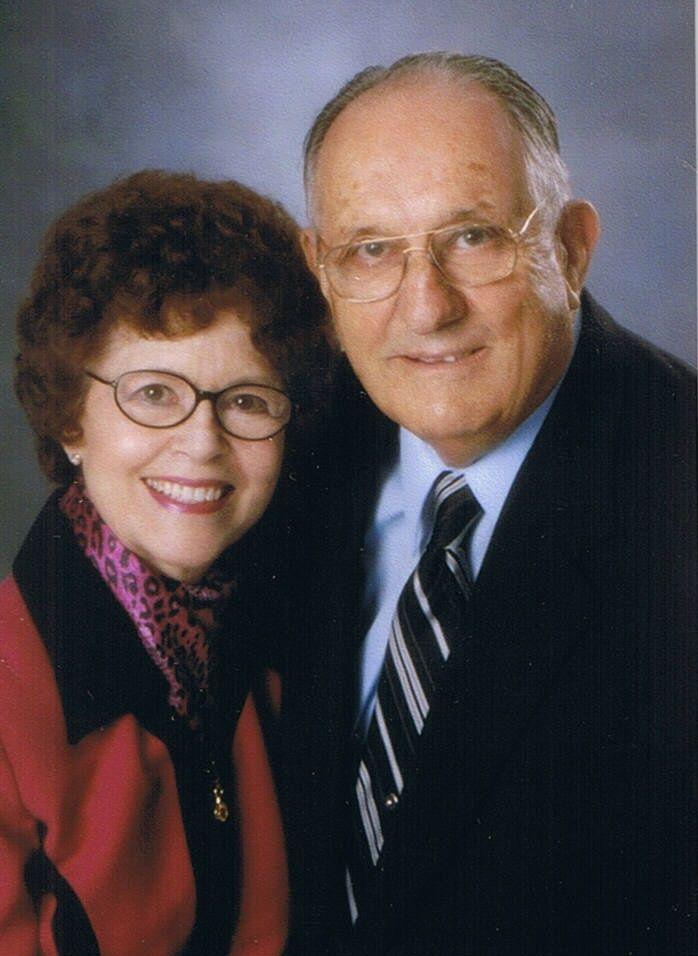 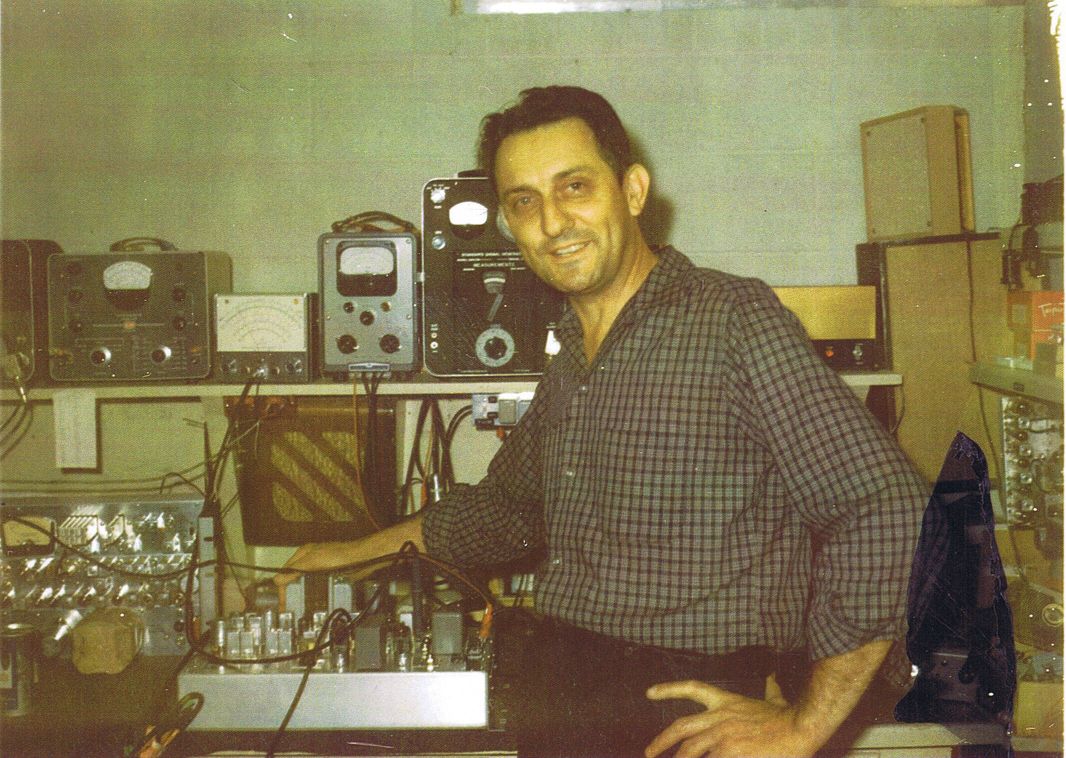 George Marti is the 2010 Times-Review Man of the Year.

George Marti pictured in 1944 working in the Southwest Pacific.

George Marti accepts the Silver Eagle award at the annual Boy Scouts Sante Fe District Friends of Scouting Breakfast. He told the group of Scouters and community members about his life experiences and his love for helping his community.

Friends and family members on Monday remembered former Cleburne Mayor George Marti as a giant whose influence reverberated throughout Cleburne and far beyond throughout his life. Marti passed away Sunday. He was 95. Marti served as Cleburne’s mayor from 1974-86, the city’s longest serving mayor.

Born 1920 in the Oak Grove community near Fort Worth, Marti’s accomplishments began long before his tenure as mayor and continued well after.

Those who knew Marti were quick to credit his many accomplishments but more so stressed the impact he made on so many.

“George did so much that I don’t really know where to begin or end,” Cleburne resident Elizabeth Victory said.

“We’ve lost a giant in our community, a great leader and it’s going to be hard to fill his shoes,” James said. “He was a friend and I’ve worked with him on many, many projects through the years and I’m going to miss him greatly.”

Marti’s daughter, Michelle Marti, said her father remained active in the community through his final days.

“Here’s something most people don’t know,” Michelle Marti said. “Dad became a Meals-On-Wheels [of Johnson and Ellis Counties] volunteer in August and was out delivering meals on Wednesday. I was just looking at his calendar and realized he had 11 meetings in one week in November and thought that’s really something. Dad was proud of his service in the Marines and believed in education. He really made a big mark on the world and I’m proud of him.”

“George did an awful lot for the area and community and had the right heart and idea in that respect,” Smith said. “His thinking and actions in those respects,  I  think,  got a lot of others in the community thinking and inspired them to do what they could to help out too.  But boy, we lost a good one yesterday.”

Former Cleburne Mayor Tom Hazlewood called Marti the best mayor Cleburne ever had. Hazlewood, who first met Marti when he was 16 and a student at Paschal High School, also called Marti a friend and an inspiration.

Cleburne resident Joel Victory, who came to Cleburne to work as the city’s finance director when Marti was first elected mayor, said the city was in poor financial shape when Marti first took office but that through his leadership he and the council and city staff managed to turn the city around.

“George’s word was always good and you could always trust him,” Hazlewood said. “He was a leader and if something needed to be done he did it. He was also a friend of mine for a long time and he’s going to be missed.”

Marti was also the longest tenured Cleburne Rotary Club member, through which he and Smith provided numerous scholarships to Johnson County students.

Marti graduated from Central High School, now Paschal High School, when he was 16 in 1936 and landed a full-time job as a transmitter engineer in 1938 at KFJZ.

During World War II, Marti enlisted as a Marine serving in Marine Air Group 13. After two days of boot camp he was sent to tech school in Washington, D.C., to learn the basics of the then relatively new technology radar. Marti graduated from that, the first radar school, No. 1 in his class of 120 students.

Marti went on to serve in the Pacific during the war installing communications equipment from the Somoas to the Marshall Islands among other duties.

Shortly after returning home, Marti founded KCLE AM in Cleburne and later Marti Electronics. One of his inventions, which facilitated off-site radio broadcasting now sits in the Smithsonian Institute.

“For that he’s known not only in Cleburne but around the world,” Elizabeth Victory said. “We’ve run into people around the world who knew of him because of the Marti, which is pretty amazing when you realize that came out of Cleburne.”

From banking to cattle to other business endeavors Marti realized much success through life but will likely best be remembered for the Marti Foundation through which hundreds of area students received scholarships.

Hazlewood said, in a 2010 Times-Review article in which Marti was named Man of the Year, that in addition to Hill College, which Marti worked with James to bring to Cleburne, Marti Foundation scholarship money has helped students go on to Texas Christian University, Baylor University, Texas Tech University and numerous other schools in addition to law and medical schools.

“Education was important to George,” Hazlewood said. “That’s his real legacy and it’s a legacy that will continue on now that he’s gone.”

In 2005, Cleburne ISD named the Marti Elementary School in honor of Marti’s contributions to the community and support of Cleburne High School graduates in establishment of the Marti Scholar program.

“Cleburne has lost a major icon, friend and family member today,” Superintendent Dr. Kyle Heath said. “Our heartfelt sympathy and prayers are extended to the family.

“Mr. Marti served our community in so many, many ways as a statesman, philanthropist, and business and civic leader. Words can’t begin to describe the impact he, and the late Jo Marti, had on thousands of students’ lives in making their dreams of a college education come true. We are so proud to have a Cleburne ISD campus named in their honor, in recognition of all the contributions they made to our community. His name will live on in the students and achievements of Marti Elementary School.”

“Our hearts are saddened today,” Marti Elementary Principal Mary Boedeker said. “Our campus and community have lost a great man. Through the years, Mr. Marti and his family have been an integral part of the Marti Elementary School landscape. His genuine passion for education and for people has touched us all. He will be greatly missed, but his legacy will go on.”

CISD Trustee Donna Boles was president when the decision was made to name the elementary campus.

“Mr. Marti valued education and showed that value by his generosity to Cleburne ISD,” Boles said. “The number of students he helped through the years are examples of his strong belief in education and young people. So many students were able to continue on to college because of the Marti Scholarship Foundation. And many became starts in their profession and walks of life because of his concern and generosity. We were so blessed to have known him. His legacy will far extend the number of years we had with him. We were so fortunate to have had him in our lives.”

Marti, in the 2010 article, explained his reasons for giving back and the scholarships.

“It’s very simple,” Marti said. “I came to this town in 1947 and put KCLE on the air. If people hadn’t bought the products and services I advertised I never would have made it. This is a thank you for what the people did for me. It boils down to this, I believe in helping people.”

“He was one of the most generous men I could ever remember having the pleasure to know,” Goodwin said. “What he did with our livestock association and the money he gave us to make sure we could give out scholarships for years and years to come is just unheard of. He had a heart of gold and that is a rare quality to find in people these days.”

“I recall a story that he told me often,” Cain said. “During his time as mayor the city had fallen upon hard times and he had to personally guarantee payroll to see that the employees were paid.

“It is a sad day in Cleburne and it’s important for all of us to pause and reflect upon what a blessing it was to have such a great leader in our community for a long time.”