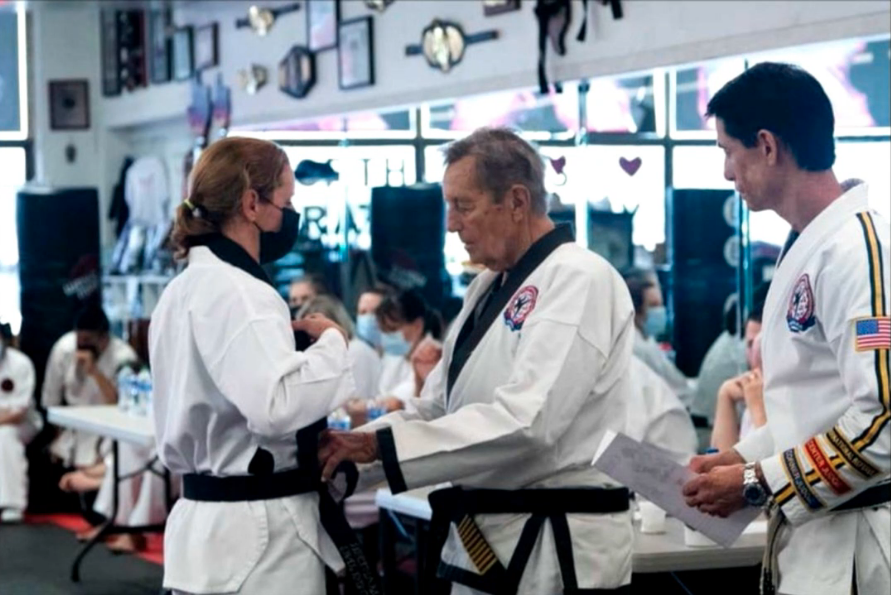 James Pat Burleson, center, who is known as “the father of karate,” passed away Sunday at the age of 85. 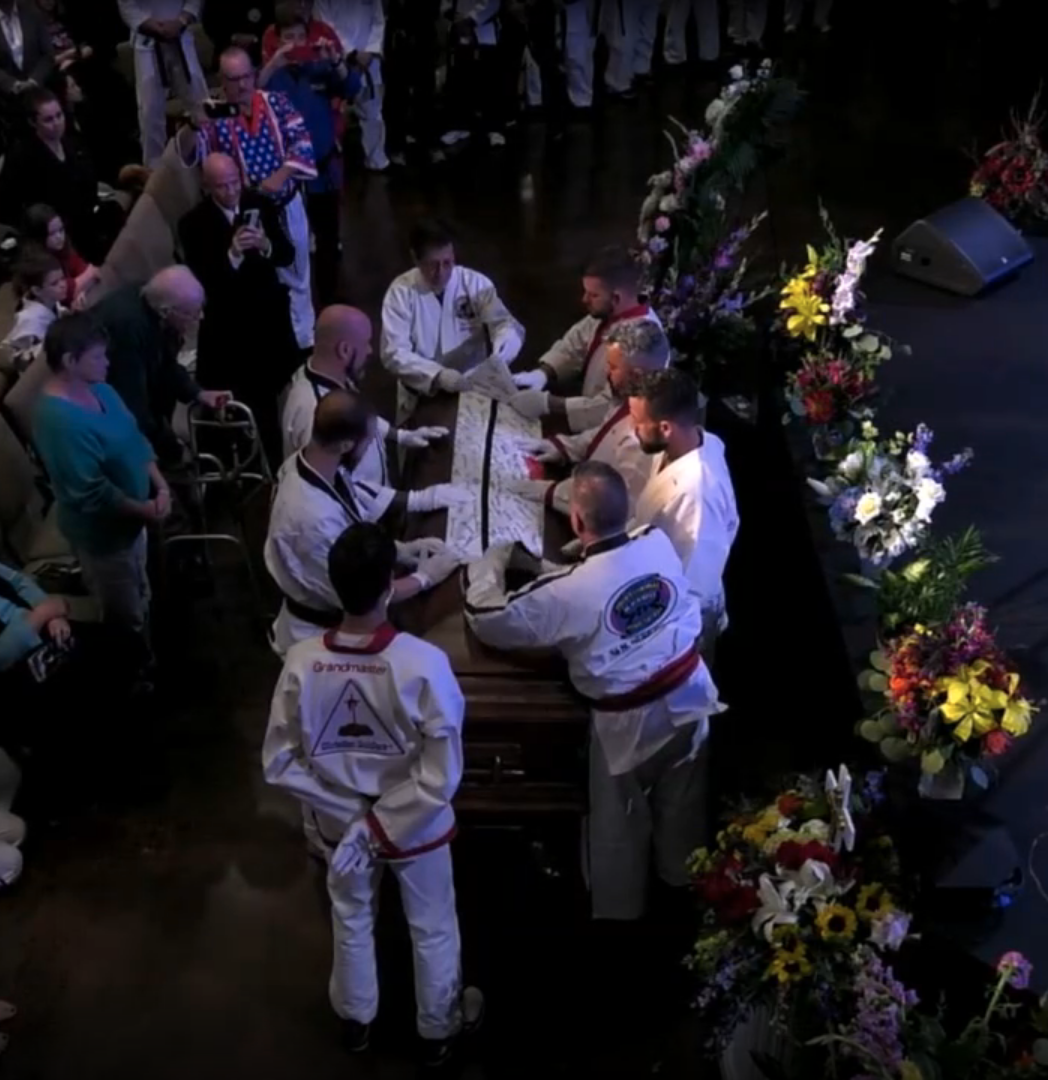 James Pat Burleson, center, who is known as “the father of karate,” passed away Sunday at the age of 85.

A crowd filled the auditorium of OpenDoor Church in Burleson on Wednesday to commemorate Grand Master James Pat Burleson, who passed away Sunday at the age of 85.

Burleson was an unstoppable force in open tournament fighting, according to Black Belt Mag, and was a pioneer in the popularization of martial arts in America.

“It was said he was much more than martial arts, but I see today martial arts,” Jamie Cashion said as he opened the service.

The audience was filled with students who had trained under Burleson, many of whom have become masters themselves.

“I want to thank everyone for coming here and showing so much love for Pat and it’s easy to do for him,” Burleson’s wife, Annie, said. “That’s why it was easy to care for him all these years. It was such a pleasure and a joy. I’m standing up here with the strength of Jesus because there’s no other way I could be doing this.

“I want you guys to know that even during this difficult time I managed to find joy and peace with the whole process, which is amazing. And that only told me that Jesus was right here within all of us. That’s really an awesome thing.”

Pat Burleson won the first U.S. Karate Championship in 1964, and he also became the Texas State Champion in fighting. He was aptly nicknamed the “father of all karate championships.”

He was the second highest ranked belt in Tae Kwon Do behind Great Grand Master Jhoon Rhee, who brought and popularized Tae Kwon Do to the United States. Burleson first trained Tang Soo Do in Japan in the 1950s.

“The word ‘icon’ is over-used in today’s lexicon but is right and proper when applied to Master Burleson,” said Grand Master John Worley, co-founder of The National Karate Academy of Martial Arts. “He was a true American martial arts pioneer and icon.

“He, along with his life-time friend and fellow pioneer, Allen Steen, set martial arts standards in Texas that are still being observed today. My long-time partner in the National Karate school organization, Larry Carnahan and I, along with Pat Worley and Gordon Franks have been honored to have been promoted in rank by Master Burleson.”

OpenDoor Church Pastor Troy Brewer spoke of Burleson’s faith that got him through the past couple of years.

“I remember going, ‘Wow, I can’t believe I’m meeting this guy,’” he said. “I kind of fan boy sometimes and just being in the room with him was very impressive to me. Just like someone who gave a testimony earlier, I knew a lot of his exploits. I knew a lot of things he’d done. I know what a tremendous difference he’s made and how he’s literally affected the planet Earth.

“And then he was a sweet guy. When he was around me, all he wanted to talk about was King Jesus. I’ve had great privilege of praying with Mr. Burleson over and over again.”

Burleson’s achievements in martial arts led him to the film industry in which he had appeared as a stunt actor in many episodes of “Walker Texas Ranger” alongside Chuck Norris.

Norris shared his condolences via a video during the service.

“Dear Annie and family, Gina and I send our love and prayers to you all during this difficult time with the passing of Pat,” he said. “I have so many fond memories of Pat that we made over the years. Not only was he one of the world’s greatest martial artists, but one of the finest men I’ve ever known. He had a heart as big as Texas and cared for everyone he knew. Pat will be missed and never forgotten. And Annie, Gina and I love you and your family. Take care and God bless you.”

Burleson went on to open one of the first Karate schools in America — J. Pat Burleson Martial Arts in Saginaw.

Cleburne resident Guy James is an ninth-degree black belt and trained under Burleson, who promoted him last in 2019.

“It’s an honor to be part of Mr. Burleson’s honor guard today,” James said Wednesday morning. “He is a legend and a legacy leader and a friend to people all over the world. There’s no telling how many martial artists he’s influenced or the number of black belts under his lineage.”

In 2002, Burleson was inducted into the United States Martial Arts Hall of Fame.

“The United States Martial Arts Hall of Fame mourns the passing of GM Pat Burleson,” reads a post on the USMA Hall of Fame Facebook page. “Our thoughts and prayers are with his family and the incredible number of school owners, instructors and students he influenced over a long and distinguished career as a martial arts influencer. We honor his lineage and his legacy, and we remember him with great respect and distinction.”

“I showed this prototype to Pat two years ago,” Minshew said. “And along came this pandemic that scared everybody and we couldn’t do this. This banner is made out of 100 percent authentic martial art uniform material. Obviously the black belt goes all the way around and the iconic American flag. Pat Burleson is the first recipient of it. I wanted him to be the last but it didn’t work out.”