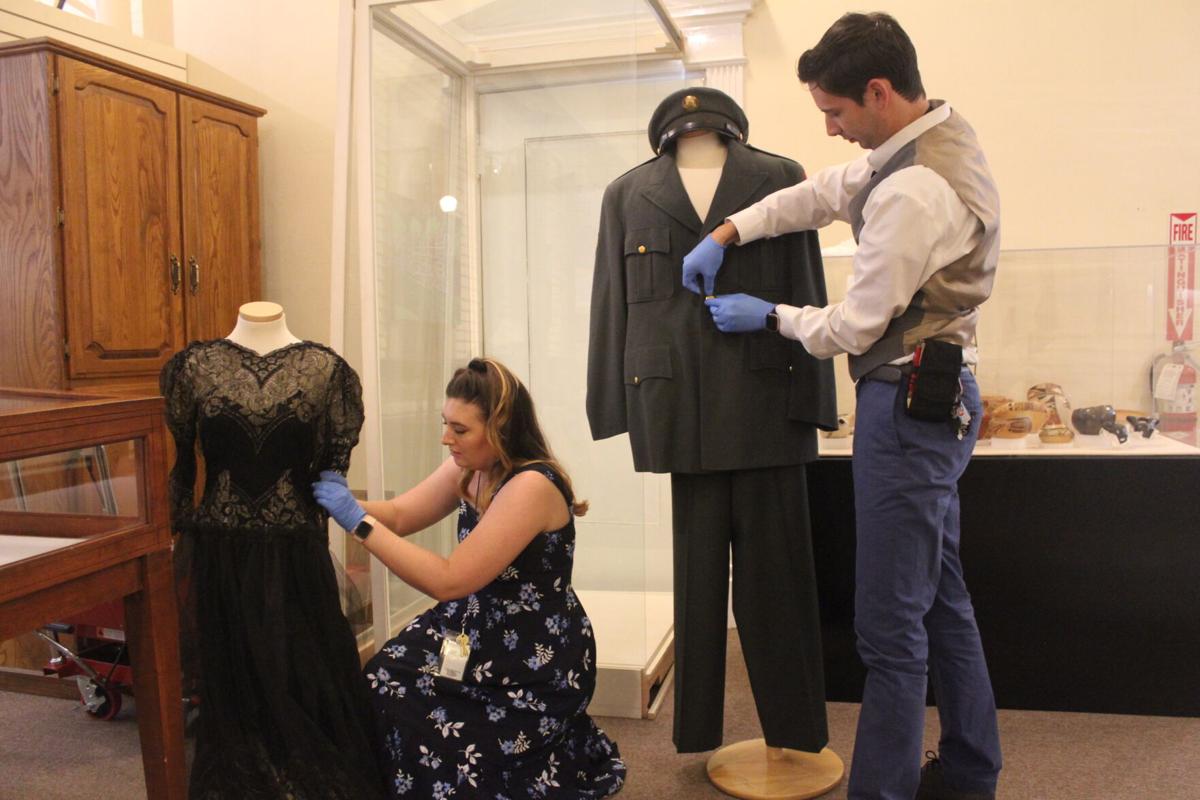 Layland Museum Educator Priscilla Schubert, left, works on a 1930s dress while Layland Museum Assistant Nicholas Hefner works on a Korean War era military uniform both of which were donated to the museum. 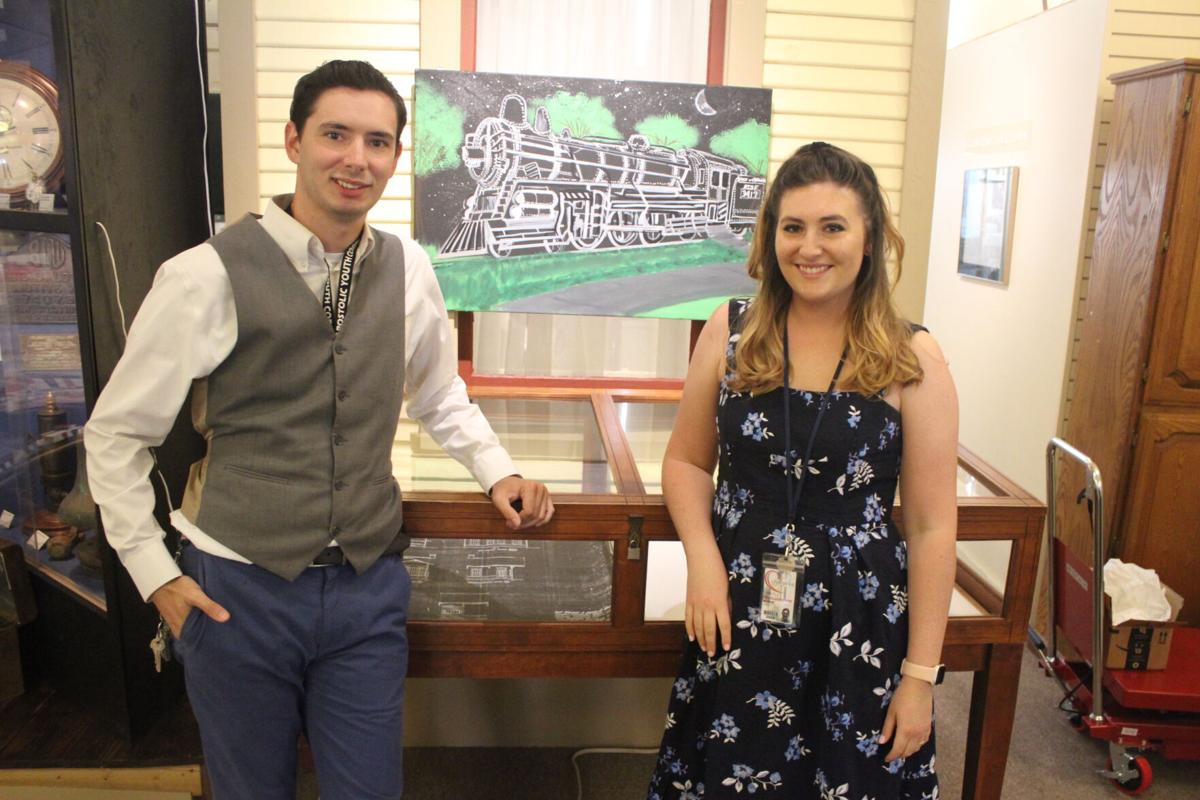 Layland Museum Assistant Nicholas Hefner and Layland Educator Priscilla Schubert pose in front of a painting of Cleburne’s iconic Engine 3417. The painting is one of several items included in the museum’s “On The Right Track” free exhibit, which will remain until renovation of the Cleburne Railroad Museum completes later this year.

Layland Museum Educator Priscilla Schubert, left, works on a 1930s dress while Layland Museum Assistant Nicholas Hefner works on a Korean War era military uniform both of which were donated to the museum.

Layland Museum Assistant Nicholas Hefner and Layland Educator Priscilla Schubert pose in front of a painting of Cleburne’s iconic Engine 3417. The painting is one of several items included in the museum’s “On The Right Track” free exhibit, which will remain until renovation of the Cleburne Railroad Museum completes later this year.

Chief among those is the arrival of two new faces.

Nicholas Hefner, previously involved with renovation of the Cleburne Railroad Museum, has been promoted to museum assistant, a position that covers both Layland and the Railroad Museum.

“As museum assistant I now, instead of just doing the railroad aspect, help with Layland operations too, help with finances, event coordination,” Hefner said. “Basically help Stephanie with whatever she’s working on and whatever needs doing”

“It’s my job to create programs to connect the community to the museum and the artifacts here,” Schubert said. That includes planning out our calendar and events we’re going to host as well as working with other city departments and downtown businesses to come up with events and activities for everyone from kids through adults. We want everyone to come in and check out all the great things we offer here.”

Hefner credits his love of all things railroad to his father.

“My dad and I went around the country chasing trains,” Hefner said. “He’s a model railroader so I got into that through him and I have a lot of Lego trains. I’ve always had a fascination with railroads and history, and helping with the [Cleburne Railroad Museum] gave me a reason to dive into it as more than a hobby.”

“Something I loved as a young person was the TV show “Mysteries at the Museum,”” Hefner said. “It fascinates me how artifacts, sometimes little artifacts, can tell some of the biggest stories and hold so much significance. That’s something I love about museums, that the exhibits and objects hold such huge stories.”

Schubert previously taught history and other subjects at the middle and high school levels.

“I discovered my love of history in high school and have been passionate about it since, specifically American history,” Schubert said. “My husband’s family is from Cleburne so I was very excited to see the educator’s position open here and very happy to be here.”

Schubert said she looks forward to diving into the local history of Cleburne and Johnson County.

“I like the variety Cleburne offers,” Schubert said. “You have Civil War history going on to World War I, World War II and so many other aspects. I like that the Layland is not limited, that is encompasses so much.”

Schubert, Hefner joked, has probably learned more about railroad history during her first month and a half on the job than she probably imagined she would ever know.

The recent months have been a learning experience for Hefner as well.

“I knew a lot about the railroad aspects of Cleburne but not so much about other sides of Cleburne’s history,” Hefner said. “So those have been a lot of fun to learn about. That’s what I love about this job is that everyday is different. Everyday working here I learn something new or I’m trying something new.”

Montero said she’s delighted to have both on board.

“Absolutely thrilled to have them both here especially as we’re gearing up with having recently reopened and with so many projects upcoming. Nick and Priscilla have both brought so much energy and already gelled as a great team. They’re both smart and creative and I’m really looking forward to what they’re going to bring to the museum. They both love history and think it’s fun and I think their passion and energy is going to bring new synergy and dynamism.”

Library programs for now are largely in conjunction with the Cleburne Public Library and other city departments but area museum and history buffs are urged to hold on to their hats and prepare for the activity flurry on the way.

Renovation and expansion of the Railroad Museum has also occupied much of staff’s time.

“We’re getting there,” Hefner said. “We’re slowly starting to see the new museum take shape and emerge and to me that’s the exciting part, to see all these plans we’ve been discussing for so long finally starting to happen and become reality.”

The recent installation of new frontage signage to the Railroad Museum has residents excited as well, Montero added.

“Since those went up we’ve had a lot of calls people asking about the Railroad Museum and when it’s going to reopen,” Montero said. “Plus the new sign really makes the front of that building pop I think.”

No firm date has been announced but the Railroad Museum is scheduled to reopen later this year.

“We’ll have a grand opening, of course,” Montero said. “Another thing that’s hurt us is that we used the room in the former Railroad Museum building for a lot of our programs and activities. With renovations going on that space is obviously not available. The good news there is that, once renovations are completed, that room is going to have a full audiovisual setup, a camera that drops down, a sink area for arts and crafts activities, storage area for chairs and tables and more. It’s going to be really nice and its been designed to be used for programs for both Layland and the Railroad museum.”

For now, “On the Right Track” continues at Layland. The free exhibit includes railroad memorabilia from the former Railroad Museum along with several new additions.

“It’s been a popular exhibit and a good one for us too,” Montero said. “It’s allowed us to work and come up with ideas of how to plan the layout once the new Railroad Museum opens. That’s another reason I’m so happy to have Nick and Priscilla here. Soon we’ll reach the point of moving items from storage into the new museum and that’s going to be a gigantic job and I’m going to need a lot of help.

“One of the first things Priscilla’s working on is making a full program list before we have our grand opening for the Railroad Museum,” Montero said. “We want to be able to hand people that list while they’re at the grand opening and get word out of all the things we have coming up.”

“We’re excited about everything coming up, already working out a lot of plans for things to come,” Hefner said. “For now though, we’re just happy to be back open, back out in the community and we’re pumped.”

“Right now probably 90 percent of our time is tied up in the renovation,” Montero said. “It’s going well, but we’re all impatient. That’s okay though. Once it’s done we won’t remember that part. We’ll just be excited to have our new museum and all the wonderful things in it.

Wayne Bigham peacefully passed away, on October 17, 2021. He is survived by mother Mable Bigham, of Cleburne, Texas, his high school sweetheart and wife of 57 years, Judy, their daughter Laura Bigham Mayse, son-in-law Barry and granddaughters Lauren Ashley and Abbey Gail, all of Cecilton, Ma…