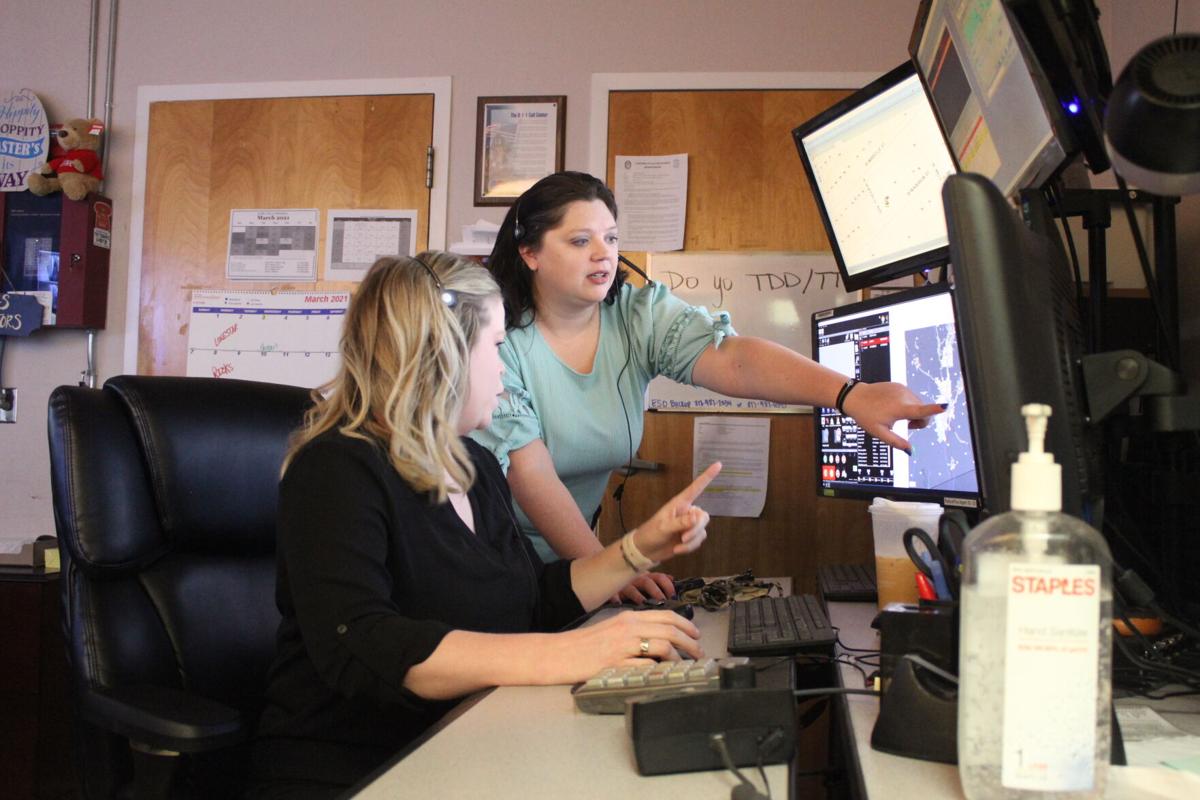 Cleburne Police Department Dispatch supervisors Holly Bicknell, left, and Valerie Hughes put in roughly 400 hours of overtime last year to ensure that calls continued to be answered throughout the COVID-19 pandemic. For those and other reasons both received NCT9-1-1’s Supervisor of the Year Award. 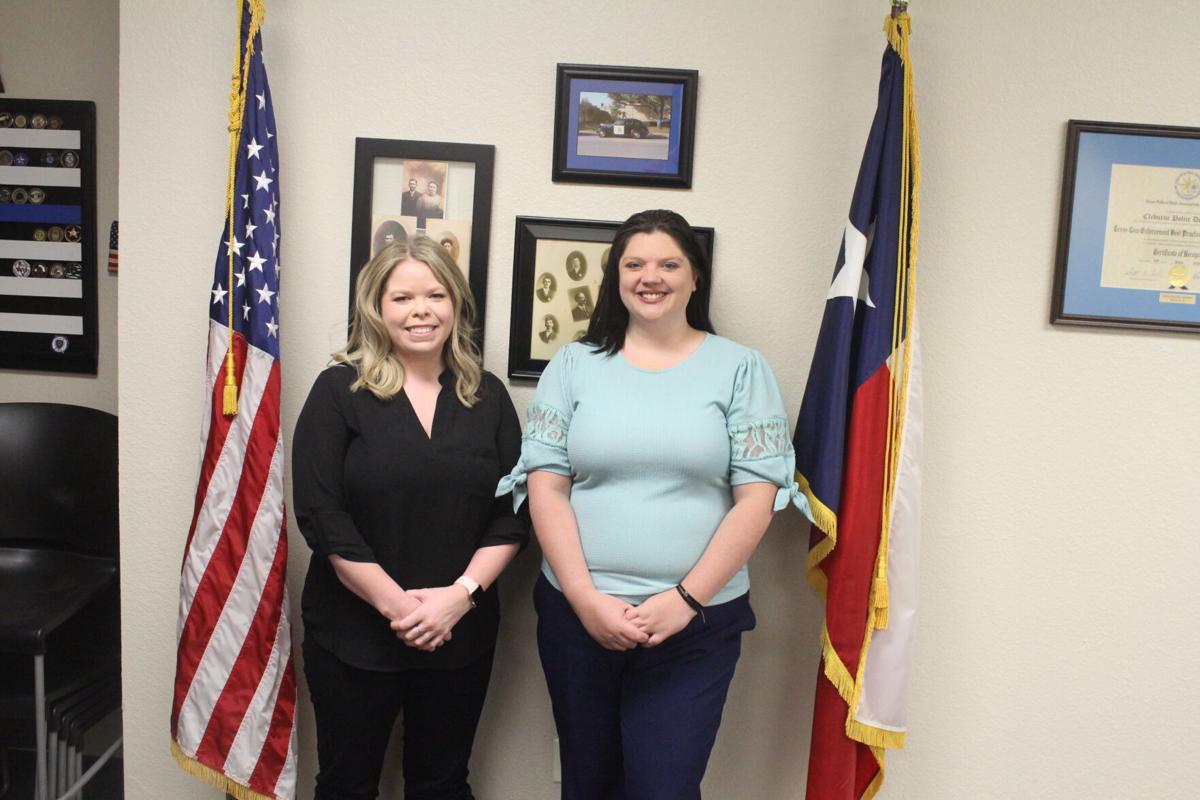 Cleburne Police Department Dispatch Supervisors Holly Bicknell, left, and Valerie Hughes are the first two to win an award in the same category in the 10-year history of NCT9-1-1’s annual awards ceremony. Both were named Supervisor of the Year.

Cleburne Police Department Dispatch supervisors Holly Bicknell, left, and Valerie Hughes put in roughly 400 hours of overtime last year to ensure that calls continued to be answered throughout the COVID-19 pandemic. For those and other reasons both received NCT9-1-1’s Supervisor of the Year Award.

Cleburne Police Department Dispatch Supervisors Holly Bicknell, left, and Valerie Hughes are the first two to win an award in the same category in the 10-year history of NCT9-1-1’s annual awards ceremony. Both were named Supervisor of the Year.

The North Central Texas Emergency Communications Districts, also known as NCT9-1-1, for the first time in its history of recognizing outstanding individuals and groups in the 9-1-1 industry announced two winners in one category. More specifically, the organization presented Holly Bicknell and Valerie Hughes, both of CPD, with NCT9-1-1’s Supervisor of the Year Award.

Bicknell and Hughes’ recognition adds an impressive feather to CPD’s cap as well.

“It’s really an honor,” Hughes said. “I’ve been here nine years and this is the first time [dispatch has] been nominated for any award from NCT9-1-1, let alone won one so this is a great feeling.”

Bicknell added that she’s work with the department for 10 years and is unaware of any other CPD dispatcher having been nominated or won, a claim CPD Assistant Chief Linn Goodman confirmed.

“We checked with NCT9-1-1 to make sure and they checked as far back and they could and they didn’t find anything,” Goodman said.

NCT9-1-1 serves a population of 1.7 million residents covering an area of more that 10,000 square miles.

The organization also gives awards each year to “individuals or groups who show an outstanding commitment to the 9-1-1 industry.

“We are proud to have so many dedicated professionals working with us to help save lives everyday,” according to NCT9-1-1’s release announcing this year’s award recipients. “The nominees are submitted by their PSAP supervisor or manager and the winners are selected by a majority vote from the supervisors, managers and NCT9-1-1 staff.”

Awards are given in six categories.

“The Supervisor of the Year Award demonstrates a positive and professional attitude toward all aspects of his or her roles and responsibilities,” according to NCT9-1-1’s release.

That includes familiarity with operations and functions carried out by subordinates, demonstration of such knowledge on a regular basis, monitoring of staff performance, creation of plans and objectives and other duties, according to the release.

Goodman, who oversees CPD communications in addition to other duties, submitted Bicknell and Hughes for consideration in this year’s awards.

That involves submission of a summary without the names of the individuals or groups nominated chronicling accomplishments of the person or persons submitted as well as the reasons the person submitting believes they are worthy of consideration, Bicknell said.

“Those summaries go to every PSAP in our region,” Bicknell said. “And from there everybody votes on them from supervisors to managers to NCT9-1-1 staff.”

“Last year was rough because of COVID-19, of course,” Goodman said. “But before that even because we experienced the unexpected passing of one of our dispatchers, which really hit the team and the department hard. We lost a couple of dispatchers from that but Holly and Valerie worked hard with our  team to help pull everyone through and rebuild.”

The couple also worked hard to make sure COVID-19 procedures and safety measures were followed in their department.

“We both had to relieve people at times, cover their shifts to make sure everything continued running,” Hughes said. “At one point we had to shut our whole dispatch down but fortunately the Johnson County Sheriff’s Office helped us through that.”

Goodman praised Bicknell and Hughes’ actions throughout that event.

“We had a COVID-19 scare and it looked like we were probably going to be down for about 72 hours,” Goodman said. “Fortunately, that ended up only being 36 hours and that’s because of the legwork Holly and Valerie did in setting things up for the county to help with dispatch while we were down. They also did a lot of work in finding rapid testing sites for times when our employees needed to be COVID-19 tested.”

It takes a team effort, Bicknell and Hughes said.

“We put in a lot of hard work this past year,” Hughes said. “We’ve had a lot of things occur that would probably break a lot of other agencies. But we were able to rebuild, restart and make this a better place and that’s because we have a lot of really great people we work with.”

“It was exhausting mentally and physically last year when we had to work so much overtime,” Bicknell said. “But we pulled through and pulled through it together.”

Bicknell began with the department in 2011 and Hughes in 2012. They were named co-supervisors of CPD’s Telecommunications Unit in 2019.

“Holly and Valerie exemplify what it means to be a 9-1-1 supervisor by demonstrating a positive and professional attitude toward their roles and responsibilities,” CPD Officer Kerri Abbott said. “Over the past year, Holly and Valerie have worked approximately 400 hours of overtime to ensure continued coverage of their department with very little personal time off.

“They are dedicated to the job, their co-workers and subordinates and the citizens of Cleburne. We are proud to have so many dedicated professionals working with us everyday to help save lives.”

Lt. Shane Wickson, who also oversees operation of CPD’s dispatch as part of his duties, agreed.

“We’re all extremely proud of Holly and Valerie,” Wickson said. “And that’s not just because of how hard they work and everything they’ve accomplished. It’s because telecommunications is an essential part of our team and their efforts drove the success of the entire police department.”

Cleburne Police Chief Rob Severance noted that the Texas Legislature last year recognized telecommunicators as first responders and went on to characterize the dispatch office as the “heartbeat” of CPD.

“Because whether it’s an emergency or non-emergency call they’re the first voice a caller hears when they call the police,” Severance said. “And from there they collect the caller’s information and pump it out to where it needs to go to ensure that our officers can get to that caller who needs help. Many times they’re also dealing with someone going through a crisis situation and that takes professionalism to deal with.

“As supervisors, Holly and Valerie have to ensure that quality control measures remain in place, look for ways to improve training and job performance and exhibit leadership. Both of them do that and more and we’re extremely proud of the work they do and very happy to see them recognized for their leadership.”

COVID-19 challenges and loss of co-workers aside, dispatch is a high-pressure, stressful job, Severance said.

“It is,” Hughes said. “But rewarding too because we’re there for people. We’re helping people. Even though we don’t physically respond to the calls we know that we’re getting help to people when they need it.”