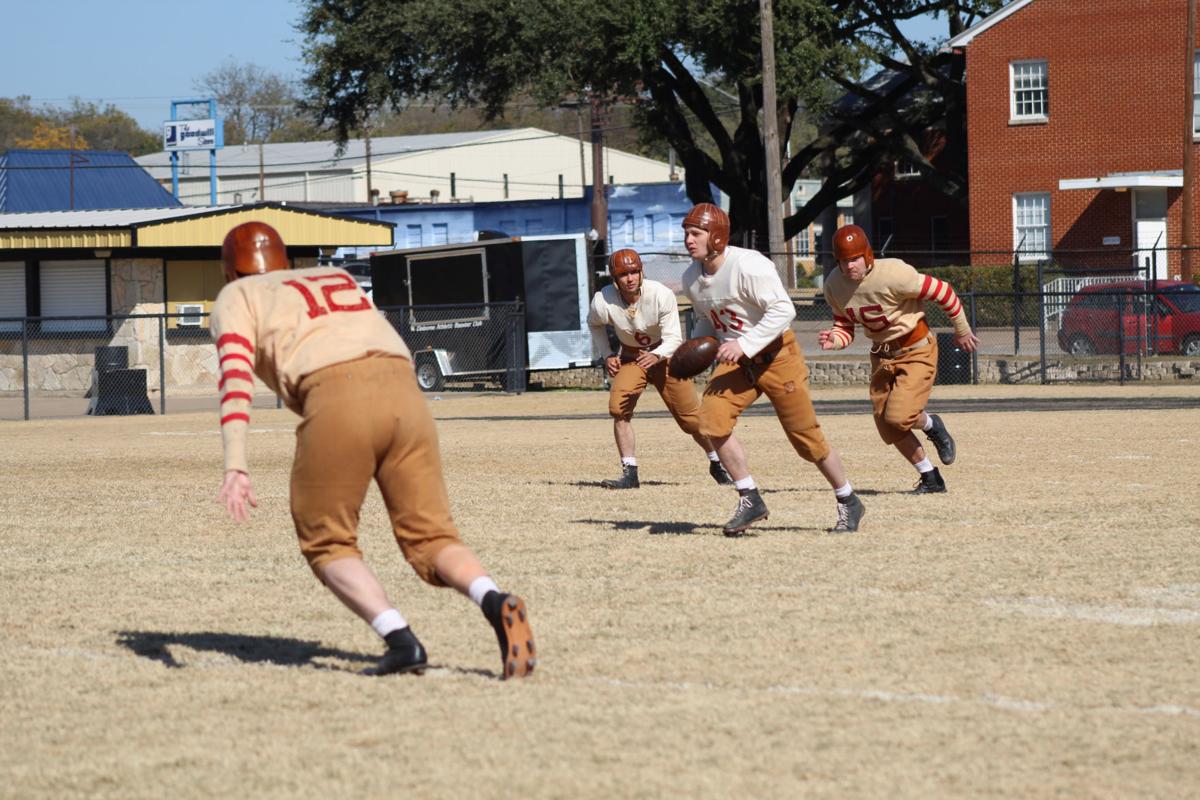 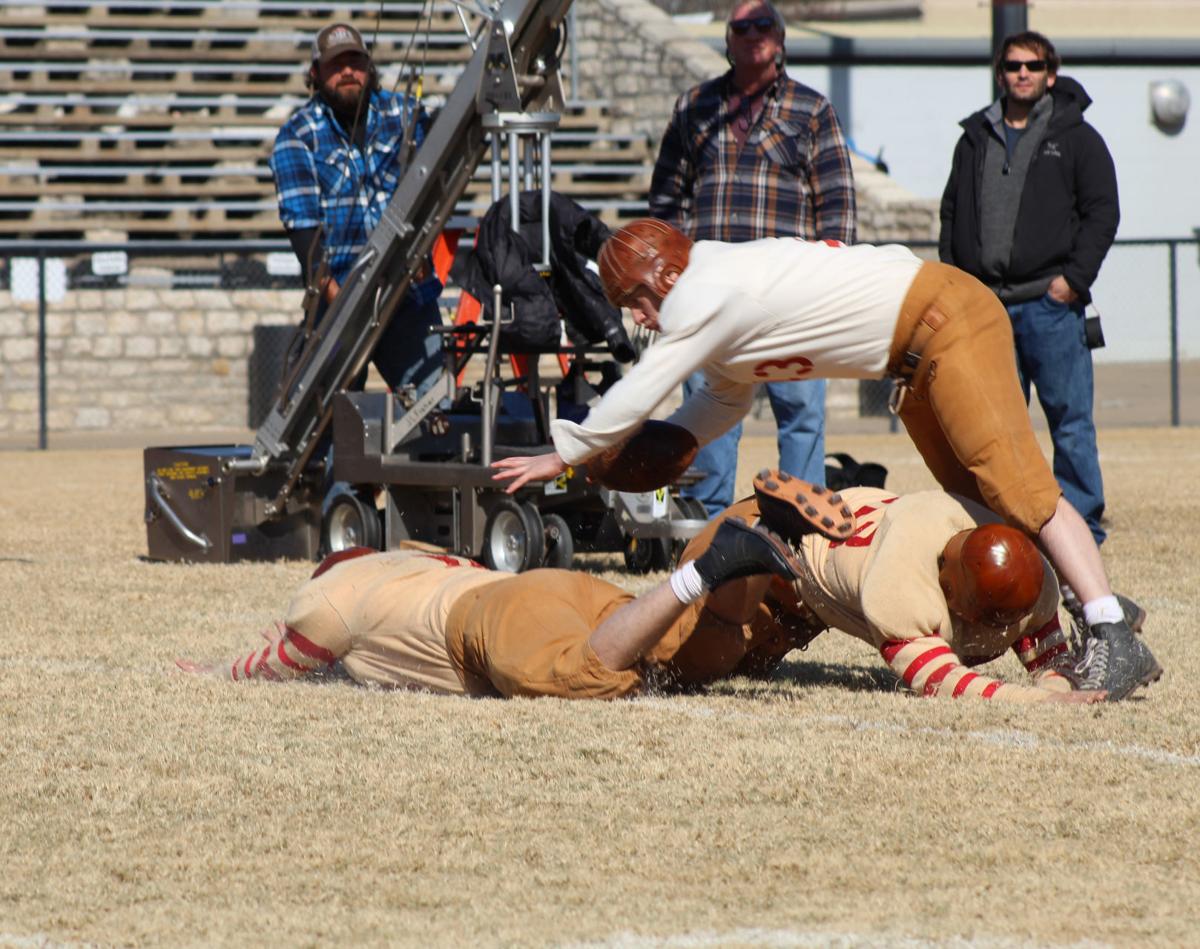 Mighty Mites Quarterback Hardy Brown flies over two Amarillo High School defenders during filming for “12 Mighty Orphans” at Cleburne ISD’s Yellow Jacket Stadium. Lead actors Martin Sheen and Luke Wilson were on the stadium set for scenes shot on Brooks Conover Field and in the “Rock Room” under the home side bleachers.

Cleburne ISD’s Yellow Jacket Stadium has joined the list of Fort Worth area location sites where filming is taking place for the movie production of “12 Mighty Orphans.”

It was lights, camera and action on Thursday at Brooks Conover Field and in the “Rock Room” under the stadium’s home bleachers, which was transformed into the locker room for the Mighty Mites, a football team of orphans from Fort Worth’s Masonic Home.

The story centers around an orphaned group of boys, coached by a Masonic Home staff member, whose home field was a rock-filled patch of ground. Starting out with no shoes, tattered jerseys — and no football — the team would go on to advance the state playoffs.

Martin Sheen and Luke Wilson, who share lead roles in the production, were on the stadium set along with a leather-helmeted team of teen actors portraying the Mighty Mites. Robert Duvall, who also plays a starring role, was not involved in the scenes filmed Thursday.

The movie is based on the Jim Dent book, “Twelve Mighty Orphans,” a true story of the depression-era football players and their coach, Rusty Russell.

Cleburne ISD was first approached by film scouts last spring about the use of the stadium as a possible production site, which was followed by numerous visits by producers, Director Ty Roberts and lead technicians. In October, the district entered into a two-day facility use agreement with Twelve Mites LLC.

“In April we began scouting for a football stadium of the period,” Key Assistant Location Manager Mark Mahlo said. “We had been looking online at stadiums from a street view. From the pictures taken from that first visit, we all agreed Yellow Jacket Stadium was amazing. After the first on-site visit involving the full production team, it was decided, no matter what, we were coming to Cleburne.”

Yellow Jacket Stadium just ended its 78th season as the second home of Cleburne football. Opening in 1941, its construction was designated as a Public Works Administration project in 1939 as part of President Franklin D. Roosevelt’s New Deal initiative to provide jobs during the Depression. The stadium was built on a six-acre plot of pasture owned by school district superintendent, Emmett Brown.

Made of concrete and rough-cut limestone from neighboring Somervell County and built to seat 3,800 fans, the project was completed at a cost of $80,000. The stadium was designated as a Texas historic landmark in 2010.

“There was very little we needed to do to take it back to the 1930s,” Mahlo said. “The stadium is so correct to the period. We wish we had five of them.”

Producer Houston Hill said the opportunity to film at the stadium will add a sense of legitimacy to the movie.

“There are only two WPA stadiums in the proximity of Fort Worth,” Hill said. “For us to be able to shoot at someplace built during the time period adds a level of legitimacy that you really can’t find anywhere else.”

Footage shot on Brooks Conover Field will be merged into montage of three different games as the Mites gain success and begin to capture the attention of Texas high school football fans. The locker room scene in which the orphans are playing Amarillo High School, has some very poignant moments which reportedly contribute to the finale of the movie. The filming under the Cleburne bleachers includes a fight scene.

Lewis’ second film shoot was at Farrington Field in which he was cast as a Highland Park High School parent attending the game between the Highlanders and the Mighty Mites.

“We filmed outside all day and it was cold,” he said. “I did stand next to Martin Sheen at one point. In that scene, I was among the Highland Park fans who cheered as the Masonic Lodge players came out. We were Highland Park fans trying to get the orphan teams’ autographs.

“It’s been a very fun experience. I went through makeup, they styled my hair to match the period and it’s amazing what the prop department has accumulated for the production. I carried an antique valise and in the Highland Park scene we had football tickets and waved pennants that are actual pieces from the 30s. What’s really funny is I know the man in charge of props. We worked together at Boy Scout camp in the 70s when I was still in high school.”

His scenes also included Wayne Knight, who played “Newman” the postal carrier in the TV show “Seinfeld”. Knight is cast in the role of Frank Wynn, who runs the Masonic Home.

“It was a great and unique acting opportunity,” Lewis said. “As extras we made $8 an hour. Most of us were there for the fun. I am hoping to get a glimpse of myself in the film when it’s released.”

CISD Superintendent Kyle Heath is familiar with the story of the Mighty Mites, and has read Dent’s book.

“It’s a great story and should make for a great movie,” Heath said. “This is something wonderful for Yellow Jacket Stadium and Cleburne. This adds to the history of the stadium and the many exciting things that have taken place there through the years.”

Thursday’s filming is not the first time the Cleburne stadium has played a starring role in an entertainment production. In the 1990s, commercials for Whataburger and Dr Pepper were shot at the home of Jacket football.

If you drove down West Henderson Street on Thursday or Friday, chances are you saw a movie crew filming scenes for “12 Mighty Orphans” at Cleburne ISD’s Yellow Jacket Stadium, also known as “The Rock.”