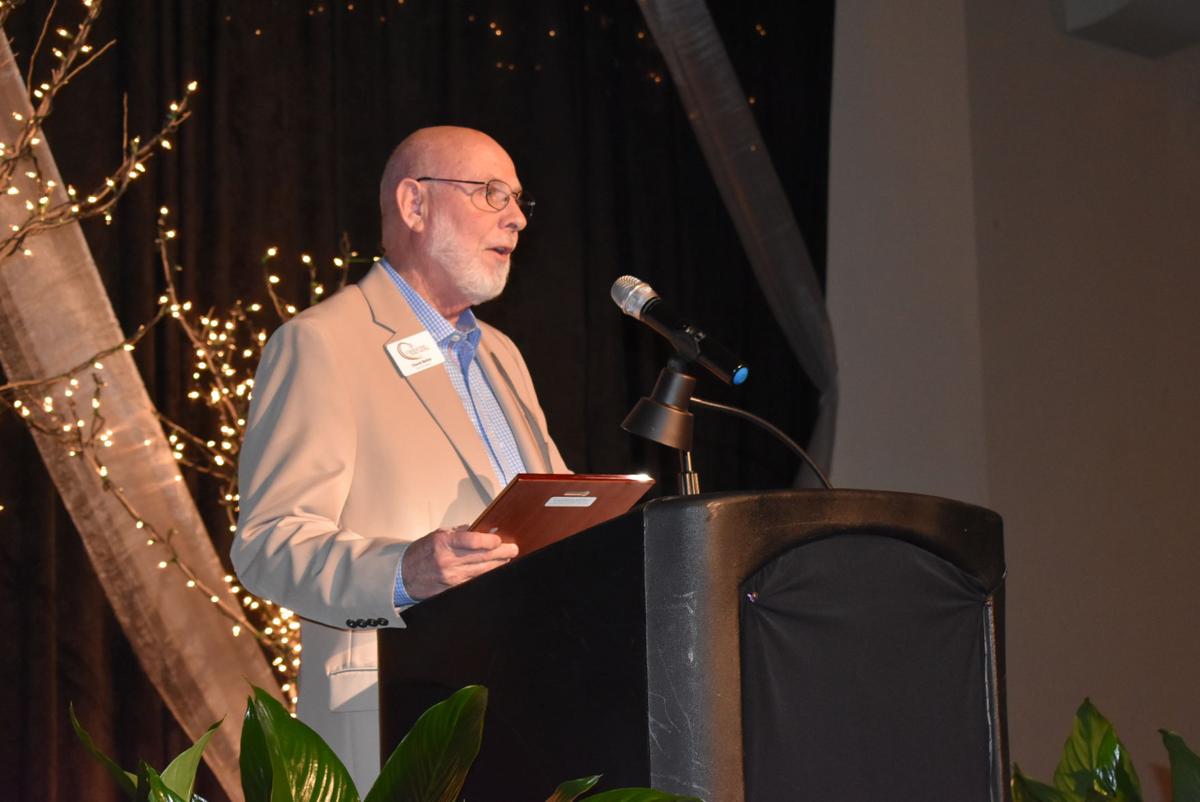 Chuck Bailey was named Citizen of the Year at the Cleburne Conference Center on Thursday as the Cleburne Chamber of Commerce hosted its 99th Annual Community Awards Banquet. 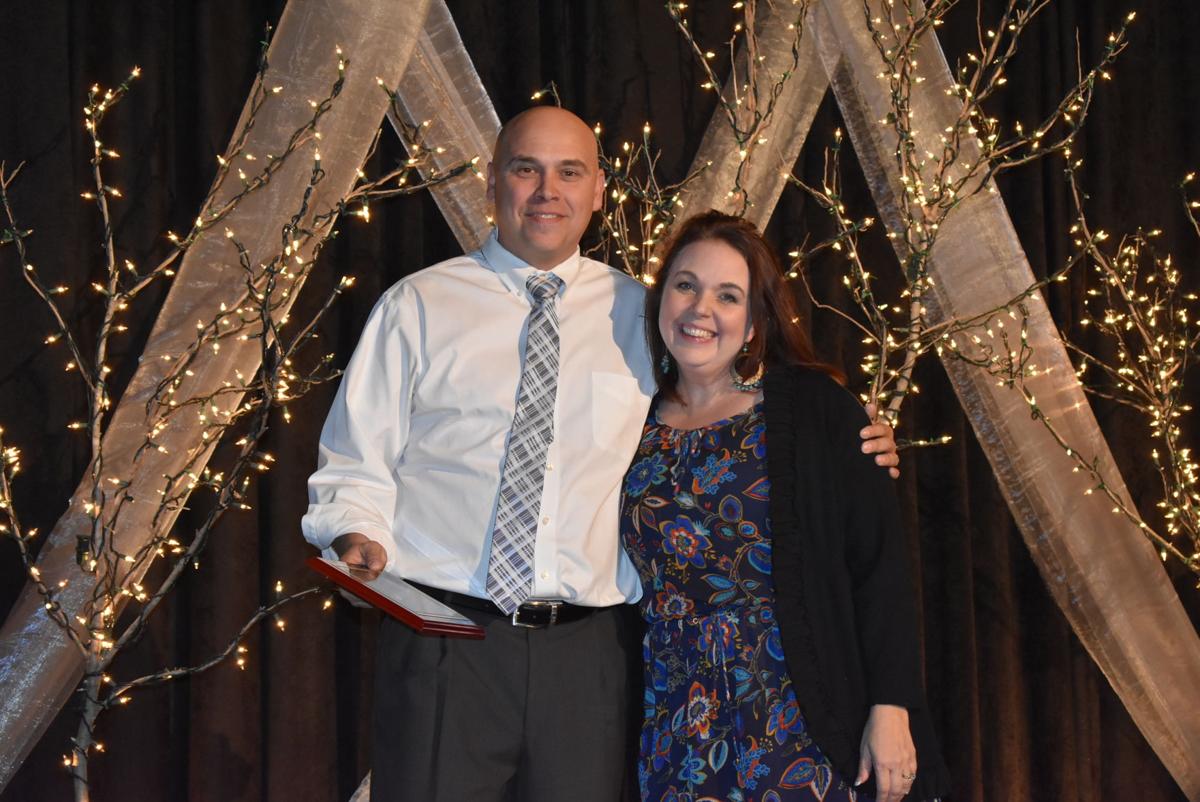 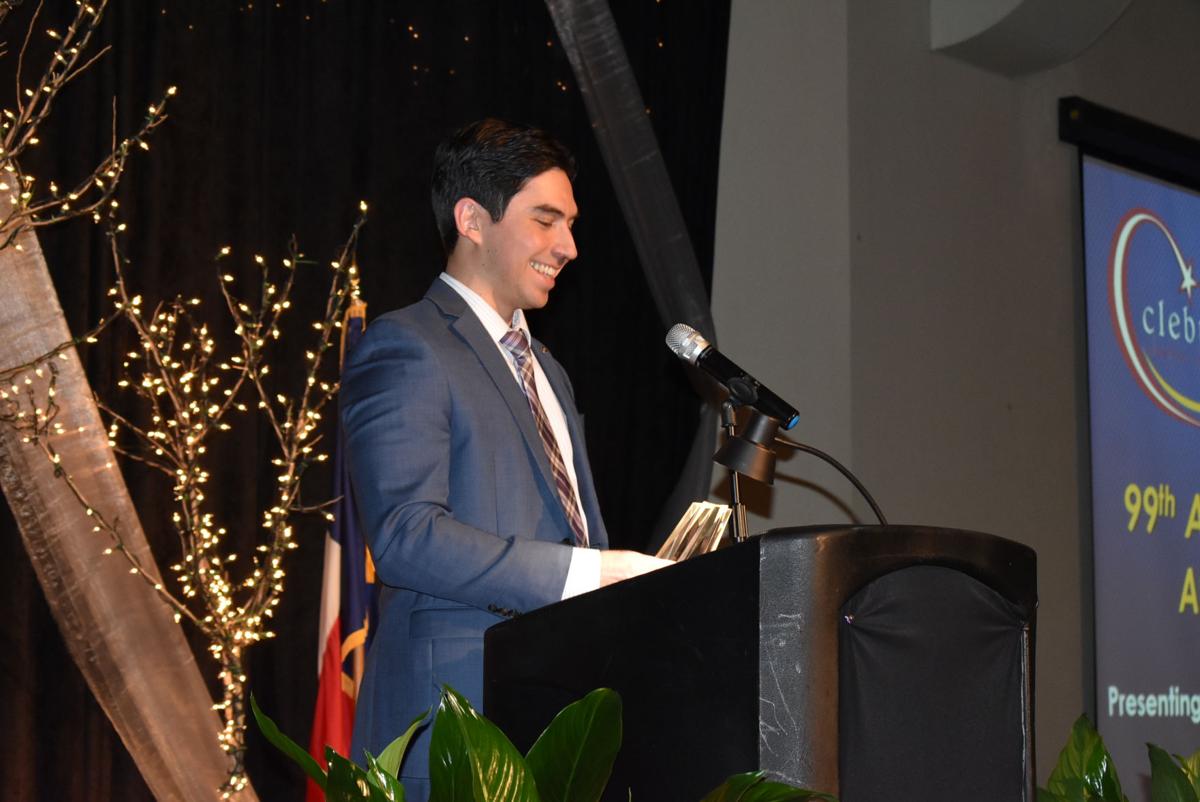 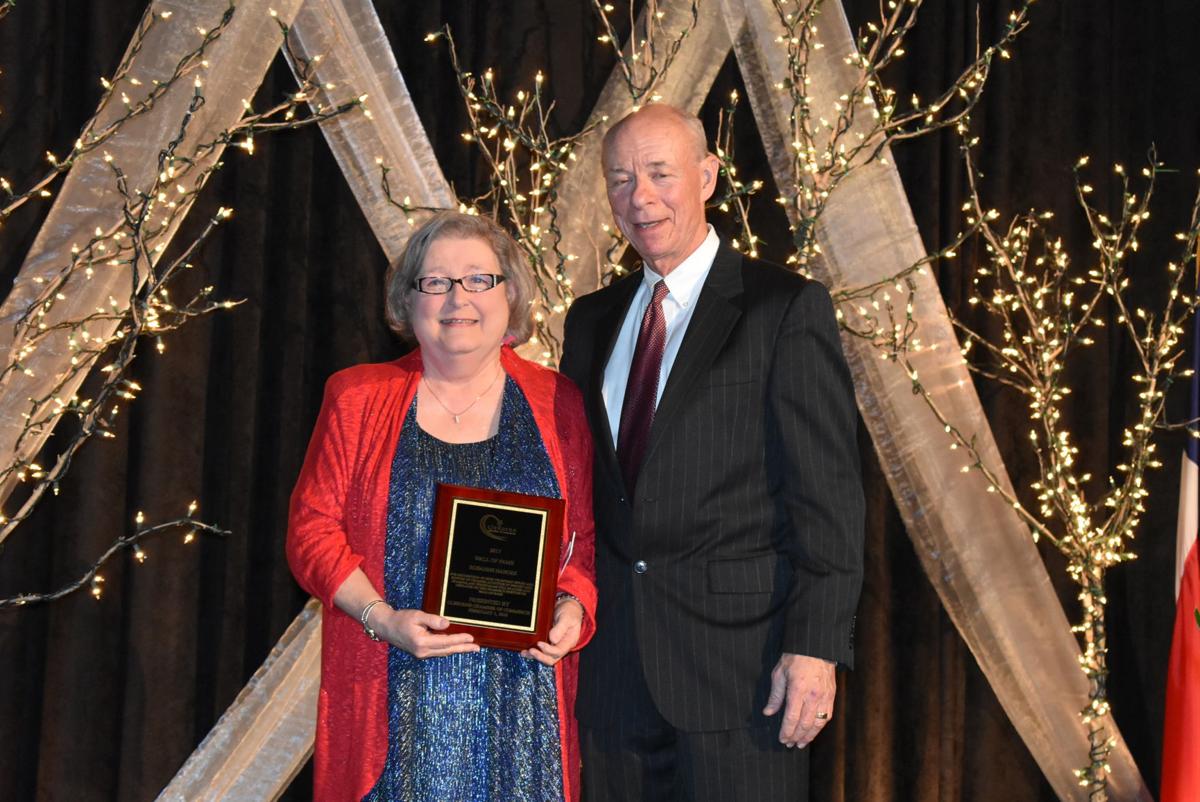 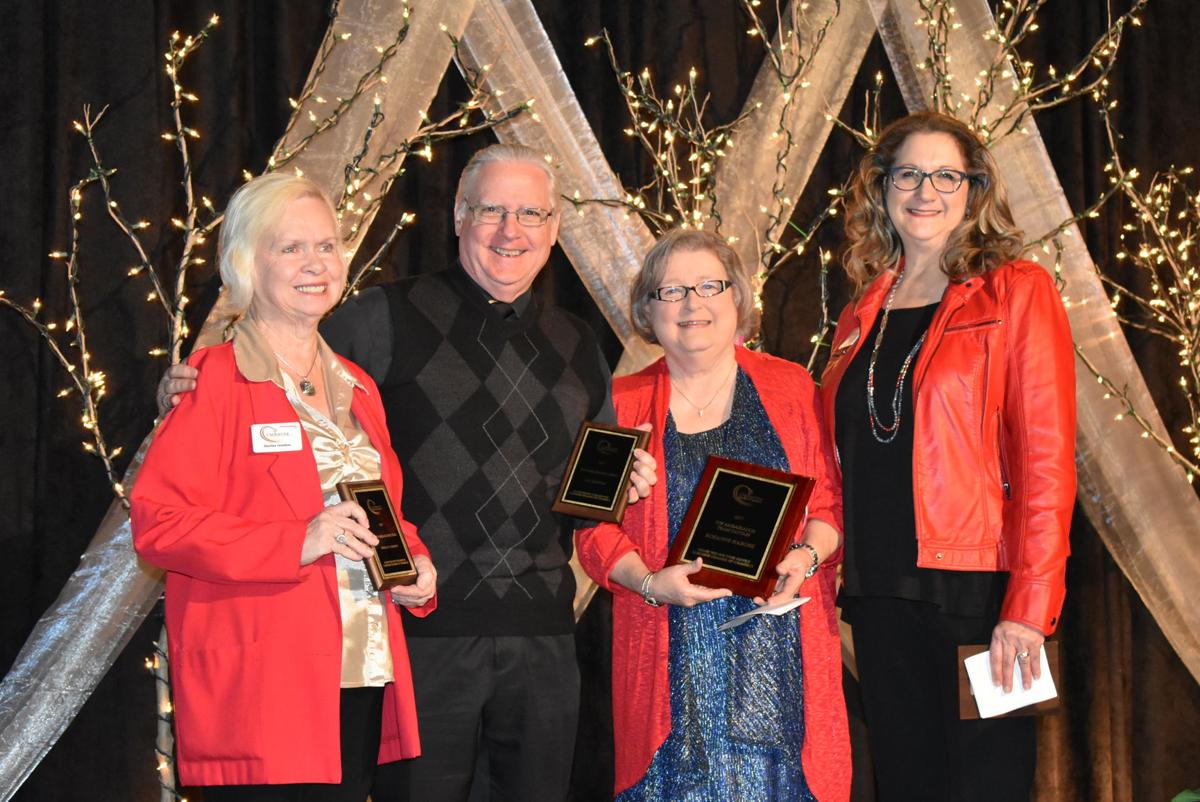 Rosanne Nabors, second from right, and her team of ambassadors were the winning team for 2017, accumulating 1,058 points for participating in ribbon cuttings, community improvement and ground breakings for the Cleburne Chamber of Commerce. From left are Shirley Gordon,  Jay Cornils, Nabors and Judy Patton.

Chuck Bailey was named Citizen of the Year at the Cleburne Conference Center on Thursday as the Cleburne Chamber of Commerce hosted its 99th Annual Community Awards Banquet.

Rosanne Nabors, second from right, and her team of ambassadors were the winning team for 2017, accumulating 1,058 points for participating in ribbon cuttings, community improvement and ground breakings for the Cleburne Chamber of Commerce. From left are Shirley Gordon,  Jay Cornils, Nabors and Judy Patton.

Highlighting some of the successes of 2017, the Cleburne Chamber of Commerce honored several members for their outstanding service to the community at the Cleburne Conference Center on Thursday as the chamber hosted its 99th annual Community Awards Banquet.

Outgoing 2017 Chamber Board Chairman Terry Bay remembered the past year as exciting for both the chamber and the city of Cleburne.

“Cleburne ISD celebrated the groundbreaking for the high school and construction is moving along nicely,” he said. “The Depot project continues to draw interest and the Cleburne Railroaders stadium was named the best independent baseball park, in which over 330,000 voters participated.”

Incoming Board President Marty Kelley said Chamber President Cathy Marchel gave him hope that he will do great in his position this year.

“I live across the street from Cathy and she told me I can do this,” he said. “I lost my mom in September, and Cathy probably doesn’t know this, but she has been like a mother figure to me. So, I want to tell Cathy that she can do this, too.”

Marchel, who was diagnosed with cancer last month, received a standing ovation when she and her family arrived at the conference center.

A video of more than 50 community members shared thoughts and prayers with Marchel, proclaiming #ISTANDWITHCATHY.

Cleburne Mayor Scott Cain proclaimed that the city of Cleburne stands with Marchel during her fight against cancer.

“In recognition and appreciation for her extraordinary contribution to our community, declare our solidarity at this time,” he said. “By virtue of the authority vested in me by the laws of the city of Cleburne, Texas, hereby proclaim that we as a community #standwithcathy believing for a positive outcome and pray for God’s blessings on her life.”

Judy Patton, who was named Chamber Ambassador of the Year, announced the winning ambassador team led by Rosanne Nabors.

“The ambassadors play a vital role in the chamber of commerce,” she said. “In 2017, they have cut over 1,036 feet of red ribbon, attended 56 ribbon cuttings, community improvement and groundbreakings. They assist the chamber staff with many projects and are true servants to our community business.”

Nabors was also chosen for the Wall of Fame Award, which is presented to the chamber member who, by precept and example, best exemplifies true voluntary chamber effort and support.

“Along with her many other qualities she is an excellent leader, follower when needed and always a good listener and friend to the chamber,” Patton said. “She is dedicated to the mission of the chamber to promote business and the community.”

The Community Service Award, presented by Plaza Theatre Co. Director of Education Tina Barrus, was given to iServe Missions.

“This past year, this community service-based organization has benefitted the Cleburne community in many ways,” Barrus said. “They are so deserving of this recognition for the enormous impact they have on the people in our community. They truly are a group dedicated to helping the people of Cleburne and Johnson County.”

The Young Professional Award, presented by Blake Jones, was given to Matt Victory, who was born and raised in Cleburne.

“He moved away to Harvard University where he studied computer science,” Jones said. “After graduating from Harvard, he worked as a software developer for Microsoft in Seattle for three years. In 2006, he moved to Connecticut where he spent nine years as a hedge fund trader.”

Jones said Victory moved back to Cleburne in 2015.

“He is a partner in the family’s financial advisory firm where they help hundreds of members in our community reach their retirement goals,” Jones said. “Outside of work, he is an active member of multiple Cleburne organizations including the Cleburne Rotary Club, Tuesday Forum and Young Professionals of Cleburne. He volunteers with the Marti Foundation and for the last two years he dressed up as Santa’s security detail, an elf alternative who prepares the kids to meet Santa.”

Jones said Victory’s most visible volunteer work in the community is at Plaza’s stage.

“In 2017, he performed in five productions, totaling 26 weekends of performances,” Jones said. “This represented a personal time commitment of over 650 hours of rehearsals and performances.”

The Citizen of the Year Award, presented by Cain, was given to Chuck Bailey.

“The individual we honor tonight has been giving back to this community for many years,” Cain said. “He is always willing and eager to help where he sees a need and thinks he can make a difference.”

Cain noted that Bailey is a member of the chamber’s board of directors, has been an ambassador for many years, previously served on the chamber’s executive board, is on the advisory board for the Children’s Advocacy Center of Johnson County, a member of the Friends of Texas Health Harris Methodist Hospital Cleburne, a member of the Cleburne Economical Development Foundation and is part of the Tuesday Forum business group.

Bailey was moved to tears when he realized it was him who was receiving the award.

“We moved here from the east coast, but Cleburne is my home,” he said. “I’ve never been in a place in life where people treat you the way they do here. I don’t know what else to say, but thank you.”