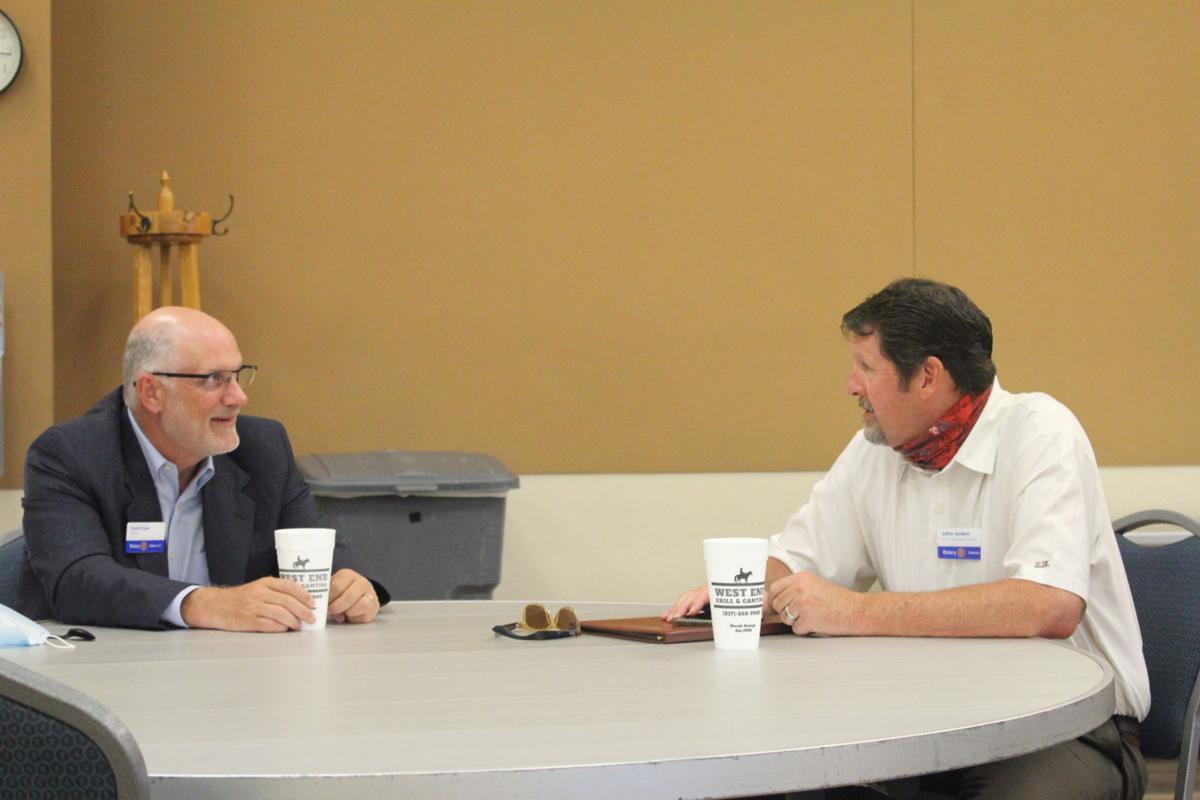 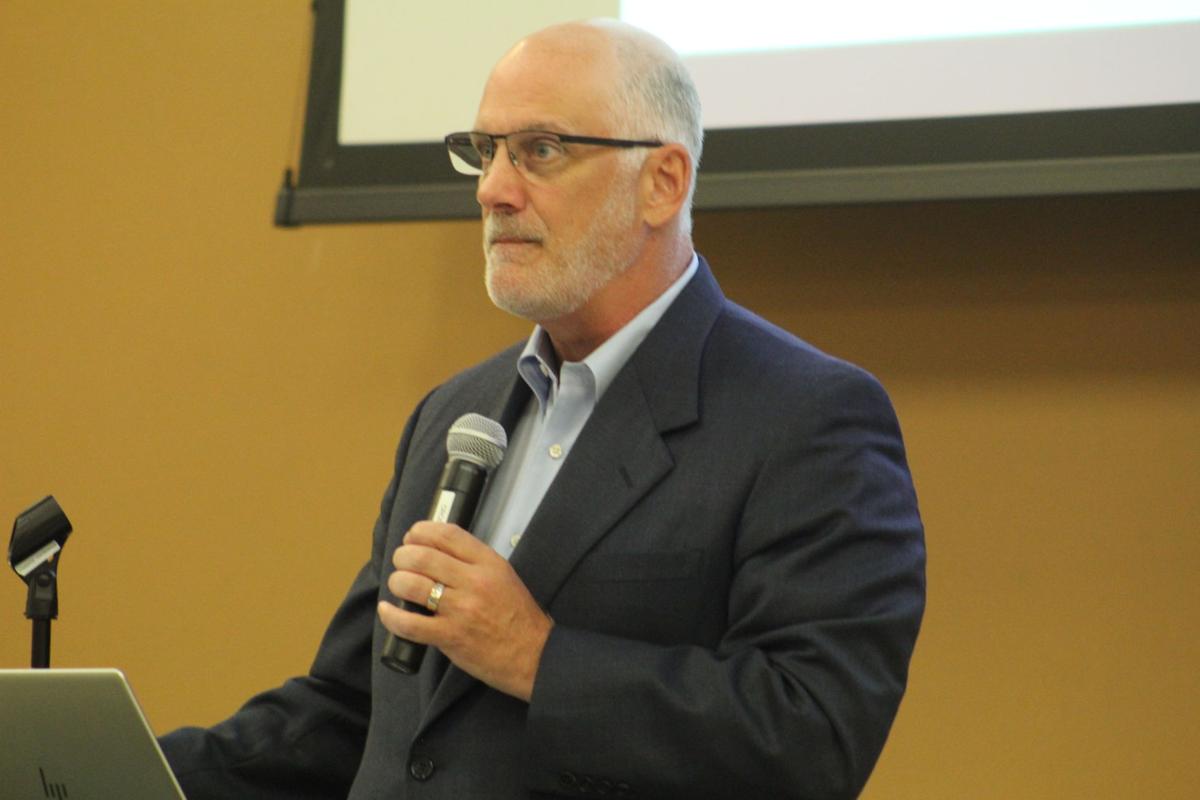 Cleburne Mayor Scott Cain fields questions from the audience during Thursday’s Cleburne Rotary Club meeting, at which he presented a state of the city.

Cleburne Mayor Scott Cain fields questions from the audience during Thursday’s Cleburne Rotary Club meeting, at which he presented a state of the city.

Cleburne Mayor Scott Cain delivered a city update during Thursday’s luncheon of the Cleburne Rotary Club during which he also discussed the ongoing COVID-19 pandemic and the city’s namesake.

Like it or not, the COVID-19 situation appears set to hang around for a while, Cain said. Current estimates range from six to 18 months.

“We’ve tightened our belt everywhere we could,” Cain said. “And we haven’t seen the reduction in sales tax revenues that we thought we would from the shutdown. We were preparing for worst-case scenario. But, with one month’s data having been reported from the COVID period our revenues were down by single digits. We were expecting to see a double-digit decrease.

“Of course, we still have a couple more months of numbers to come so that could change.”

The city, in 2019, issued more than twice the amount of single-family building permits than it did in 2018, Cain said.

“And we look to be on track to outperform last year in new housing starts even with COVID,” Cain said.

Cain said the city issued 232 single-family home permits last year compared to about 10 a year when he first became mayor. The city’s so-called infill program, which reimburses builders for up to $4,000 in impact fee costs, has been a huge success as well. The program encouraged the building of new homes on otherwise unprofitable properties in older neighborhoods, which in turn increases city values and improves the neighborhood affected. Cain also talked of the city’s Hope Program, whereby elderly, disabled and low-income residents whose homes are out of code compliance are directed to area charitable organizations who help repair their homes, a program Cain called likely unique to Texas.

Cain ran though a list of 2019 city accomplishments starting with a property tax reduction. The hope, Cain said, is that the city can keep the rate at least steady going into the new year.

Last year saw the undertaking of projects to improve more than nine miles of city streets and more than five of sidewalks.

“For the first time in well over 100 years we’re getting new sidewalks in downtown,” Cain said.

The Cleburne Youth Sports Complex hosted more tournaments than in recent years and, despite the fact that the Cleburne Railroaders’ season was canceled, tournament play and other activity continues unabated at The Depot.

“And get this, since [Cleburne Police Chief Rob Severance] has come on board we’ve seen a reduced crime rate seven years in a row, a drop of 54 percent since then,” Cain said. “Cleburne has been listed as one of the safest cities in America to live in.”

As it was in March, the city’s response goals regarding COVID-19 remain health and safety, communication and economic impact.

The goal is to ensure local health care facilities don’t become overrun, not just from COVID patients but from everyone, Cain said. That’s especially true in protecting health care workers to ensure they remain available to help residents suffering COVID or other ailments and/or emergencies.

The goal also includes steps necessary to protect those most vulnerable, those older than 60 or with underlying health issues.

It remains the city’s duty as well, Cain said, to communicate timely, accurate and effective news regarding the pandemic.

Realizing the toll COVID-19 has taken on individuals and businesses, Cain called the city’s long term plan a marathon as opposed to a sprint and urged residents to remain patient and kind with one another.

“Remember who the real enemy is,” Cain said. “It’s COVID, not people with different opinions from yours. I’m surprised by how many internet experts there are with medical degrees on social media.”

Adding that he doesn’t get his medical news from either Fox News or CNN, Cain encouraged residents to also rely on data, science, doctors and other official sources over those and/or social media chatter.

With numbers continuing to rise, the plan is for Cleburne to continue testing for COVID-19 and to stress common sense practices of frequent sanitation, social distancing and wearing face coverings.

The latter, Cain admits, remains a controversial topic with no easy answers. Cain added that the one thing all can agree on is that wearing face masks “sucks.”

Masks are not a “silver bullet” for COVID-19, Cain said, quoting Cleburne Fire Chief Scott Lail, but rather one component of a multifaceted approach to slowing the virus’ spread.

“People need to understand that the cover is designed to lessen the number of droplets that the wearrer expels into the air wile talking, breathing, coughing and sneezing,” Lail said. “In other words, it doesn’t stop the virus; it stops what the medium that virus is traveling in.”

“Masks don’t keep you from getting COVID,” Cain said. “They just lower the risk of you giving it to someone else.”

Cain said his standing order approves outdoor gatherings of up to 100.

“I took issue with Abbott pulling that [updated order] on the eve of the 4th of July,” Cain said. “Restricting our freedoms even more on the day we celebrate our freedoms.”

Cain, in answer to one Rotarian’s question, said he has received a few inquiries from media outlets outside of Johnson County concerning Cleburne’s namesake, Civil War Gen. Patrick Cleburne.

“I laughed,” Cain said, “Because our town is much more than our namesake. But I’m also proud of our namesake.”

Cleburne, Cain said, was himself an immigrant who advocated for an end to slavery.

“I’m all for having conversations on historic statues and other matters in order to build bridges and better understand one another,” Cain said. “But it’s important that we also learn from history so that we don’t repeat it.”