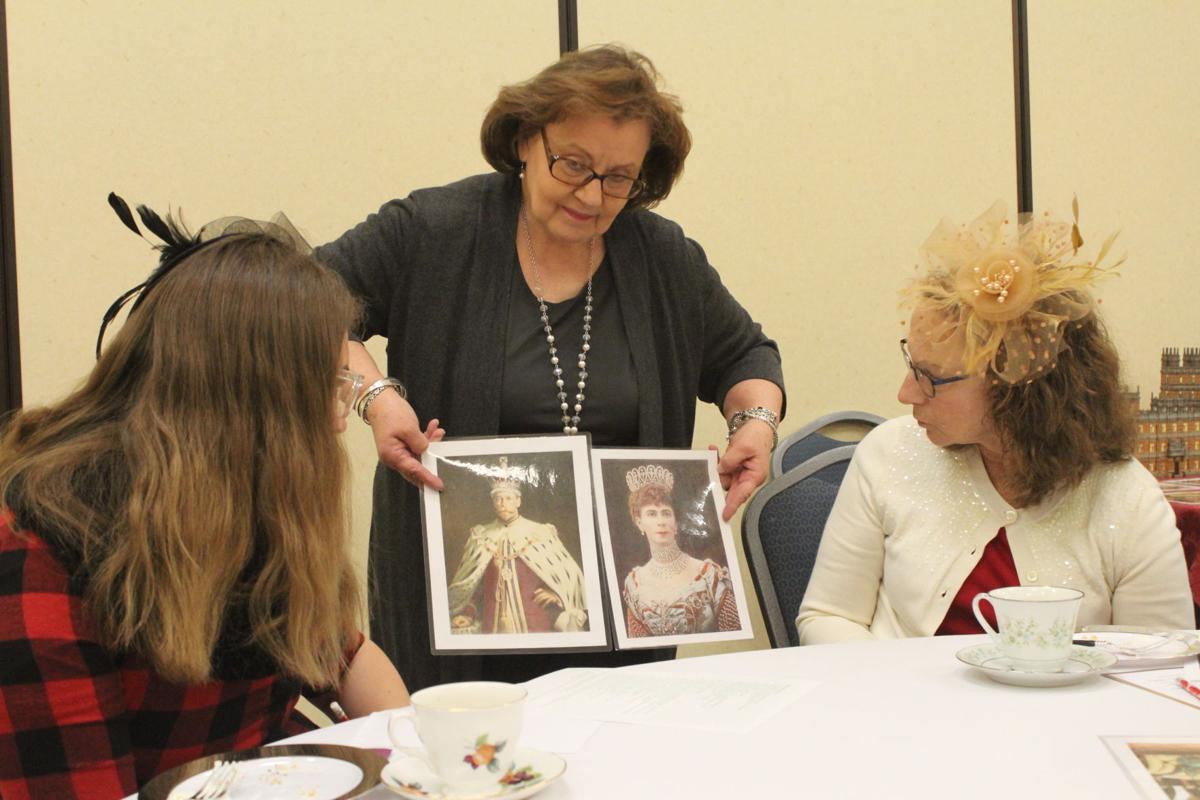 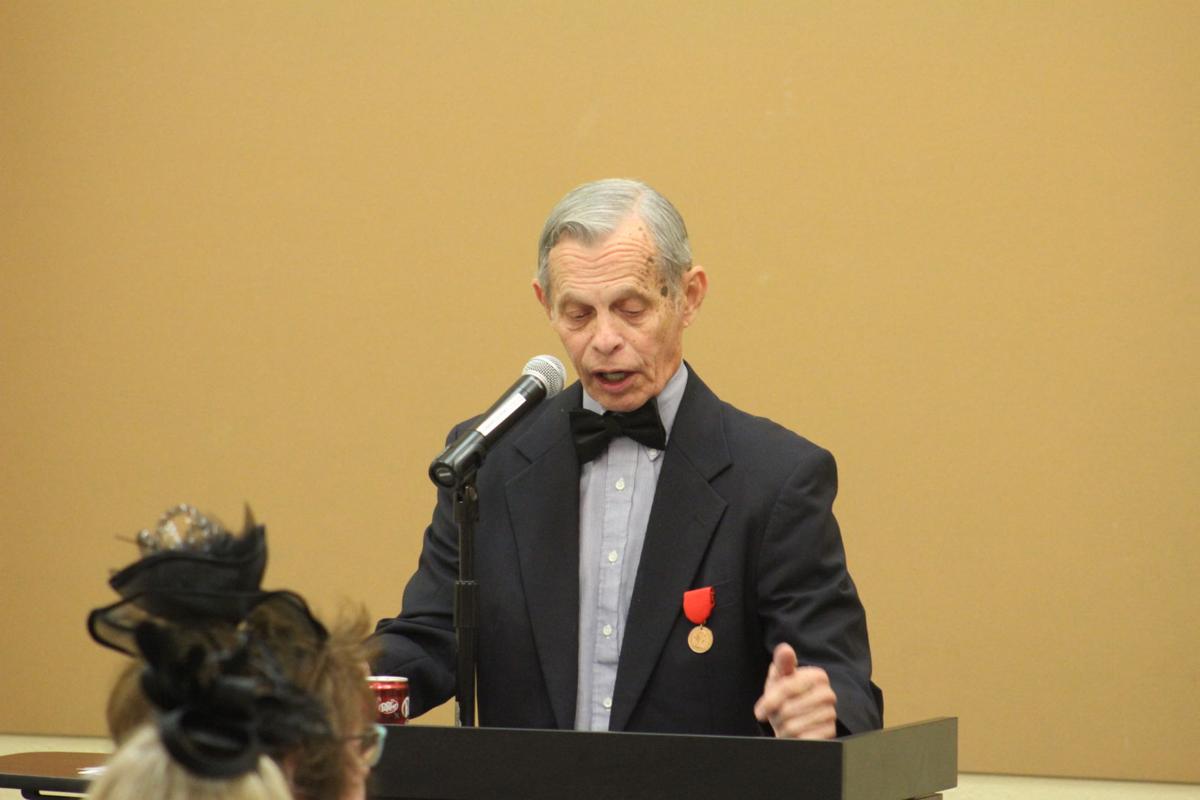 Phipps, like most of the 40 plus attendees, sported early 1900s period attire.

The tea, held at the Cleburne Conference Center, was part of the library’s ongoing series of events and activities held throughout the year.

Many are fans of the wildly popular British TV show and movie though several attended for other reasons.

“I’ve never watched the show,” Cleburne resident Johnna Buntin said. “I’m just intrigued by British culture and love English tea. I also love the way they dressed during the period of the show and saw tonight as an opportunity to wear a fascinator in Cleburne, Texas, and not be looked at strangely.”

“This is something Stormie and I can do together,” Buntin said. “I’m always looking for activities and opportunities she and I can do that she can learn from. Tonight we’re actually both learning new things.”

Though she’s never been, Buntin said she plans to visit England with her daughter after her daughter’s graduation.

“Downton Abbey” ran six seasons relaying the stories of an upper-class family and the servants who maintained their large estate. Phipps, who is also an Egyptologist and former professor, discussed the show, the story behind the show, English history and tea.

Phipps opened by announcing that Queen Elizabeth was, unfortunately, unable to attend.

The tradition of English afternoon tea dates to the reign of Queen Victoria, Phipps said.

“Anna Stanhope, the duchess of Bedford, created the concept of afternoon tea,” Phipps said. “Victorians preferred to have dinner about 8 p.m.. Therefore, around 4 p.m. everyone needed an energy lift. Remember the old Dr Pepper slogan of 10, 2 and 4? This was the same concept.”

The practice caught on, first among high society and later led to the creation of tea rooms throughout England.

Turning his attention to “Downton Abbey,” Phipps credited the show’s popularity to quality.

The acting was first rate,” Phipps said. “The costumes were spectacular. The attention to detail was an important aspect. They even had an advisor who came on set to make sure the dining room table was properly set for the lavish dinner parties.”

The show also tugs at our daydreams, Phipps said.

“Most of us are not from aristocratic families,” Phipps said. “I’m sure not. Most of us are not entertaining friends in luxurious mansions, driving Rolls Royces, eating elegant meals or receiving visits from the royal family. I don’t even get the governor of Texas visiting me.

““Downton Abbey” allows us to imagine what life could be. We get a peek behind the curtain to see what high society is all about.”

The story, though fictional, incorporates historical events such at World War I, the sinking of the Titanic, 1918 flu pandemic and suffrage movement, Phipps added.

The visit from King George V and Queen Mary portrayed in the recently released movie is also based in part on an actual visit by the royal couple to another stately English manor.

Downton Abbey in real life is actually Highclere Castle, which sits about 40 miles from London.

“Highclere looks a lot like the House of Parliament,” Phipps said. “That’s because the same architect designed both structures.”

The three -story castle contains 19 fireplaces and a library stocked with more than 5,000 books and serves as home to Lord and Lady C.

In 1922 the then Lord C financed an expedition to Egypt where he and Egyptologist Howard Carter discovered the tomb of King Tut and more than 5,000 ancient artifacts. Phipps said he was fortunate enough to view many of the artifacts, which are now housed at Highclere Castle.

The best thing about the recent movie is that it leaves several plot lines unresolved, Phipps said.

In the spirit of the season, Phipps concluded by special take on “The Night Before Christmas,” reworked to include mentions of Mayor Scott Cain and Cleburne landmarks. He also touched on Christmas past.

“Many of the Christmas traditions we enjoy today are the result of Queen Victoria and Prince Albert in the 1800s,” Phipps said. “Those included decorating Christmas trees and sending Christmas cards.

“Many of the Christmas carols we still enjoy today were composed during that time.”

“My wife and I became fans of the show,” Walker said. “We saw the movie first so were a little late to the table but have been binge watching the show since. For me it’s my interest in the historical aspects.”

Reagan Walker said she accompanied her father because she enjoys a spot of tea.

“I’ve always been fascinated with Europe and English and Irish history in particular,” Reagan Walker said.

“My mother lives in Bedford now but she’s from Burleson,” Maxwell said. “We come to Candlewalk every year, and that’s how we heard about this. We’re major Anglophiles. I have the complete series [of “Downton Abbey”] on DVD in addition to many other British shows. I go all the way back to “Monty Python,” which, the PBS station in Dallas/Fort Worth was the first station in America to show that.

“I went to see John Cleese and Eric Idle at the Majestic Theater and was in Grand Prairie last night for the trivia night for the Beatles’ ‘White Album.’ We just love all things British.”

“I spent a lot of time in England in the ‘80s when my brother was living in Germany,” Parvin said.

Parvin and her friend Jane Ulbrich began holding afternoon teas in Cleburne about 40 years ago.

“It reminds me of a time when people were genteel and enjoyed tea, conversation and a sense of community together,” Hand said. “We’ve lost a lot of that.”