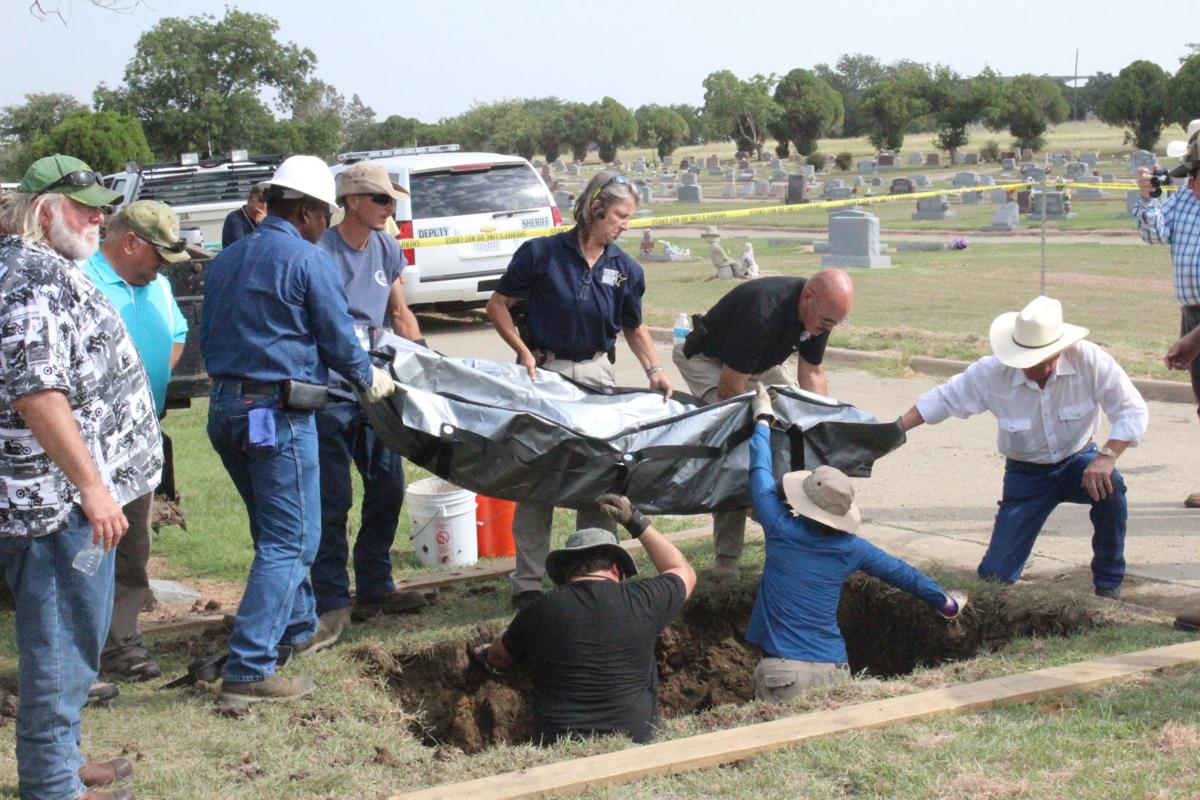 Officials lift the body of a murder victim known as Mr. X from his unmarked grave in Cleburne’s Rosehill Cemetery in 2013. Members of the Johnson County Sheriff’s Office Cold Case Squad hope to learn Mr. X’s identity through dental and DNA samples. Mr. X’s was found shot to death in rural Johnson County in 1972. 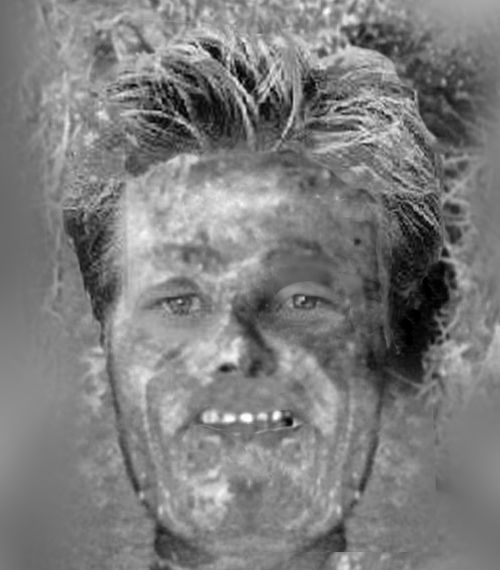 Officials lift the body of a murder victim known as Mr. X from his unmarked grave in Cleburne’s Rosehill Cemetery in 2013. Members of the Johnson County Sheriff’s Office Cold Case Squad hope to learn Mr. X’s identity through dental and DNA samples. Mr. X’s was found shot to death in rural Johnson County in 1972.

One line of thought when it comes to the victim for now known simply as Mr. X is that he likely wasn’t from Johnson County.

“But we’re still trying to find out and really don’t know at this point,” Johnson County Sheriff’s Office Cold Case Squad member Jim Varnon said. “His murder made the news in 1972, but no one came forward. The Hood County Sheriff’s Office had a missing person at that time and came out and looked at [Mr. X] but concluded that he wasn’t their guy.”

Fellow Cold Case member Jim Ferguson added that some believe Mr. X may have been a laborer or otherwise traveling through the area for work or other reasons at the time of his death.

“That’s what some have suggested,” Ferguson said. “But again, we really don’t know. The reason for that thinking I guess is that if he had been a person of prominence, a family man, businessman in Cleburne or something you would think that somebody would have reported him missing or came forward on him, but nobody did.”

One thing Varnon, Ferguson and other Cold Case members agree on is that Mr. X has enjoyed quite an adventure for someone 48 years dead and that he’s arguably more well traveled in his afterlife than he probably ever was while still drawing breath.

Since his exhumation from Cleburne’s Rosehill Cemetery in August 2013, Mr. X has paid visits to Denton, Virginia, Alabama, California and the Netherlands.

Digging into the past

“Pete had a passion for these old cases and was always prodding us along to take a look at different things,” Ferguson said. “Which was a good thing. Everyone needs someone to move them off center sometimes.”

Kendall, who passed away in 2013, researched the case through old Times-Review articles as well as help from former Cleburne Councilman Bob Force and former Cleburne Police Department Detective N.H. Laseman.

Because of his efforts on Mr. X and other unsolved cases, then Johnson County Sheriff Bob Alford and members of the cold case squad honored Kendall several weeks after his death by hanging a plaque in the Johnson County Sheriff’s Office in his honor. Kendall is the sole non-law enforcement officer so honored at JCSO.

Rancher Sam Miller, on Dec. 11, 1972, noticed vultures lighting near a clump of cedar trees about 50 yards south of what is now County Road 1131 about 14 miles west of Cleburne and less than a mile from the Hood County line.

Miller found the body of a nude man who had been shot twice at close range with a .25-caliber weapon.

The fatal bullet entered the victim’s left side of the chest and heart.

Miller called then Johnson County Sheriff Cliff Benson. Dick Bradbury, justice of the peace at the time, ruled the death a homicide. Investigators determined that the man who soon after became known as Mr. X had been dead about four days. Animals by that time had removed several of his body parts, including his eyes.

Several 1972 Times-Review articles contain no mention of ejected cartridges found near the body. Investigators believe Mr. X may have been killed elsewhere and dumped in rural Johnson County.

JCSO Detective C.C. Kennard told then Times-Review Editor John Butner on Dec. 12, 1972, that a full set of fingerprints had been sent to Fort Worth for identification. The prints resulted in no hits and Mr. X’s body was sent to the Dallas County Medical Examiner’s Office for a full autopsy, according to reports, but the fingerprints have since gone missing.

So have pictures and a large portion of Mr. X’s skull from the bridge of his nose down.

“Without that part, his upper and lower jaws, and any pictures it’s hard to reconstruct what he looked like,” Varnon said. “From his nose down he could look like Bob Hope, Jimmy Durante, anyone really.”

The Dallas M.E. offices have moved since 1972 and anyone who worked there at the time is long gone now.

“We got a lab report but that’s it,” Ferguson said. “Anything else they’ve been unable to find so far.”

Cold case members continue to hope that the missing portion of Mr. X’s skull and any pertinent photos and other related information are collecting dust in one of the M.E.’s storage areas and will one day be located.

Burying Mr. X in an unmarked pauper’s grave cost Johnson County $300 in 1972, according to cemetery records.

Dr. Wendy McQuade, an anthropology professor at the University of North Texas, and others were on hand Aug. 8, 2013 as Cleburne Cemetery backhoe operator Elroy Williams began to unearth the grave. Four feet down they found what was left of Mr. X’s pine coffin.

“Just remnants of the wooden coffin,” Varnon said. “The body bag was intact but the cloth zipper had deteriorated. Mr. X was all bones, no soft tissue or hair left. The bones were loose. In other words, not connected. What was left only weighed a few pounds.”

“You hear about getting DNA from dinosaur bones and ancient men buried in Egypt and all,” Ferguson said. “But apparently the seepage into that bag contaminated and deteriorated the bones and DNA.”

“Subsequently Bob Evans, who is now deceased, and I went to UNT and picked up the skeleton and mailed it to Bode Technologies in Lorton, Virginia,” Varnon said.

Bode Technologies were able to extract enough DNA to get a partial profile, which was uploaded onto CODIS and NAMUS, Varnon said.

“A profile in CODIS is not looking for his genealogy,” Varnon said. “It’s a computerized DNA criminal base. NAMUS is a database to find missing persons and to identify unknown dead. Mr. X died in 1972, which was before any kind of DNA identification was even conceived. But the possibility exists that if he has living relatives somewhere who are looking for a missing person they can contact NAMUS and submit their DNA to compare the two. But so far nobody has.”

The Bode Technologies attempt, which has thus far been the most successful attempt, came at no cost to Johnson County thanks to available grant funding.

“I think it’s important that people know that none of this has cost the county anything other than minor shipping charges,” Ferguson said.

The increasing popularity of Ancestry.com and similar sites through which people research their family trees has also proven a boon to law enforcement. Several cases gone cold, in some instances decades ago, throughout America and the world have been solved through comparisons against DNA samples submitted to genealogy services and websites.

The problem with Mr. X is that the necessary kind of DNA remains elusive.

“yDNA, which is used for CODIS and NAMUS, will not help us on a genealogical search,” Varnon said. “It has to be autosomal DNA.”

Varnon said Cleburne resident Pete Wrench in 2018 volunteered to help the cold case squad with a genealogical search for any living relatives of Mr. X and put squad members in touch with the DNA Doe Project, who agreed to help.

“We were very lucky since DNA Doe Project, which is headed by Colleen Fitzpatrick and Margaret Press in California, receives hundreds of requests from all over the United States. Their service is free, funded by donations, but they can only accept a small fraction of the cases presented by law enforcement.

Through those connections Mr. X’s bones traveled to DNA Solutions in Oklahoma City, which failed to turn up any usable DNA. Mr. X journeyed on to the International Commission on Missing Persons in The Hague, Netherlands.

“They specialize in mass casualties, war crimes and other atrocities occurring worldwide,” Varnon said. “It’s a world-funded program as I understand.”

But, no luck was to be found there so Mr. X detoured to HudsonAlpha Lab in Huntsville, Alabama, where attempts at successful DNA extraction also came up short.

Mr. X’s bones in April moved on to Astrea Forensics in California.

“They specialize in, among other things, DNA extraction form ancient bones,” Varnon said. “Currently, we are awaiting their results.”

Another woman is working on a facial reconstruction of Mr. X, a challenge given the AWOL chunk of his skull.

“The CODIS and NAMUS stuff will always be there so something could still come of that,” Ferguson said. “Now we’re just trying to get something to work with the genealogy stuff because people are having more and more success through that route.

“But we’ve done just about everything else we know of in trying to get this guy identified otherwise.”