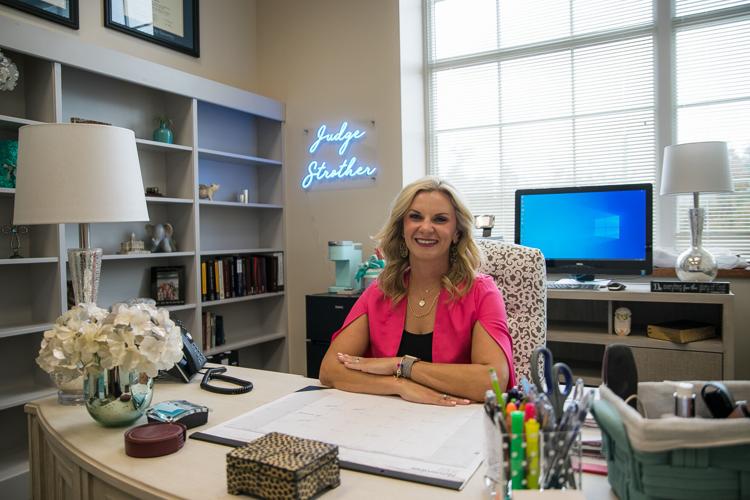 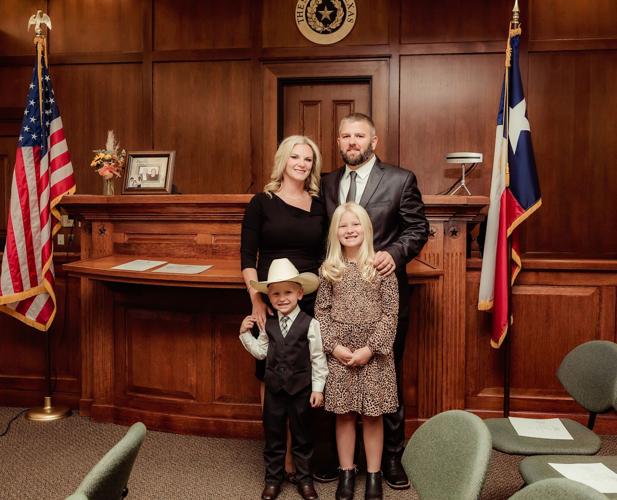 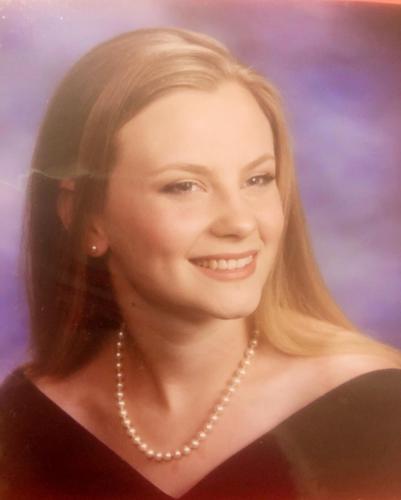 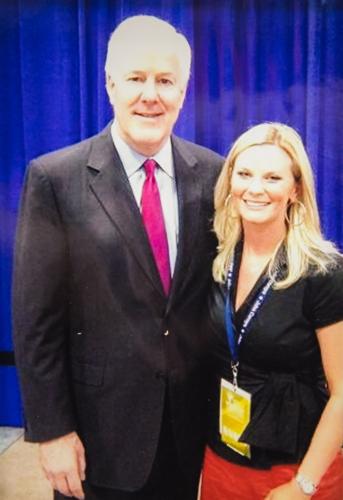 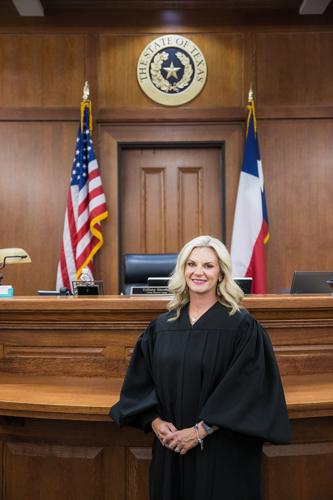 “It still seems pretty unreal, different for sure,” Strother said. “Some people are like, ‘Hey Tiffany, I mean judge.’ So, still getting used to it.”

Strother’s service on the bench coupled with outreach efforts throughout her life made her the obvious choice as the Times-Review’s 2022 Woman of the Year.

Born 39 years ago in Hondo, Texas, Strother was adopted at a young age.

“My mom remarried and my stepdad adopted me at age 5,” Strother said.

Which necessitated a courthouse visit.

“I hadn’t been in a courthouse before then that I know of,” Strother said. “So, scared, not sure what was going on. The judge though was very nice. He talked to me, explained what was going to happen that day, how that was a good thing.”

Strother’s encounter with the judge also planted an idea in her young mind.

Most kids, of course, dream of being something different every week while growing up.

“I was, ‘Well, okay,’ when she told me that,” said Suzy Evans, Strother’s mother. “She hadn’t been expecting the judge to talk to her and the fact that he did and was so personable made it all the better because she didn’t know what to expect going in. She walked out after just in awe of him saying that’s all she wanted to do.

“I told her there’s a lot of stuff she’d have to do first to get to that point.”

A brief flirtation with dreams of paleontology at the age of 6 or 7 aside — “Because I used to like rocks and dinosaur bones, but I think every kid goes through that.” — Strother stayed the course.

“Not really,” Evans said when asked if her daughter’s determination surprised her. “I learned pretty early that, once she put her mind to something, she made it happen. All the way through high school she strived toward getting into law school. It wasn’t college, it was law school. She was always thinking one step ahead.”

Later, after she passed the bar, Strother asked her mother if she remembered the judge’s name.

“Because I wanted to let that judge know the impact he made on my life,” Strother said. “Turns out that judge who signed my adoption papers is [U.S. Sen. John Cornyn, R-Texas]. He was a district judge in Bexar County at the time.”

A framed photo of Cornyn and Strother taken a few years ago sits on the bookshelf in Strother’s chambers.

“I called his office and talked to one of his aides,” Strother said, explaining the photo. “Right after I passed the bar the Republican Convention was in Fort Worth that year so he arranged for me to come meet Sen. Cornyn and his wife. I told him about becoming a lawyer because of him and he told me that, as a judge, he always hoped and prayed that he was making the right decisions on adoptions because he rarely ever got to see the end result. He said it was really neat to see how it all turned out for me.”

Continuing with the story, Strother added that she reconnected with her biological father later in life.

“He’s in our lives, my kid’s lives,” Strother said. “He thought at the time he was doing what was best for me.”

Before entering law school, Strother earned a degree in agriculture economics from Tarleton State University, a choice influenced in part by her days at Sandra Day O’Connor High School in Helotes.

“Started in 4-H at 9 showing rabbits,” Strother said. “High school, FFA was the biggest part of my life. I was president of our chapter, which at the time was the largest chapter in Texas. Showed pigs, participated in ag communication, public speaking.”

All of which, Strother said, influenced her later life.

“Absolutely,” Strother said. “Learning to speak in public, caring for animals, record keeping and the responsibility all that requires. I still do as much as I can to support kids here who are in 4-H and FFA because you learn amazing life skills in those organizations.”

Even upon meeting her husband-to-be, Jonathan Strother, at Tarleton, Strother said she remained on track.

“I told him, ‘I don’t have time to date you. I’m going to law school,’” Strother joked. “Told him, ‘Just holler back later because I’ve got a career path I’m heading on here.”

Of her civic and charitable involvement, Strother points toward her grandparents.

“They played a vital role in my upbringing because mom had to work a lot,” Strother said. “They were always about giving back to the community so we were always involved in different projects growing up. Things like Habitat for Humanity, fundraising projects, going to nursing homes and volunteering, which I did a lot during high school. I liked that. My great grandmother lived in one so just to hang out with people at those places listening to all their stories.”

Faith as well plays in.

“Very important to me,” Strother said. “I try to reflect everyday on how I have been blessed beyond measure and, with everything I do, try to glorify God’s name and serve in that capacity to use the skills he’s given me. My grandmother always said you always have something to be thankful for and, if you start feeling sorry for yourself, to look around because there’s always someone who has it 10 times worse than you.”

Strother served as president of the Johnson County Republican Women’s Club and as a volunteer and board member of Crazy8 Ministries, Burleson’s Next Step Women’s Center and other organizations.

“Tiffany’s a woman of integrity, dedicated and committed and a person of humility and honesty,” said Jane Burton, former Next Step Women’s Center president. “She was always available to the center whenever we needed her.”

“She’s been a big friend to me personally and to our ministry,” Schwartz said. “She’s done so much and it’s obvious her servant’s heart for helping families and, especially children.”

Road to the bench

“I think that helped prepare me for being a judge,” Strother said. “Because I got to know the judges here and most of the attorneys in the area and, because of what I did, spent most of my days in the courthouse here, just on the other side of the bench.”

Citing health reasons, Bridewell removed his name from the ballot. Exercising a seldom-used Texas Election Code procedure the chairmen and precinct chairs of the Republican parties of Johnson and Somervell counties — the 249th holds jurisdiction over both — chose Strother from a list of interested candidates to replace Bridewell on the ballot.

Thrown into the deep end is how Strother describes her first months on the bench what with courts still catching up after COVID-19 temporarily kiboshed jury trials.

Strother laughed when asked if there’s a judge store peddling robes, gavels and such.

“My staff is amazing,” Strother said. “They asked my measurements and presto, the robes were there. They took a few weeks actually but luckily Judge Bridewell is about the same height as me so I used his old robes until I got mine in. But the staff, judges, everyone here has been amazing in helping me get acclimated.”

“Continuing education courses we have to take and [413th District Judge Bill Bosworth] told me to go on yourhonor.com to sign up for those,” Strother said with a laugh. “I thought he was messing with me and said, ‘Oh come on! What’s it really called?’ But, it’s really called that.”

On a more serious note, Strother has already heard a sexual assault of a child trial in which the defendant received a life sentence.

“Those, murder trials and things like that can be tough as an attorney and as a judge,” Strother said. “I took the long way home after that verdict just reflecting and hoping that at least we were able to help the victim through bringing the defendant to justice. But yeah, days like that, I just have to go home and decompress, go out running with my air pods in jamming to ‘80s rock.”

In a can’t-make-this-stuff-up-unlikely-made-for-TV movie-moment, one of Strother’s first duties as a judge involved presiding over an adoption.

“And wouldn’t you know, she was 5 years old,” Strother said. “That certainly took me back to when I was in her place and I admit, afterwards when I was alone, I teared up a little.

“Maybe I’ll hear back from her 20 years from now. Wouldn’t that be something?”

Meet this year's Times-Review Man and Woman of the Year, Roger Harmon and Tiffany Strother.