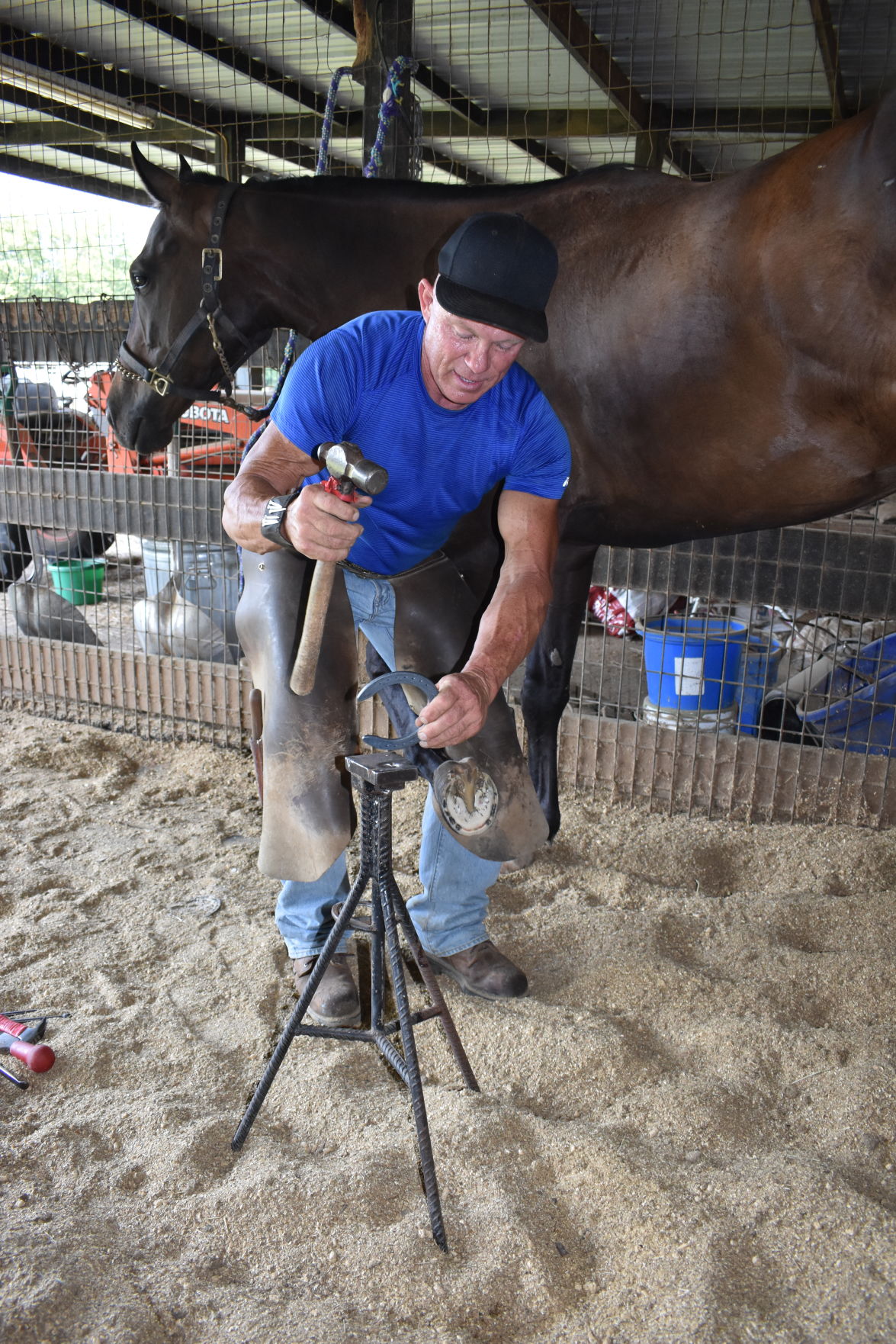 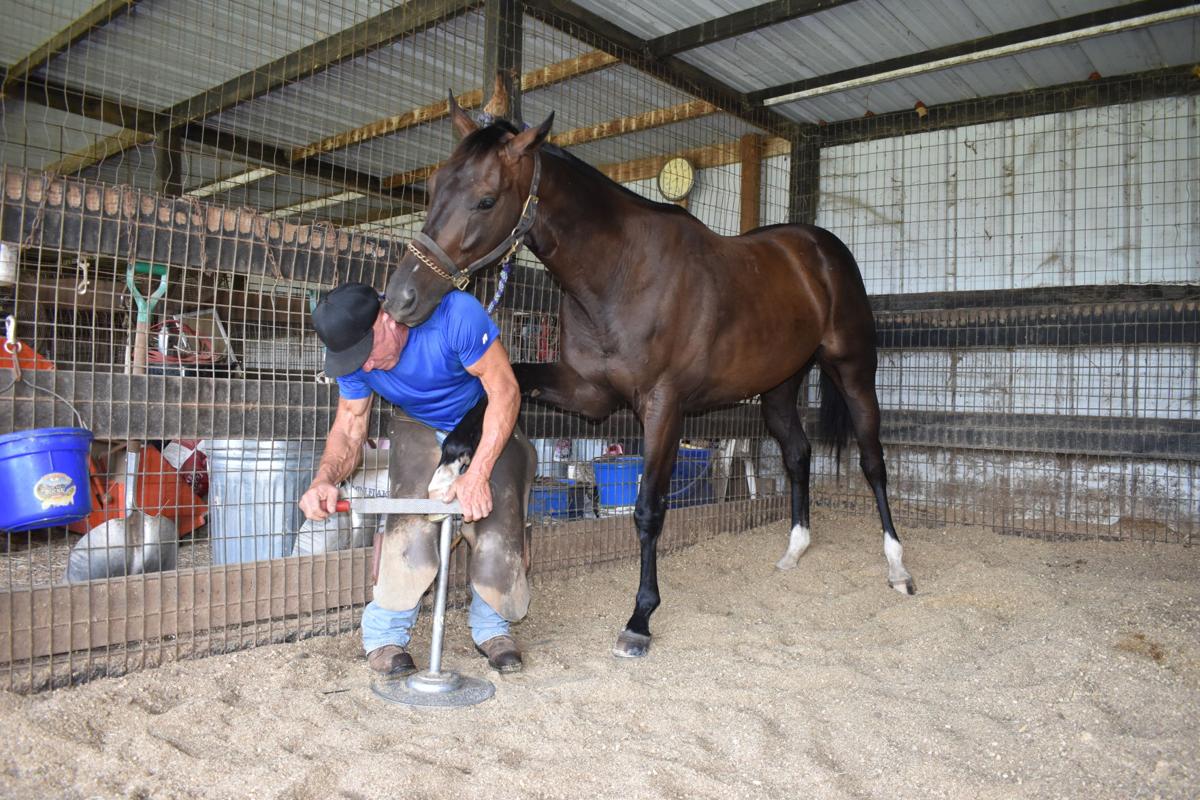 It’s quite possible that if you own a horse in Johnson County, you know Tim Garner.

Garner is one of the county’s last remaining farriers — a person who performs the fitting of horseshoes — in a profession he says is dying.

“With the lack of the amount of horse shoers versus the amount of horses all over the country, you will never run out of work,” he said. “You can do as much or as little as you want. Here soon, I hope to be doing a little less, but I will still be doing it.”

Garner’s decision to go into semi-retirement soon comes after 30 years of shoeing horses in Johnson County.

He’s always been involved in horses, even before he picked up the trade.

“By the time I was 12, I would get seven horses galloped for exercise before school started at $5 a head in the early ’80’s,” he said. “I thought I was the richest kid in school. Then after school, I’d go ride 10 or so more.”

Garner said what he really wanted to do was become a jockey.

“I was galloping all those horses, but when I was 15 they seen that I was going to get too big,” he said. “So all I ate was breakfast and drank tea the rest of the day, but I still grew.”

And still, he tried.

“Not having computers in those days, my dad told them I was 16 and I rode just a handful of races,” he said. “I won three races and one of those was put on by a local person — Dr. Robert Shaw. I still have connections with him because I shoe his horses. I’m proud of that.”

“We used to race out at Trinity Meadows and he could really ride those race horses,” he said. “And he was a really good bronc rider, too.”

But it wasn’t long before Garner finally realized he had grown too big to become a professional jockey.

“I stepped back and said, ‘Well, I want to make a living with the horses,’” he said. “The only people I would see doing that were the jockeys, and since I couldn’t do that all I saw left to do was the horse shoer and the veterinarians.’ Well, I didn’t like school too much so I knew then I was going to be a horse shoer.”

When he was about 19, Garner would work with a man in the middle of the day to learn the trade.

“I’d keep galloping horses in the morning and then I’d [shoe] one or two horses every day,” he said. “I was going to go to school to learn at first, but the horse shoer said to just work with him because I would have to do that anyway. He never said anything was a bad job. He always built my confidence up. I can just imagine how terrible I was. He was always just real positive.”

When the man became crippled, Garner said he gave him his biggest barn and allowed him to take over.

“From there, I have always worked,” he said. “This is certainly a hard job, but I like it and it’s not stressful because it’s just labor. When you do a job, especially to take care of people’s animals, they’re appreciative. A lot of jobs you are just a number or are in a factory or something. So, it makes me feel good, what I am doing.”

Mike White of Burleson has been using Garner to shoe his horses for over 10 years.

“I wouldn’t trust anybody else with my horses,” he said. “I have some that are hard to deal with, but it is no problem with him. My horses probably like him more than they like me. And it’s not just about the horses; he cares about the families, too. He comes to my kids’ baseball games.”

The knowledge of how to trim feet and apply shoes is a skill most horse owners do not have, so they call on Garner.

“If you have a horse just out in the pasture without any shoes on they will live, but their feet get pretty rough,” he said. “As a horse owner, it is good maintenance to keep them cut — they grow just like fingernails do.

“Old horses benefit from keeping shoes on them because it is a stress relief. On a young horse, you may not see the benefit versus the cost of it. But older horses sometimes need help keeping their weight up and these shoes will help keep it up a lot easier. Most of shoeing is for horses that are doing some kind of competitive event.”

“I did one yesterday that just won $1.9 million,” he said. “But, I do the same job on those kids’ horses as I do those million dollar horses.”

Garner said if he had to learn everything all over again at 51 years old he probably wouldn’t be able to.

“There is more to it than just learning how to do it,” he said. “It’s being able to get under the horse and handling the horse while doing art. At first, it is really hard to figure that out. You’re getting jerked around quite a bit and it gets pretty rough.

“Now, no matter how they act, I can do it without myself being stressed. I can stay relaxed if they are hopping up, bucking, kicking or whatever. You won’t see me really straining much, but that took a long time to be able to do that.”

Garner said he remains inspired by a man he met when he was younger.

“My hero, last year at 90 years old, was still shoeing horses over at the race tracks,” he said. “I remember back when he was probably in his late 60s, because I was probably 20 something, I thought man he was old to be shoeing horses.

“I asked him why he was shoeing horses and he looked at me and said, ‘Because when I quit I will be an old man.’ I didn’t think nothing about that then, but as I get older I realize what he was saying. It kept him moving all the way to 90. I don’t know what’s come of him now, but horse shoeing kept him from being an old man.”

Because there are not many farriers left in the business, Garner said he has tried to send one person each year over the past couple of years to horse shoeing school.

“I’m not real good at explaining, but they can go to school and then come learn from me to better understand,” he said. “I’ve had one man really prosper. At the time he was 41 and really tall. I thought there was no way he was getting under a horse, but he would watch so close and prayed every day. He went with me for a good full year and gradually got his own business going at 65.”

With technology changing the way jobs are done every day, Garner said horse shoeing has been the same in all the years he’s done it.

“One thing about shoeing is that the only change since the 1800s is the quality of the shoes we are able to buy instead of having to make them,” he said. “All the work involved is the same since then. There hasn’t been any kind of tool made that could make it simple. It’s every bit hand done just as it was in the 1800s.”