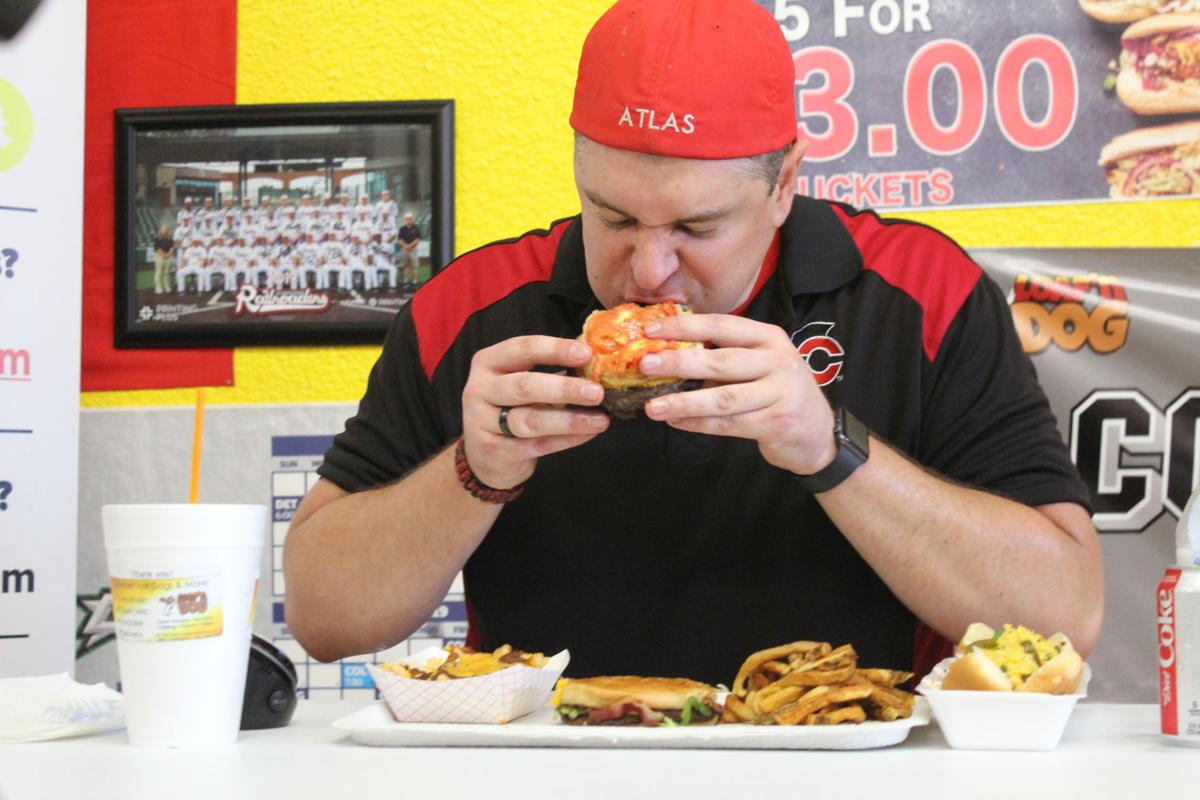 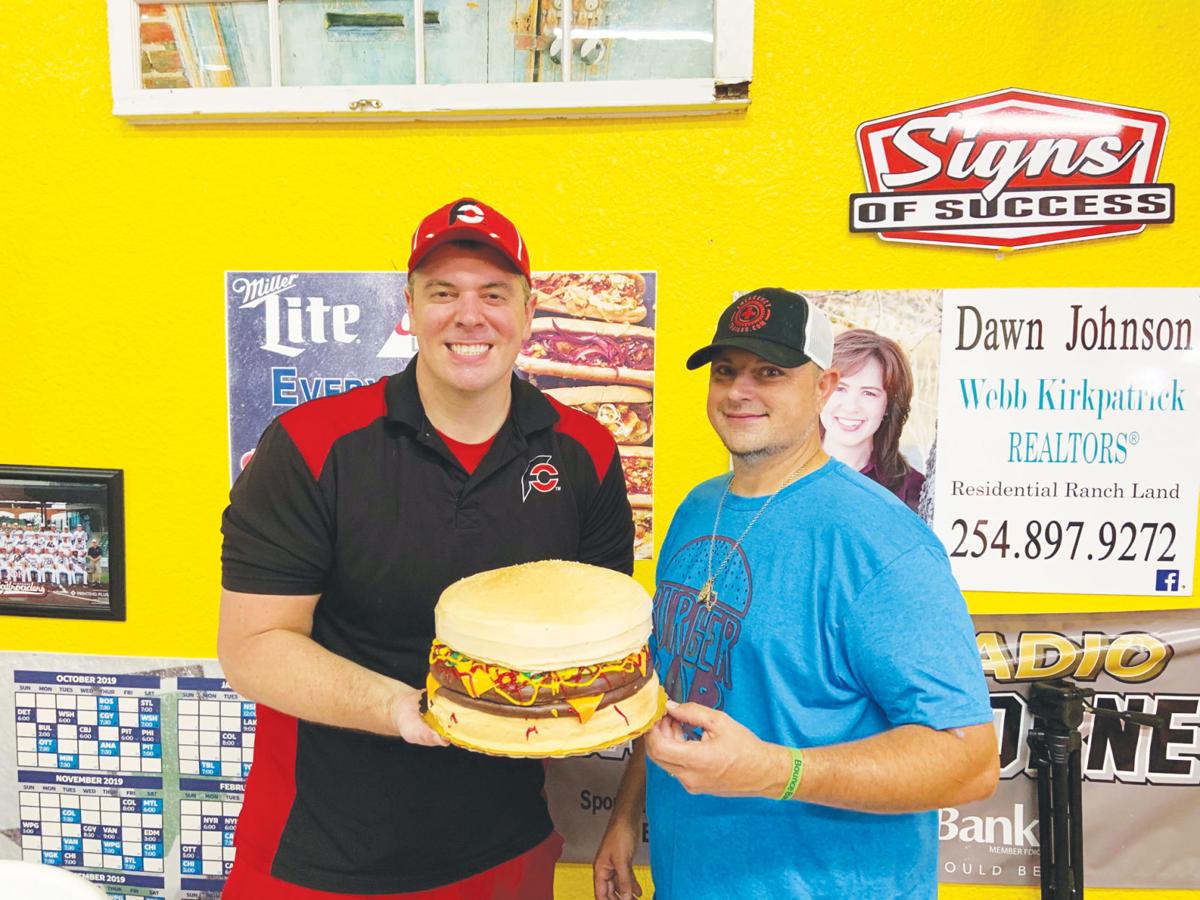 A ripple of double takes abounded throughout the dining area’s throng as Santel, going for food challenge win number 830 with 25 minutes on the clock, scarfed the spread laid out by Loaf’N Dog owner Casey Waits in exactly 8 minutes and 30 seconds.

For his effort, Santel walked away with $35 worth of free food and a “sweet” Loaf’N Dog T-shirt.

Santel’s shindig of digging in stalled unexpectedly early on. Midway into Santel’s filmed introduction of the event to this million-plus YouTube and Facebook followers Loaf’N Dog’s burglar alarm blared temporarily halting proceedings. That situation sorted, Santel relaunched into his spiel only to be cut short by a dispatcher’s voice emitting from a fireman’s walkie talkie. Several of the Cleburne Fire Department’s finest were on hand both to take in Santel’s feats of daring devouring and, one assumes, just in case he exploded or somesuch.

Santel joked that he’s used to crying kids or maybe the sound of a passing ambulance siren but had never been interrupted by a burglar alarm until Cleburne.

“That’s a special burger created just for this event,” Waits explained afterward. “We have what we call the Beast Challenge at Burger Bar, but that’s just a triple burger.”

Santel asked Waits what the four-patty behemoth burger was called.

“We haven’t thought of a name yet for it,” Waits replied.

Santel quickly christened it the Atlas Burger, that same word prominently featured on the back of his trademark baseball cap.

Such distraction out of the way, Santel commenced his pre-game routine akin to that of a football player or boxer about to enter the ring. With that, Santel kneeled in front of the table, twisted the brim of his cap — in a move inspired by Sylvester Stallone’s “Over the Top” movie —around to the back of his neck, made the sign of the cross, muttered a quick prayer, awaited the official timer’s signal and dug in. The burger went first, and fast.

A fury of flying hands, fries and hot dogs paused here and there for gulps of water followed as Santel chowed down the lot without breaking a sweat.

The crowd’s roar of encouragement taxed the limits of frenzy toward the end once the strawberry shake was all that stood between Santel and victory.

Once, twice, thrice Santel tipped the cup and the shake that never stood a chance was history. Victory secured, the crowd went wild.

Santel said the day was extra special being his 34th birthday and, thanks to the COVID-19 pandemic, his first bout of competitive eating since a January appearance in Italy.

“So, it’s great to be back at it,” Santel said. “Thanks to my friend Casey for having me out here. This is my first time in Cleburne.”

Invited to do so by Santel, the assembled crowd made short work of the cake. Attendees from near and far — well, Fort Worth and Dallas far — also lined up to purchase Santel T-shirts, bears, comic books and autographed pictures. Fans posed with Santel for selfies, shared their own big eating stories and reveled in their hero’s earlier tales of adventures in gastronomy.

A Venus man and his two sons said they’ve long been fans. Another woman said she and her husband, both big fans, had no idea Santel was going to be in Cleburne until just before his scheduled appearance.

“We were in our swimming pool when we found out,” the woman said. “My husband jumped out and said, ‘We’re going right now.’ I’ve never seen that fat boy move so fast in all my life.”

Santel told Waits he was thrilled by the turnout, adding it was larger than he expected.

“That’s just how we roll in Cleburne,” Waits replied.

Santel said he was always a big eater. At one point he gained 100 pounds to play football. His professional eating days, however, began a decade ago shortly after he won a body transformation contest sponsored by Men’s Health Magazine.

“My buddy, as a way to celebrate, invited me to eat an 11-pound, 28-inch pizza with him in our hometown of St. Louis in a contest,” Santel said.

Santel agreed. He and his friend won the contest and bagged $500 for their trouble.

Another win, that one also involving pizza, and another paycheck followed in Missouri and the rest is history.

“I like to have my body in an upright position as far as my core,” Santel said. “If you sit you’re kind of restricting a little bit the bottom half of your stomach. If you watch the hot dog competition on the 4th of July you’ll notice those people standing and jumping around. It’s good to move the body around. Because, when you’re really full, all that food going down into your stomach is like Tetris. That’s also why I have a Diet Coke on hand. I didn’t really have to have one on this [contest], but the carbonation helps me burp up all the air bubbles.

“And, if I’m standing, I’ll be too far away from the food, which makes a bad video and not really a good image quality. So, by kneeling, I’m in a seated position for the camera, but my body is also upright and I’m able to move better.”

Santel recalled his 27th birthday when he visited 27 restaurants and ate whatever they gave out free to people on their birthdays.

“Denny’s and a whole bunch of fast food places mainly,” Santel said. “It ended up being almost 17,000 calories. The whole video of that took 16 hours to film.”

Another time he tackled 78 food challenges in as many days sometimes doing two a day to allow for an occasional day off.

“I take a couple of months off after things like that in order to lose the weight,” Santel said. “Do a lot of cycling and lifting to get the weight off in addition to a consistent lower calorie diet.”

Having dined competitively in all 50 states, as well as 37 countries, Santel said he’s bound and determined to mark Africa, South America and Antarctica off the list though he admits that the logistics of the last locale might be tough to work out.

Either way, Santel has his work cut out for him and the clock is ticking.

“I’m actually in the process of becoming a registered dietician,” Santel said. “In 2022 I’ll be retiring from all these food challenges. So, at that point, I’ll be the No. 1 followed dietician in the world. So I’ll be transferring all my social media over to helping people better understand nutrition and weight management.”

As if suddenly realizing that’s more than a year away, Santel tucked into a hefty slice of his birthday cake, which he washed down with a with a bottle of Shiner Bock Beer.

One fan quipped he was gob smacked that Santel was still hungry after plowing through Loaf’N Dog’s All-American Challenge.

“Ah, that’s been over an hour ago,” Santel said.