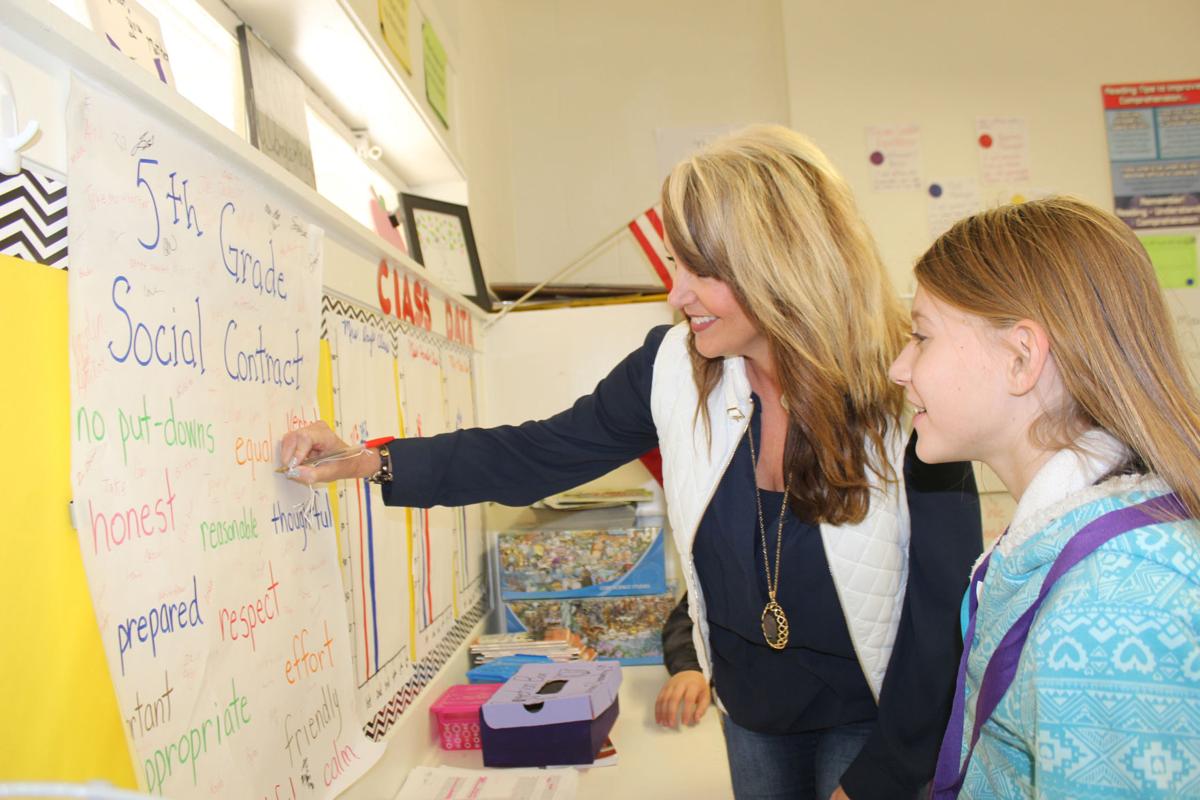 Coleman Elementary School Principal Marla Roth signs the social contract developed by students and their teacher, during a classroom visit. Roth is leaving the principal’s office to begin a new journey. 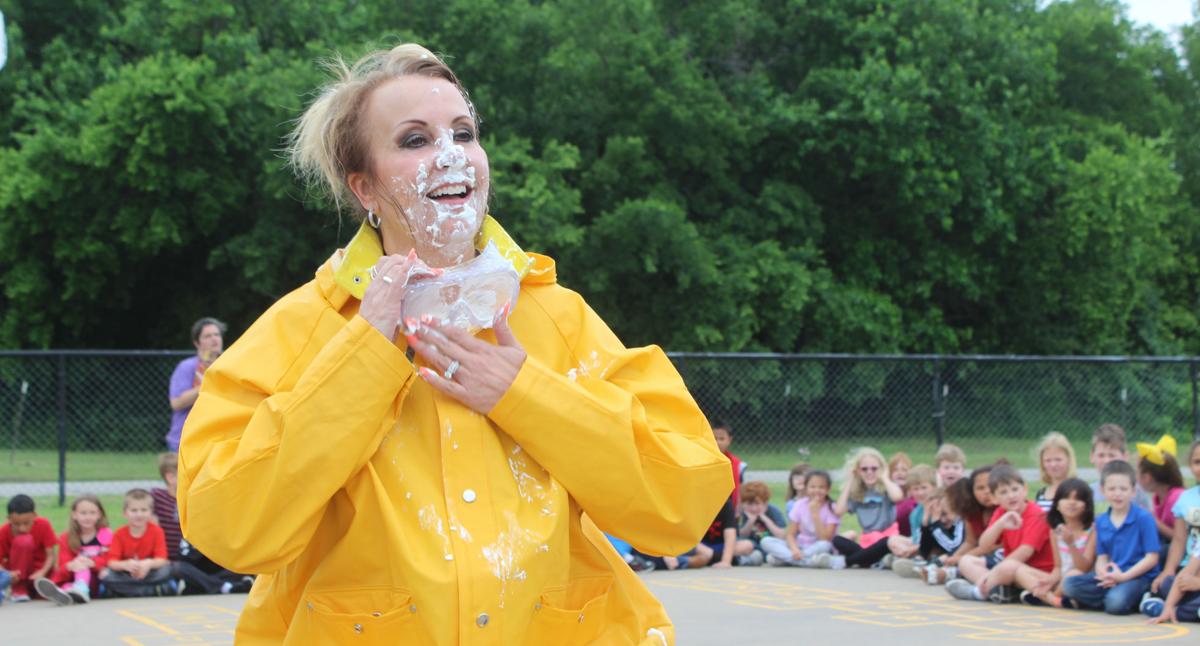 Marla Roth smiles in the aftermath of a pie in the face administered by a student who was the top seller in the school fundraiser. 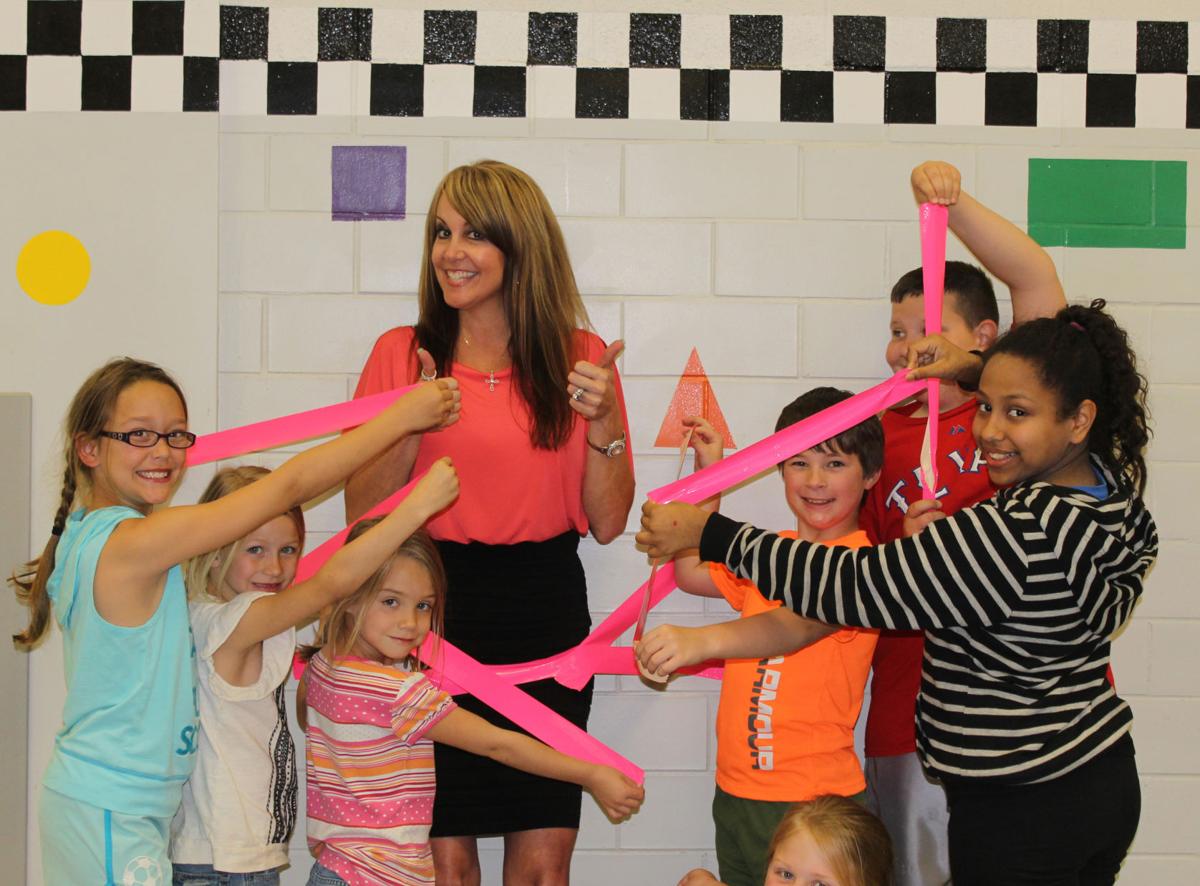 Marla Roth gives a thumbs up in anticipation of being taped to the wall by the student body, in celebration of their performance on the State of Texas Assessment on Academic Readiness test. 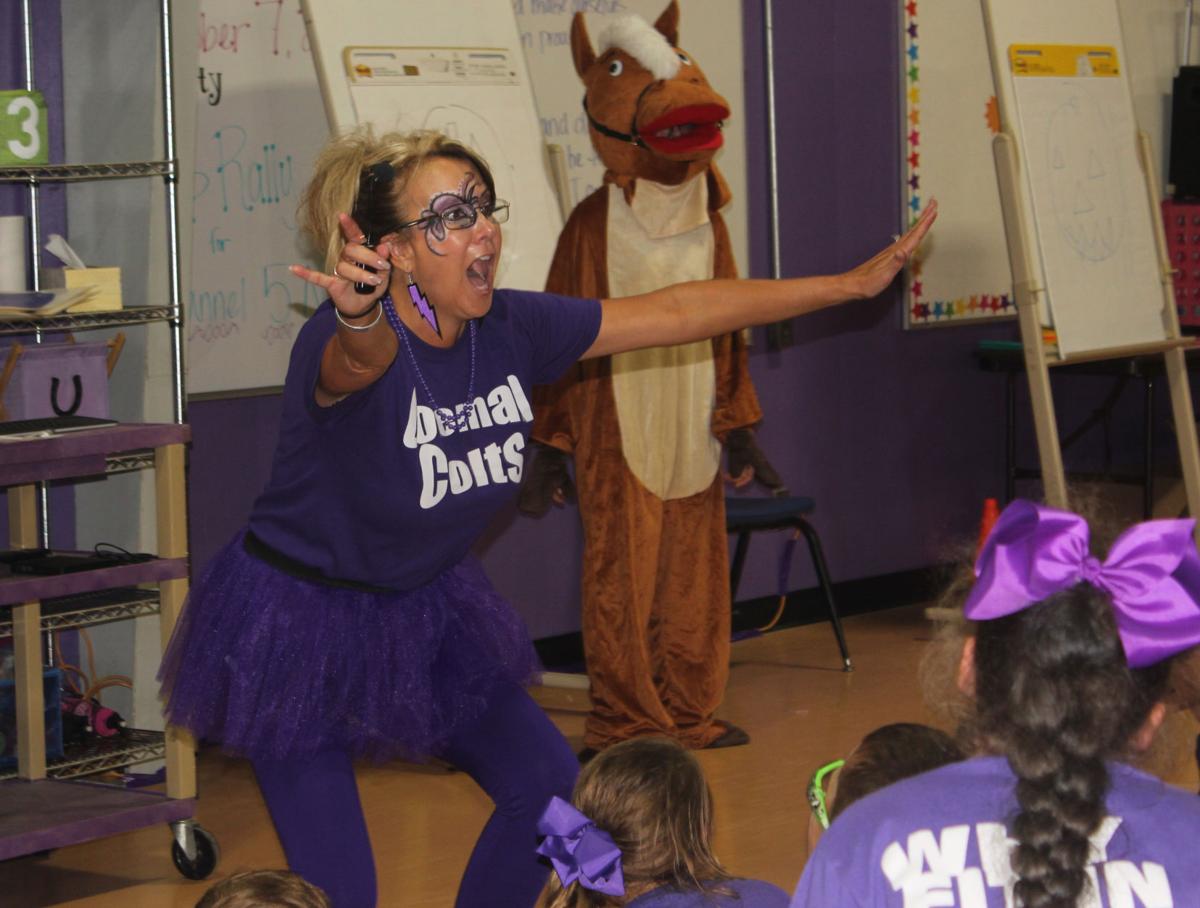 Marla Roth, decked out in the school colors, leads a campus pep rally during a visit by KXAS/NBC 5 for a “Brag About Your Schools” segment.

Coleman Elementary School Principal Marla Roth signs the social contract developed by students and their teacher, during a classroom visit. Roth is leaving the principal’s office to begin a new journey.

Marla Roth smiles in the aftermath of a pie in the face administered by a student who was the top seller in the school fundraiser.

Marla Roth gives a thumbs up in anticipation of being taped to the wall by the student body, in celebration of their performance on the State of Texas Assessment on Academic Readiness test.

Marla Roth, decked out in the school colors, leads a campus pep rally during a visit by KXAS/NBC 5 for a “Brag About Your Schools” segment.

After six years of leading the Coleman Colts, Principal Marla Roth is saddling up for a new journey.

Roth devoted a great amount of time, prayer and thought in her decision to ride in a new direction. She will now be spending more time with her husband, who travels frequently.

“My husband has a rail terminal business and does quite a bit of traveling,” Roth said. “I want to be with him and help him in his pursuits. He supported me when I went back to school to get my master’s degree, and throughout my career as a teacher and principal. Now it’s my turn to support him — to be his cheerleader.

“I prayed about this decision and thought about it for more than a year. I love my job and everything about it. But I felt it was the right time to do for him, and that’s what I chose to do. This has been hard, but when you make a decision and are at peace, you know it’s the right thing for you.”

She is leaving behind some very deep hoof prints, with Coleman being the sole CISD campus to be named a Capturing Kids’ Hearts National Showcase School for three consecutive years. Coleman also holds a “B” performance rating in the most recent Texas Education Agency accountability ratings, along with three Distinction Designations including top 25 percent percentile in academic growth, closing the performance gap and Academic Achievement in science.

Despite being the campus leader, Roth gives all the credit to her teachers and staff.

“The staff at Coleman has made everything possible,” she said. “When Capturing Kids’ Hearts was initiated by the district, our staff embraced it and passed it on to the kids — which they then embraced. I just read a quotation which defines our team: ‘wherever you are, be all there.’ The Coleman staff is all there. Coleman teachers teach.”

It was a move in her husband’s work that brought Roth to Cleburne. She began her career in education in 1994 in Abilene as an elementary teacher. She was inspired and encouraged to choose the teaching profession by her uncle, who was an assistant superintendent with Fort Worth ISD.

“I had a lot of great teachers growing up, but it was my uncle who inspired me,” Roth said. “He felt I would be a good teacher. I admired him, and listened to him. He was also the one who encouraged me to go back and get my Master’s in the hopes of becoming a principal.”

She started out as a first grade teacher, experiencing early on the joy of seeing her students become readers.

“I loved teaching kids how to read,” she said. “Sitting down with them, working with them, then seeing them read for the first time was always amazing. After several years, my principal called me in to tell me I was being moved to fifth grade to teach science. I was shocked, but when I got in there and loved it. I then went on to became an instructional coordinator at the campus.”

In 2012, when her husband’s job took him to Fort Worth, Roth applied for a similar instructional position at Wheat Middle School. Several months later, she was named an assistant principal at Wheat.

“My goal was to become an elementary principal and that was a big step in that direction,” Roth said. “I loved working with the students and staff at Wheat. It was a great experience for me.”

Roth met her administrative goal in 2014 when she was chosen as the campus leader for Coleman Elementary. She devoted that first year in the principal’s office to getting to know the Colts.

“When you set a goal, then reach it, it feels good,” she said. “But the only way I got there was because of the people who helped me and believed in me. In my first year at Coleman, I wanted to get to know the staff, the parents and the students. I sat back and listened, to learn what made Coleman great and what I could do to keep and extend that greatness.”

Coleman Assistant Principal Alyce Bell has worked alongside Roth throughout her eight years in Cleburne, beginning with their administrator days at Wheat Middle School.

“When she became principal at Coleman, she asked me to be her assistant principal,” Bell said. “Marla wanted Coleman to the best school it could be. She accomplished that in leading by example and encouraging her teachers to be leaders among their peers and pushing them beyond their comfort zones.”

“With her leadership, Coleman was the first CISD campus to be awarded the CKH National Showcase School Award,” Bell said. “Marla firmly believes in seeing the positive in students, parents and staff. She believes that family comes first and she supported our staff through many life-changing events.”

There were some moments and challenges in Roth’s years at Coleman, including some very hard ones. Staff and students stood strong for Brody Nelson, from his cancer diagnosis in the third grade, to his passing last August as a member of the Coleman fifth grade class. The same holds true for two staff members who are battling cancer.

“We experienced sadness, as a campus, in Brody’s passing after a very courageous battle,” Roth said. “In all these situations, our kids have wanted to help, support and give. They have received some life lessons through this, guided along the way by an amazing group of teachers.”

Coleman’s 2019-2020 Teacher of the Year, Libby Dill, says Roth’s influence and efforts have created a true sense of unity within the campus for students and staff alike.

“One reason we have such unity on our campus is because of Marla, and Mrs. Bell,” Dill said. “Marla made sure we were following the tenets in Capturing Kids’ Hearts, in being the best for kids — and each other. This is the best school I’ve been with, in 19 years of teaching, in terms of teachers working together, camaraderie and relationships. Marla would involve us in everything, including campus decisions. She wanted our opinion, our input — she wanted to know what we thought. She also showed us the importance of being united in what we are doing, because ultimately it’s all about kids.”

Dill also points to Roth’s desire to be there for the Colts — no matter what it might take.

“You never knew what she would be wearing on the days we were having special events or activities,” Dill said. “She would be the ‘Cat in the Hat’ on Literacy Day, wear a rabbit costume for Easter, dress up for Storybook Character Day. She wanted to be involved in what the students were doing. The kids came first and she didn’t care if she looked silly — she was there for them. We’re really going to miss her and the joy she brought to all of us. She made Coleman a happy place to be.”

While riding out of the Colt corral is hard, Roth is proud in knowing what awaits the next campus leader.

“Whoever takes over is going to see they have arrived at somewhere wonderful,” she said. “The help they will receive from teachers, staff, students and parents is incredible. I also know the district will make the right decision in choosing a principal who will do the right thing for Coleman.

“This will be a whole new journey for me. I kept my grandson, who is 19 months, the other day. He brought some books with him and we read and looked at the pictures. It was so special doing that with him, and it brought back the impact of what we can do in working with kids. I will cherish my years at Coleman and all the wonderful people I have worked with. You know what they say, ‘once a Colt, always a Colt.’ That’s how it is for me.”