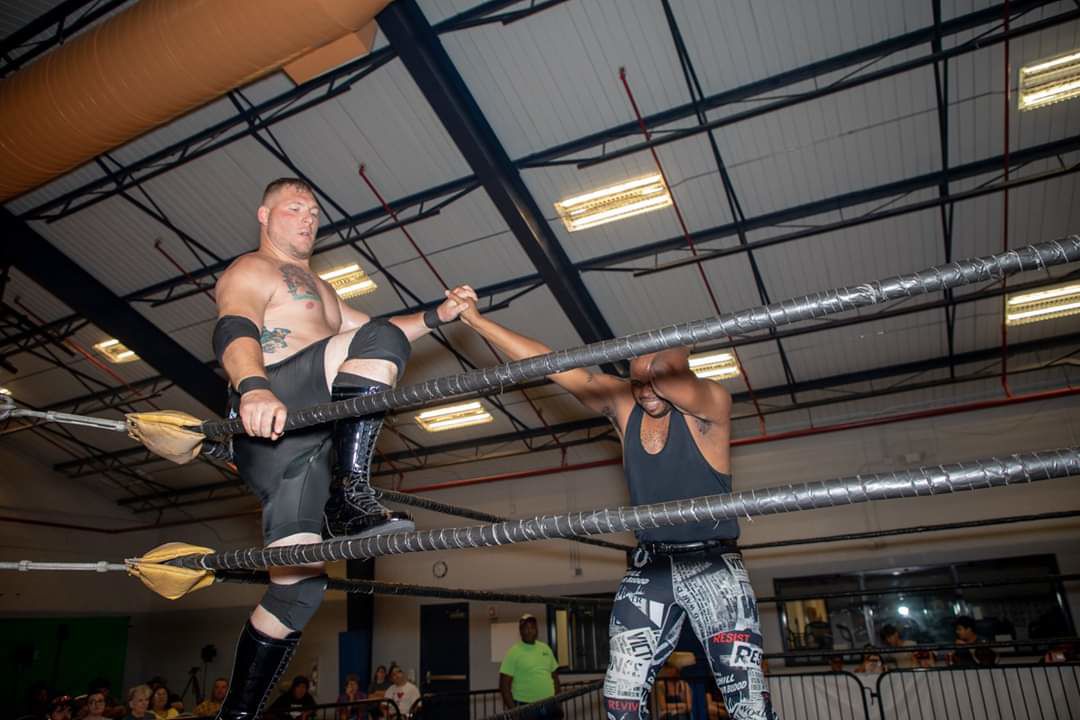 The Oklahoma Cowboy, left, prepares to deliver a top rope maneuver to The Enforcer Havok during an Advanced Pro Wrestling match. 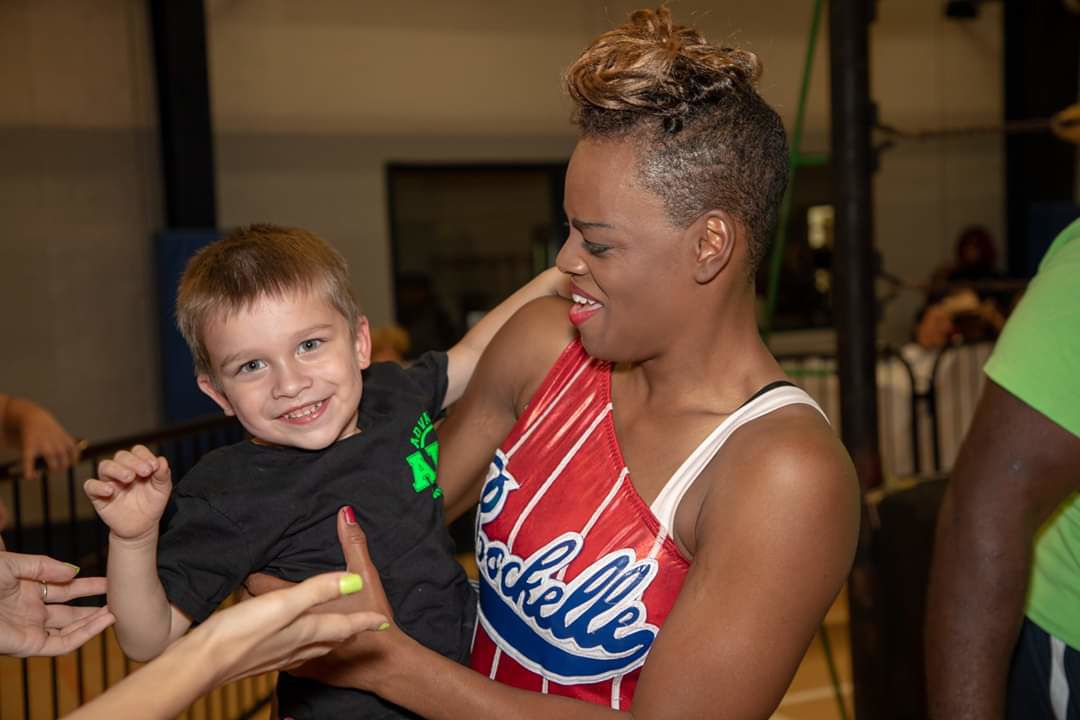 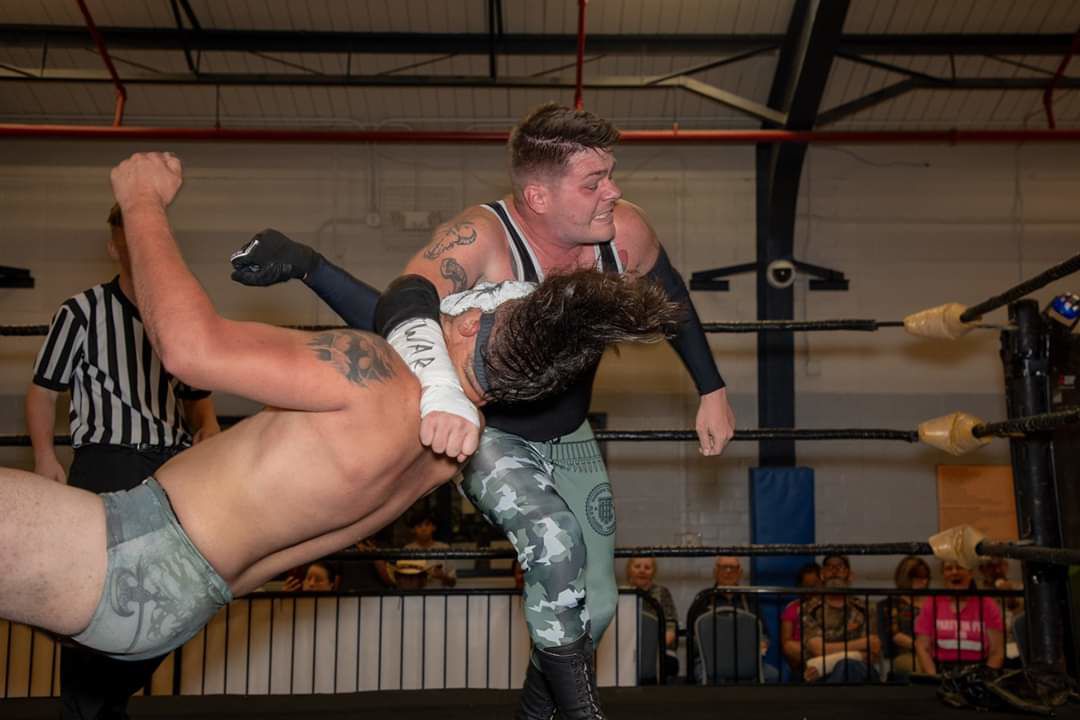 The Soldier Xander Slade, right, delivers a devestating clothesline to Mike Freska in a hard-fought battle at Advanced Wrestling Pros.

It was career day in 1980-something when Jacob Emory of Cleburne learned about something that would spark a lifelong interest.

“I was going to Alvarado High School for a couple of years, and one day we had guests that were professional wrestlers,” he said. “I was ready to get to that class and ask them questions and find out as much as I could. I found out they had a school — through New Age Wrestling in Cleburne — and I signed up.”

“I’ve been a heavyweight champion for numerous companies, and a Texas champion and tag team champion in numerous companies,” he said. “I’ve worked anywhere from 30-50 promotions in my span of 30 years doing it, in almost every state in that south that you can wrestle in.”

Emory said he enjoys the physicality of professional wrestling.

“I played sports — football and basketball,” he said. “But I think I really just like the showmanship of wrestling. I learned everything I could about it.”

He said how much goes into the production of a wrestling show is what has impressed him the most.

“I think that the illusion, or the surprise factor, is the best thing that intrigues people,” he said. “It’s not like watching professional football where a team is heavily stacked against a team that is not heavily stacked. There, you usually know who will win. In wrestling, you get these match ups like a David and Goliath, and be surprised that David wins.”

Emory said there are many others who enjoy pro wrestling as much as he does.

“When I started out here in Cleburne, they were averaging pretty decent crowds every weekend,” he said. “There is still a big following now as there was 15 years ago. I had a show Jan. 18 and it was a 200-plus crowd at the Booker T. Washington Recreation Center.”

On Feb. 8, Emory will open Advanced Pro Wrestling at the Nolan River Mall in Cleburne.

“I just joined the Cleburne Chamber of Commerce last month, and we are pretty involved in the city and community as much as we can be,” he said. “We are having our ribbon cutting Feb. 5 and then open Feb. 8 with our first match up.

At Advanced Pro Wrestling, Emory will also be training pro wrestling to ages 15 and up.

“On Friday nights we will have a teen night, and we will also have martial arts training starting in March,” he said. “I want this to be a place that parents can drop off their kids, know that they are going to be safe and have fun at the same time.

“We will have an off-duty officer there and have all the emergency contact information from their parents. Growing up here, my parents used to be able to drop me off at a skating rink and know that I’d be OK. We don’t have that anymore.”

“We have a weekly podcast that we do,” he said. “It’s called, ‘The Squared Circle,’ and we will have guests — the wrestlers — and talk about upcoming events. I’ve been a part of Cleburne for a very long time, and what I’m putting into my business at the mall is not just for wrestling, but it will add a lot of stuff to the community.”

Sorry, there are no recent results for popular images.