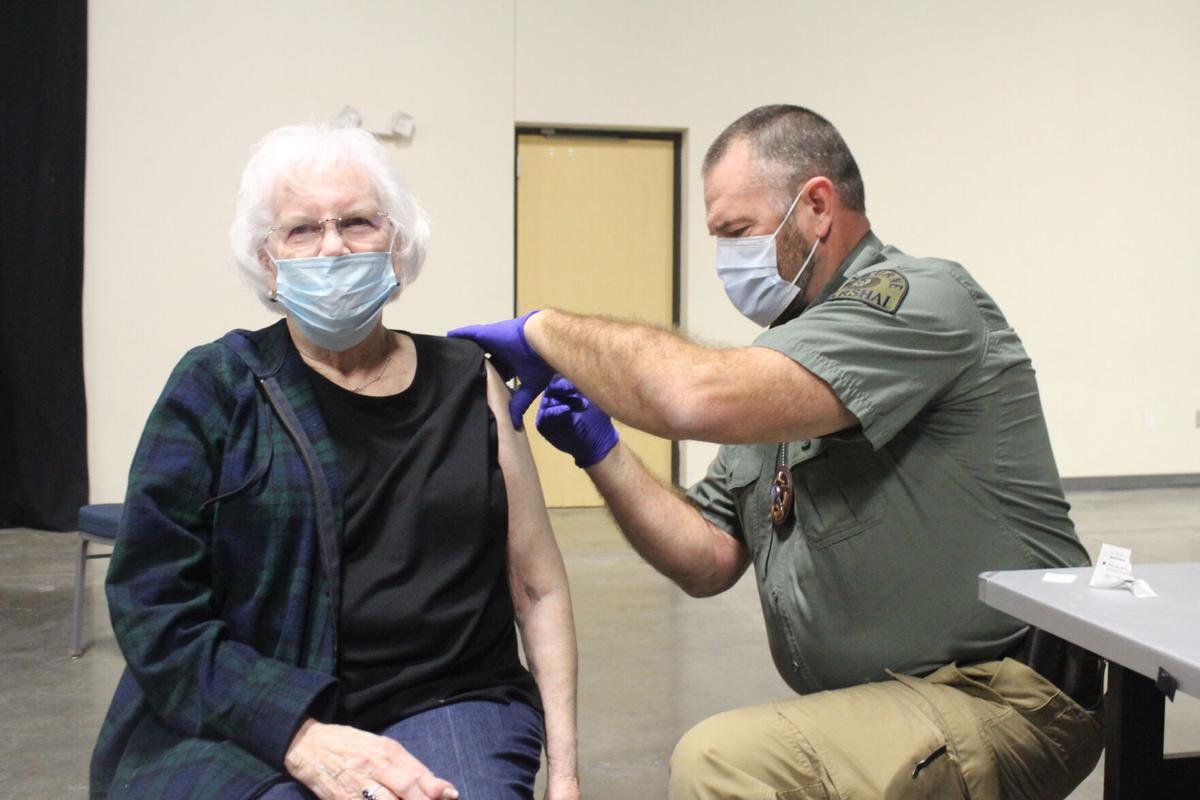 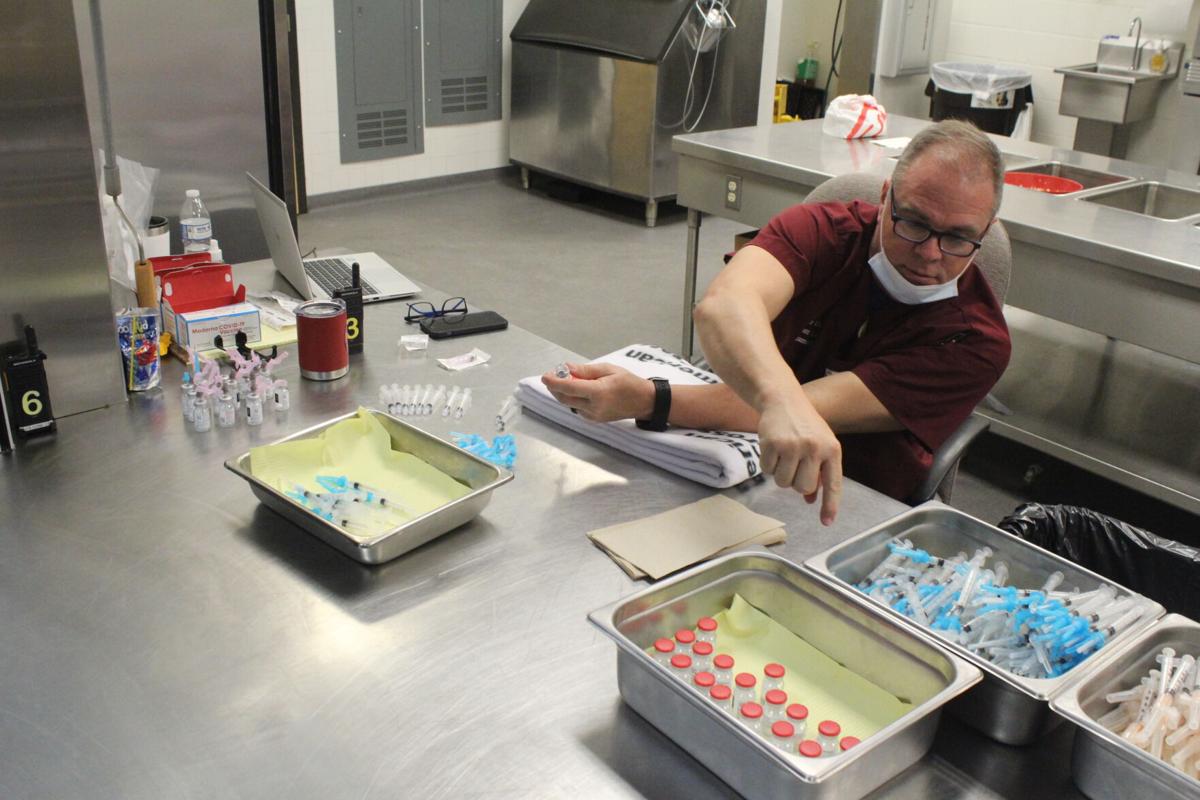 There is light at the end of tunnel for Johnson County residents eligible to receive the COVID-19 vaccination.

Though last week’s winter storms delayed the opening of a vaccination hub at the Cleburne Conference Center, it’s open in full force this week.

Jo Ann Graham of Cleburne was one of the first to receive her shot this week.

“I just walked right through the process this morning and got my shot,” Graham said on Tuesday. “It was pretty quick. I did have about a week and a half wait once I got on the list and they contacted me to come in today.”

Graham said she’s thankful to finally get the shot.

Sherry Osburn of Cleburne, was able to register Monday morning and got her shot on Tuesday.

“Oh my goodness! It was awesome,” Osburn said about the entire process. “Couldn’t be any better. Got in today and only two people in front of me.”

“If the state ends up with extras they’ll divvy them up among the hubs,” he said. “I think there’s 90 hubs around the state now, maybe more.”

Cleburne’s hub remains the only one in Johnson County. Vaccinations are being given out in Burleson as well, at a site run by the city.

CFD was among the first to receive vaccinations in the state. In January, they received 500 vaccinations for 1A personnel and have since added 1B, which is people with health conditions, or anyone 65 and older.

“What we’re trying to do is get as many people vaccinated as quickly as possible and efficiently because we still have our other jobs to do,” Lail said.

Lail asked that Cleburnites be patient as CFD tries to get through as many vaccines as they can each week.

“We know there’s a lot of people who want the vaccine but at 1,000 a week it’s going to take a while,” he said. “We’re continuing to try and we’re going to vaccinate as many as possible. The system out here is clipping along and moving very efficiently but there’s still far more demand than supply.”

Plans to push the vaccine out to all Texas is in the works. Right now the timeline calls for mid- to late summer for everyone to be eligible.

Mega-sites are opening in cities like Dallas and Houston to quickly vaccinate larger amounts of Texans.

About 95 people were vaccinated within the first hour on Tuesday morning, Assistant Chief Keith Scarbrough said.

“We’re hoping to shoot for 2,000 vaccines a week eventually,” he siad. “That would be easy for us to accomplish provided we could get enough vaccines. Everybody’s got their routine down and it’s running pretty smoothly.”

The plan for CFD’s hub is to remain open as long as the state deems necessary.

“Our minimum commitment here is going to be three months I think,” Lail said. “I don’t know for sure because the state has talked about trying to get away from the hub concept as soon as every doctor office and H-E-B pharmacy has vaccines we don’t need to do this anymore.

“So it will be our commitment to the hub will be directly related to how fast vaccines get to other providers and people have other options. The state will tell us when they’re going to start de-commissioning our hub.”

Signing up for a shot

Sign-ups are available on Mondays for that week’s allotment of vaccines.

“We will decide depending on the shipment,” Lail said. “If it’s 1,000, we’re probably going to do Tuesday, Wednesday.

“Sometimes we might have to do a Wednesday, Friday. But we’ll let people know and when you make your appointment it tells you what days are available.”

“The reason we do registration every Monday is that we’re not doing that huge, long waiting list,” he said. “We’re doing a list per week. So on Monday, it’s a new list.”

This week, CFD booked 1,000 appointments and made a list of 100 people for call-backs in case they had a cancellation.

“One of the things we never want to do is make an appointment for a vaccine that we don’t have in hand,” Laid said. “Because I never want to cancel anybody.”

If you are on multiple waiting lists and end up getting the shot somewhere else, call the hotline or email fire@cleburne.net so they can cancel your appointment.

“I tell everybody get on as many lists as you can and take the first shot you can get,” Lail said. “You can get your follow up anywhere.”

In an assembly line type of efficiency, the department can move rather quickly, with an average of two shots per minute.

“I really think it works well because every person only takes care of one phase, registration, cards, shots,” Lail said. “That way you don’t have people trying to do everything. Everybody takes care of their part and it works very efficiently.”

About 12-15 people are working at the hub, in addition to the people manning the hotline, Scarbrough said.

The appointments are in 30-minute increments, and you can come anytime in that 30 minute window.

“It gives us more of an ebb and flow,” Lail said. “Which is good though because it gives us a chance to draw vaccines and get things ready for the next group.”

Lail asks that those getting the shot print or screen shot their QR code to make check-in easier.

Cleburne City Marshal Clint Ishmael said after the shot, residents can rest and make sure they don’t have any adverse reactions.

“Go sit for 15 minutes,” he said. “You may have some soreness but that’s from the medication, not anything else.”

If you feel bad after the shot, take some Tylenol or Ibuprofen, he said.

“It’s just the body’s reaction to the vaccine and the immune response it is soliciting.”

After the first shot, you must do the second one within 28 days.

“We’ll call and let them know and give them a chance to sign up for the second shot,” Ishmael said. “You’ve got some leeway within six or seven days of that date. 28 days is your target.”

The waitlist for COVID-19 vaccines in Burleson is open for sign-up.

This is for first doses in Phase 1A and 1B only. If you are looking for your second dose this waitlist does not apply to you.

If you’ve already signed up on the waitlist, do not sign up again. You will be contacted this week to set up your appointment. If you are unsure if you are on the waitlist, you can call 682-312-2780 to confirm.

The waitlist is created when the city knows when they will be receiving the next shipment of vaccines or if there are cancellations.

If you are signed up on the Tarrant County Health Department’s waitlist you can still sign up on this one and we encourage you to do so. The registration link can be found online at burlesontx.com/vaccine.

If you received your first dose from Burleson Public Health and your second dose is due this week, the city will communicate with you via email to schedule your second vaccine.

The Burleson Public Health COVID-19 testing site will be officially closed after Friday. To find other testing sites near you, visit the Texas Division of Emergency Management website.