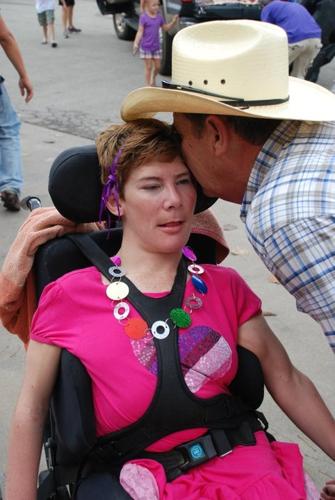 Brittany Morris, left, receives a kiss from her father, Gary, at a Saturday fundraiser for the family. 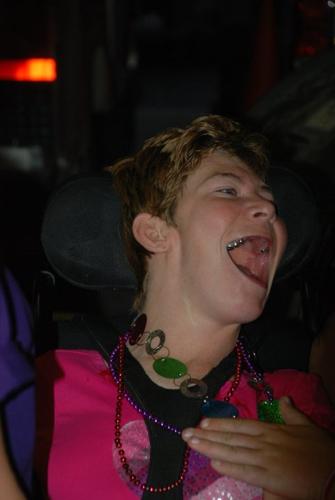 Brittany Morris at a Saturday fundraiser for the family.

Brittany Morris, left, receives a kiss from her father, Gary, at a Saturday fundraiser for the family.

Brittany Morris at a Saturday fundraiser for the family.

Before last Saturday, Brittany Morris’ future was questionable. At age 29, Morris, who has cerebral palsy, has outlived her life expectancy by 17 years. The state recently implemented costly sewage and bathroom requirements for the Morris family home to meet her physical needs. Without financial assistance, Brittany would have to leave her family home and move to a state-approved facility designed to accommodate the needs of persons with cerebral palsy.

The Benefit for Brittany, which took place Saturday, far exceeded any expectations by those who put the event together and those who donated money.

Strickland and several friends of the Morris family who called themselves Team Brittany started the event in a living room one night, and then on a Facebook page. From there, it just “blew up,” they said.

Florence Keller, a family friend, wrote the Facebook post, stating that she knew of a family in need and asked for people to help.

No names were mentioned until the event grew larger than anyone had imagined.

“We all love Brittany. I mean, Dianna [Brittany’s mother] is such an amazing ... she’s just an inspiration. I just had to help my friend. I’m just a messenger,” Keller said.

“It went from, ‘can we find a piece of plywood to pop some balloons on?’ To port-a-potties and bounce houses,” she said, laughing.

“I was reading off the raffle and I thought I would never reach the end,” Leach said.

She said donations were coming in all day long, up until the auction began at 7 p.m.

Keller said the dollar amount she thought they raised at the event quadrupled when it was counted.

“God had his hand in it, is all I can say. I worked with some awesome ladies, and I mean to tell you they were — everybody was just great.

“This has really gotten me, and I look at Dianna and I wish that I can be just a quarter of the good person that she is on the inside. Her and Gary [Brittany’s father], that whole family, they are just so great.”

Organizers of the event said they would like to thank everyone who came together in a team effort to help Brittany. They also wanted to thank Rio Vista Volunteer Fire Department for the use of their engine bays and their kitchen, where event volunteers spent seven hours cooking and feeding attendees.